"The time has come," the Walrus said, "To talk of many things: Of shoes--and ships--and sealing-wax-- Of cabbages--and kings-- And why the sea is boiling hot-- And whether pigs have wings." 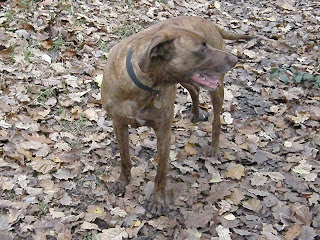 Mr B Baggins taken in the woods this afternoon just before the heavens opened and we both got wet through:) This is specially for GreenTwinsMummy. 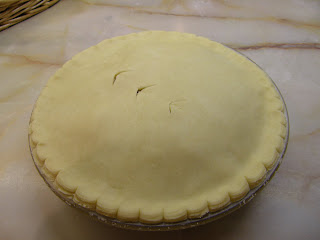 Life has been incredibly busy recently hence the lack of posts, I have been trying to get the better of an enormous mountain of apples and have been making lots of apple pies........... 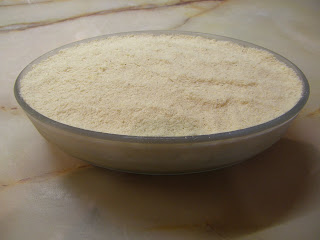 ....and apple crumbles. They both look pale and interesting because they are ready for the freezer and I freeze them unbaked. I'm about to start cooking for Christmas now but shan't be doing as much as usual as we shall be having a fairly quiet time this year. Neil,Francesca and Gabriel are going down to Suffolk over Christmas. One of Cesca's brothers is in the Metropolitan police and only gets leave one Christmas in four and this year is it. He's a very doting uncle so I'm glad he'll have chance to spend time with Gabriel. 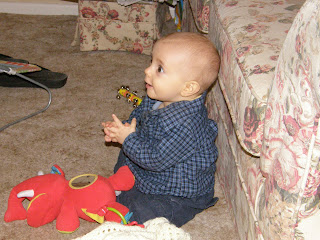 Gabriel visiting Granny and Grandad on Sunday afternoon, he's learnt to clap hands now and is anxious to demonstrate as often as possible:) He does have feet, they are hidden under the pink elephant!
Kaitlyn was here all day yesterday with a bad case of jetlag having flown in from Los Angeles the previous day, I spent most of the afternoon pushing her around the woods in her all-terrain pushchair so that she would sleep as she wouldn't settle in the cot. She seems to have had a good time in the US and there are some lovely photos of her but I don't have copies yet. There is one of a lonely little purple shoe floating in the Pacific Ocean after she fed it to a sealion while they were in Santa Cruz:):) Fortunately she is due for new shoes anyway and has come back with some smart American shoes with a pretty, sparkly lining. 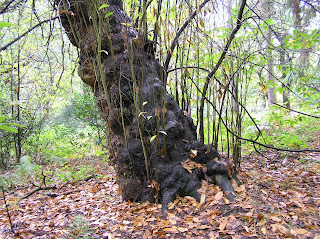 These last two photos are here simply because I love them, both show the character and individuality of the tree. 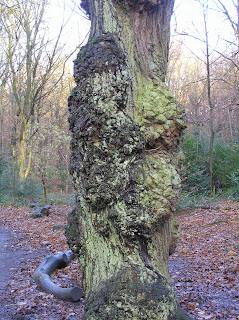 In this one I can see a definite face, many trees have faces if you look for them though they don't always reveal themselves immediately.

It's back to my knitting now as I want to finish the little jacket I'm doing for Gabriel. Strawberry Lane, if you happen to read this and would like the pattern for the mittens then e-mail me with your snail mail address and I'll send a photocopy of the pattern, they are very simple to do - and quick, I can do a pair in one evening.
Posted by Rowan at Friday, November 23, 2007 26 comments: 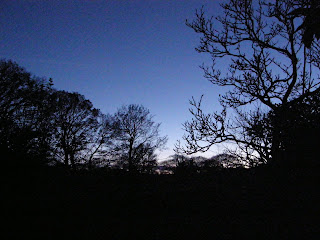 Life has been particularly busy during the last few days so I haven't had time to post, this is just a very short one mainly so that we can move on from Remembrance Day. One of the comments on the photos of me when I was young amused me - Kelli remarked on how tall I am which just goes to show what a difference the style of your clothes can make, in fact I was only 5' 3" tall and now I can only muster 5' 2" even when I stand as straight as I can:) The Empire line of the dress I wore as a bridesmaid is very good for making small women look taller. 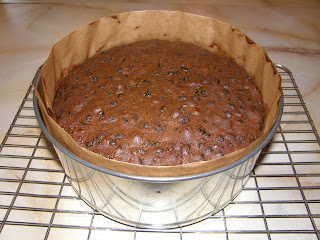 I'm beginning to move into Christmas mode now and have started buying some presents and writing a few cards each day. 5 or 6 a day doesn't take long and by the end of November I shall have them all ready for posting when the time comes - this way the 80+ cards that I send doesn't involve all that much effort. L and I both have large extended families along with all the friends and colleagues that we have acquired over the years and almost all these people live outside the area where we are. On Saturday I made the Christmas cake which is in the photo above. It's now wrapped in clingfilm and sitting in a tin waiting for the end of November when 2 more tablespoons of sherry will be added to it. 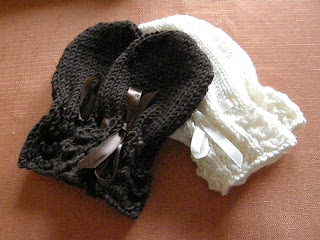 I've been knitting for Gabriel too and forgetting to photograph most of it, I've produced a couple of little retro 'flying' helmets, several pairs of bootees and over the weekend I started fulfilling the request for mittens.

I've had my friend S here from Cheshire today and the bit of spare time I have had to be used for either a blog post or the press report on last night's WI meeting - no contest! I'll do the press report in the morning when my mind is functioning a bit more clearly:)
Posted by Rowan at Tuesday, November 13, 2007 32 comments: 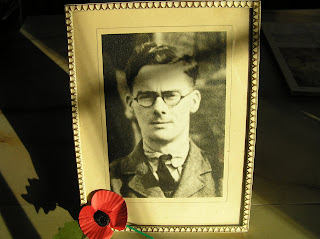 Remembering all those who have given their lives in war enabling those of us who came after to live in freedom and peace. 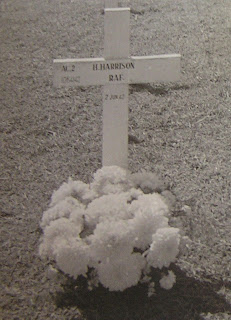 A corner of a foreign field.
The grave of AC2 Harold Harrison in Jakarta War Cemetery, Java. 2 June 1942

If I should die, think only this of me:
That there's some corner of a foreign field
That is for ever England. There shall be
In that rich earth a richer dust concealed;
A dust whom England bore, shaped, made aware,
Gave, once, her flowers to love, her ways to roam,
A body of England's, breathing English air,
Washed by the rivers, blest by suns of home.

And think, this heart, all evil shed away,
A pulse in the eternal mind, no less
Gives somewhere back the thoughts by England given;
Her sights and sounds; dreams happy as her day;
And laughter, learnt of friends; and gentleness,
In hearts at peace, under an English heaven.

JulieMarie asked where the lines at the beginning of this post come from - they are from a poem written in 1914 by Laurence Binyon after the battles of Mons and Le Cateau where the British casualties were very heavy. The lines I quote are always said at the Royal British Legion Festival of Remembrance which the Queen and all the members of the Royal Family attend on the Saturday night preceding Remembrance Sunday and at nearly all the services held at cenotaphs across the UK. Below is the poem in full.

With proud thanksgiving, a mother for her children,
England mourns for her dead across the sea.
Flesh of her flesh they were, spirit of spirit,
Fallen in the cause of the free.
Solemn the drums thrill: Death august and royal
Sings sorrow up into immortal spheres.
There is music in the midst of desolation
And a glory that shines upon our tears.
They went with songs to the battle, they were young,
Straight of limb, true of eye, steady and aglow.
They were staunch to the end against odds uncounted,
They fell with their faces to the foe.
They shall grow not old, as we that are left grow old;
Age shall not weary them, nor the years condemn.
At the going down of the sun and in the morning
We will remember them.
They mingle not with laughing comrades again;
They sit no more at familiar tables of home;
They have no lot in our labour of the day-time;
They sleep beyond England's foam.
But where our desires are and our hopes profound,
Felt as a well-spring that is hidden from sight,
To the innermost heart of their own land they are known
As the stars are known to the Night;
As the stars that shall be bright when we are dust,
Moving in marches upon the heavenly plain,
As the stars that are starry in the time of our darkness,
To the end, to the end, they remain. 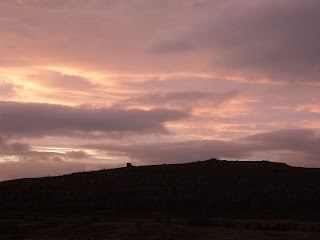 Late this afternoon I drove out towards Grindleford and stopped to take these views in the fading light, the sun had already dropped below the horizon and this was the aftermath but looking northish. 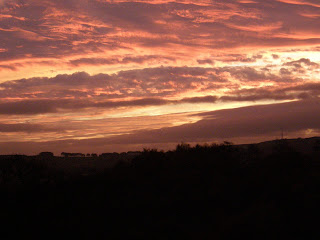 This was from the same spot but looking east. 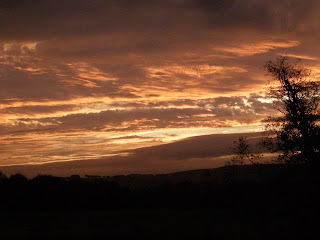 Looking east again but 5 minutes or so later and a little further down the road. I love the way that the sky changes so much in such a short time and as the days get shorter I'm hoping for ever more spectacular sunsets to photograph. 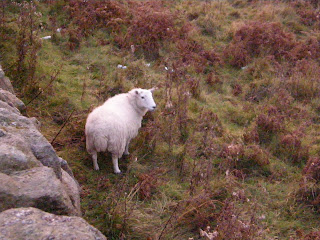 An interested spectator on the other side of the wall:) The difference in light levels is accounted for by my using the 'sunset' setting on my camera for the sky pictures and 'available light' for the sheep. 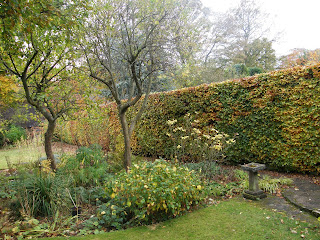 Finally a picture of my beech hedge and the evidence that my garden is seriously in need of some attention which it will hopefully get over the next couple of weeks. I love the hedge when it has this wonderful patchwork quilt effect.
JulieMarie asked what the green and brown 'thingy' was in my last post - it's a newly fallen sweet chestnut showing the open case with the nuts still in place. Sweet chestnuts are edible and can be made into stuffing among other things. I don't think the squirrels bother with the haute cuisine bit though - they just take them as they come:)

Last year I wrote a post about November which hopefully might make those of you who consider it a dreary month see it from a different angle.
Posted by Rowan at Thursday, November 01, 2007 27 comments: