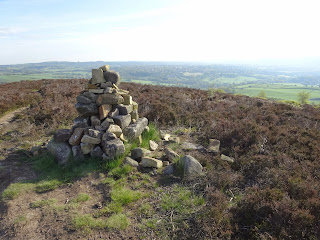 This morning B Baggins and I tried a different walk though we were still on Blackamoor. A winding upward path eventually brought us to this cairn, I'm not sure exactly where we were but it might have been the top of Bole Hill - on the other hand it might not! Either way there was a wonderful view. I added another stone to the cairn and then carried on down the other side of the hill. 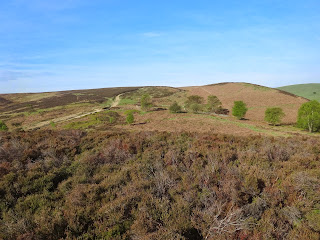 Eventually we came down onto the track that you can see in the photo and turned right walking up onto the moorland proper, it was obviously very boggy at the sides of the track and I wouldn't have cared to step off it! B Baggins was on a lead along here as there are a lot of ground nesting birds on the moors at this time of the year. 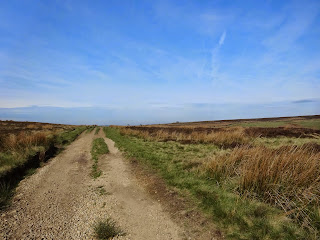 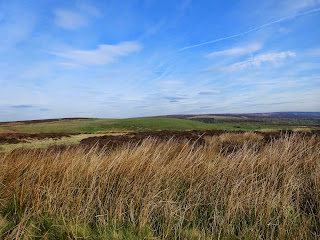 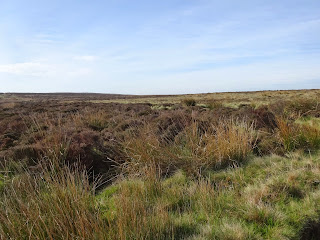 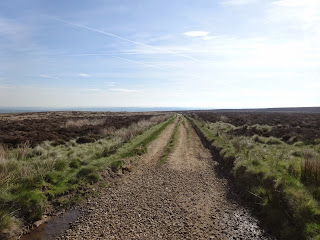 ...and looking back the way we've come. This is Totley Moor, a bleak place in winter or bad weather and dangerous too. In times past before the turnpike roads you needed a guide to cross these moors and many people met their deaths in snowstorms or by wandering off the tracks in mist and fog. This track carries on to Stony Ridge which was farther than I wanted to go so eventually we turned round and retraced our steps. There are lots of skylarks up here and I watched and listened as one rose so high in the sky that finally all I could see was a small black dot. 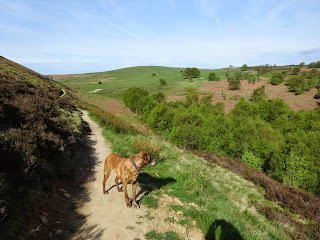 We reached a place where we turned off the main track and followed this little path round the side of the hill and into a friendlier looking scene where B Baggins was able to run free again for a while. 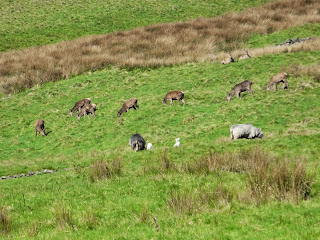 Once through the gate at the end of the track he had to go back on the lead as there were lots of sheep and lambs around.Even more exciting was this herd of red deer coming down off the high pasture. They were quite a distance off and this photo was taken with a 20x zoom. 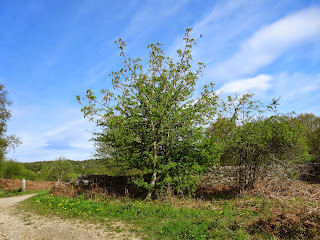 We turned right and followed the drystone wall to another gate where we turned right again and followed the rough, stony track down to familiar territory where I heard a cuckoo calling. This is Lenny Hill where we walk most days, the little group of trees are special friends - a hawthorn, a young horse chestnut and a wild rose. What the horse chestnut is doing up here I have no idea, I think it must only have managed to survive because of the protection given to it by the hawthorn. 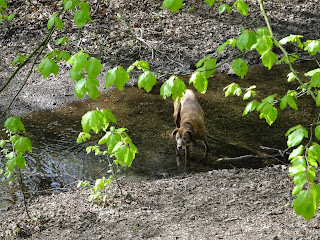 We turned right again and walked down Strawberry Lee Lane, halfway down B Baggins stopped at Lee Syke for a welcome drink and paddle, this little stream joins Blacka Dyke further down the hill and they in turn join Oldhay Brook which eventually joins with the Totley Brook to form the River Sheaf, one of Sheffield's five main rivers. Then it was home for breakfast at the end of a lovely walk that I shall definitely be doing again.
Posted by Rowan at Monday, May 05, 2014 24 comments:

Beltane - Bringing In The May 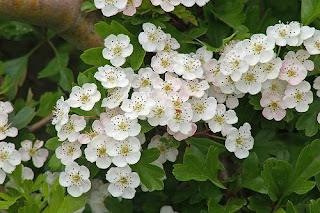 Today is Beltane, the first day of the Celtic summer and the celebration of the longer,warmer days and the fertility of the earth which is visible all around us. Beltane/May Day has been celebrated in English villages for centuries by the 'Bringing in of the May' which meant not only the month of May but also the beautiful white hawthorn or May blossom. This was gathered on May Eve and used to decorate the doors of all the houses in the village. The lovely blossoms were also made into garlands - this is the origin of the old nursery rhyme 'Here we go gathering Nuts in May'. The 'nuts' were knots of hawthorn blossom. There were boisterous games, feasts, bonfires and Maypole dancing and a great many other rather more private celebrations in the local woods which frequently resulted in an increase in the village population nine months later! All this frivolity came to a grinding halt in 1644 when Oliver Cromwell and his Puritan government - never ones for allowing people to have a good time if they could prevent it - banned maypoles and all the other May Day celebrations. Some of us in England may be thinking that there wouldn't be much May blossom to gather this morning but that is because in 1754 we lost 11 days when the Gregorian calendar was introduced and September 2nd was immediately followed by September 12th. May Day would originally have fallen on what is now May 12th when the May blossom would be in full bloom. 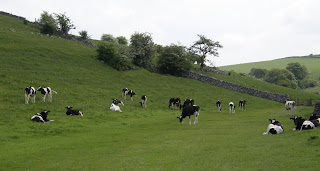 Beltane is one of the major fire festivals of the year and the ancient Celtic people released their cattle from winter confinement on this day and drove them between two great fires to purify them and they were then taken to their summer pastures. 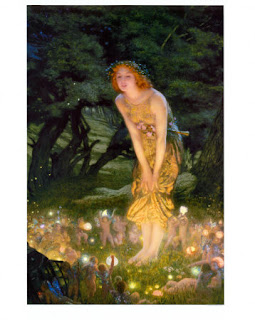 As at Samhain the veil between the worlds is thin but rather than the spirits of the dead it is the fairy people who conduct their revels on May Eve. If you sit beneath a hawthorn tree on this night, you may hear the sound of bells as the Queen of the Faeries rides by on her snow white horse searching for mortals to lure away. Take care to hide your face for if she sees you then it may be you that she steals away and carries back to Tir Nan Og.... 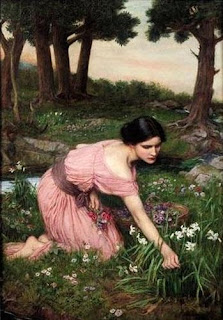 This is a beautiful and very ancient Gaelic poem dating back to at least the 10th century. The poet's name is lost in the mists of time but legend has it that it was the great Gaelic warrior king Finn McCuill who wrote it.

May, clad in cloth of gold,
Cometh this way;
The fluting of the blackbirds
Heralds the day.

The dust coloured cuckoo
Cries welcome O Queen!
For winter has vanished,
The thickets are green.

Soon the trampling of cattle
where river runs low!
The long hair of the heather,
The canna like snow.

Wild waters are sleeping,
Foam of blossom is here;
Peace, save the panic
In the heart of the deer. 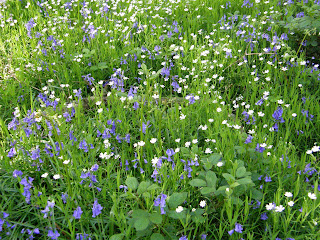 The wild bee is busy,
The ant honey spills,
The wandering kine
Are abroad on the hills.

The harp of the forest
Sounds low, sounds sweet;
Soft bloom on the heights;
On the loch, haze of heat.

The waterfall dreams;
Snipe, corncrakes, drum
By the pool where the talk
Of the rushes is come.

The swallow is swooping;
Song swings from each brae;
Rich harvest of mast falls;
The swamp shimmers gay.

Happy the heart of man,
Eager each maid;
Lovely the forest,
The wild plane, the green glade. 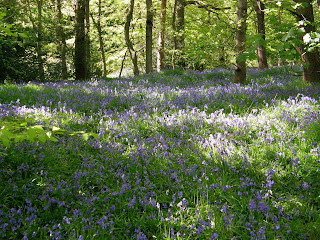 Truly winter is gone,
Come the time of delight,
The summer truce joyous,
May, blossom-white.

In the heart of the meadows
The lapwings are quiet;
A winding stream
Makes drowsy riot.

Race horses, sail, run,
Rejoice and be bold!
See, the shaft of the sun
Makes the water-flag gold.

I originally posted this in 2009 so decided to give it another outing today as I don't have time to research a new post for Beltane. It's pouring with rain so not exactly the perfect May Day morning but hopefully things will be better on May 12th - Old May Day:)
Posted by Rowan at Thursday, May 01, 2014 11 comments: