The Flower Fairy books by Cicely Mary Barker are among my favourite children's books because of their delicate paintings of flowers and trees. They are a lovely way to help children learn about the natural world although the poems that accompany the paintings aren't exactly great literature:) I still have Flower Fairies of the Summer, Flower Fairies of the Wayside and A Flower Fairy Alphabet from my daughter's childhood so I thought I would complete the set gradually. Flower Fairies of the Spring seemed the appropriate one to begin with and it seems to have done the trick as the day it arrived the weather began to warm up:) The painting on the cover is of The Crocus Fairies. 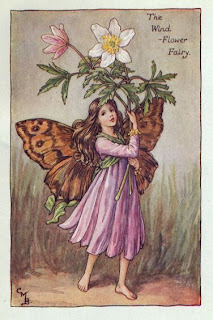 The Windflower Fairy is one of my favourites from the Spring book partly because it's a lovely painting and partly because I love seeing the wood anenomes appear, they are always among the earliest of the woodland flowers along with the celandine. Windflower is the country name for the wood anenome. In the last couple of days there are suddenly sheets of them in Ecclesall Woods where at the beginning of the week there was no sign of them at all. 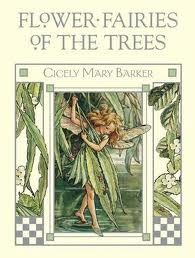 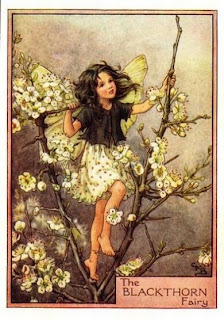 Another of my favourites is the Blackthorn Fairy - she should shortly be appearing in our hedgerows bringing with her the blackthorn winter. The blackthorn blossom comes before the leaves and makes it look as though the shrubs are covered in snow. The old countrymen believed that it also brought with it a spell of cold weather - I hope that isn't the case this year as I think we've had sufficient cold weather during this Spring! 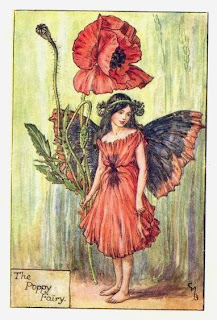 My final offering looks forward to the hot, sunny (hopefully )days of summer when we shall be seeing the Poppy Fairy in the fields - not a favourite with the farmers perhaps but definitely a favourite of mine.
Posted by Rowan at Thursday, April 18, 2013 18 comments: 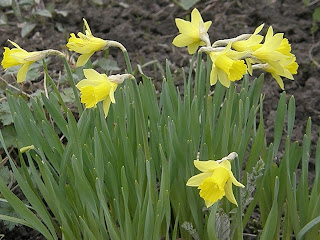 Spring is sudden: it is her quality,
However carefully we watch for her,
However long delayed
The green in the winter'd hedge
The almond blossom
The piercing daffodil,
Like a lovely woman late for her appointment
She's suddenly here, taking us unawares,
So beautifully annihilating expectation
That we applaud her punctual arrival. 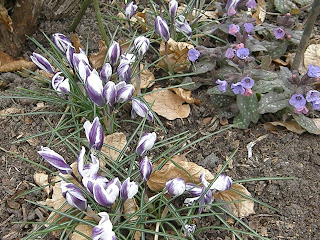 Spring certainly is long delayed this year,by the end of March last year the blackthorn was in full bloom and there were wood anenomes, celandines and the first of the bluebells in flower. It's a completely different story this year, the buds on the blackthorn on Blackamoor are still tightly shut and in Ecclesall Woods although the green spikes of bluebell leaves are pushing through there's no sign whatever of the windflowers and celandine. However I can offer you the first of the 'piercing daffodil' I have just two or three groups of the smaller daffodils flowering giving some hope that Spring might not be far away. The crocus' are still flowering well but the light is poor today so they have declined to open up fully. 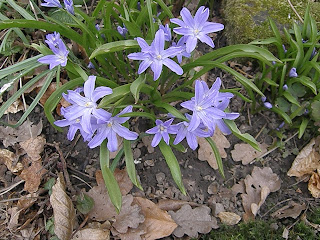 Another tiny splash of colour comes from a little group of chionodoxia, the blue is much more intense than it appears in the photo. 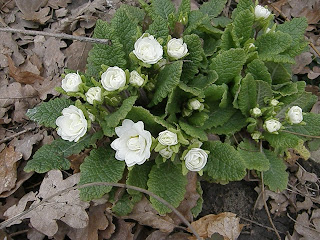 My ordinary yellow primroses are just starting to flower but the named varieties are further on, this one os a white double called 'Dawn Ansell'. 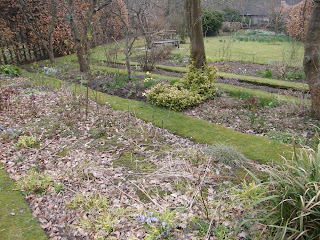 My garden is a complete shambles though not quite such a shambles as it was a couple of weeks ago. Due to being in Suffolk until early October and then a very wet autumn I did very little indeed at the end of last year, normally I'd expect to be able to work in my garden until well into December. The photo shows a scene of before and after, I work from the bottom up towards the house so the worst part is most obvious from the french windows and doesn't allow me to pretend it isn't there! Of course all the dead leaves will be falling off the beech hedges any time now so there will be no resting on my laurels even when I do finally cross the finishing line! 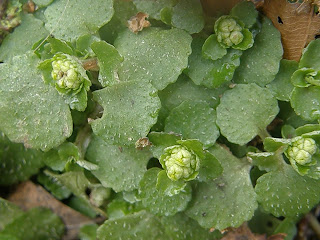 Up on Blackamoor the scene is even more dead looking than my garden but finally yesterday I spotted two brave little plants peeping through, this is golden saxifrage which grows in damp areas and has pretty yellow flowers when the buds eventually open and..... 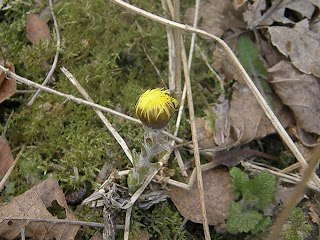 ..... further up the path I was delighted to see the first of the coltsfoot pushing through though they too remain tightly furled. 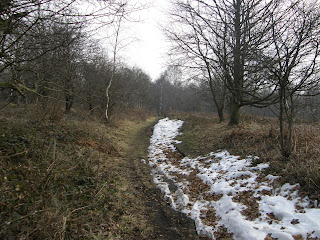 This is why they are so reluctant to flower -  it's still very cold up on Blackamoor! B Baggins and I walked up to Piper House Gate and across the top path to Devil's Elbow yesterday morning and there are still some patches of snow here and there. 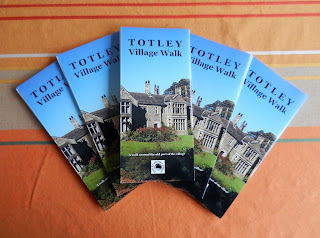 So here I am, out of hibernation again:) Thank you for the kind enquiries as to my well being, there's been nothing wrong, just a general lethargy and lack of inspiration due to the grey skies and freezing temperatures.
I've been busy in other directions though, the village walk leaflet that my friend P and I have written has been published and proved to be very popular indeed - we wish we'd had more printed now! 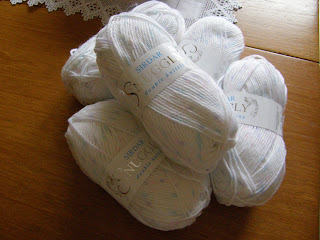 I suspect I'm going to be even busier in the months to come! Apart from various outings and a new local history project that P and I have begun and the transcription I'm going to do of our local school's admission registers I'm also going to be doing quite a lot of knitting. I've just bought some yarn ready to knit another one of these...... 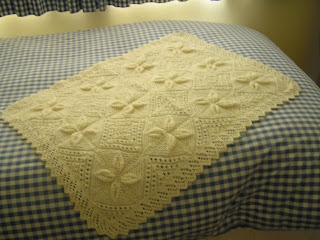 .....those of you who have been with me for some time may recognize this. I've knitted four of them so far, one for each grandchild.I'm about to begin on a fifth one as Gabriel and George will be having a new brother or sister in the summer. Although I'm already sure which the baby will be I've backed the horse both ways with the new yarn as it has both pink and blue flecks in it:)
Posted by Rowan at Thursday, April 11, 2013 21 comments: