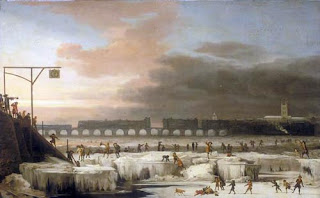 The Frozen Thames by Abraham Hondius

The frozen River Thames painted in 1677 The view is probably from Old Swan Stairs looking east with old London Bridge in the middle distance, and the tower of St Olave's Tooley Street just visible, and Southwark Cathedral on the right. Old London Bridge with its shops and houses and many supporting piers is no longer there, the shops and houses were dismantled around 1760 and the remainder was demolished in the 1830s when it was replaced by the New London Bridge. Even that is no longer there, it was sold to the American Robert P McCullogh in 1967, dismantled and shipped across the Atlantic to be rebuilt in Arizona! The London Bridge in the painting is the one referred to in the old nursery rhyme 'London Bridge is Falling Down'. 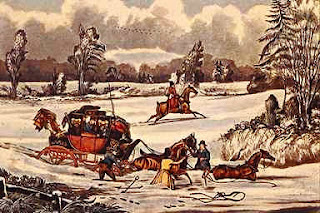 The news recently has been full of the usual media hype about coldest winter for 20 years etc etc and most of us have probably seen sufficient snow to last us a while but really what we have seen is nothing compared to winters in the past. We are all familiar with the Christmas card scenes of stage coaches battling through huge snowdrifts. Travelling in one of these coaches in winter must have been appalling, there was no heating unless you were fortunate (and wealthy!) enough to have a footwarmer and for those hardy souls who travelled outside there was no shelter either. 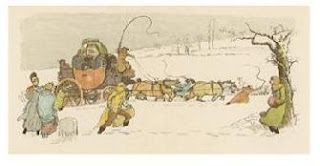 Getting stuck in snowdrifts was a very real possibility in those days when winters were very much colder than they are now. Can you imagine having to get out, probably already half frozen, and stand in the biting cold to lighten the load while the coachman and guards tried vainly to get the coach out of the snowdrifts? 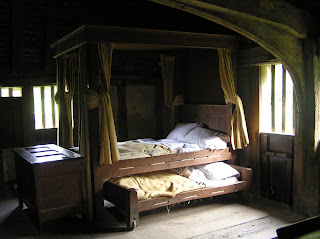 I think we've all probably had a bit of a giggle at old pictures of men and women wearing nightcaps but if you'd been sleeping in the bedroom in the photo you'd have been very glad to wear one yourself. There is no glass in the windows of this well to do yeoman farmer's house, wooden shutters would be put over them and that would be it. The bed curtains were there for a reason not just to look pretty! 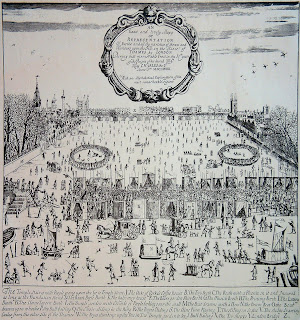 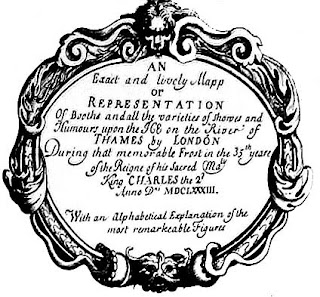 From the mid 1300s until well into the 1800s there was a Little Ice Age in Europe and the winters were very severe. On many occasions during this period the River Thames in London froze over completely. In 1536 Henry Vlll travelled by sleigh along the River Thames from Whitehall to Greenwich a distance of about 6 miles. His daughter Queen Elizabeth l skated and practiced archery on the frozen river in 1564 but things really started to get interesting in 1683 when the first Frost Fair was held. The diarist John Evelyn wrote
"Coaches plied from Westminster to the Temple, and from several other stairs too and fro, as in the streets; sleds, sliding with skeetes, a bull-baiting, horse and coach races, puppet plays and interludes, cooks, tipling and other lewd places, so that it seemed to be a bacchanalian triumph, or carnival on the water"

The stairs referred to are the steps leading down to the river where people boarded the boats which were used in much the same way as taxis are now. The Thames watermen were the London taxi drivers of their day.

Another anonymous eyewitness wrote
"On the 20th of December, 1683, a very violent frost began, which lasted to the 6th of February, in so great extremity, that the pools were frozen 18 inches thick at least, and the Thames was so frozen that a great street from the Temple to Southwark was built with shops, and all manner of things sold. Hackney coaches plied there as in the streets. There were also bull-baiting, and a great many shows and tricks to be seen. This day the frost broke up. In the morning I saw a coach and six horses driven from Whitehall almost to the bridge (London Bridge) yet by three o'clock that day, February the 6th, next to Southwark the ice was gone, so as boats did row to and fro, and the next day all the frost was gone. On Candlemas Day I went to Croydon market, and led my horse over the ice to the Horseferry from Westminster to Lambeth; as I came back I led him from Lambeth upon the middle of the Thames to Whitefriars' stairs, and so led him up by them. And this day an ox was roasted whole, over against Whitehall. King Charles and the Queen ate part of it."
It's worth clicking on the wonderful woodcut to see the detail, all the action is taking place on the frozen river and at the top is London Bridge. 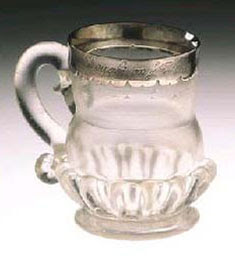 This lovely little mug is a souvenir of the first Frost Fair and is now in the Victoria and Albert Museum. It is just two and a half inches high and has engraved on the base 'Bought on ye Thames ice Janu: ye 17 1683/4'
In case you are wondering why it says 1683/4 it is because until the year 1752 the New Year officially began on 25th March although many people considered January 1st the first day of the New Year. Thus between Jan 1st and March 25th the date was always written using both years. 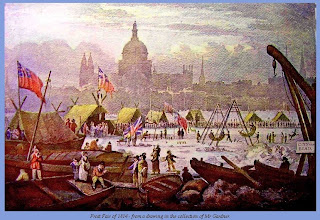 The Frost Fairs continued to be held whenever the Thames froze until the early 19th century. The last one was held in 1814 - an elephant was led across the river to demostrate the safety of the ice! In the mid 1800s the Thames Embankment was built which involved reclaiming the marshes and building out over the foreshore of the river. As a result the Thames became narrower and deeper. Old London Bridge, whose piers had slowed the flow of the river and enabled ice to build up, was demolished and the climate started to become warmer and these three things combined to bring an end to the Frost Fairs.

Behold the Liquid Thames frozen o’re,
That lately Ships of mighty Burthen bore
The Watermen for want of Rowing Boats
Make use of Booths to get their Pence & Groats
Here you may see beef roasted on the spit
And for your money you may taste a bit
There you may print your name, tho cannot write
Cause num'd with cold: tis done with great delight
And lay it by that ages yet to come
May see what things upon the ice were done


My son and his family have landed safely in South Africa and will now be enjoying rather different temperatures to those we have here. We mustn't grumble though - things could be a lot worse!!
Posted by Rowan at Wednesday, January 13, 2010 24 comments: 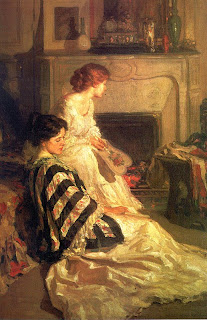 Now stir the fire, and close the shutters fast,
Let fall the curtains, wheel the sofa round,
And, while the bubbling and loud-hissing urn
Throws up a steamy column, and the cups,
That cheer but not inebriate, wait on each,
So let us welcome peaceful ev'ning in. 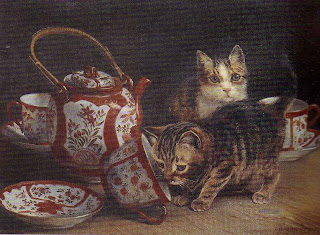 Oh winter, ruler of th' inverted year,
Thy scatter'd hair with sleet like ashes fill'd,
Thy breath congeal'd upon thy lips, thy cheeks
Fring'd with a beard made white with other snows
Than those of age, thy forehead wrapp'd in clouds,
A leafless branch thy sceptre, and thy throne
A sliding car, indebted to no wheels,
But urg'd by storms along its slipp'ry way, 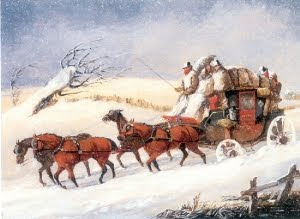 I love thee, all unlovely as thou seem'st,
And dreaded as thou art! Thou hold'st the sun
A pris'ner in the yet undawning east,
Short'ning his journey between morn and noon,
And hurrying him, impatient of his stay,
Down to the rosy west; but kindly still
Compensating his loss with added hours
Of social converse and instructive ease, 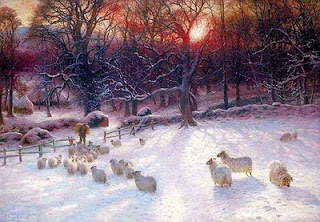 And gath'ring, at short notice, in one group
The family dispers'd, and fixing thought,
Not less dispers'd by day-light and its cares.
I crown thee king of intimate delights,
Fire-side enjoyments, home-born happiness,
And all the comforts that the lowly roof
Of undisturb'd retirement, and the hours
Of long uninterrupted ev'ning, know.

I am a bear of very little brain this morning so I'm cheating a little by posting yet another poem with some paintings as illustrations. Not very inspired I'm afraid but the cold I'm currently dosing with elderberry rob seems to have deprived me of the power of coherent thought! I shall try and produce something better during the coming week. For now it's on with knitting a nice warm jumper for Gabriel I think. Stephen and his family are on their way to Heathrow at the moment - problems with the non arrival of visas meant they didn't travel last week and their flight now leaves on Tuesday evening. They are going down today and staying two nights in a hotel at Heathrow to be sure of actually getting there, having had to rearrange the flights once they don't want to find that the snow prevents them from getting to the airport. We are apparently due for another lot of snow later today up here in what is currently the Frozen North and I suspect that it might be slow going on the M1 and the M25 today as they were forecasting heavy snow for the southern counties last night. Never mind, every day is another day nearer to Spring and scenes like this! 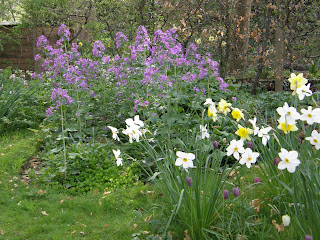 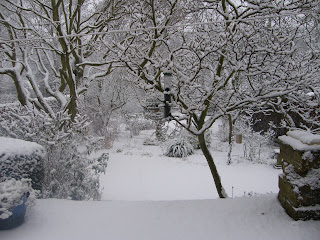 Just a very quick post to wish everyone a very Happy New Year. We have had snow again overnight and my garden was looking rather better under its blanket of snow than it does when the snow isn't there! I have a lot of work to do out there once Spring appears. Even now there are tiny signs, in spite of the bitter cold (20F overnight) there are snowdrops and crocus tommasinianus already peeping through. I am feeding the birds even more than I usually do and yesterday, in addition to the regular goldfinches, blackcap, long-tailed tits and other regulars, we had three bullfinches on the feeders - two females and a spectacularly handsome male. I hope they will stay around. As well as seeds, nyger seeds(the reason for all the goldfinches!)and fat blocks I'm also putting out dried fruit, grated cheese and meal worms. Wild creatures suffer badly in these freezing conditions and need all the help we can give them. My reward in the summer is that I have a pretty pest free garden. 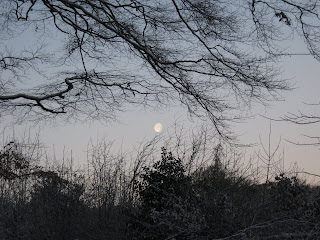 When I took Bilbo Baggins out this morning the waning moon was just setting and made a lovely picture through the branches. 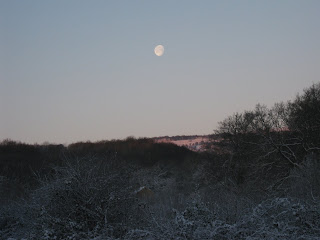 This is looking to the west and you will probably need to click on the photo to see the reflection of the rising sun turning the snow covered moors a faint pink. 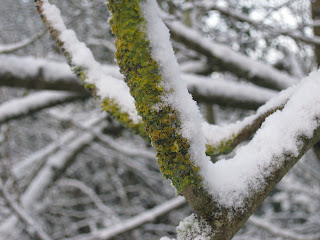 Another small touch of colour amongst all the black and white, the acid yellow of lichens on this tree.

I'm hoping to be back to posting and commenting more regularly after next weekend, my son and his family leave for South Africa on Wednesday and my younger son and his family will be up here from Friday until Sunday and then life should become a little quieter during the cold winter months.
Posted by Rowan at Sunday, January 03, 2010 34 comments: