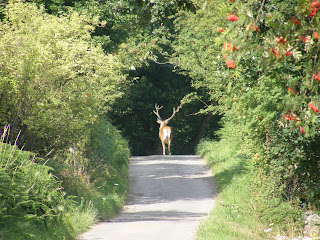 I've been absent from the blogging world for a while but it's simply because I've been so busy. This is just to catch up with one or two things that have been happening over the last few weeks, there has been a great deal of working on my garden which is now looking at least reasonably under control. There's also been a lot of walking with B Baggins when we've had several sightings of deer including this stag who suddenly appeared on the lane in front of us and was trotting away before I could get a good photo. 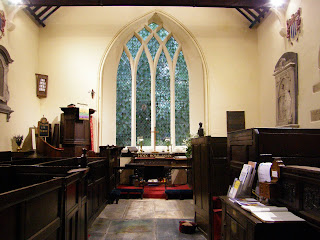 There have been several outings with both Time Travellers and Totley History Group including a visit to Beauchief Abbey. The church that is there now was originally part of the Abbey church. After the Reformation the Abbey was aquired by Sir Nicholas Strelley and it remained in this family until 1923. It was converted into a private chapel in 1662 and the interior has hardly altered since then.The pulpit, pews and altar table are all the original 17th century fittings. It deserves a post to itself which I'll do at some point when life is less hectic. Clicking on the photo will enlarge it so that you can see more detail. 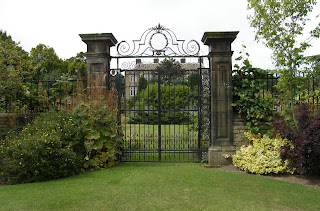 We also had the once in a life time chance to go behind these gates and explore the 17th century Beauchief Hall which, after decades as a hotel and then offices has now been bought by someone who plans to restore it sympathetically and live in it as a private home again. 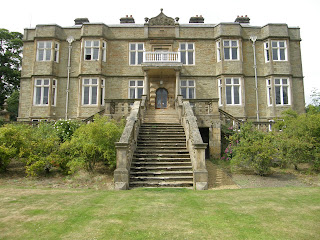 This is the front of the Hall with steps leading down from a lovely stone terrace into the garden which doesn't look very inspiring from this angle..... 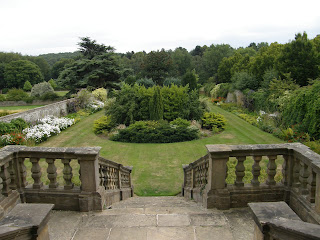 .....but it's actually a lovely walled garden which has been well maintained. 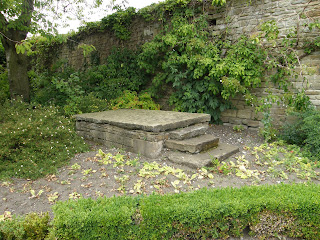 Just to one side of main entrance is this wonderful stone mounting block. 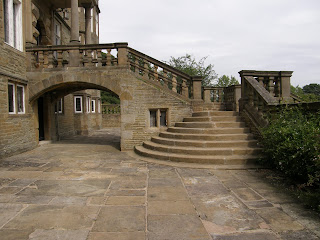 I loved these curved steps leading down from the terrace, the archway on the left is where carriages would have driven through, the family and their guests would have then have gone up the steps to the main entrance. The doorway to the left led to the kitchens, servants hall etc. It was really great to be able to wander all over the house and explore at our leisure. It required a degree of imagination in many areas which is why there are no interior photos as they wouldn't have been very inspiring. 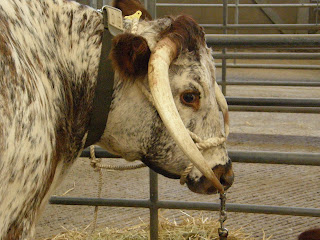 Then of course there was two days at Bakewell Show in early August, with my friend J (the countrywoman) on Wednesday and then on Thursday L (the shopping queen) came with me. J and I always go and see the cattle first and we are invariably the only people there apart from the farmers. We got a close up of this lovely English Longhorn which is a very ancient breed originating in the north of England. 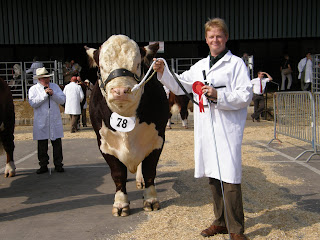 J and I picked this handsome Hereford bull as a winner as soon as we saw him and here he is with his proud owner. 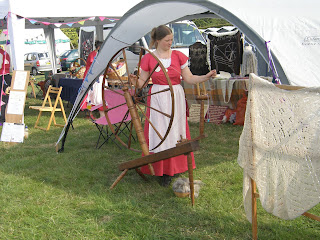 Diane and her family are at Bakewell every year demonstrating spinning and J and I always go and see them. Hopefully this winter we'll be getting some lessons from Diane - J and I both have our own spinning wheels now. Mine is purely decorative so far! 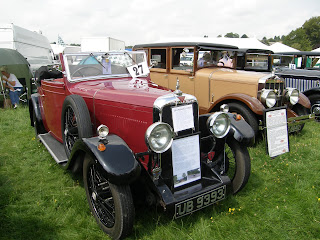 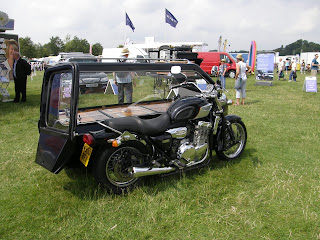 This was one of the more unusual exhibits - not quite the vehicle I'd envisaged for my final journey! 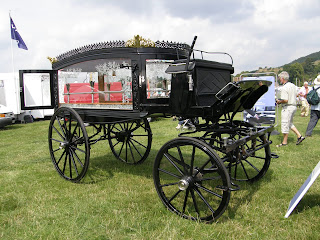 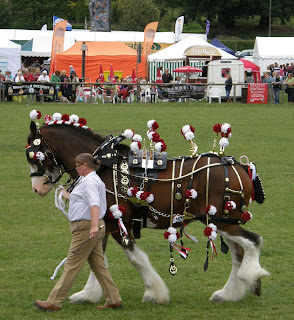 The heavy horses are always my favourites, this one was in the decorated harness class, in the 19th century the horsemen took great pride in decorating their working horses for special occasions. 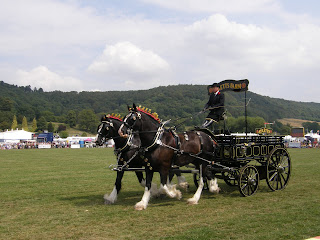 There are more entries in the heavy horse classes in recent years, it's good that they are also being used more for logging in woodland areas where they do far less damage than tractors. 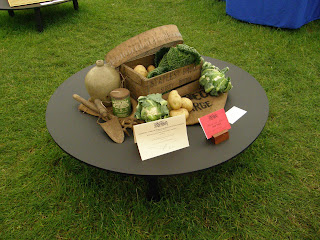 For once I actually agreed with the judges - the title of this class was 'Still Life' and I think that this was perfect. 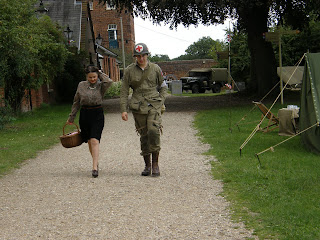 I was in East Anglia over the August Bank Holiday weekend staying with my son and his family. I don't know quite whether to say I was in Suffolk or Norfolk as they literally live on the border of the two counties. On the Sunday we went to Gressenhall Farm and Workhouse where they were having a WW2 'Village at War' weekend. 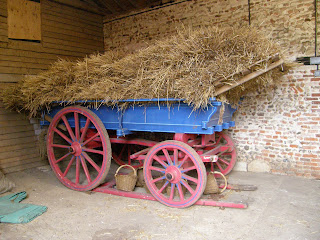 Another favourite thing - I love these old hay wagons. 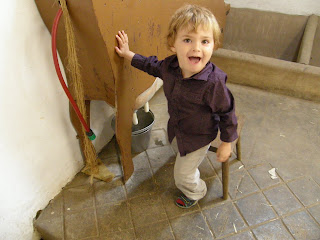 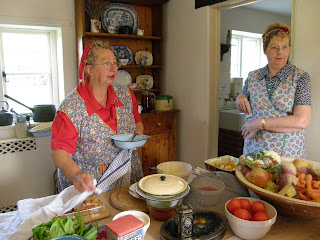 This was absolutely right down my street, the farmhouse kitchen being used to demostrate wartime cookery. If you enlarge the photo you'll be able to see the remains of the infamous 'Woolton Pie' on the table at the back on the right. The lady in the pink blouse told me that it's really nice and that she often cooks it at home for her family. I plan to have a go at it this autumn. 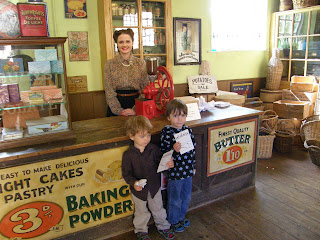 When we bought our tickets (which were like Identity Cards)the boys were given a 'ration book' so that they could go to the village shop and collect their 'sweet ration'. They are looking rather bemused about the whole thing but it took me back to when I was a little girl - I remember clearly going shopping with my mum and having the ration book with us. Sweets didn't come off the ration until I was 6 1/2 years old. It's worth enlarging this to see the expression on George's face:) 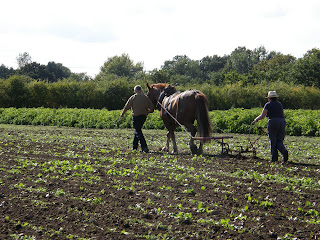 There are three Suffolk horses at Gressenhall and this is one of them working, there was a crop in the field so he may be pulling some sort of hoe? - I wasn't close enough to see and I'm no expert on farm machinery. The Suffolks are my favourite of all the heavy horses. 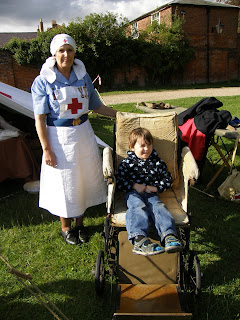 Gabriel trying out the wheelchair and being 'tended' by the VAD nurse - another of the many re-enactors. We had a really brilliant day here and will be going again. 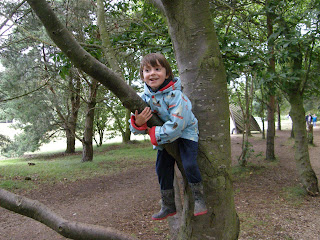 Ever since Neil and Cesca went to live in Suffolk I've been angling for them to take me to Sutton Hoo. What a disappointment! In true National Trust fashion everything was fenced off and the only way to get near the burial mounds was to join a guided tour at a cost of an extra £2.50 each - I'm a member of the NT but we'd already paid £18-50 for Neil and Ces to get in. In any case the boys are too young for guided tours so we didn't want to do that anyway. There was a complete lack of imagination in evidence and it makes me once again question whether I want to belong to the National Trust - it seems to me that it's an organization that is far too full of its own importance. English Heritage is much better! Anyway we didn't stay very long and the only photos I took were of Gabriel climbing a tree and... 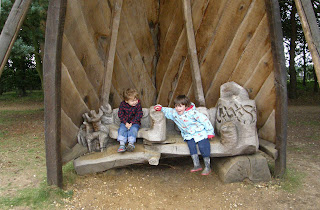 ....this rather splendid carved seat.Wish I'd had the sense to include the whole thing in the photo so that you can see properly the it's shaped like a boat.Anyway Sutton Hoo is somewhere that we shan't be visiting again!

I shan't be around now for the next couple of weeks as my eldest son and his family are over from South Africa and he and my two granddaughters are staying with me while Hannah does the two week residential course at the start of the second year of her Masters Degree. They are over at their other grandparents house today hence the chance to do a post. We are off to Wales for a few days next weekend - first time I've been since Steve was a 6 week old baby. Apparently we are going to be climbing Snowdon!
Posted by Rowan at Sunday, September 04, 2011 24 comments: