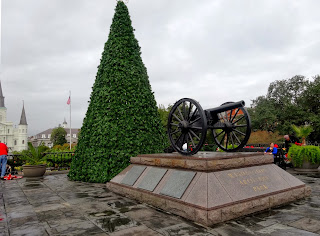 Wednesday was the day for our 4 hour Voodoo Walking Tour of New Orleans. We met our guide Tree by the Civil War cannon in the Washington Artillery Park overlooking Jackson Square. He turned out to be a brilliant guide with a deep knowledge of the history of New Orleans. Voodoo is an intrinsic part of this history, it came to New Orleans along with African slaves and also with exiles from Haiti. From 1719 to 1731, the majority of African captives came directly from what is now Benin, West Africa, bringing with them their cultural practices, languages, and religious beliefs which are rooted in spirit and ancestor worship. Their knowledge of herbs, poisons, and the ritual creation of charms and amulets, intended to protect oneself or harm others, became key elements of Louisiana Voodoo. The people from the area which is now Benin were called the Fon and their word for spirits is Vodoun. 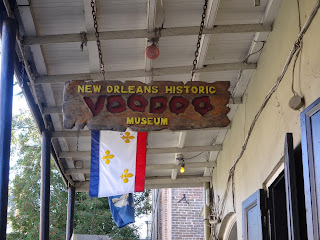 We visited the Historic Voodoo Museum which was founded by Charles Massicot Gandolfo in 1972. His fascination with Voodoo was inspired by the stories told to him by his grandmother who claimed that her great grandfather had been raised in New Orleans by a Voodoo Queen. 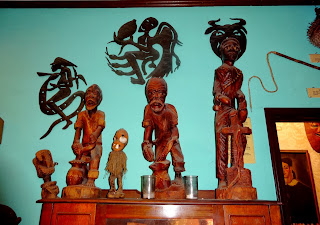 The African influence is very obvious in these carved wooden figures. 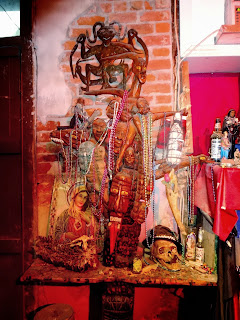 I confess that I found the interior of the Museum both fascinating and unsettling. This Voodoo altar has both Roman Catholic and Voodoo aspects - the beads that are draped everywhere as offerings are Mardi Gras beads. 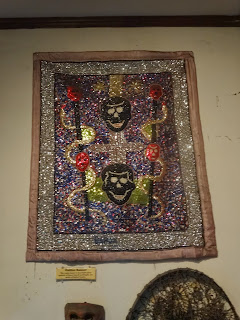 A sequinned banner which is symbolic of Baron Samedi and Maman Brigitte, two Haitian Voodoo Loa or spirits who are connected with death. 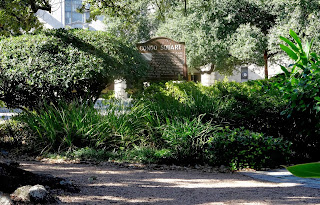 Congo Square is in the vicinity of the area once used by the Houmas Indians, before the arrival of the French colonists, to celebrate their corn harvest. It is most famous however for being the place where the slaves and free people of colour gathered on Sundays to dance,drum,socialize and generally have a good time. It also served as a market place for these people and the slaves could sell goods and crafts here. This enabled many of them to eventually save enough money to buy their freedom.The French and Spanish slave owners had a much more relaxed attitude to their slaves than the British/United States owners did and they were allowed to keep their own beliefs and customs rather than being forced to convert to Christianity. Congo Square lies in the Tremé district of New Orleans just north of the French Quarter. To reach it you have to cross Rampart Street which is divided into North Rampart Street(which divides the Tremé and French Quarter districts)and South Rampart Street. The jazz classic South Rampart Street Parade was named after a real place! 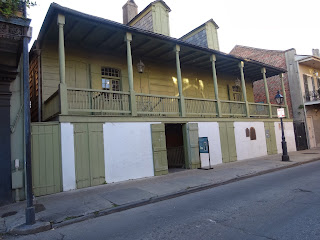 Tree showed us examples of the different styles of architecture in New Orleans. This simple house is on Dumaine Street and is one of the oldest in New Orleans. It was built in 1788/89 in the French Colonial style. The family would live on the upper floor which would be safe from flooding and the wide balcony gave protection from both sun and rain. 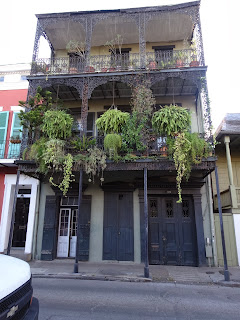 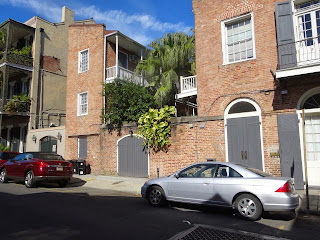 To the right is the home of the slave owner and his family, to the left across the courtyard are the slave quarters. I think they've now been converted to apartments and wouldn't have looked quite so smart when the slaves lived there! 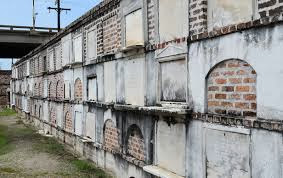 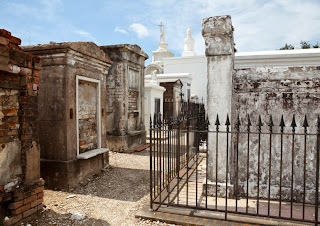 Our walk then took us down towards Basin St and the St Louis Cemetery No 1 which is the oldest cemetery still in existence in New Orleans. The first burials there were in the late 1700s and all the vaults are above ground. This is because it was built on a swamp and has always been vulnerable to flooding. It is incredibly small, claustrophobic and decrepit as these photos show. Attempts are now being made to preserve and restore it but it will be a long and extremely expensive project.This site gives more information about both the cemetery and the organization that is working to preserve this and other old cemeteries in New Orleans. The famous Voodoo Queen Marie Laveau is supposedly buried here, we saw her tomb but there seems to be some doubt as to whether she's actually in there! For some reason I didn't take any photos in the cemetery so I've had to borrow a couple from the internet. I had a new camera and had problems with it throughout the trip hence so many poor photos. 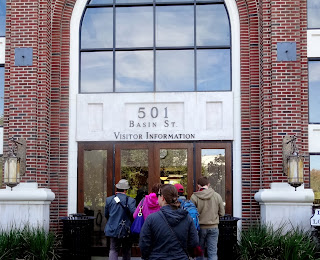 Our last port of call was the former Southern Railway Station on Basin Street which is now a Visitor Centre. I've borrowed the black and white photo from the internet to show how it looked in the early years of the 20th century. This was the area of New Orleans where jazz first flourished. Jelly Roll Morton and many other famous jazz musicians began their careers in the clubs and bars around here. It was also the red light district of New Orleans for many years! Here's the great Ella Fitzgerald singing Basin Street Blues 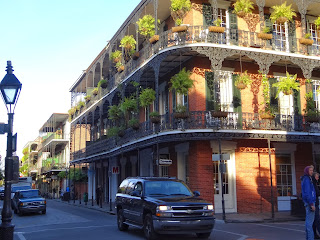 By the time the tour finished it was mid afternoon so we decided to walk slowly back towards Jackson Square exploring some more of the French Quarter as we went. This is Royal Street one of the oldest streets in New Orleans dating back to the French Colonial period. We spent quite a while wandering along here, it's full of lovely antique shops and art galleries as well as being beautiful in itself with all the gorgeous Creole architecture. 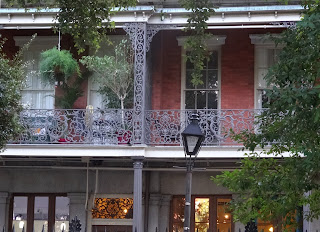 Many of the old Creole buildings have the most beautiful wrought ironwork balconies. This is a section of the Upper Pontalba Building on Jackson Square. You can also see one of the old gas lamps which are all over the French Quarter, I believe they are still lit by gas rather than being converted to electricity. 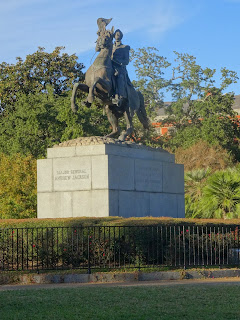 The statue of General Andrew Jackson stands in the centre of the square which bears his name. As I mentioned in an earlier post he was the General who defeated the British at the Battle of New Orleans in 1815. He later became the seventh President of the United States serving from 1829 to 1837. 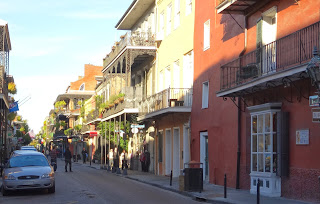 Finally another look at Royal Street. If you enlarge the photo you will see on the wall to the right the sign showing its name in Spanish - Calle Real. And have you spotted the Mardi Gras beads hanging over the gas lamp? From here we headed back to the hotel to put our feet up for an hour before getting ready for another night out on the town again:)
Posted by Rowan at Sunday, February 09, 2014 12 comments: