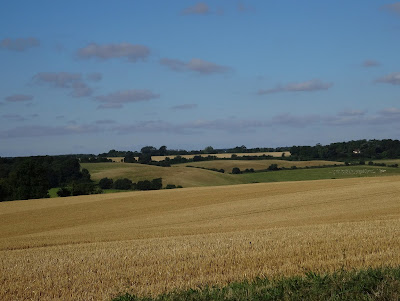 For me August has always been a month of waiting - waiting for the first small signs of autumn. It is the crown of the agricultural year but still it is my least favourite month. I think the only place to really enjoy August is by the sea relaxing on a sandy beach and exploring rock pools or walking along the cliffs. I live quite a long way from the sea and to me this time of year always seems tired as though the Earth Mother is exhausted after the exertions of the spring and summer and, like me, is just waiting for the renewed energy that the autumn brings.
The photo shows the field across the lane from my son's house in Suffolk which has just been harvested and is also waiting. Soon the plough will be turning the stubble and preparing the field for sowing the next crop. 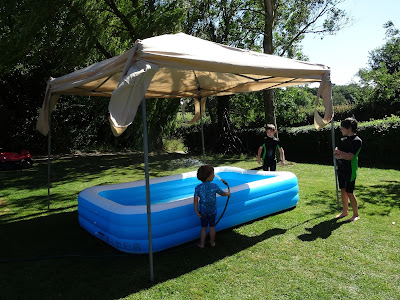 There are those who do enjoy August though especially on hot sunny afternoons when they can play in the paddling pool. 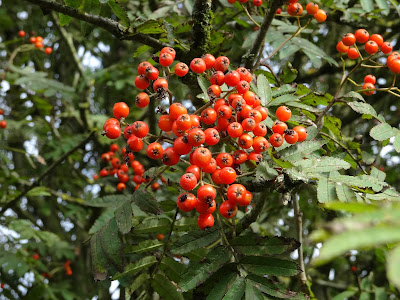 Rowan berries - always the first of the autumn berries to ripen and always a welcome sight, a lovely splash of colour among the greens and browns that are the dominant colours in the countryside in August. 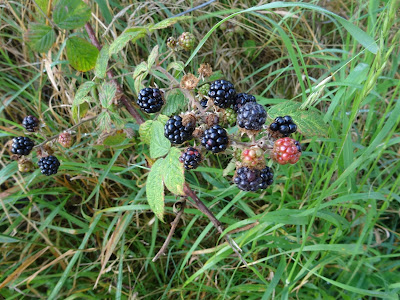 Blackberries are beginning to ripen now and there seem to be a lot of good sized ones around this year. 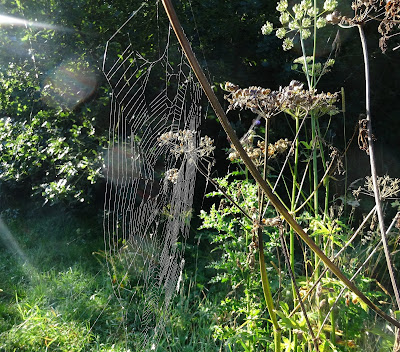 Autumn is my favourite of all the seasons but the one thing I don't enjoy about it is the procession of spiders that come into the house looking for a warm place to spend the winter. I have no problem with snakes, mice, frogs, slugs etc but I'm absolutely terrified of spiders. Nevertheless I do admire the beauty of the intricate webs that some of them spin. 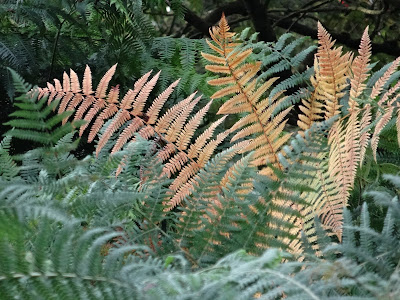 Up on Blackamoor some of the bracken is beginning to turn to the lovely warm golden tones of autumn. 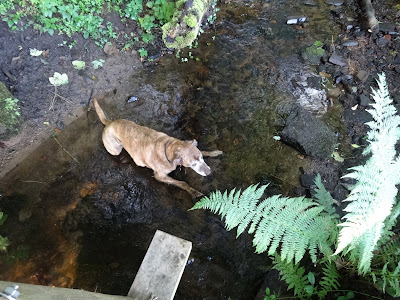 August often brings hot, humid days that don't suit either me or B Baggins. I try to walk in woodland where there is access to streams where he can cool off and have a drink on days like we've been having recently. This is on Blackamoor but the lower part which is wooded and where we pass three streams evenly spaced apart, this makes a big difference to his ability to do this walk. 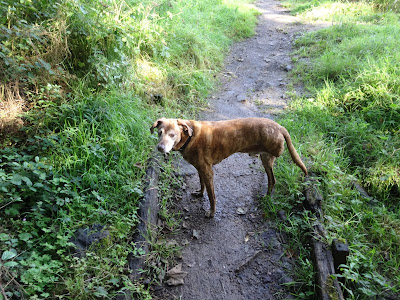 B Baggins is coming up for 131/2 now and with only three legs he does well to still be able to manage it. There's a pretty steep climb up Lenny hill but it's at the beginning of the walk and once he's at the top it's all flat or downhill the rest of the way. So here he is - he's waiting too, not for autumn but for a treat to appear from my pocket:)
Posted by Rowan at Thursday, August 25, 2016 13 comments: 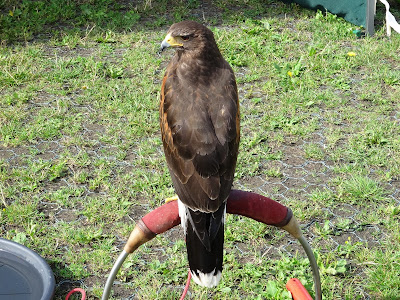 On Wednesday my friend L and I made what may well be our last visit to Bakewell Show which has been declining steadily over the last few years until it now has very little to do with either agriculture or horticulture. I've been going every year since around 1976 and have been a Patron for the last 25 years or more and it's changed out of all recognition until now it's not much more than a big fairground with most of the stands selling tat of one sort or another and very little sign of any animals other than horses - showjumping is the main thing as I believe some of the classes are qualifying classes for the Horse of the Year Show. There are still a few things worth seeing though including the chap with his birds of prey. Above is a beautiful Harris Hawk which was probably my favourite. 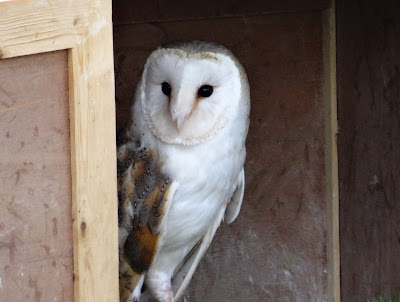 Another contender was the beautiful Barn Owl. I took lots of photos of him while he was perching on the trainer's arm but every time I pressed the shutter he looked away so I had to be satisfied with this one taken when he was put back in his box. 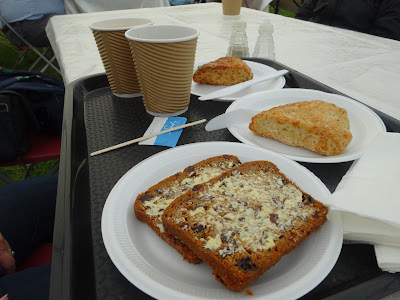 The WI marquee is always worth a visit too and we always have coffee and a little something munchy halfway through the morning - cheese and herb scones and a lovely fruit teabread in this instance. 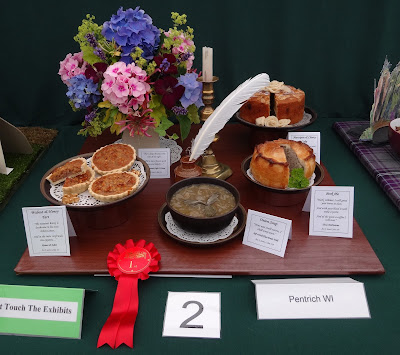 The WI have themed competitions for both cookery and crafts each year for the local Derbyshire WI groups. This year the theme was Shakespeare Plays in commemoration of the 400th anniversary of his death in 1616 but there were very few entries for either the home economics or crafts. This was the winning home economics entry which has to consist of two savoury and two sweet dishes plus a floral exhibit illustrating the theme. 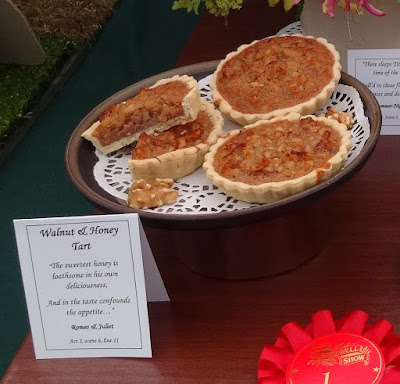 Someone really knew their Shakespeare and this was a very clever exhibit. Each item had a card like the one above with a quote from the appropriate play. I must say that these walnut and honey tarts looked rather delicious in spite of the quote! I rather think that even if there had been a lot more entries this one would still have won. 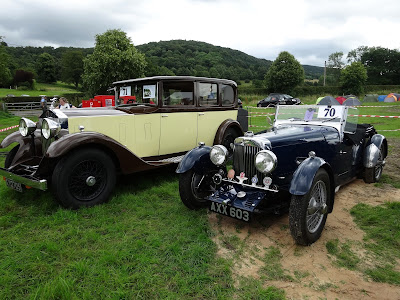 Vintage cars - always a favourite with me. I would absolutely love to own and drive one these elegant 1930s cars. 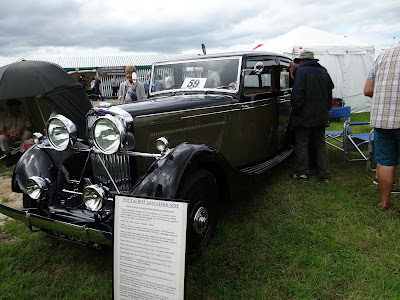 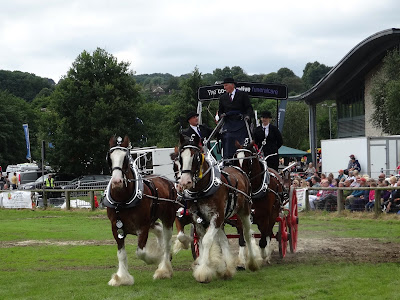 Seeing the heavy horses have always been my favourite part of Bakewell Show and there is always a good entry for these classes - these are the handsome Shire horses belonging to The Co-operative Funeral Care. 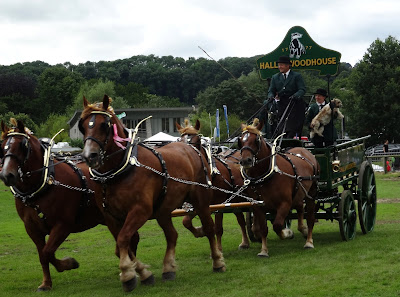 Of all the heavy horse breeds these are my absolute favourites - the wonderful Suffolks frequently known as the Suffolk Punch. They are the oldest breed of heavy horse in Great Britain dating back to the 16th century. All the ones alive now trace their trace their male line back to a stallion called Crisp's Horse of Ufford who was born in 1768 - apparently he was never given a proper name, he was just known as Crisp's horse! The Suffolks became very rare indeed though the numbers are now beginning to increase slightly. They are still an endangered breed though. I'm a member of the Suffolk Horse Society though I have no chance of ever owning one. Speaking of Suffolk that's where I'm off to next week to spend a few days with my son and his family.
Posted by Rowan at Saturday, August 06, 2016 11 comments: 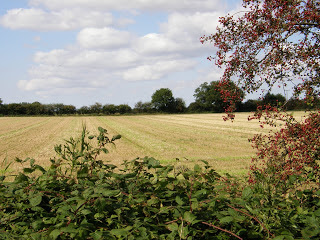 Month of August...blithesome the bee,
Full the hive; better the work of the sickle
Than the bow. 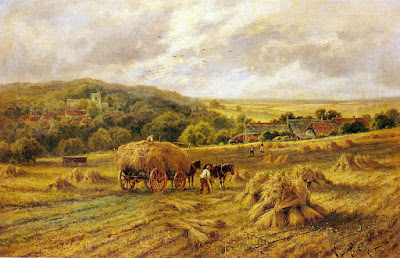 Lughnasadh is one of the great festivals of the Celtic year, it's the midpoint of the summer halfway between May (Beltaine) and November (Samhain) and from now on the days will begin to shorten noticeably as we move towards autumn and winter. The all important grain harvest begins at this time and in the past it was also a time of revelry, feasting and the great Lammas Fairs where the general idea was to have a jolly good time:) 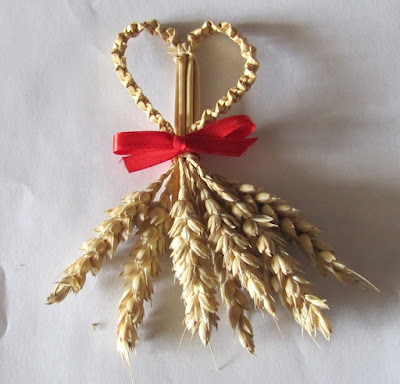 An old tradition connected with Lughnasadh is the making of the Corn Dolly. It was believed that the Corn Spirit retreated before the oncoming reapers and eventually took refuge in the last of the standing corn. This was cut and fashioned into a Corn Dolly where the Corn Spirit could rest through the winter months. In the Spring the Corn Dolly would be returned to the fields when the new crop was sown in the hope that as a reward for keeping the Corn Spirit safe through the cold, dark days of winter she would bring a good harvest in the coming year. Making a Corn Dolly is something I'd like to try and I've located instructions for a simple one and a supplier of straw though if I can get some wheat while I'm in Suffolk during August that would be even more authentic. My son's house is surrounded by arable farmland and wheat is one of the crops that is grown in them. Whether my craft skills are up to this challenge remains to be seen! 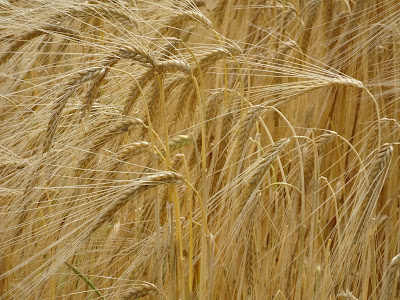 One of the important harvests crops of course was barley - essential for the making of beer! The old traditional folk song about John Barleycorn belongs to this time of the year. These are the first few lines:

If you'd like to listen to it all here is a rather good version by Traffic. Happy Lughnasadh!!
Posted by Rowan at Monday, August 01, 2016 10 comments: