Off to the Coast We're off to our house on the Lancashire coast for a week or two - depends on the weather how long we stay. This is the Wyre Estuary where Bilbo Baggins has his daily walks when we are over there. We are hoping for better weather than this!
Posted by Rowan at Tuesday, July 22, 2008 14 comments: I went down to Suffolk for a few days last week to visit the new addition to the family and here he is, Elisha George - just 9 days old. Granny has been busy with the knitting needles and here is the new blanket that went with me for my new grandson. This is the third one I've made now, one for each grandchild. Elisha's big brother Gabriel, now up and running, last time I saw him he had just taken his first wobbly steps. Cousin Kaitlin enjoying her swing, I popped over to see her earlier this week. It was the village Gala and Well Dressing while I was away so I took these photos this morning, I think that this year's is very good. It is celebrating the 100th anniversary of the SOS distress signal. It's worth clicking to enlarge it. A close up of the lifeboat, you can see three little people on it if you look caerefully. The picture is made entirely of natural materials - petals, leaves, moss, bits of tree bark etc The side with the SOS enclosed in life belts. It was adopted as a worldwide distress signal on 1 July 1908. Three dots three dashes three dots was chosen because it was the shortest three letter arrangement in Morse Code and wasn't subject to any language variations. The letters have no actual meaning in spite of the oft quoted Save Our Ship and Save Our Souls meanings attributed to them. This is the Well Dressing done by the Guides and Brownies this year using a theme of endangered animals.
Posted by Rowan at Friday, July 11, 2008 23 comments: 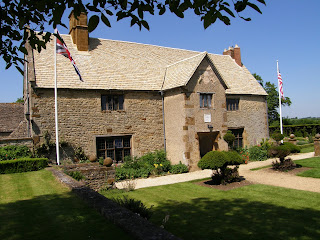 The day following my visit to Oxford I joined a private tour of two Tudor manor houses. Unfortunately the whole day was thrown out of gear by the very late arrival of several of the people on the tour. We are not talking 5 or 10 minutes here but over 40 minutes which was enough to make the whole of the rest of the day rushed and it also meant that there wasn't enough time to do all that was intended. I was actually very cross as I think that people rude enough to be so late should have missed the first house instead of which those of us who arrived on time were the ones who suffered. 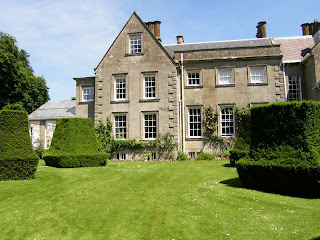 Weston Hall is privately owned by the Sitwell family and is a very pleasant and interesting place. This is the back of the house, there was no chance to take a decent one of the front as it was in very heavy shadow when we arrived. 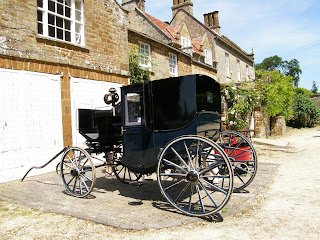 We weren't allowed to take any interior photographs so the only ones I have are of the lovely old family Brougham standing outside the coach house. 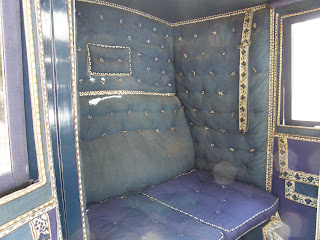 Something you don't often get chance to see - the interior of the carriage. It looks surprisingly comfortable. There was no time to look round the garden and we all rushed off to Sulgrave Manor where we due to have lunch at 1pm. Originally there should have been time to wander round the gardens when we arrived but as we were late for lunch as it was, that went by the wayside too. The lunch was excellent at any rate so that was something.
The photograph at the beginning of this post is Sulgrave Manor and this is where the Washington connection comes in. It was built in about 1500 by a man called Lawrence Washington, the 5xgt grandfather of George Washington, the first President of the United States. George Washington's gt-grandfather Colonel John Washington emigrated to Virginia in 1656. The house belongs jointly to the peoples of Great Britain and the USA and the flags of both nations always fly outside. 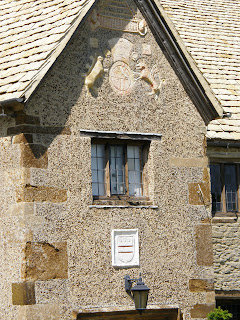 If American readers click on this photo and enlarge it they will see the origin of their national flag on the small plaster shield above the door.. The coat of arms of the Washington family consists of three stars above two red stripes. 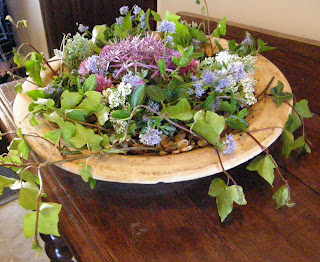 This lovely dish of pot pourri decorated with dried flowers and strands of ivy was standing on a table in the Screens passage as we went into the house. Unusually we were allowed to take photographs of the interior and I was given permission to use them on my blog for which I am most grateful to the Trustees. 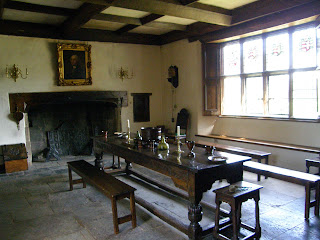 The Great Hall furnished as it would have been when Lawrence Washington first built Sulgrave. I love this room and with a fire lit in the great fireplace it would look wonderful. The small cupboard to the right of the fireplace is a salt cupboard and carved into it are the initials of Lawrence Washington and the five pointed star which became part of the American flag. The portait of George Washington over the mantelpiece is an original by the American artist Gilbert Stuart. 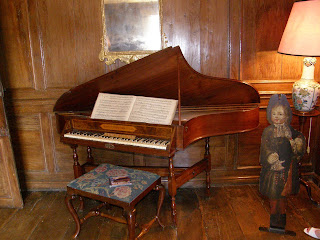 After the Washington family emigrated to America the manor was sold and in the 18th century a new wing was built. This lovely spinet stands in the Oak parlour which is in the new wing. It is moved into the Great Hall occasionally for concerts and I am listening at the moment to a recording of Martin Souter playing various pieces by 18th Century English composers on it. Very pleasant it is too. 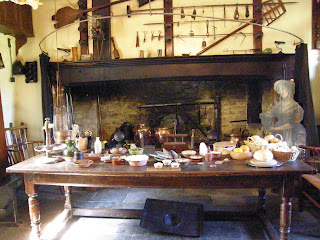 The Great Kitchen which is still used on living history days to do period cookery. It's a poor photo as those of us with cameras had to wait until the guide had finished speaking then grab a few photos and dash after the others. 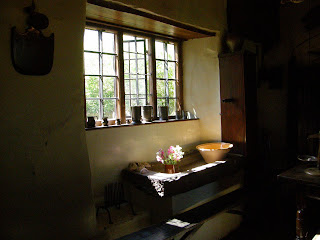 Another view of the kitchen, looking towards the window. 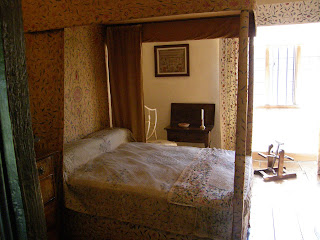 The Chintz bedroom has a four poster bedstead upholstered with Queen Anne Linen. Just visible on the far side of the bed is a white painted mahogany chair which once belonged to George Washington. Again the photo is poor as we could only look in through the door and the sun was streaming in through the window. 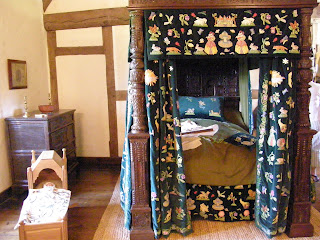 We are now back in the original part of the house and this is The Great Chamber. The oak four poster bed is Elizabethan but the bed hangingings are modern. The individual embroidered motifs have been stitched by volunteers in both the USA and the UK. They have then been applied to a beautiful rich green velvet and made up into the bed hangings which look absolutely superb. 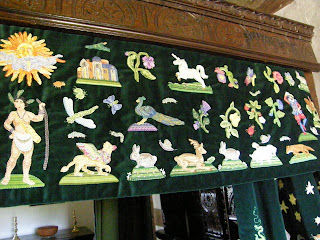 This is a close up showing some of the embroidery in more detail. 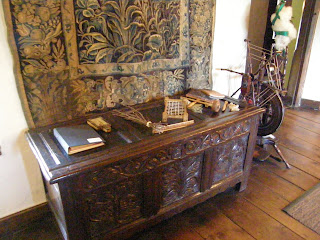 A seventeenth century tapestry on the wall behind an Elizabethan carved chest which is one of the rarest pieces in the house. 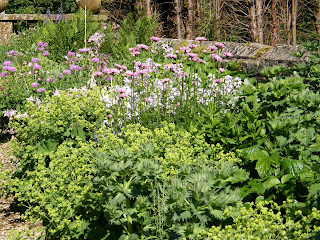 As I said earlier there was no time to look round the gardens so this is just one photo taken as we left the house at the end of the tour. Sulgrave is a lovely house and well worth a visit if you are in the area.
Posted by Rowan at Tuesday, July 01, 2008 16 comments: