Derrick's MeMe - Not My Best Shot! 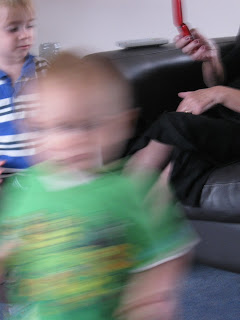 Derrick of Melrose Musings has organized a MeMe for today where we post photos that don't show our talents as photographers at their best. I have absolutely no trouble finding pictures that fit this category:) Above is a recent attempt to photograph my grandson George. The lesson here is always use the Sport setting when small children are involved! 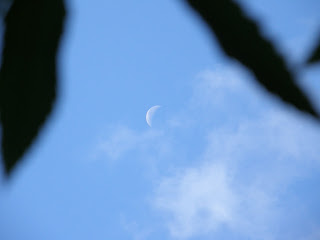 Supposedly an artistic shot of the moon still visible in the morning sky - back to the drawing board I think.... 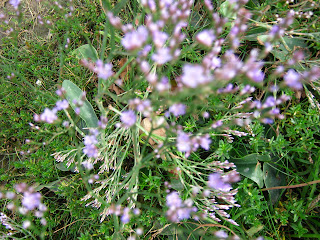 I definitely need a spot more practice with the macro setting on my Canon - I've yet to take a decent close-up with it. I don't think Lord Snowden needs to start worrying just yet.....

This will be my last post for a while as I leave for the USA in the morning - well just London tomorrow actually. I'll be flying to Boston Tuesday afternoon, I gather the weather is OK there so I've packed shorts and t-shirts in hopes that we'll be spending some time at the beach. I'm hoping to catch the Fall colours this time too,this will be the fourth time I've tried but ever the optimist:) See you in October.
Posted by Rowan at Monday, September 21, 2009 19 comments: 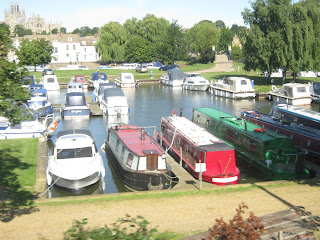 It was my birthday earlier this month and I spent it in Suffolk with my younger son and his family. I decided to travel by train for once and discovered that most of the journey is through lovely countryside, the route goes down through Lincolnshire and then into the Fen country. I had my little Canon Powershot in my bag and I suddenly wondered whether it would be possible to take photographs through the window of a moving train and discovered that it is. You only get one chance and the quality isn't that great but I was quite pleased with some of them. Above is the marina at Ely and if you enlarge it you will see Ely cathedral in the background - one of these days I intend to go there. It was built by William the Conqueror and is a really beautiful building. 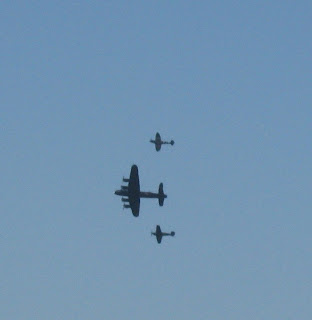 As we thundered through March I saw a low flying plane, then I realised there were three of them and that the big one was a Lancaster bomber and the two little ones were Spitfires - it was the Battle of Britain flight coming in to land at an airfield near March! It was the weekend of the 70th anniversary of the outbreak of WW2 and there must have been a display of some sort. I just had time to snap this photo. Edited to say that the two small planes are actually a Spitfire at the top and a Hurricane at the bottom. Thanks Roy:) 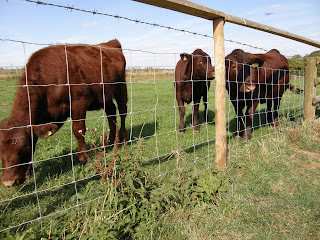 On the Sunday it was a nice day and we decided to take Gabriel and George to Jimmy's Farm which is pretty close to where my son lives. Jimmy Doherty rears rare breed pigs and there have been several documentary series' about the farm on Britsh TV. It's a really good place for children, plenty for them to see and do including these Red Poll cows. 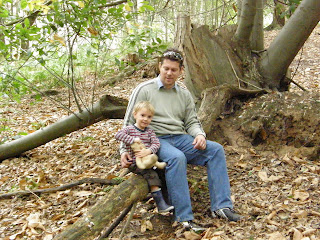 We spent quite a lot of our time on the woodland Nature Trail, it's an ideal place for small boys to run about and bears like it too:) 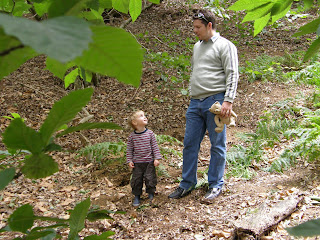 Francesca plans to have an autumn nature table for them at home and we collected some specimens for it - acorns, sweet chestnuts, hazel nuts and a pretty bird's feather. 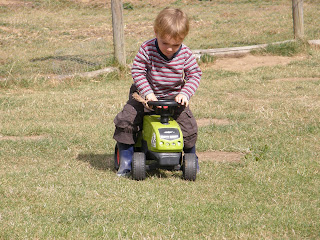 Once Gabriel discovered the little tractor we had a hard time parting him from it! 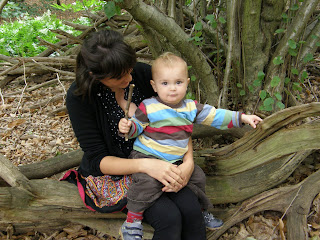 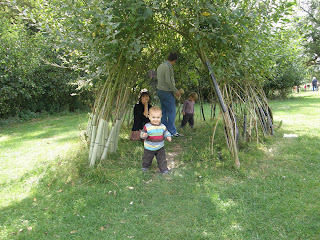 Gabriel and George both loved this living willow house and spent ages playing in it. We shall go back to Jimmy's Farm again as it's that kind of place, always different things to see and do through each of the seasons. On the photos it looks as though we have the place to ourselves but actually there were many family groups and also several coach loads of Brownies and Rainbows having a wonderful day out - they were very well behaved too. 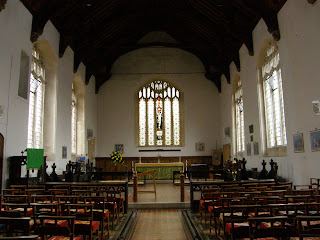 My actual birthday was on Monday and in the morning we went to a small market town called Needham Market, it's an attractive place with quite a few small interesting shops and a great antique centre - the sort where there is masses of interesting, affordable everyday stuff to look at rather than an upmarket antique shop. I bought two 1950s copies of The Countryman magazine which I still haven't read because I managed to leave them behind when I came home! The one building in Needham Market that is truly ugly and uninspiring on the outside is the church of St John the Baptist. It looks neither old nor interesting and I wouldn't even have bothered going inside if it hadn't been for Francesca's mum. Once through the door though, you realise that it is much older than it appears. It was built as a chapel of ease in the late 15th century for pilgrims travelling to visit St Edmund's shrine at Bury St Edmunds and only became a parish church in 1901. It gives a real feeling of what medieval churches must originally have been like when there were no seats or pews and everyone stood through the services. There would be just one or two benches against the walls for elderly or infirm people and this is the origin of the saying that 'the weakest go to the wall'. 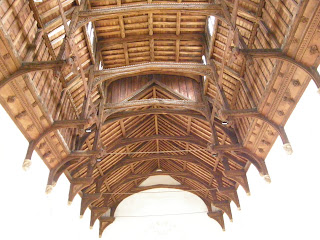 The real hidden secret of this church though is the double hammerbeam roof which is mentioned in Nicholas Pevsner's 'Buildings of England'and he described it as 'the climax of English roof building'. Apparently it's the finest double hammerbeam roof in the country. The leaflet in the church suggests that you lie on the floor and look up and then you get the impression of looking at a ship's hull - and it's quite true. I did and you do! It's thought that it may have been crafted by shipwrights brought in from the nearby coast. 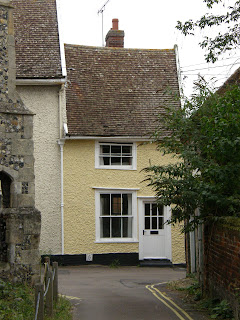 As always in Suffolk many of the houses in Needham Market are painted in pretty colours especially the Suffolk pink which was originally made by mixing animal blood with lime. I loved this tiny cottage which must originally have been a 'one up and one down' and looks as though it was tacked on to the end of this row as an afterthought. 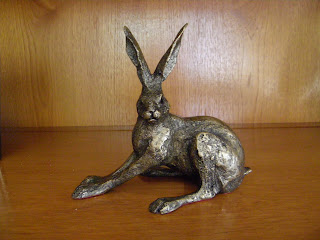 This hare is my birthday present from my husband bought in one of the lovely little shops in Needham Market. I absolutely love it. 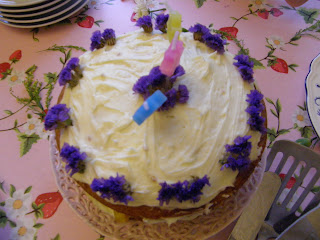 My birthday cake baked for me by my lovely daughter-in-law Francesca, she gave a little party for me and I had more cards and presents than I've had for years. Gabriel and George had been practising singing 'Happy Birthday' and the cake was delicious. It was a really lovely birthday weekend.
Posted by Rowan at Wednesday, September 16, 2009 34 comments: 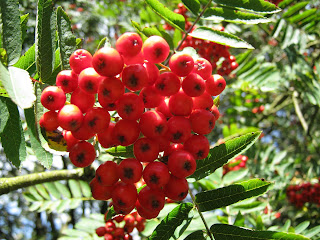 Autumn seems to have arrived very early this year,the woods have that lovely early morning earthy smell and the equinoxial gales are certainly with us at the moment. The woodland floor already has a scattering of fallen leaves and there is a slight chill in the air as I take B Baggins for his walk first thing. Most of the photographs in this post were taken in Lancashire towards the end of August as I walked Mr Dog along the Wyre estuary. Above are rowan berries, rich and opulent in the sunlight. Mixed with crab apples they make an attractive but tart jelly which can be served with game or lamb. 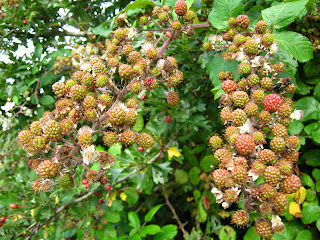 I was struck by the sheer abundance of all the berries this year, these blackberries have still to ripen but they look more like bunches of grapes than brambles - it will be a wonderful harvest for all the birds and small creatures who rely on the hedgerow fruits to see them through the winter. 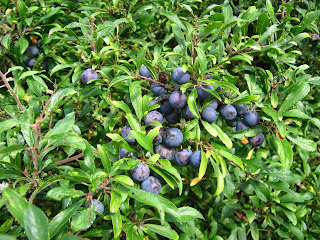 The size and quantity of the sloes was encouraging - you may be seeing some purple berries, I am seeing several bottles of sloe gin! The sloes need a frost on them really before they are used but if my source here at home isn't as generously covered as the ones by the river then I shall be going over in October to pick some of these. 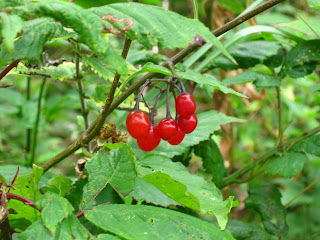 These beautiful, glowing red berries are quite definitely for admiring only - the berries of the woody nightshade are poisonous but nevertheless it's my favourite of all the autumn berries. 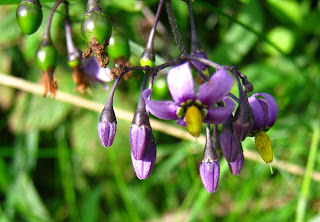 These are the pretty flowers and unripe berries of woody nightshade which scrambles about using other hedgerow plants for support. 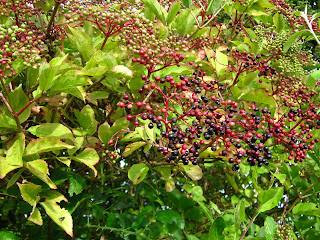 Elderberries beginning to ripen, these can be turned into elderberry rob which is wonderful for winter coughs and colds. This is on my to do list before I go off to the USA at the end of this month. 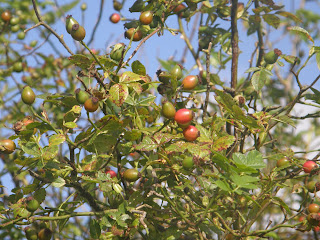 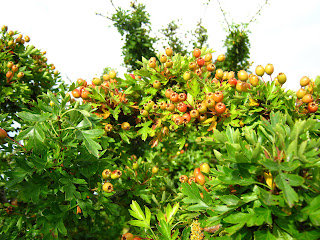 Hips and haws both beginning to ripen and just as prolific as all the other autumn fruits. The haws are the berries of the hawthorn and can be used to make wine, rosehips are a rich source of vitamin C and rose hip syrup was doled out regularly in winter when I was a child to help keep colds at bay. During WW2 children were paid to gather the rosehips so that they could be made into a syrup by a company called Delrosa. This was then supplied to the mothers of young children through the local baby clinics. 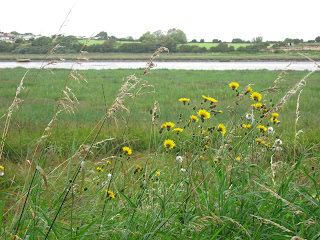 All these were growing within the space of less than a mile along the river estuary, the path has the salt marsh,mud flats and river on one side and the hedgerows and fields on the other. It's not only rich in wild fruits and flowers but in birds of all kinds especially waders and wildfowl. As the tide is going out or coming in it is an absolute paradise for birdwatchers. I see hundreds and hundreds of birds sometimes, I only wish I had more idea what I was looking at. It's a walk that is always full of interest for Bilbo Baggins as well as me, he meets lots of other dogs and loves racing about and playing on the salt marsh. I like walking on the salt marsh too when it's dry enough, it's covered in all kinds of specialized plants including sea lavender, sea asters and glasswort which was used in glassmaking at one time. It also keeps you fit as there are a lot of little creeks and gullies that have to be jumped over and one or two that are wide enough to encourage one to make a detour. Discretion is definitely the better part of valour at these points as I have no wish to suffer the embarrasment of having to scramble out of a deepish and very muddy crater and totter home looking like a drowned rat! Always assuming that I wasn't a drowned rat of course, the creeks fill up when the tide is in and frequently stay full too!
Posted by Rowan at Friday, September 04, 2009 31 comments: