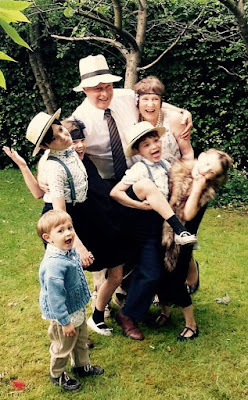 Salmagundi is a 17th/18th Century salad made from cooked chicken,hard boiled eggs, anchovies and all kinds of salad leaves, vegetables and herbs. These are beautifully arranged on a large platter and the finished dish is quite something. But basically it means a mixture of all sorts of things:) I used the title originally in 2007 for this post if anyone is interested. The two babies mentioned in that post are on the left of the photo above and are now 9 and 10 years old:) DH and I both turn 70 this year so we had a small 1920s/30s themed family celebration last weekend and the photo shows us with our five lovely grandchildren. DH had his birthday a couple of weeks ago, mine isn't until September but last weekend was the only one this summer when all three of my children and their families could make it at the same time. 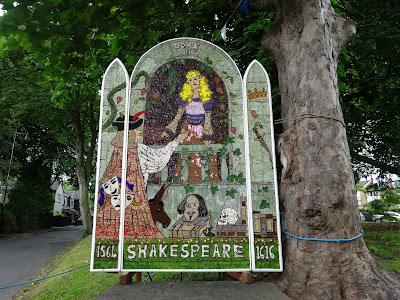 This last week has been our village Well Dressing, the theme for the main board was the 400th anniversary of Shakespeare's death. If you click on the link it will take you to a post also from 2007 which explains a little about this old custom. 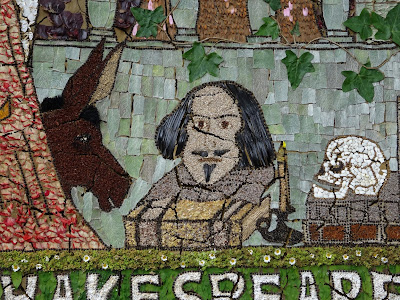 The main part of the picture is illustrating Romeo and Juliet of course though Juliet's hair seems to be rather a bright yellow for someone who is supposed to be Italian:} There are bits and pieces from other Shakespeare plays too and this photo shows not only Shakespeare's head but also the donkey which Puck transformed Bottom into in A Midsummer Night's Dream and Yorick's skull from Hamlet - 'Alas Poor Yorick' is about the only line from Shakespeare that I can quote other than 'Once more unto the breach dear friends' from Henry V!  I've been so busy this week that this is the first chance I've had to go and take photographs and sadly the other one done by the local Guides had already been taken down. It's a pity as it was marking the 450th anniversary of the Great Fire of London and was actually much better than the main well dressing this year. 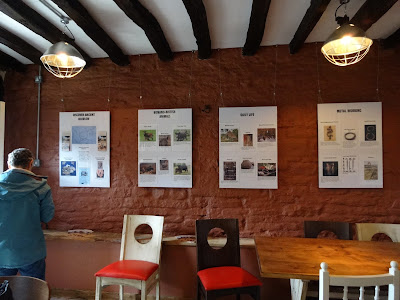 I'm sure I've mentioned before that I'm a member of our local archaeology group Time Travellers. Earlier this year we were awarded Heritage Lottery Funding to dig at a local Romano-British site on Whirlow Hall Farm. It was discovered in 2011 but it has taken all this time to get funding for further excavation. The Brigantes Group (four of us - everyone else is into Roman or Industrial archaeology!) were asked to put together some information boards about life in the Iron Age. This area would have been under the control of the Brigantes tribe during the Iron Age. It's just a temporary exhibition which is on the wall in the cafe. 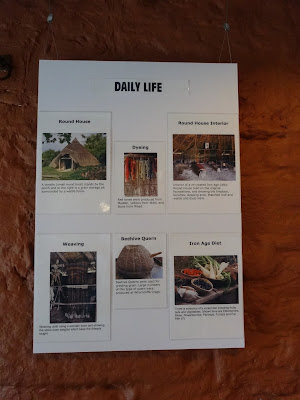 This board shows the exterior and interior of a roundhouse, a beehive quernstone which would have been used for grinding grain to make bread, some of the colours that were achieved using natural dyes (the Celts were very snappy dressers and loved colourful clothes), a weaving loom and some of the food that would have been available to them. If you click and enlarge the photos it might be possible to read the information. 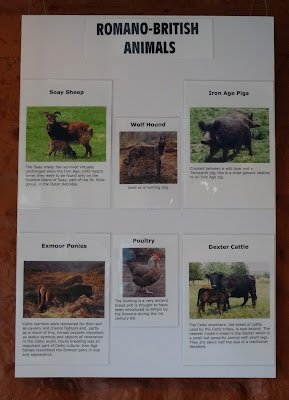 A lot of children visit the farm as it is an educational trust so we thought that a board showing the nearest equivalents to Iron Age animals would interest them. 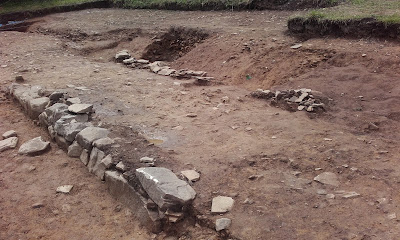 The dig was a definite success with lots of finds of both Roman and Iron Age pottery, a quern stone and a couple of gaming pieces among other things. I was only able to go up a couple of times and didn't do any excavating. My job was washing and cataloguing some of the finds. The line of stones on the left of the photo are the foundations for a Roman timber building. On the right is a ditch and those stones are the top of a revetment wall. It was a farmstead so not in need of the large ditches that would have surrounded a military site. 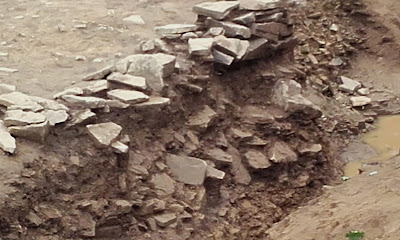 This is the revetment wall. The really exciting thing though was the discovery of a Roman signal station right at the top of the farm's land. Only about 50 are known in Britain so it's an important find. It was found using geophysics and then an exploratory trench was put in to check that the features that should have been there did exist. I saw the geophiz and it was quite clear even to me. You can see for miles from up there and the signal station stands between the Roman forts of Templeborough (now under the Magna Centre in Rotherham) and Navio in the Hope Valley. Following the link will take you to a post I did which included some info about Navio. This is from 2007 as well, I seem to have been busy that year! 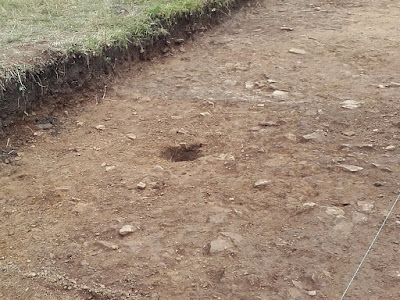 Now I know that this doesn't look very exciting but for those of us who are Brigantes it's very exciting indeed - the small dark circle is an Iron Age post hole!! Of course they only got down to the Iron Age layer right at the end of the dig so I shall have to hope for more lottery funding so that the rest of the site, which is a large one, can be excavated and more postholes found. Personally I'm sure it must indicate that an Iron Age roundhouse stood there - I suspect that the professional archaeologists working on the site wouldn't agree with me though:) 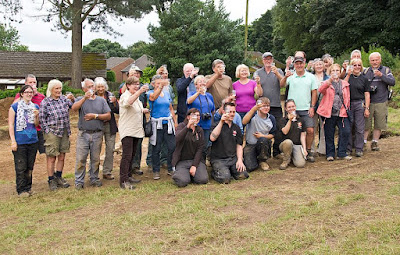 Friday was the final day of the dig and in true Time Team style we had a celebratory drink and some very good cakes to finish things up. It's been really fun and exciting to be part of something like this and another new experience to add to my list.
Posted by Rowan at Sunday, July 10, 2016 7 comments: