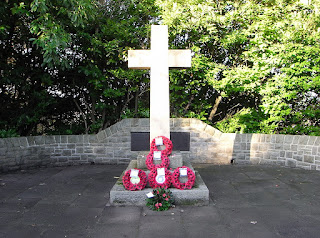 At 11am on the 11th of November each year our busy lives stop for a brief moment as we remember all those who have given their lives in the service of their country. As always I remember my Great Uncle Harry who died in WW1 and my husband's Uncle Harold who died in the Far East in WW2. This year though I want especially to remember Tom Fisher, a young local man who died at Cambrai in WW1. He was from a farming family and I pass the farm where he was born every morning when I walk my dog. He left our little local school at the age of 14 and began his working life as a farm labourer. When we wrote our book about the men named on Totley War Memorial we were unable to trace any living members of his family and we have no photograph of him. We were fortunate though to discover a memoir written in the 1980s by an old man who remembered Tom and it gives probably a better 'picture' than any photograph. This is what Archie Thomas (1903-1991) wrote:

“In the bottom cottage in the 3 on Baslow Road lived Mrs Fisher. To my brother and I there was no-one like her in the world, she had 3 sons at home and the youngest daughter Jess; 3 other daughters being out in service. Jess later became Mrs Joshua Tyzack - an affair of which I probably have more knowledge than any other living person! I loved the youngest son, Tom, and one of my earliest recollections of him (when I was about 3 years old) is of him taking me by the hand one dark winter’s evening and going to Ash Cottage where he milked a couple of cows for an elderly Mr and Mrs Hattersley.. When he took the milk to the house he was given about a half-gallon can of morning milk for his mother. I used to go with him when he was mowing and sit on his knees on the machine for hours at a time, while he mowed the land where Main Avenue, Rowan Tree Dell and all that property now stands.”

To me this conjures up a picture of a kind, gentle young countryman who was liked by all who knew him. Tom Fisher is my favourite of all the soldiers we researched and even though he has no known family to remember him he will not be forgotten. Tom's body was never found and he is one of over 7000 names of men with no known graves on the Cambrai Memorial at Louverval. 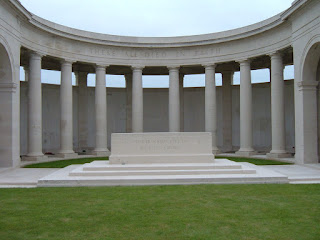 When you go home, tell them of us and say,
For their tomorrow, we gave our today.