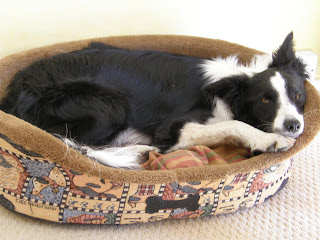 Bilbo's young friend Pip came to stay with him yesterday, she is only 14 months old but is very friendly and adaptable. She brought her own bed with her and is having a little lie down while she weighs the situation up. 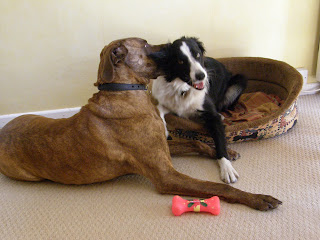 Life is good, two dogs having fun together in a doggy sort of way. They spent a lot of the day wrestling and playing with squeaky toys which belong to Bilbo but usually never get played with. It was like having two little children, I found myself calling out 'what are you two up to now?' and 'You're getting too excited, settle down and be quiet'. They were both very good though, there was no trouble and Bilbo loved having someone to play with. I think he's really missed her today. 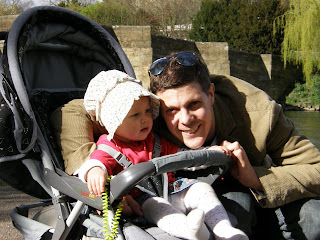 There was alternative entertainment on offer for some of the time though, Kaitlyn and her daddy came over and we went to Bakewell to see the ducks on the river - armed, of course, with bread to feed them. 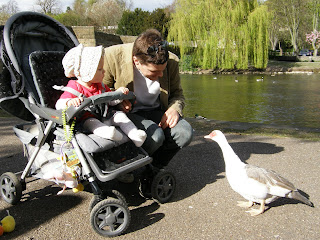 There were some enthusiastic volunteers for the consuming of bits of dry bread - including Kaitlyn:) It quickly became obvious that daddy and granny would have to feed the ducks while Kaitlyn watched. Three of them, including this one, would eat from our hands. Kaitlyn loved it as my three did when they were young. The little prairie bonnet that Kaitlyn is wearing originally belonged to her Aunty Jules, I bought it for Jules on our first visit to the US when she was also a year old. I saved it because I loved it but never thought of it actually being worn again.
Poor Cousin Gabriel wasn't having much of a fun day though, he had his first set of immunization shots yesterday and has reacted quite badly to them and has been feeling a very poorly little boy. He was much better when I rang this evening though. 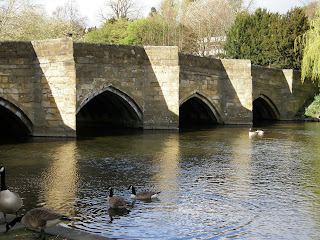 This lovely five arched bridge over the River Wye is 700 years old. 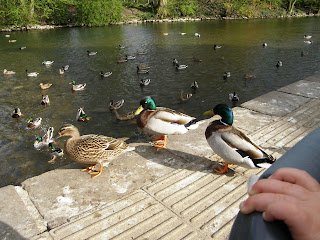 These ducks are just common mallard but when the sun shines on the drakes' spring plumage it shows how very lovely the colours are. The feathers on their heads are a mixture of irridescent greens and blues. The blue only becomes obvious if the sun shines on it at the right angle. 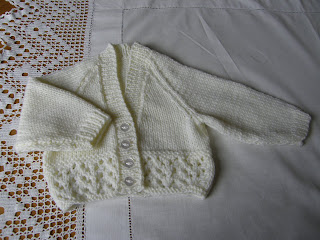 A new cardigan for Gabriel. 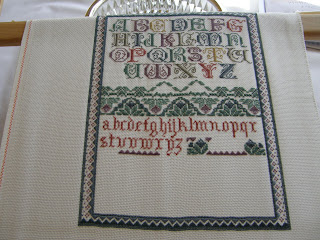 I daren't even tell you how long this sampler has been on the frame, it's months since I last put any stitches into it but now I've decided to get it finished finally. It's progressed a little since the photo was taken and I'd like to get it completed by next week. There's a space for initials and date - good job I didn't put them in as I worked, the date would have said 1990 something I think! 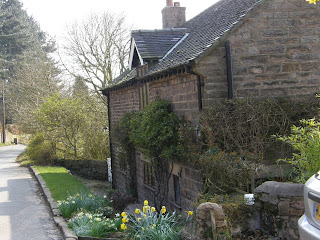 For those of you still awaiting spring:

Spring is sudden; it is her quality,
However carefully we watch for her,
However long delayed
The green in the winter'd hedge
The almond blossom
The piercing daffodil,
Like a lovely woman late for her appointment
She's suddenly here,taking us unawares,
So beautifully annihilating expection
That we applaud her punctual arrival. Gerald Bullett(1893-1958)
Posted by Rowan at Thursday, April 19, 2007

I'm so glad to hear that Bilbo enjoyed his company! They look so cute together! It looks like you had a wonderful time outdoors...what a beautiful place to visit!
Kelli

What a beautiful post - thanks Rowan. It sounds like you had a wonderful day - beautiful photos, beautiful bonnet and sampler ... the dogs had fun too!
Kim x (oh yes and beautiful poem).

Wonderful doggies - and they really do enjoy company!
I have two Whippets and i find myself talking to them all day.... My girls!!!
Tracy x

The photos are beautiful!

Good to hear the dogs got along well. Our neighbor's daughter's dog stayed with her while the daughter was building a house. Our Molly missed him when he moved to his new home. He visits now and then. They don't forget each other!

Feeding the ducks reminds me of Gabi feeding gulls on our little beach in Michigan last year.

I always look forward to your posts!

What a lovely post, it has all my favorites!!! Two dog friends, that's always special.

Then your adorable Kaitlyn and feeding ducks! My own little one (26 yrs ago!!) ate so much of the bread that people muttered under their breath "Do you think that Mom feeds her anything at home?" (!!) a sweet little cardigan like my Oma made, and lastly, a scene out the window that is to die for!

Wishing I was at Shepton Mallet this weekend, and enjoying Spring as only the UK has. :)
Lidy

Hello,
I found you through Across the Pond. My name is Robin Sherwood.
You have a lovely blog!
Please visit my blog when you have a chance.
best
Robin

Oh Rowan, I have just discovered your blog. How lovely, I have been enjoying your past blogs, & being a sucker for dogs love the story about the 2 dogs enjoying each other's company. I love all your pics of your flowers!
I will put you on my blogs to visit. Hope that is ok?

Rowan, your photos have been a pleasure to see I am so glad I decided to drop by and see your blog tonight........You take such lovely photos, the very cute dogs photos they look so content.

I do very much like your cross stitch work and the view from you window, infact everything is so nice thanks for having me over to visit.

I had a feeling Biblo would be a gracious host. They appear to have formed a friendship and he will miss her when she goes home.
The cardigan is lovely as is the sampler.
Kaitlyn looks very sweet in her bonnet, and feeding the ducks is always fun.
I love the poem at the end of your post, and as one who has been awaiting Spring ..for what seems like months now, it is very appropriate..thank you..!

Rowan, is that your home? It's just lovely.

Caleb, the photograph of the cottage above the poem was taken when I was staying with friends in Cheshire a week or two back. I only wish it were mine - my house is a very ordinary brick built late 50s affair I'm afraid.

I'm glad Bilbo had Pip to play with - they look as if they get along famously! Kaitlyn is adorable and must have had a great day with her papa and her grandmaman. Gabriel's cardigan is lovely and your sampler is really a beautiful work!

Oh a Border Collie and pictures of home all in one post!! I was in Bakewell last Saturday and Sunday it wasn't as nice a weather as you had though, it looked lovely.Did you have any Bakewell pudding?