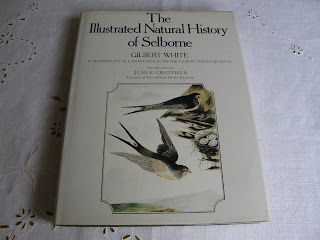 Gilbert White was born in Selborne, a small Hampshire village, in 1720 and he lived there for the whole of his life. He was a country curate and also a Fellow of Oriel College, Oxford. His claim to fame though is as the first real naturalist and his book The Illustrated Natural History of Selborne was originally published in 1789. It has never been out of print since and after the Bible, Shakespeare and Pilgrim's Progress it is the fourth most published work in the English language. This was my second visit to Selborne and on neither occasion have I had time to explore the village and the surrounding countryside properly but at some stage I want to do that. I found an interesting booklet with not only information about Gilbert White and his house but also the history of the rest of the village with a map! As I hope to spend some time looking round and taking photographs at some future date I have just included a few bits and pieces in this post. 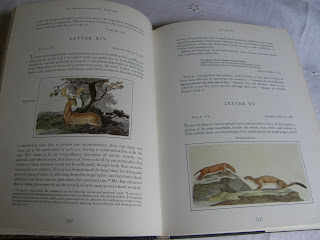 This is a page from my copy of the book with a couple of the wonderful illustrations.They aren't the original ones but are hand coloured engravings by artists working at the same period of time. It is mostly a book about his observations of the birds,plants and animals that he saw but it also has bits and pieces about the local people and area and the weather - always a subject of interest to British people:) 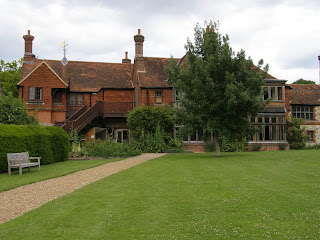 This is the back of The Wakes, the house where he lived. It is so much altered and enlarged from when he knew it though that I haven't included any interiors from the guide book. As a building I find it very attractive - full of nooks and crannies, it would be an intriguing house to explore and I feel there would be every chance of the discovery of secret passages and hidden treasure:) 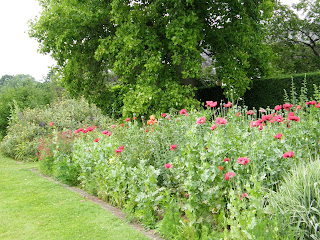 Not only was Gilbert White a naturalist but he was also a very keen gardener and the gardens are now more or less as he had them when he was alive and the plants grown are the ones he would have known. Close to the house are six large beds filled with old roses and both perennial and annual plants. 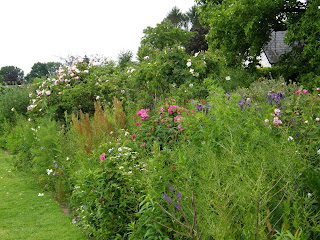 Happily there is also a 'plant sales' area so I didn't come away empty-handed! There was a pretty little enclosed herb garden to one side, I would have liked to linger longer here but as I hadn't arrived until 3.30pm and it closed at 5pm I had to go at a fairly brisk pace in order to see both house and garden. 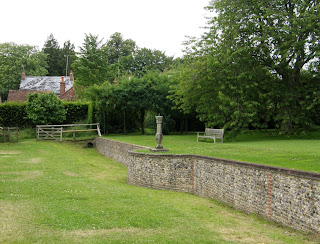 I don't know whether any of you have heard of a haha and wondered what it was - if so all will now be revealed. From the house side the wall is invisible and the fortunate owner has a clear view out over his parkland and/or the surrounding countryside. The wall however prevents any grazing animals - cattle, deer, sheep or whatever - from invading and ruining the garden. The lawn with the sundial is the bottom end of the one that can be seen in the photograph of the house above. 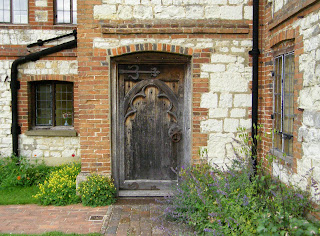 I took this simply because I thought that this small corner with the door made a really beautiful picture. The remaining photos below are of cottages around the village that appealed to me, there is no particular story attached to any of them. 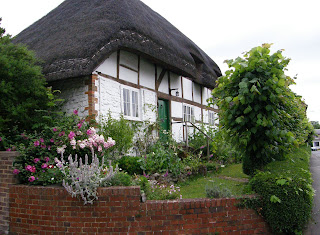 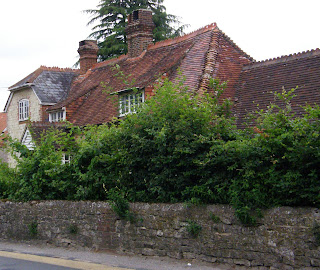 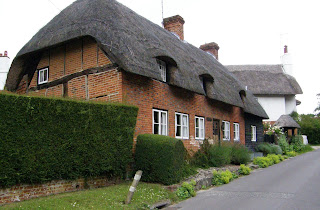 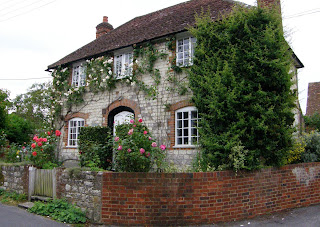 I think the Tudor Stillroom will have to be delayed as we are going over to our seaside home for the week in the morning and there is no computer there. If the weather co-operates there will hopefully be another visit to the Lake District and a visit to the cottage where William Wordsworth lived. If not there will be lots of pictures of a wet,windswept seashore:)
Posted by Rowan at Saturday, June 23, 2007

Another wonderful post. I'll have to remember to tell J about the haha!

Enjoy your time at your seaside home! Hope the weather is wonderful!

gorgeous, Rowan, just gorgeous.
looking at the gardens made me sigh with longing..
I enlarged the photo of the herb garden - is that dock in the middle? It is a weed here but I am going to try to cultivate some :)
that is one of the 'weeds' that i use to use as a poultice for my dollies xox

I had never heard of Gilbert White before. Very interesting tour!

Loved this tour too!! I had never heard of a haha... but I will never forget it now...the houses were wonderful!!

Thanks, rowan, for sharing the history, beauty, and charm of your England. I'm in love with it all.
I always wondered about the Scarlet Pimpernel....

Robyn, the plant with the large green leaves looks to me like inula helenium - the herb elecampane. I have it in my garden and it looks like that - the dried root is used to make cough sweets. It's actually a rather attractive plant, gets very tall and has big yellow daisy flowers. Even docks have their uses though, we always use crushed leaves on nettle stings:)

Glad you didn't come away empty handed! The Wakes and the village of Selbourne look beautiful, must pay it a visit. Love those gardens, especially those deep beds full of roses.
Kim x

I learned something today..I had never heard of Gilbert White. I will see if the book is available here. I knew what a haha was, and always thought they were ingenious. Perhaps I could construct something similar to deter rabbits..! Just a silly thought..!
The Wakes looks magical, the sort of house the Famous Five would find a mystery in.
Enjoy the week at Eastpines, I hope the weather cooperates.
xx

Nothing like outwitting a deer, eh! Thanks for the back-story, I had heard of Gilbert White, but didn't know much of him and the history - very informative and interesting :)

Enjoy your week off!

I always learn things when I visit you! I wasn't familiar with Gilbert White nor had I ever heard of a haha but now I know. That house is fantastic! I agree with you....I bet there are all sorts of hidden corners, nooks and crannies. I also enjoyed seeing all the other cottages. Thanks for the tour. Have fun at the seaside and we'll see you when you return.

I love visiting your world!
And what a wonderful idea the haha is!
Have a nice time at the seaside, & hope the sun shines for you!

Beautiful photos. Have a lovely time away from the siren-song of the computer. :-)

Hi Rowan,
What a surprise to happen upon your post about Gilbert White. I'm re-reading his journal right now. This is what I love about it: I view both the amazing things that he sees and also little glimpses into his personality.

Two years ago in his honor I started a five-year circular life list in order to observe the regularity of the seasons.

Thank you so much for publishing these photos!

Hope you got some useful herbs...lovely photos and I really like reading your posts..always interesting!

Jane
x
P.S Did you know it's a Blue Moon tomorrow?

I loved reading your post and seeing your pictures. You have the most interesting adventures and I learn so much about history, local culture and have an opportunity to see the countryside. Thank you!

Hello Rowan - I've really missed so many great posts while away in Canada - am catching up because as always you have so much to show and tell - interesting and beautiful!
Hope you trip is dry - hear the weather has been terrible over there - my cousin in Devon said even now it feels like November, and so much rain. Sending you Carolina blue skies and hot days!
Fondly, Mary.

What stunning cottages! I want the one with the "green" door!
Just gorgeous pictures, thank you!

That book looks really interesting Rowan. And an interesting trip you had too. I`ll have that last cottage! I wonder who the lucky people are that live there?

So much wonderful information here. I had no idea that the book was the 4th most published! The houe and cottages are so enjoyable to look at too. love them! thank you for your birthday wishes. I hope the weather improves for journey to the lake district.