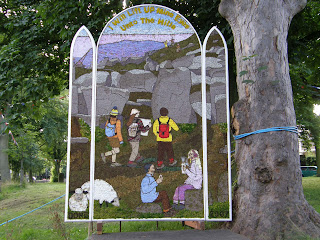 This week is the annual Well Dressing in my village, it is one of many that will take place over the summer months from May to around the end of August. It is an ancient custom that is restricted almost entirely to villages in the county of Derbyshire, though there is one place in Staffordshire and one on Gloucestershire also I believe. I would imagine that in the mists of history the dressing of springs and wells was probably much more widespread though. Our village dresses two wells, above is the main one. Many of the present day Dressings are modern revivals but there are a few villages, including Tissington, that have an unbroken tradition going back for centuries. 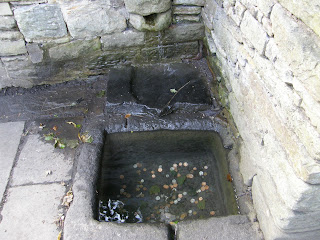 This is the spring below the picture. The dressing of wells and springs has pagan origins of course, as a thanksgiving to the various water spirits and goddesses for the gift of water and in the hope of continued supplies. As with so many other things it has become Christianized - I often wonder how many people actually realise that they are taking part in a pagan ceremony when the wells are blessed by the local vicar :) You can see the coins which have been thrown into the stone basin 'for luck'. 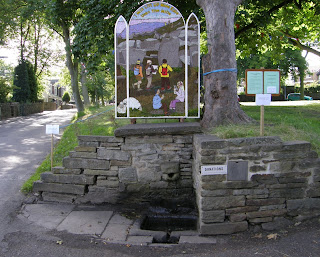 This is the whole picture, the spring is on the edge of the village green. The pictures are made in a wooden frame which is filled with clay between 1/2" and 1" thick. Salt is added to the clay to keep it moist and prevent it cracking when it is exposed to the elements. Each village chooses a different theme each year and the design is drawn on paper which is laid over the clay and the design is pricked through with an awl or other sharp tool. The paper is then removed and the outline of the design is defined by using alder cones or holly or rowan berries. Then the picture is filled in using only natural materials - mosses, lichens, bark, leaves and flower petals. They take several days to complete and are the combined effort of many people. The results sometimes are absolutely stunning. 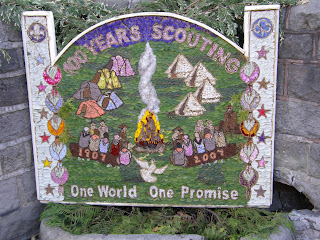 This is the spring which is dressed each year by the local guides - as in scouts and guides not taking you on a tour guides :) I think they've done a great job. I'll try and get to some of the other local villages and take photographs during the summer. The one that is usually best has already gone by unfortunately, Ashford-in-the -Water dresses 5 wells and they are always really beautiful.
Clicking on the photos will hopefully enlarge them so that you can see more detail.
Posted by Rowan at Thursday, July 12, 2007

Another fascinating post, Rowan. I love reading your posts so much.
It always makes me smile to think of the pagan origins of so many customs.

Rowan, I am never disappointed when I visit Circle of the Year. Thanks so much for another great post!
Pat
Back Porch Musings

This was really interesting. I had never heard of the blessing of the wells. We don't have wells in our cities. We had a well in the village where I grew up. It was topped by one of those red, long-handled pumps. Do you have them in England? We kids would cover the spout with our left hands and pump vigorously with our right arms. Then when we had a supply of nice cold water we bent down and let the water slip through our fingers as we drank it. Not too sanitary, that!

I haven't read the post yet :) but I just had to tell you that Daisy mentioned you would know of some wells, and here they are!
I have your long, delicious email to answer and will do it over the weekend...lots to tell and discuss for sure.
I am looking for a sacred well so I can collect some water for myself.. I am sure we must have one somewhere.

Lovely post! We are on a well that has a steadily diminishing water level. The idea of dressing a well to show thanks for the gift of water is enchanting, and the pictures are great.

That Kaitlyn is sure a honey..

I have never heard of well dressings! Interesting origins too. thanks again for a fascinating post Rowan.
Kim x

I'm sorry you are having so much rain that you aren't able to enjoy a cuppa tea outside or abundant lavender this year. Maybe next year --- I'm sure the rain brings blessings in some way, right? Deeper roots for next years bloom?

Dressing of the well sort of reminds me of floats that the have in a parade here in United States but the only thing there not moving.

I just love your posts, because I always learn something new! I've never heard of well dressing either, and it sounds like a lovely tradition- I can't imagine the time it takes to make them. I do hope you can get to some of the other villages- I'd love to see what they've done too. I'm willing to bet that a lot of the people taking part in the blessing have no idea of its origins!

I've never heard of well dressings before either but I think it's a lovely celebration. Thanks for sharing with us! ♥

p.s. ~ I just read your comment on my blog ... we feel about rain the way you feel about sun!

No danger that the wells will run dry this summer! Glad you are back with us. Regards,

Hi
Thanks for popping into my blog. I also have never heard of well dressings.
I also like the 1930s. Will pop back again. Tricia

Rowan, I loved this post - have always wanted to know more about well dressing. Being a young country, well dressing is not a tradition which has taken hold in Canada, but I have read a fair bit about it and been fascinated. Thank you!!!

Rowan,
Whenever I'm in the mood to learn something new about some old tradition, I come to your blog, and voila! So many traditions have their roots in paganism, but the chistian newcomers have usurped credit. The idea of well dressing seems to be unique to the U.K. Keeping these traditions alive is a blessing.
rel

What a beautiful post! Thanks again Rowan for your kind email on the spring goddesses! The dressing of the wells is so interesting! What a wonderful ritual. I have ancestors from the UK and feel such a pull to visit the land of my roots. It is so strong that I know I have to visit someday. Your blog is lovely. I choose Sulis for my goddess name. I took a little test and the tree that is most like my Celtic personality is the Rowan tree! Thanks again for your thoughtfulness. Jenny ( Sulis aka kansasrose)

I love this post Rowan, thankyou. I am going to come visit your area when I come to the UK in 2009. I am also going to bring me a small bottle and take some well water home. My aim is to collect sacred well water from all over and put it into a wishing well in my garden.. I always have a huge chuckle when i think of all the pagan celebrations that christians have adopted as their own.. nuff said about that ;)
I love your blog & your lore from the bottom of my heart right up to the top!!! bless you xo

What a lovely ancient custom to keep!

And I really get a kick out of ~~ "often wonder how many people actually realise that they are taking part in a pagan ceremony when the wells are blessed by the local vicar :)" -giggles- Yes, and of course. So many things are based on {and shamelessly plucked from} ancient pagan ceremonies.

I love to notice the changing of the Seasons and loved it when I discovered that pagans have been doing this, for centuries. I was hardly alone in this {noticing Season changes}, after all!!!

Again, thank you so much for sharing these customs and photographs of your region. Simply beautiful.

Now this was fascinating to read about. I had no idea this custom existed. When you spoke of Guides, it brought back some good memories of my years as a Girl Guide.

We have nothing like that around here - such a wonderful tradition!

just found your blog ..im from the peak district !! we have well dressings in the villages all round us !!i forget sometimes that not everyone knows about them !!

I have given you a blogging award. Please come to my blog and see it.

Something else you've taught me about....I had never heard of this tradition but I think it's a lovely one. I'm happy to hear it's being carried forward and new generations will learn of it, too.
The pictures are wonderful! All that detail with just sticks and moss, leaves and flowers.