Fun at the Farm and Kentwell Hall 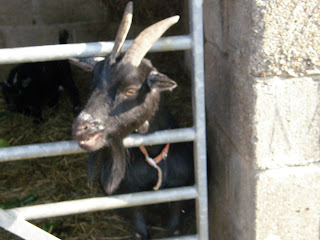 I recently went down to Suffolk to spend a couple of days with Neil,Cesca and the boys. There was a Harvest Open Day on at a local farm so we went along. Gabriel was fascinated by the goats. 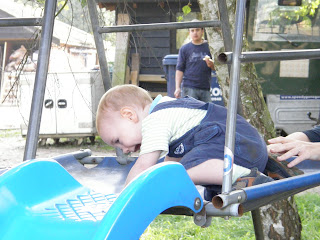 There was a little playground for the children, he loves playing on a slide. 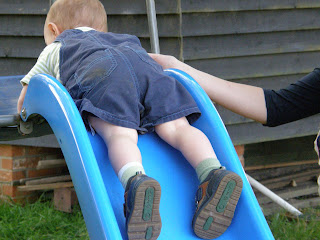 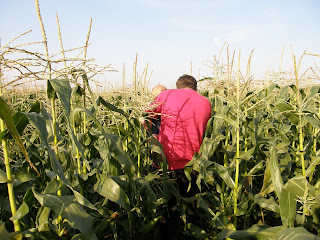 They had pick-your-own corn so we ventured into the jungle to get some. 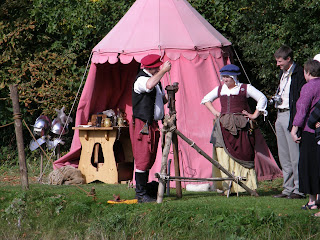 The next day was my belated birthday treat and I was taken to Kentwell Hall for one of their Tudor re-enactment days. An invasion by the Spanish Armada is expected at any moment and the men of the Estate form a militia which must train to defend England against the Spaniards. This brave lad is priming a small canon which was fired regularly during the afternoon. It made us jump at first then you got use to the noise. Clicking on the photos will enlarge them. 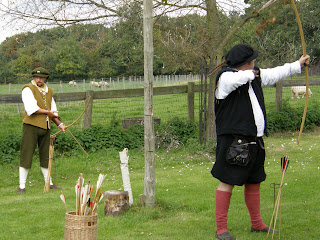 English archers were the best in the world and villagers were required to practise at the butts regularly. 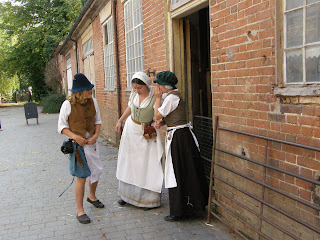 A quiet moment and a chance for some gossip and perhaps a little flirting? 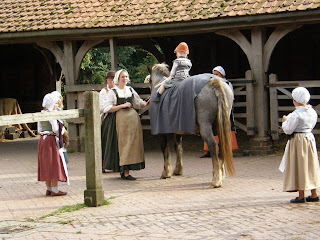 There are a surprising number of children among the re-enactors, here are some enjoying a chance to ride one of the big working horses. 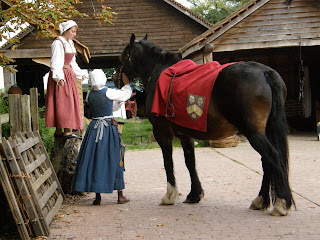 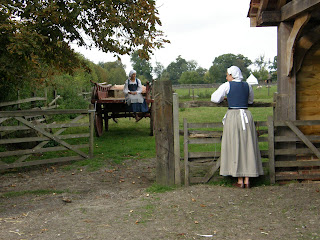 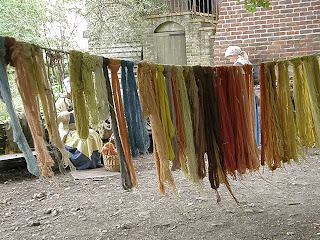 There was a group of people doing natural dyeing, I thought this line of newly dyed yarn was just beautiful. The colours are so soft and rich. I watched as some yarn being dyed in indigo was taken out of the vat, it came out a sort of dirty cream and then before my eyes it started to turn blue and the colour got deeper and deeper. It was amazing to see. 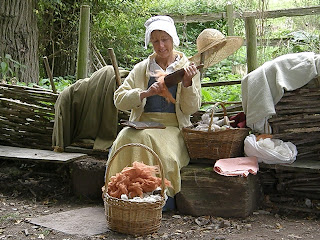 The wool being carded ready for spinning. 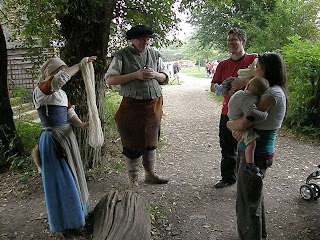 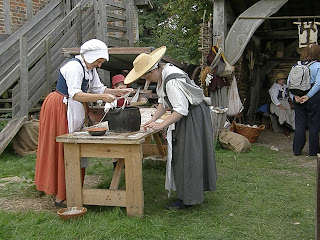 I couldn't decide what these ladies were doing and finally had to ask, the answer was really unexpected. They are washing animal guts that will eventually be turned into the strings for musical instruments. If I'd guessed all day I wouldn't have come up with that and yet I did know that this is what the strings were made of - I just didn't make the connection. 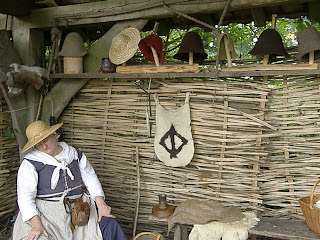 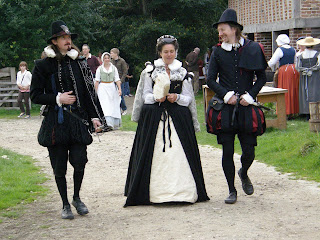 The Lord and Lady of the manor honoured us with a word as they passed by. 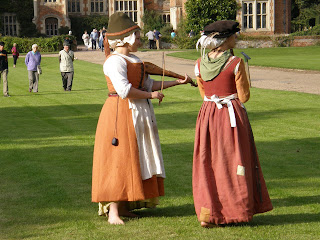 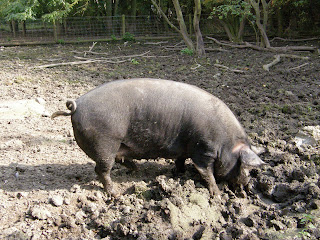 There was plenty on the Home Farm to entertain Gabriel too, as well as various kinds of poultry and the horses there were large black pigs........... 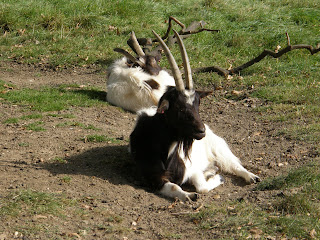 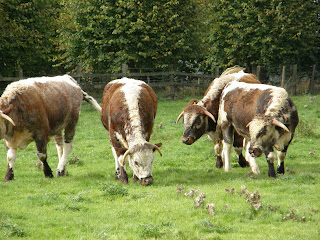 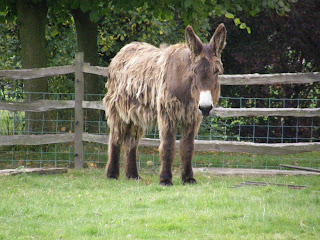 and some donkeys with incredibly shaggy coats. There was so much more to see, we never got inside the house at all so next summer we'll be going back again for one of the Tudor days.
Posted by Rowan at Tuesday, October 14, 2008

Rowan, I feel as though I've stepped back in time. Amazing post!

What a marvelous tour thank-you! of course, I loved learning more about indigo!!
Happy belated Birthday from a fellow Libra!

What a lovely, lovely post, Rowan, thanks for posting those photos. I'm becoming quite interested in this re-enactment business, so might look into it and see if there's anything around here for me to join in with. The natural dyeing is wonderful, that's what I do here; indigo dyeing is like magic............
I'll come back more than once for another look, I should think!

Ooh, this does look like fun! Dress-up and animals! I really love goats! They look so content with life.

I love the clothes, especially! Those full skirts could hide my cellulite a treat!

I really enjoyed this post, rowan, Kentwell Hall looks wonderful - I'm always fascinated by re-enactments and this one looks really good. The costumes look very accurate and the dyed wools drying on the line look wonderful. Love the shaggy donkey! Glad you all had a lovely day:)

What a lovely blog you have, and I've really enjoyed all of the photos included with your posts.
You make me feel like I was there!

I'm impressed with the quality of this renactment. It all looks so authentic, the costumes especially.
I imagine the participants are all volunteers? They appear to know what they are doing, and enjoy doing it. Do you plan on attending any 'workshops' this year, I remember you doing some in the past.
I'm still chuckling at Lynda (Granny K)'s comment..!

I've just discovered your blog. It's fascinating! Thanks for the posts and the pictures.

CJ and I both would have enjoyed this, I think! I can almost hear her endless questions, and she also loves to slide...over and over and over. I enjoyed the bit about natural dyeing the most- I would loved to have seen it change color like that. Can't wait to see where you're off to next!

I had to finally visit and tell you how I've missed your posts. I lost my computer the end of May and my complete list of blogs I love were lost. I've been doing so much detective work lately, finding my favorites, that I absolutely could not remember the name of your blog. I feel so dumb but am so happy I found you!!!!

By the way, I made the little Mary Jane's you sent me the pattern for. My little granddaughter looked so cute in them. Boy that was way back last year in June! It's been such a long time!

Glad I found you and I've backed up my blog list....lol.

I love all these photos especially the goats! My son used to have goats and they always make me think of him.

This is so cool, Dorothy. All we have are dirty, noisy threshing festivals. Of course, there is the Renaissance Festival held annually near Minneapolis, but I never get there anymore. We certainly could never have a Tudor re-creation, though we do have 7th Cavalry re-creations at Fort Lincoln (Custer-era).

We visited Kentwell when we used to stay at Brightlingsea each summer. It's a great place re-enactment-wise, but I had a friend that worked there with the animals and all was apparently not sweetness and light behind the scenes as owners not farming-minded . . .

Hi
Just found your blog whilst searching for some pics of Kentwell. i am a re-enactor at KW (I am a gunner from the island, Not the one in the picture though! although the woman next to him is my goodwife) and am delighted you had a good day at Michelmas last year. It is great to read and hear when visitors like yourself have a good time, it makes all the hard work worthwhile. And you guessed right, all the reenactors, are volunteers who clothe and equip themselves. If you want to see the manor really come alive visit the main recreation of Tudor life in June/July, it is something really special. kind regards
Tim