On To Dorset via Salisbury 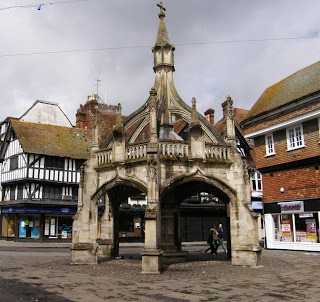 It was early on a grey,cool morning as I left Sussex and headed towards Dorset,my early start was to give me as much time as possible in Salisbury.The first thing that took my attention as I walked from the car park was the medieval Poultry Cross where once upon a time country people would sell their eggs and poultry, it is the only survivor of the four market crosses that once stood in Salisbury's market place. In the background are some half-timbered buildings one of which is... 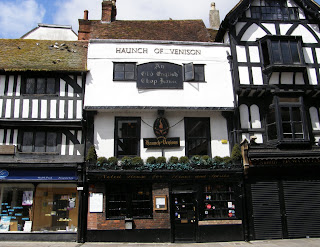 .... The Haunch of Venison which was built originally to house the craftsmen working on the cathedral spire, it has been there since at least 1320 and is Salisbury's oldest inn. 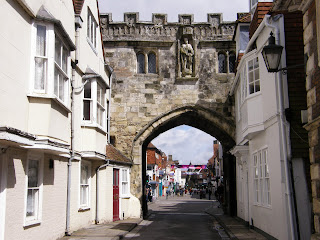 Relations between the citizens of Salisbury and the clergy of the cathedral were not always entirely harmonious and there was constant trouble to the point that in 1327 Edward lll granted a licence for the building 'an embattled wall of stone' around the cathedral and Close. The photo shows High St Gate, one of four gates which were, and still are, locked at night. This gate had a portcullis which could be dropped across the entrance when the citizens got too out of hand! 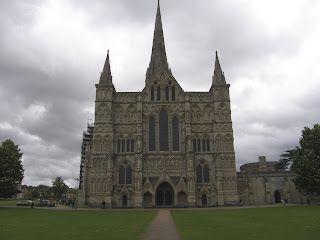 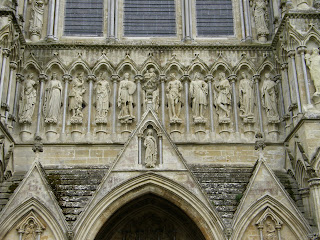 The West Front of the cathedral with its life size statues of saints. Salisbury is unique in that it was built to a single plan in a remarkably short space of time, the foundation stone was laid in 1220 and the cathedral was complete by 1266. The chapter house and cloisters were added by 1280. It didn't have a spire to begin with, this was added around 1335 and at 404 ft is the highest in England. Clicking on the photos will bring up more detail. 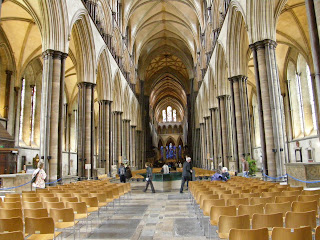 The interior of the cathedral looking towards the east window. 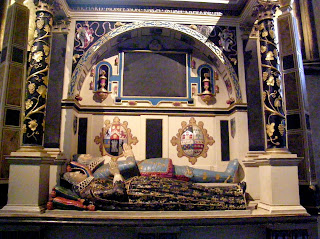 The rather splendid tomb of sir Richard Mompesson and his wife Katherine who owned Mompesson House, one of the houses in the Cathedral Close and now owned by the National Trust. 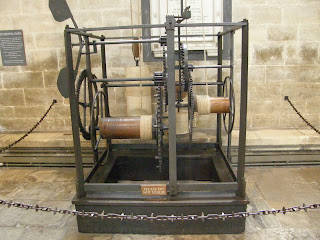 This is the oldest working clock in the world, it was made about 1386 and only strikes the hours. It doesn't have a face as it was originally in a bell tower and only heard not seen. 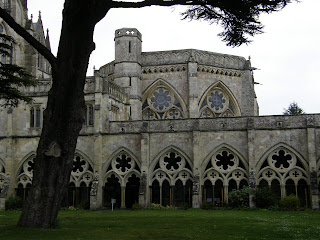 The cloisters and behind them the octagonal building is the Chapter House. The Chapter House is the only part of the cathedral where photography isn't allowed so naturally it is also far and away the most attractive and interesting part! It has a wonderful vaulted ceiling and a superb medieval carved stone freize depicting scenes from the books of Genesis and Exodus, including Adam and Eve, the building of the Ark, and Abel's murder at the hands of Cain. It is fascinating to walk round with the information card explaining which each one represents. The jewel in the crown though is one of only four of the original forty or so copies of Magna Carta still in existence. 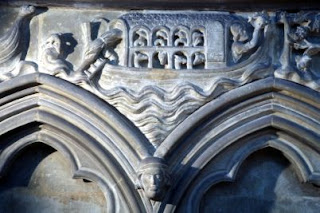 I couldn't resist looking for an online image of the freeze and this is the only one I could find - Noah's Ark with Noah and the returning dove. Isn't it wonderful? 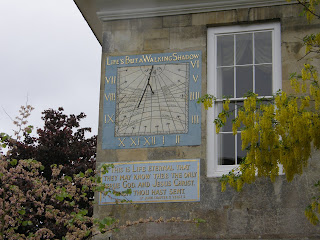 Walking through the close I saw this lovely sundial on the wall of Malmesbury House. 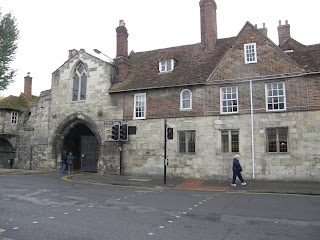 This is another of the gates of the city - St Ann's Gate this time and the rain was beginning to fall quite heavily again when I took this photo, hence the rather grey and depressing look to it. The great composer Handel was a friend of the owner of Malmesbury House and in 1739 he is said to have given his first concert in England in the room with the arched window above the gate. In the house that you can just see on the left of the gate lived Henry Fielding, the author of Tom Jones. He liked to have a good time and was apparently giving one of his frequent noisy parties as Handel performed next door! 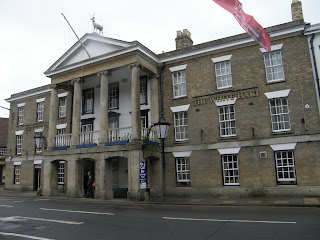 I love the beautiful statue on the portico of The White Hart which is an 18th century building - again you need to click on the photo to see it properly. It was one of Salisbury's grander coaching inns and must once have been the scene of a good deal of noise and activity as the stage coaches clattered down the street and turned into the inn yard. 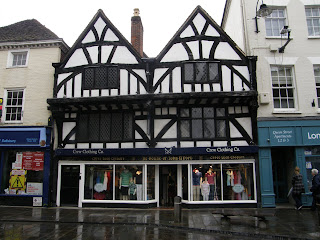 The House of John a'Porte who was a wealthy wool merchant and six times mayor of Salisbury. The house was built in 1425. 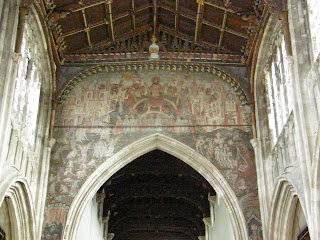 The church of St Thomas Becket was originally built around 1220 as a place of worship for the craftsmen working on the building of the cathedral but the present building dates from around 1450. Over the chancel arch is the largest 'Doom' painting in England dating from around 1475, the offering of a grateful pilgrim safely returned from his journey. It was whitewashed over at the Reformation and rediscovered in the 19th century. 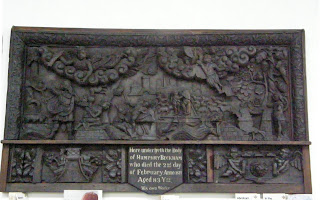 It isn't everyone who carves their own memorial! Humphrey Beckham was Chamberlain of the Joiners Guild in 1621 and Warden in 1635 and obviously intended to be remembered. 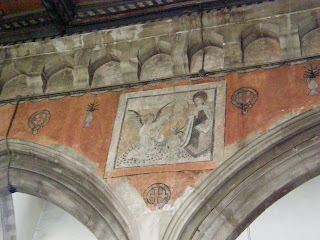 In the Lady Chapel of St Thomas' there are more medieval wall paintings, this one is The Annunciation.... 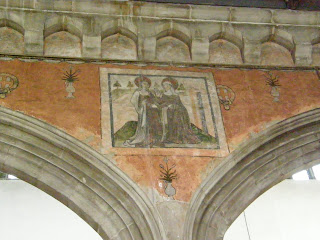 .....and this is The Visitation. Paintings of The Visitation are quite rare in English churches partly because the churchmen considered it an 'indelicate' subject! 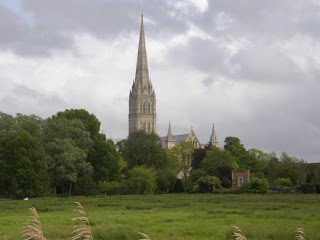 Eventually the rain stopped and I decided to walk through Harnham Water Meadows to see the view of the cathedral which John Constable painted though in 1831 the Meadows seem to have been rather more watery than they are now, though judging by the rainbow in his painting it was raining while he was in Salisbury too! 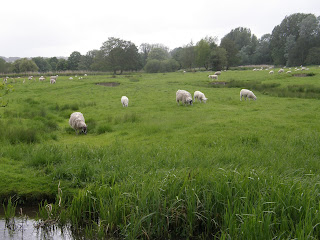 It was really nice to get out of the busy city streets and walk through this lovely rural scene. 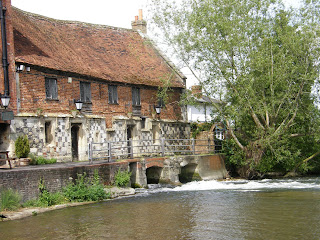 This lovely old building dates back in parts to the 12th century, in 1550 it was rebuilt and the course of the River Nadder was diverted to flow under it and it then became Harnham Water Mill, Wiltshire's first paper mill. It's my favourite of all the buildings that I saw in Salisbury. 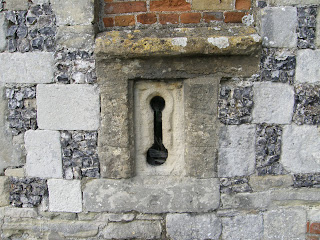 This is a detail from the walls which I found both fascinating and beautiful. I think this is the original 12th century part 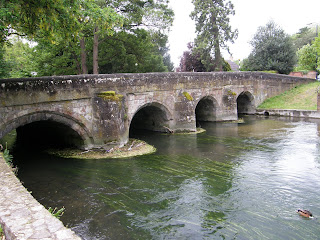 I crossed the 15th century Crane Bridge over the River Avon as I walked back into the city to retrieve my car and continue the journey to Dorset. I think there is still a good deal of interest for me to see in Salisbury and I'd like to go back there - preferably on a nice,dry day next time!
Posted by Rowan at Monday, June 01, 2009

I loved the tour...I think the dark clouds enhanced the journey you took us on...The carvings, paintings, and statues were grand...but the craftmanship of the walls at Harnham Water Mill was a favorite of mine...such simple beauty.

I really like Salisbury. The cathedral is beautiful too.
I really enjoyed your tour..thank you ;-)

Oh the history - it makes my heart ache to visit a few places like you showed today - such memories those buildings have - such age - such magnificence. Thank you so much for sharing.

I enjoyed this so much. I've wanted to visit Salisbury ever since I read Edward Rutherfurd's book Sarum. Your post did not disappoint. It looks packed with history.

and i just love those old buildings~so much history

I've never visited Salisbury, but it looks delightful - definitely one to put on the 'list'!

Thanks for your kind comment about my new 'girls' - all is well in the hen house!

Hi Rowan, lovely images of Salisbury. Where you took the Poultry Cross, if you turn around and go in the opposite direction there is a lovely cake shop along there. The Harnham Water meadows are always worth a walk along. I have stayed in the pub by the Water Mill as well, lovely area. As usual the Cathedral had scaffolding on it spoiling the image. I cant remember a time when it didn't.

I've enjoyed visiting Salisbury with you Rowan. So much to take in, I think you definately need another visit.

I haven't been to Salisbury but you make it look well worth doing so. Seeing places in the rain is an occupational hazard in UK, wouldn't you say?! Except for this weekend!

I really enjoyed your tour, Salisbury looks waonderful - aparently I was taken to see the Cathedral when I was a child but don't remember, of course:) Love the paintings in the church and the water mill looks very interesting.

The architecture is just beautiful! Such ornate buildings but I think my favorite is your favorite....the old paper mill.

Another great tour!! And I didn't even need a passport.

Ah, beautiful Salisbury! (And finally, one of your posts is about someplace I've actually been LOL.) We LOVED Salisbury. I learned several new things from your post though -- you're better than any tour guide could ever hope to be!

I haven't been to Salisbury, yet! I will be back as soon as I can. As usual, your beautiful pictures and the history and stories of places have me delighted to have found you :) ~ER~

Fabulous post Rowan, your posts are always so interesting and your photographs are splendid! I liked the Oak Apple Day post too :o)
Many thanks
x
Sumea

Another busy week for you Rowan! I love reading about your trips and adventures and your photos are always a joy, thank you!
Kimx

Thank you for your details on Salisbury.

I have been there, but it was on a very hectic and traffic congested day on the way to Cornwall on holiday. I saw more of the car park than the town itself; but what I did see I liked.

Thanks for the walk, you brought back such sweet memories! I was there in 2004 and I remember how much I enjoyed visiting Salisbury, on our way to Stonehenge.
Gracie at http://mylittleplace.blog.com

I recognised all those spots. I love the little Museum by the Cathedral Close and have had picnics in front of the lovely Cathredral many times (though personally I prefer Wells).

I love armchair travel with you!
That photo of the cathedral spire is breathtaking! The city streets with ancient buildings are so interesting, and you are such a good tour guide!
i hope you do go back again!

I have never seen the Noah's Ark carving before. So wonderful! What a lovely day you had. Thanks so much for sharing it!!

Oh yes, I read every word and enjoyed how much you appreciate every carved story and tidbit of history. You know so much about so many things that you make it more easy to understand. I'm grateful to you for that. I fear that all of this will pass and no one will have known. For you to record it is wonderful.

I'll never be able to see such things and so it was a double treat for me. Thank you.

I am enjoying your tour with you. You have visited some lovely places.

Such old buildings are amazing to me--and pull at my heart to see them. The pictures make me feel like I'm visiting them with you.

You knew I would love this post, didn't you? I have always wanted to live in a half-timbered house. I remember the book "The Pargeters", I think, by Nora Lofts? I must be one of the very few Americans that knows what pargeting is.