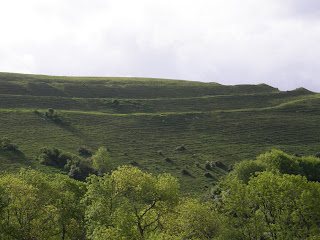 On my third day in Dorset the weather was decidedly better and I decided to go out early and climb Hambledon Hill which is very close to Iwerne Minster. Not only is Hambledon Hill an Iron Age hillfort of international importance but it is also a National Nature Reserve which is home to a wonderful array of wild flowers, grasses, butterflies,insects and birds. The photograph above shows the impressive ramparts of the Iron Age fortifications. 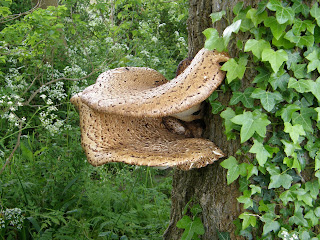 I started by climbing a path through a woodland area and came across this rather impressive bracket fungus on one of the trees. 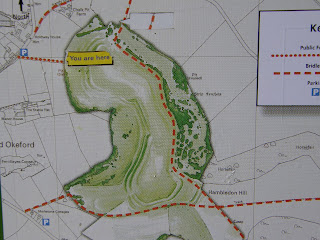 Just to give you an overview of the site and help you get your bearings, I came up the path next to the P marked on the left and then turned right to begin my climb and when I reached the top I walked to the southern end and then turned and walked down the centre of the hillfort from south to north and eventually back to my original starting point. Clicking on any of the photos will enlarge them so that you can see more detail. 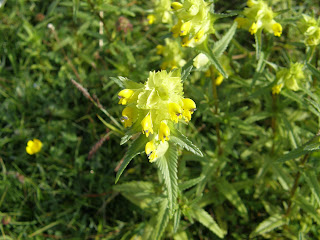 I approached from the west side of the hill which is about 470 feet high so is quite a steep climb. Rather than go straight up I started walking round and gradually climbing as I went. The thin chalk grassland was awash with flowers, I am making no firm statements about the one above but I think it's yellow rattle. As I climbed steadily up and round I was lucky enough to have two seperate sightings of a red kite, a bird I've never seen before. Both flew up right in front of me so I had a really good view of them, they were gone before I could photograph them though. 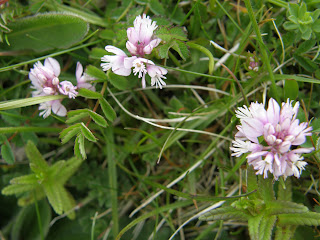 I'm even less sure what this is but have decided that it might be a milkwort of some sort. 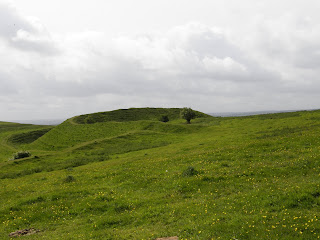 People were occupying this site long before the Iron Age, this is part of a Neolithic causewayed enclosure which dates back over 5000 years to between 2900BC and 2600BC. 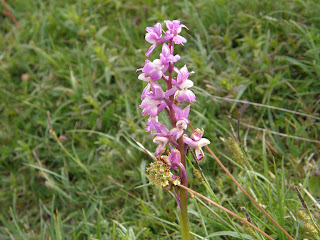 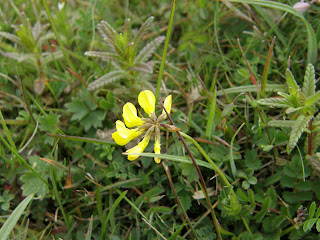 I think this is Horseshoe Vetch but am open to correction - if it is it is the food plant of two rare and beautiful butterflies - the adonis blue and the chalkhill blue both of which are found on Hambledon Hill. 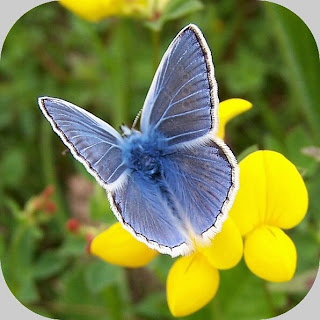 These two photos are taken from the web - I only wish I'd had the privilege of seeing these beautiful butterflies myself. The chalkhill blue is on the left and the adonis blue is on the right. 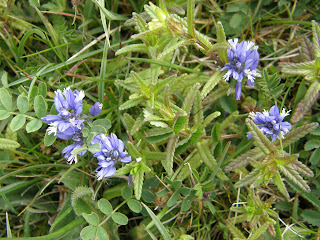 This is another milkwort - chalk milkwort I think. There are several kinds of milkwort and telling them apart isn't easy. 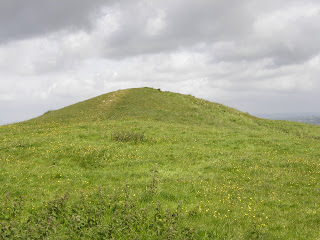 This is a long barrow, a Neolithic burial chamber, it lies at the highest point of Hambledon Hill and is 230ft long. I am standing at the narrow southern end about to walk up and over the top. 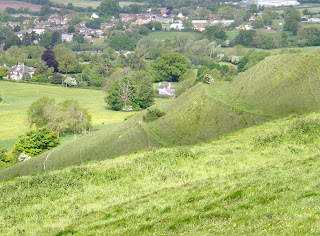 Looking out over the village of Childe Okeford and showing clearly the steep ramparts that were built using only picks made from deer antlers, wooden spades and shovels made from animal shoulder blades. Can you imagine the effort involved in making something like this using only these tools? These people must have been both physically fit and mentally strong to have the vision and staying power to build on this scale. The area enclosed by the ramparts is about 30 acres! 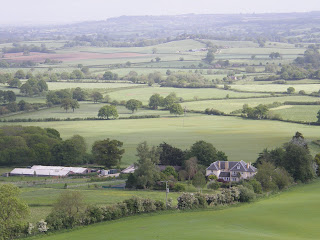 A somewhat hazy view over the lovely Blackmore Vale, still a lot of cloud around but it was warm and dry and I was willing to settle for that. 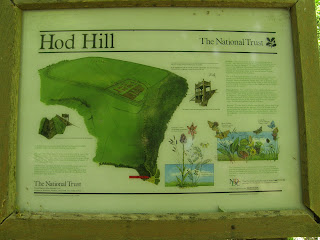 I'd arranged to meet up with friends in Sherborne in the afternoon but as I drove along the road from Childe Okeford ( I love this name!) I passed a layby that I thought might be the access to Hod Hill, another Iron Age fort practically next door to Hambledon Hill. I turned the car and went back to check and I was right so I decided I still had time to go and explore. 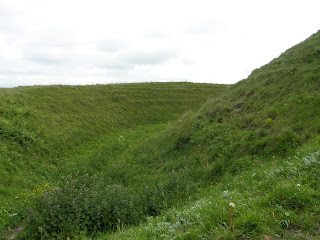 Hod Hill is the largest Iron Age hillfort in Dorset and was home to the Durotriges, the Celtic tribe who occupied this area of Britain. Around 43AD it was attacked and taken by the Roman Legio ll Augusta commanded by Vespasian who later in his career became Roman Emperor. The photo shows part of the double bank and ditch defenses - it's quite a steep climb getting up there. It was unusual for a hillfort to be re-used by the Romans but in this case they built an auxiliary military camp in the north west corner. On the ground I could see the lumps and bumps where it had been but there was nothing that would really show up in a photograph. If you click on the previous photo there is an artist's impression of the Roman fort which has been excavated so they do know exactly what was there - apparently 600 legionaries and 250 cavalry were garrisoned here. 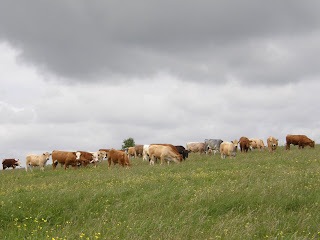 I walked all round the perimeter but even though it is larger than Hambledon Hill it doesn't compare for either beauty or atmosphere, it was a pleasant enough walk but nothing more. It did have its interesting moments though. Click on the photo - can you hear the conversation? 'Hey boys, look over there! Who's that? Let's go and check her out!' 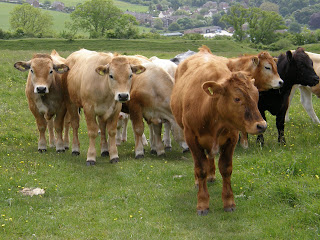 They all came ambling over, curious as cows always are. There was no threat but they all started trudging along behind me so finally I turned round, held up my hand like a policeman and said 'Halt' and to my utter amazement they did. 'Okay, what now?' enquires the leader of the herd. I explained that I had nothing interesting for them to eat and that I was really pretty boring so there was no point in them following me. 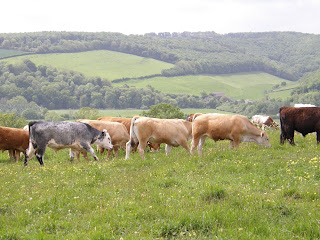 There was obviously some discussion and then they decided that actually I was a bit of a disappointment on the entertainment front and, with a little encouragement, they turned aside and wandered off again. They really were as close as they look in the middle photo,I'm not using any zoom - actually they all posed rather nicely I thought:) 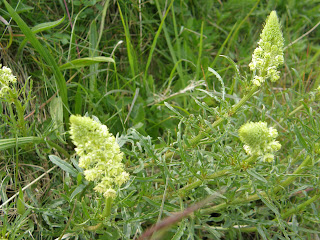 Like Hambledon Hill, Hod Hill is rich in wild flowers and butterflies, this is wild mignonette which I thought was very pretty, I've never seen it before. 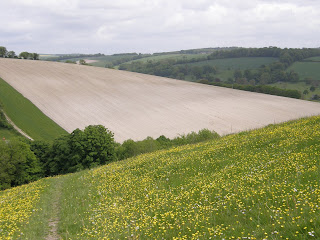 This is a very ordinary sight, a field thick with buttercups which I walked through on my way back to the car. Buttercups may be common but seen en masse like this they are really beautiful. I went on my way to Sherborne well satisfied with my morning, it was full of historical and botanical interest, I'd had a good deal of exercise and I'd had both places virtually to myself to drift and dream to my heart's content.
Posted by Rowan at Saturday, July 04, 2009

What an amazing variety of flowers - so sad that they are not more widespread. What a wonderful place, another one to mark down for visiting.

(I think your 'girls' are 'boys' though, looking at their underbellies...)

Cloeser inspection shows that you are quite right PG - text now edited to the correct gender:)

I'm wondering how I missed this earlier in the week. I enjoy both history and nature--plenty of each in this post. Cattle are so nosey. You telling them to "halt" immediately makes me thing of "Out of Africa" with Isak Dineson flapping her hands and shouting, "Shoo!"

Hambledon Hill looks wonderful - so atmospheric - it looks as though when you get up there you can breathe the history of the place in the air - and to see a red kite too - must have been magical. Your posts are always so informative and I've thoroughly enjoyed this one:)

oh rowan, my old 'stamping ground' how wonderful to see it again! that has really made my day! we lived in the shadow of bulbarrow hill which had a hill fort and a medieval trackway and just beyond was hod hill! i have never missed living there quite so much as when i read this post and saw your photos. thank you so much

Great scenes Rowan, Your right about the Milkworts and the Vetch and it is a Yellow Rattle.
Cows (Well steers actually {:) ) get a bad press. They would be OK with you as long as you don't have a dog with you.
Everyone that are not familiar with cattle appear to be under the impression that they are dangerous in some way. In their genes cows/steers/bulls have the instinct handed down from their forefathers about wolves being a threat and rightly so. All dogs are descended from wolves and therefore appear as a threat. So when in some number, cattle will attack the threat and if the dog handler gets in the way then he/she gets injured unfortunately.
Some bulls can be a problem on their own, oddly enough the main threat would come from an otherwise insignificant little Channel Island bull. Small that they are, they are not to be trusted.

Super post Rowan. So interesting. Thank you.
(PS I don't trust white cows (Charolais?)- after being charged by one when I was little. Minding my own business crossing a field - the Friesians and Herefords took no notice of me, but I heard galloping feet behind me, just in time I turned and waved my arms in its face and diverted it!)

Lovely photos - I've yet to get to Hambledon Hill, but beenr oudn and about it many many times! Lovely flower photos, thanks for sharing.

A wealth of history once again. While these hill forts are impressive seen from afar, so that one can appreciate the scale, I've never really had any great enthusiasm to walk up them! The effort of creating them though is something to be admired. Thanks for all the flora info too.

Despite Roy's reassuring words, I'd always be a little wary of cattle, not being a country boy!

Finally, I'm now noticing a problem when I visit your and one other blog that has this playlist. The licensing regulations no longer allow us to hear it in UK, which seems to make my screen freeze! I wonder if anyone else suffers?

Lovely pictures, I love all the wildflowers. The landscapes are so beautiful. I love those cows too ; )
Have a fantastic day !!

A very interesting post about the Iron Age hill forts. You said the ancients must have been very strong physically and mentally. You must be also - to do all that walking.

Thanks also for showing us your beautiful English wildflowers. And the cows - funny!

What a lovely walk with you. The hill that I live on, Queen Anne Hill, is just a bit shorter than the one you did. And, it's best to traverse the edges to reach the top although my teenage son likes to run straight up.

I love all your photos, but those (from the web) of the blue butterflies and yellow flowers took my breath away! I'm sorry you didn't happen to see those stunning creatures!