A Woolly Rabbit and a Spring Outing 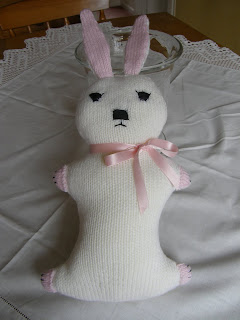 For the past few weeks my mind has been a total blank as far as ideas for writing blog posts, e-mails and letters were concerned. I've been busy doing things but the constant grey skies appear to have caused my mind to switch off completely. The last few days of lovely blue skies and sunshine have done the trick though and my e-mail in-box is now empty, all the letters are winging their way to various parts of the UK and overseas and here I am finally writing a post. 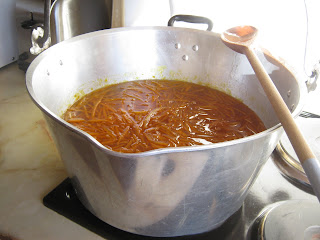 While I've been absent I've made a dozen jars of Seville orange marmalade. It's the perfect job for a miserable, grey day as working with all the lovely bright orange fruits is a very cheering task. 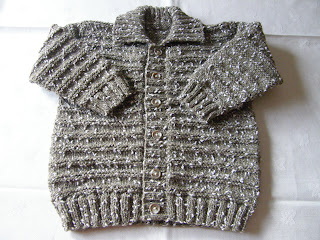 I've been knitting as well, a cardigan for Gabriel and a rabbit (top photo) for George. When my children were young I used to make a lot of these rabbits and also.. 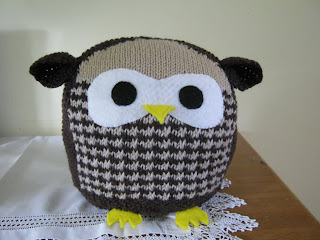 ..this owl for the school fairs that were held at Christmas and in the summer. I made an owl for Gabriel last summer and have been intending to do the rabbit for George ever since. It was posted earlier this week and was, I gather,very well received:) 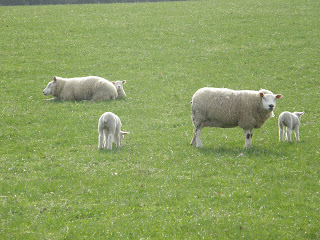 On Saturday afternoon I joined members of our local history group on a visit to Fanshawegate Hall. Several of us met up on Totley Hall Lane and walked up through the fields. There were no rabbits, woolly or otherwise, but there were lots of lambs enjoying a lovely Spring day. 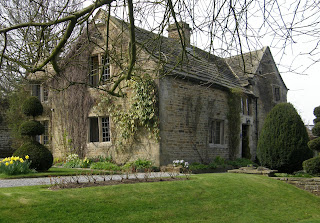 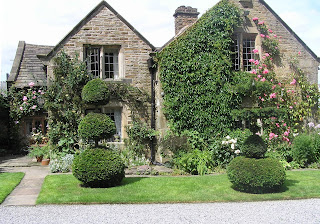 I've visited Fanshawegate Hall many times before as it is open every year under the National Gardens Scheme, it was interesting to see it so early in the year when it wouldn't normally be open to the public. The top photograph was taken on Saturday, the one below is from a previous visit in the height of summer. It's a very old house and was owned by the same family, the Fanshawes,for nearly 700 years until it was sold in 1944.In its entire history only four families have owned it including Mr and Mrs Ramsden,the current owners. Most of Fanshawegate Hall is 16th century but parts date back to 1260 including the dining room and parts of the cellars. In the 16th century it was a substantial manor house but by the early 17th century a large part of the original hall had been pulled down and it became a farmhouse, still owned by the Fanshawe family but rented out to tenant farmers. Much of the stone and timber from the demolished part was used to build Woodthorpe Hall which still stands further down the lane. 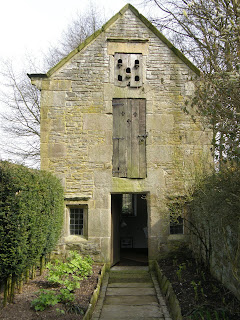 The three storey medieval dovecote still has the original inch thick Elizabethan glass in its windows. It's a lovely building. 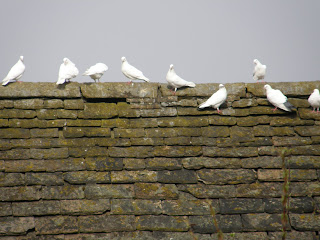 It is still used for its original purpose and is home to these beautiful white fan-tailed doves. 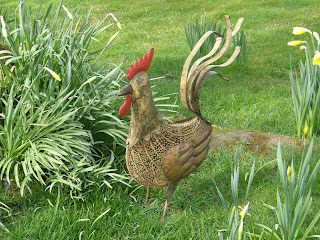 We were really here to see the house and learn about its history but there was also time to look around the lovely garden and spot charming inhabitants like this cockerel. Isn't he great? 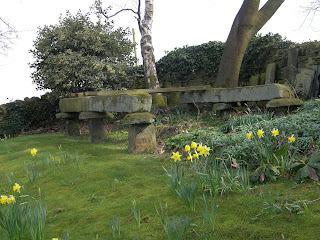 There are many reminders of Fanshawegate's farming past around the garden, here you can see six beautiful old staddle stones topped by enormous stone beams and then wooden planks laid across the beams. This would have been the support for a great hayrick which would be built on here to protect it from vermin and to keep it dry. 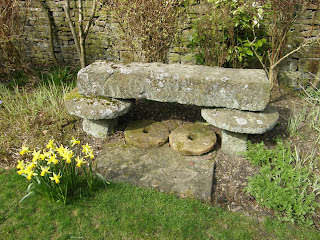 I would give my eyeteeth, as the old saying goes, to have just one single staddle stone in my garden. At Fanshawegate they are all over the place, all the real thing, leftovers from its days as a working farm. 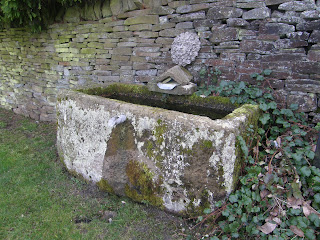 Other relics of farming days include this magnificent stone horse trough which has been turned into a water feature with a Green Man watching over it. 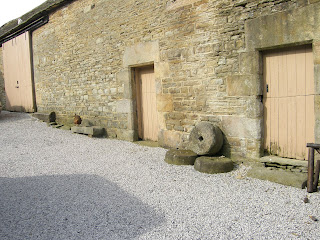 Behind the house is the stack yard complete with a marvellous medieval tithe barn, the photograph doesn't do it justice as on this side it was largely hidden behind the parked cars of members of our group and on the other side the sun was shining straight into the camera lens.

At the bottom end of the stack yard is the old farm pond complete with ducks. 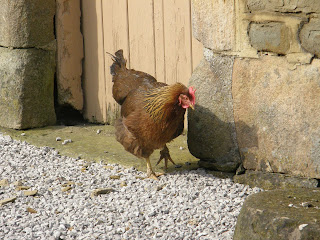 A sight that would have been as familar 700 years ago as it is now, a comfortable looking hen pottering about in the sunshine.

The most thrilling part of this visit for me(apart from the scrumptious homemade cakes that Mrs Ramsden provided for us in the 13th century dining room!) was that I was able to fulfil a long held ambition. Every time I have visited the garden I have thought to myself 'I'd love to see what it's like inside the house'. The Hall itself isn't open to the public but on this occasion we were fortunate enough to be invited in and allowed to wander at will both upstairs and down. There are no photographs as it's a private house and I wouldn't want to abuse the privilege we were given but it's great to know that next time I go to a 'Garden Open' day I shall know exactly what lies behind those ancient stone walls!
Posted by Rowan at Saturday, April 10, 2010

What a beautiful post Rowan - from your great knitting projects (lucky kids) to the historic tour of a wonderful property. Love the stone trough with the Green Man.

Glad you are getting some good weather at last. Staying in and making marmalade is worthwhile, probably made a grey day 'sunny' while thinking about and smelling the oranges.......marmalade is my favorite! Now you Brits need real sunshine as it was a long, cold Winter.

My trip is coming closer - just a month to go! I've been watching the BBC series - "Number One Ladies Detective Agency" set in Botswana - such fun. Author of the books (I'm reading them too) Alexander McCall Smith, will be here in Raleigh signing his latest book next week - I shall definitely attend and try to have a word with him - Botswana is his favorite place!

What a lovely trip - and wonderful photos. Thanks for sharing.

So happy you're back! Your time away seems to have been productive. I love the knitted sweater and the stuffed animals...the marmalade doesn't look too bad either ;) Your house/garden tour looks great. I have a great love and obsession for houses/properties and have a very curious side that makes me wonder what certain houses look like inside. I know how you feel, being curious about that property all this time...how great that you were able to tour it! Loved your post, glad to see you back and blogging :)

I have been wondering about you! I took a blog break a bit earlier and was absent for a couple of weeks, too.

This is such a wonderful post. You do the BEST tours! The stone house is beautiful and I'd love to see inside. Lucky you!!

What a lovely post Rowan and how lovely to be shown the INSIDE of that lovely house, instead of just seeing the gardens. I am envious!

Like you I haven't felt at all in a writing mood for weeks - all year to be honest. That awful winter was responsible, I shall put it down to S.A.D.

Loved the knitted things and can imagine that the recipient of the rabbit was Very Happy Indeed!

I will try and finish my long-overdue reply to your letter this evening . . .

Hi Rowan nice to see you back I wondered where you had got to. Glad everything is okay and you seem to have been very busy in your absence. Sometimes you have to absent yourself to get things done. I particularly like the photos and the knitted rabbit. Glad you okay and take care

Oh Rowan! You have absolutely the best adventures! This looks like a fantastic place to be able to visit. Your pictures are stunning -- and your narrative is even better. Thanks for taking us with you!

I've been hoping you would appear with a blog post--you make even the ordinary things interesting.
Getting right inside a wonderful old place and learning more of its history is always a treat.
Winter was so long this year that I think we all became impatient with even the best of cold weather pastimes. The walk aross the fields sounds like a fine part of your outing.

Thank you also for a lovely post and another little bit of the England I would love to see more of.

My God, how much I love english countryside and all the beautiful houses there! Thanks for sharing.

It is lovely to have you back,I've really missed your posts.How lucky to go to that gorgeous house and br allowed to go inside.I have a great desire to see inside certain houses that I have admired all my life in our local area.Sometimes my wishes are granted,as my daughter is a partner in a local estate agents,she takes me to view if any of them come on to the market.

Great to see you back - and with avengeance too Rowan! i'm hoping to get to Fanshawe Hall on an open day this year - thanks for the inspiration. Great knitting!!

What a nice surprise on this chilly rainy morning...a wonderful tour of the English countryside and the grand Fanshawe Hall. What a treat for you to be able to go inside! I loved the lovely knitting also! I WISH I could get past dishcloths and scarves!