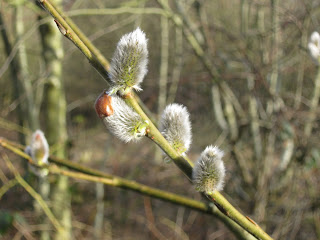 With apologies to Gertrude Jekyll for borrowing one of her book titles:) I took these photos earlier this week so that I can actually show you some little bits of Spring rather than just talking about it. The strong winds that we've had have brought out many of the early wind pollinated plants and trees. The pussy willow looks beautiful with the sun shining on it and you can see a piece of the bud's protective casing still clinging on here. 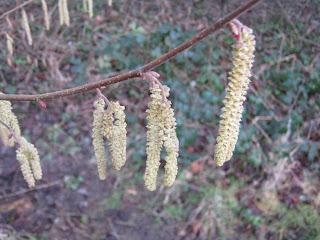 The tightly furled hazel catkins have turned into lamb's tails now and if you look carefully you can see the tiny red female flower tucked into the angle between the catkins and the branch. You will need to click on the photo to be able to see it unless your vision is a good deal better than mine. 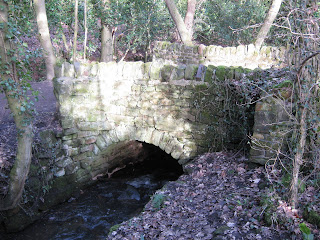 I've mentioned in previous posts that the Limb Brook which flows through Eccleshall Woods formed the ancient boundary between the Saxon kingdoms of Mercia and Northumbria and later between Derbyshire and the West Riding of Yorkshire. The area is full of small streams which flow down from the moors and into the Limb Brook and other local rivers. This pretty little stone bridge carries the path over one of the steams at the point where it joins the Limb Brook. 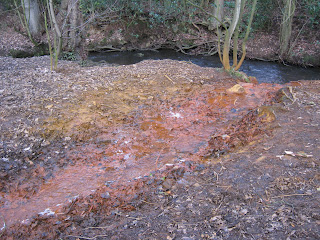 This little stream is always stained  red by the ferrous iron which lies in a disused coal seam under the fields near the woods. At least I think that is what my DH meant when I asked what caused it. He has a degree in geography with geology as a second subject and he used a lot of long complicated words which he obviously thought that any fool would understand. After he'd said it all three times I decided I'd better not ask again:) 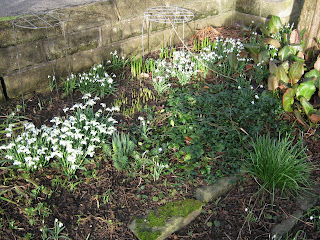 Snowdrops flowering in my front garden, the large group on the left of the photo are a lovely double snowdrop, I was given five bulbs many years ago by a gardening friend who has written several books on the subject, he told me that they are called 'Ophelia' though I've never come across a snowdrop of this name in any bulb catalogues. 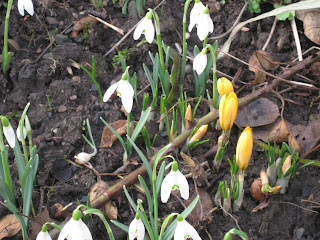 As I got in the car on my way to the woods I caught a glimpse of yellow among the snowdrops and there they were - the first lovely bright yellow crocuses. 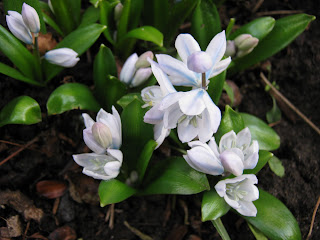 Another surprise in the small bed opposite my back door, I always forget these pushkinias are there until the leaves start pushing through. They have a beautiful delicate sky blue stripe on the backs of the petals, clickon the photo and have a closer look. 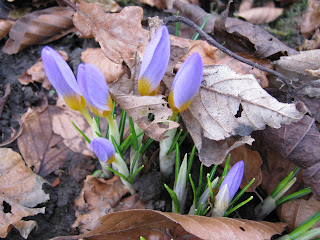 Another surprise, these were planted a few years ago and I think they are called 'Queen of the Blues'. They are very early for a Dutch crocus, I think being tucked away under piles of dead leaves might have brought them on a bit. 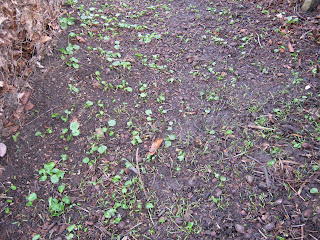 I know that this is looking rather boring at the moment, it's the little woodland area at the bottom of my garden and in a few weeks it will be a sheet of gold, these are the leaves of lesser celandine coming through the bare earth. They were there long before our house was built when this area was a shady hedgerow path through the fields. 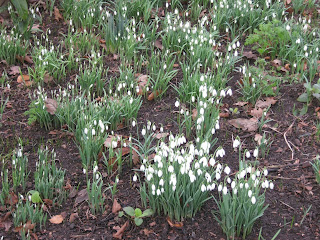 In a recent post (Gardening in January) I showed a patch of woodland with the spears of snowdrops which had been buried deep under dead leaves so deep that some of the spears were yellow rather than green from lack of light. Here it is looking rather better now, still not exactly a swathe of white but definitely showing promise. From now on things will gather pace and more and more shoots and buds and flowers  will start appearing, the weather may still have a good deal to throw at us  -  rain, wind, frost and quite possibly snow but also there will be days with blue skies and sunshine and one day soon we shall feel the heat of the sun on our backs again.
Posted by Rowan at Friday, February 11, 2011

You really are getting lots of signs of spring. I love the photo of the old stone bridge....it just seems so mystical and romantic.

I think it may be too dry for snowdrops here, which is a pity because I've fallen in love with them. Thanks for sharing yours.
(8>)

It was lovely to see you yesterday (and I still think your garden looked so pretty, with the promise of lots more to come).

I always thought of Wessex as never extending much beyond Oxford! Just looking up the history now . . .

You are, of course, absolutely right BB. The boundary is between Mercia and Northumbria not Wessex and Northumbria. I've changed it now - as you know my mind was on other things when I was writing that. My excuse is that the local school used to have two buildings, one Wessex the other Mercia so the two are connected in my mind and I put in the wrong one!

AH!Delightful Spring, I can smell it! I'm sure Gertrude wouldn't mind you borrowing.

ohh its all looking lovely!
we have all kinds of things bursting through the soil now their blanket of oak leaves have been cleared a little.
our forsythia looks like it will flower any day now.
its very mild here now and i am hoping we have said goodbye to the frosts.

we have a small small over 'the common' and it has always had a small inlet like a spring that is the same brown, i always told my sister it was something to do with iron :D

Regarding the long complicated words, you must have understood enough to know that they were repeated.
...Tramp

Love the new header photo, very bright and cheery!
We finally have snowdrops here too, and when it stops raining I will get out and take some photographs of them, the daffodils are also poking out of the ground. It's amazing, it seems as if one day there was nothing and suddenly everything is bursting forth!
x

Well, I'm properly envious of your early bits of spring—early by my riverbank standards, anyway. Here there's still snow on the ground and ice shelves along the stream, though today and throughout the week ahead (if the weather forecasters get it right) should see daily highs well above freezing. Maybe the snow and ice will soon disappear.

For now, your green photos of arriving spring will have to do.

Isn't it wonderful? I do think England is the most wonderful place to be in the spring time. We are having a glorious Saturday in the Cotswolds!

Your glimpses of Spring cheer me - I know after this weekend of warmer, sunny days I too may have beauty peeking out of the damp, dreary looking garden! Fortunately we are not buried by snow like much of the US this Winter. We had a dusting on Thurs. morning making everywhere look so clean, however it had melted before noon!

Enjoy these pre-Spring days Rowan, they are truly invigorating after such a long, cold Winter - and Spring in England is always so beautiful!

Spring is coming sooner to you than us, little is blooming here. Thank you for the catkin pictures! I love pussy willow!

What a lovely inspiring post, you have some pretty spring flowers in your garden. There are definite signs of Spring on the way now. I've seen pussy willow and snowdrops on our walk along the riverside this morning. I was interested in the Limb Brook and wonder how it got its name? Limb is one of the family names I am researching at the moment mainly around the Nottinghamshire/Derbyshire borders:)

We are looking for signs of Spring here. However, we still have lots of snow on the ground. Warmer temperatures next week should take care of that.

What brilliant signs of spring Rowan - however watching the weather forecast, I cannot help thinking that we are being lulled into a false sense of security - I hope I am not wrong.

Its very grey and rainy here at the moment, although we did have a little sunshine today.

Thanks for sharing your lovely spring pictures. My daffs are coming through in the garden, but it still feels so dreary!

Lots of colour coming along Rowan and what a lovely old bridge.

I haven't seen pussy willow for quite a time but there are plenty of catkins here now too, they always, always make me smile. I don't think I would understand about ferrous iron etc either, and I've always understood the colouration to be the result of peat die leaking into brooks and streams ~ plenty of that here too after a steady drizzle for hours.

Wonderful photos, Rowan. The stone bridge with the stream would make a lovely framed picture. Your DH sounds a bit like mine who has a geology background. I get long embellished, technical answers to my geological questions. I just nod a lot and say huh-huh...

A little love on Valentine's Day.
Greetings from the Ebro Delta, Spain.

Lovely photos...so great to see all these signs of spring, especially the pussy willows and catkins. I grow some double snowdrops, but don't know the variety, and some taller ones that my sister gave me out of her garden.
Your post has really cheered me up. Mx

Rowan, thank you for that taster of Spring loveliness, just the thing to cheer up a dull afternoon. x

Thank you so much for the wonderful pictures. Spring is really nearly here.
Have great day.

How very beautiful Rowan, you definitely have a touch of spring, sorry had my eyes on thoses pussy willows for clipping right away. Just ice and snow here for a while longer. Do enjoy the serenity of an early spring.
Have a wonderful Thursday,
Rosemary...XX

Lovely spring photographs. I`m glad I am not alone in getting excited about celandine leaves!

Beautiful photos Rowan:) I need to plant snowdrops so the bees have some early forage. Thanks for the reminder! xx