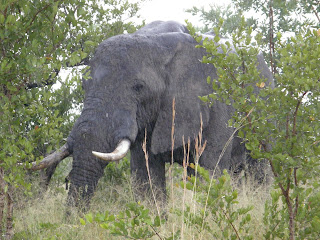 I'm finally back again with another post about my trip to South Africa. There is so much to do in the garden at this time of year and in the UK you can never be sure how long the good weather will last so I tend to make the most of it while it's here! The forecast for the rest of this week is good though so I'm going to get this done before going out for another gardening session.
We had two visits to Kruger National Park but neither was especially great as it's the wrong time of year, the grass is very long after the summer rains and it's hard to spot the animals even when they are fairly close by. We didn't see any of the big cats at all sadly but the animals we did see we got pretty close to, the photos are a selection from both days. Above is a huge bull elephant who was right by the side of the road. He made it clear that he intended crossing and that we were in his way so Steve reversed a short distance to let him pass. 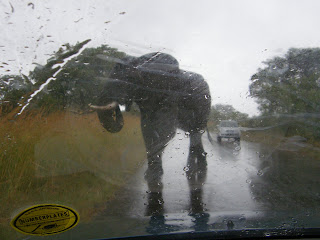 This isn't a great photo but I put it in to show just how much it was raining and just how close we were to the elephant. 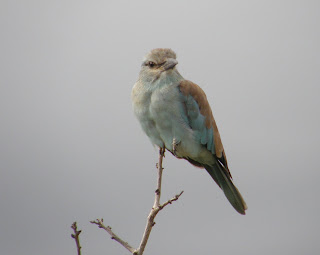 There is a lot to see besides the big animals, there are many beautiful birds for instance. This is a European Roller and you can see from the sky in the background that we weren't having the greatest of weather! 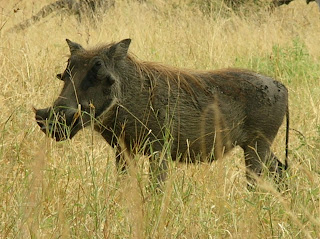 This photo was taken by my daughter as most of the good sightings we had were on the side of the car where she and Steve were sitting so I found it hard to get good shots a lot of the time. This is Juliette's favourite animal - a warthog. I must admit that I rather like them too. 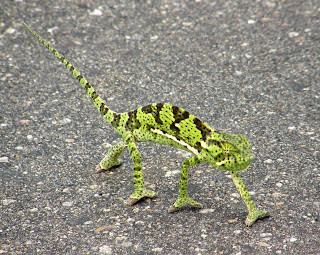 Steve is very good at spotting small things at the side of the road, while we are all shouting 'elephant, elephant' he's busy shouting 'chameleon' or 'dung beetle'!
This smartly dressed chap strutting along the side of the road is a chameleon of course. It's worth enlarging the phot so that you can see his face and the beautiful markings more clearly. 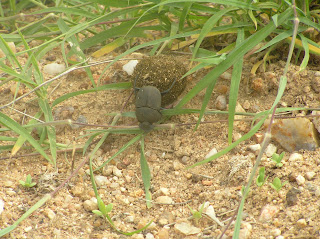 We didn't actually see any dung beetles this trip so I am cheating and putting in this photo taken when I was there in 2004. They are amazing little creatures and I can still remember watching as he staggered across the road pushing something that was 3 or 4 times his size. 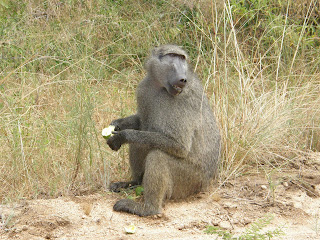 One thing we did see a lot of was baboons invariably in big family groups. This one was sitting by the roadside peacefully enjoying what looks remarkably like an apple. 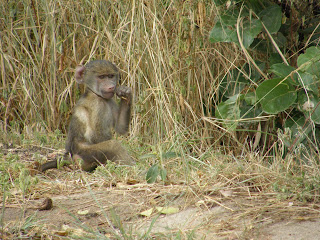 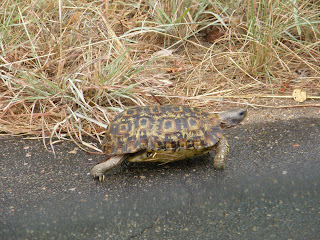 This is the nearest you are going to get to seeing a leopard in this post! A leopard tortoise pottering along the road. It's actually very interesting to see this kind of thing. I suspect that a great many people are so busy looking for lions and elephants that they miss the smaller and often equally interesting creatures. 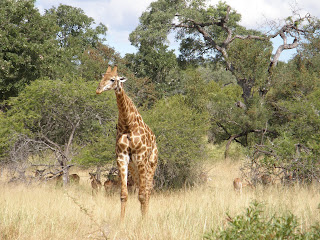 If you enlarge this you will see impala in the background. There were actually four giraffes but they were never close enough together to get them all in one shot. We saw quite a lot of giraffe but they were surprisingly hard to spot among all the trees and undergrowth. The Southern Ground Hornbill is the largest of the hornbills and is increasingly rare. They are mostly only seen within game reserves now and they are not all that common even in a protected environment so we were lucky to see them and especially as close as this. They were within a few feet of the car and I was the one who spotted them:):) 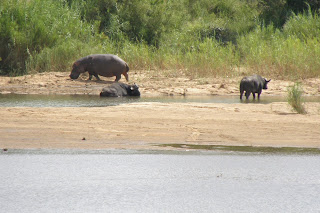 The hippo and two buffalo were on the other side of a fairly wide river but fortunately we had binoculars with us so were able to get a good view of them. 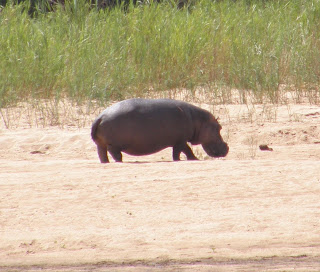 I've cropped one of my photos of the hippo so that you can see him better. 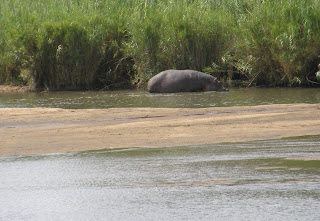 Same hippo but he's trundled along into the river now. 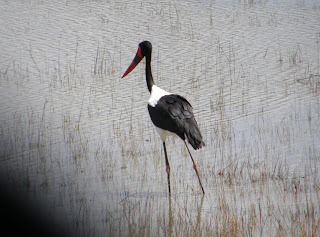 This handsome bird is a saddle-billed stork. They are huge birds and the males can be up to 5 feet tall with a 9ft wing span. 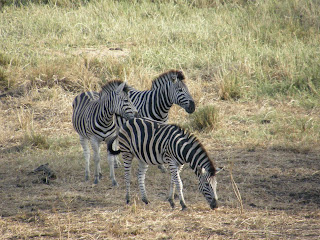 We were fortunate to get a really good view of this herd of zebra, you don't see zebra anything like as often as you'd think. 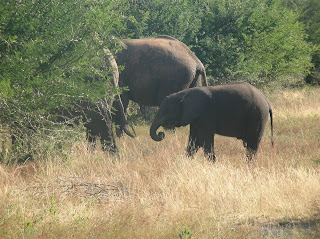 Another of Juliette's photos, the baby elephant was on her side and my view was also blocked by an excited Kaitlyn leaning across in front of me:) 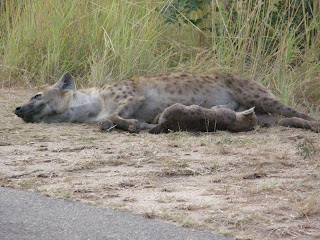 It was the end of the second day and we were heading towards Phabeni gate when we saw what was the best sighting of all as far as I'm concerned. This female spotted hyena was laid by the side of the road suckling her cub. I never expected to get as close as this to a hyena. 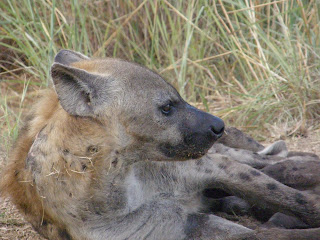 She raised her head to look at us as we sat watching but gave no sign of being afraid or moving.Hyenas have a poor public image but after seeing this they have taken their place among my favourite animals.In fact they are not primarily scavengers but are very efficient hunters who will successfully tackle prey as large as buffalo. They are highly intelligent animals too. 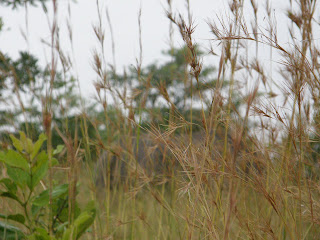 We did actually see a rhino and various types of antelope - waterbuck and kudu among them but they were too far away or too invisible among the grasses for good photos. Here, for instance, we have my rhino photograph! Not a candidate for wildlife photograph of nthe year I think you'll agree:) It does show how hard it was to see things though.
So there you have it, not all that exciting really but one or two moments worth waiting for. Other people's Africa blogs will show you lions, leopards and cheetah, with me you get chameleons and dung beetles! At least it's a bit different though:)
Posted by Rowan at Monday, April 18, 2011

Not all that exciting???? I was beside myself viewing your photos -- I think they're fantastic Rowan! How very exciting for you and your family -- maybe no big cats, the the rest of the animal sightings are wonderful. and that chameleon! I LOVE that picture. I didn't realize that their feet are so different. Thanks for sharing your photos Rowan -- now I REALLY want to visit!!!

I envy you your trip, a photo safari to Africa has always been something I wanted to do.
Your pictures were great!

These are so exciting-to imagine being that close to an elephant, or to see a hyena nursing her young. What an experience.

This is Africa too, right? I've never been there, so everything is new and worth it, to me. Thanks for sharing.

Great pictures. I love the chameleon, he looks so funny !!
Such a shame you had bad weather.
Thank you so much for sharing.

It is very exciting - and wonderful photos - what a lovely trip.

The warthog brought to mind the expression which indicates you are very irate with somebody to the point of coming to blows -- "I'm going to be all over you like ugly on a warthog."

Really lovely pics Rowan :) Love the chameleon - what odd looking feet he has, I don't think I've ever noted that before, but I suppose they help him hang on to branches. At first I thought the giraffe had a growth coming out of it's chest and then realized it was a bird!

What a wonderful experience and you have some fabulous photos - the hyaena nursing, the chameleon marching along (LOVED him!)and the atmospheric Elephant in a Rainstorm! I am envious.

I still haven't forgotten that I am long overdue in replying to your letter.

The chameleon looks like he came from a toy store, with his bright colors and odd little feet. You certainly saw a diverse group of animals, Rowan.

That looks like a once in a lifetime experience - Amazing.xx

Amazing photos! Amazing animals! Wow, I loved your post...and yes, I clicked to enlarge the chameleon, loved him! You gave me a good laugh as well with "Elephant, elephant!" "Dung beetle!" haha! Great post, take care...

Can't decide between the cameleon and the European roller as to which is favorite. I'm with you -- everybody gets excited about seeing the animals everybody knows about. It's the little details that intrigue and draw you in.

I love the photos, Rowan, my favorite being the chameleon. He (or she) looks like a small dragon.

Again, memories flooding back - I saw all these wonderful creatures too. We are so fortunate to have been that close aren't we Rowan? Love the one of the hyena with her cub. Glad the river was between you and the hippos!!! People often don't understand how dangerous they are!

Thanks for sharing your marvelous pics.

Easter blessings to you and your family.
Hugs -Mary

Truly an amazing trip! I like the European Roller.

Your incredible adventure would be my dream come true! Simply marvelous!