The Other Book Pile 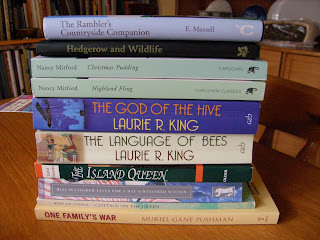 This pile of books mostly came at Christmas and I'm afraid I've actually bought one or two (or even three!) since then. These are mostly fiction and four of them I've already finished. 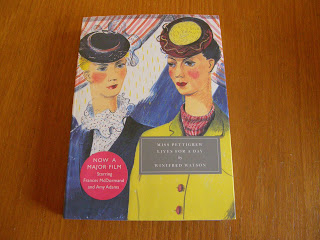 'Miss Pettigrew Lives For A Day' is a gentle book and a delightful story set in (and written in) the 1930s. Miss Pettigrew is a governess who goes to the wrong address for a job interview and gets involved in the life of a nightclub singer. I really enjoyed reading this.
I've also read both the Laurie R King books, they are the latest in a series about Mary Russell and her husband Sherlock Holmes! I've enjoyed all of them and am now waiting for the latest one to appear in paperback. I've also read Nancy Mitford's 'Christmas Pudding' as Christmas seemed the obvious time for a book with that particular title. It was OK but nothing to get over excited about. 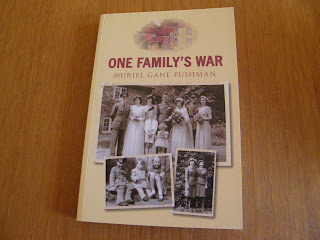 Next on my list is going to be this which is the story of a farming family in Surrey during the Second World War - always a favourite period of mine. 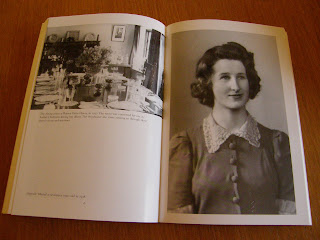 There is quite a thick section of photographs in the centre and I'm looking forward to getting to know this family. It's going to take over from 'Vanishing England' for a while. I was wrong about having read this one before - I was thinking about another book by the same author called 'Rural England Cottage and Village Life'. The latter is an altogether delightful book illustrated by the paintings of A R Quinton. .Vanishing England' is, I fear, rather heavy going and will have to be read in chunks sandwiched between more entertaining affairs! 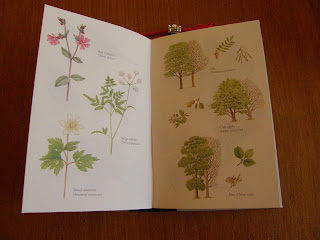 'Hedgerow and Wildlife' is a little book for dipping into and is small and light enough to carry with me if I want to have it handy on the spot. As it says on the cover it's a guide to animals and plants of the hedgerow and I especially like these illustrations showing the winter silhouettes of the three trees. It's mostly the written word though and would need to be combined with more specialist books on trees, wildflowers etc. It's more a starting point than anything else. 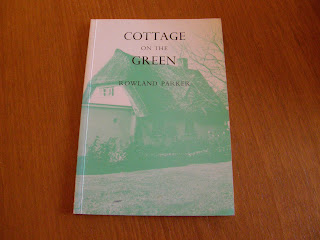 Rowland Parker was a retired teacher who lived in an old cottage in a village called Foxton in Cambridgeshire. He became interested in the history of the cottage and the people who had lived there before him and this book is the result of 12 years of research done (published 1973) before researching houses and families became a popular pastime. Thanks to John from By Stargoose and Hanglands blog for bringing this one to my attention. His blog is well worth reading. 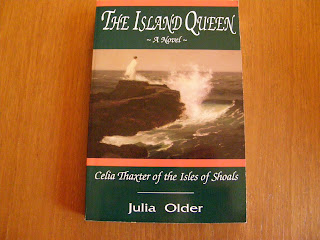 'The Island Queen' arrived in the annual Christmas parcel from my friend in New Hampshire. It's a novel but about a real person. Celia Thaxter made a wonderful garden on the island of Appledore, one of the Isles of Shoals which lie 10 miles off the coast of New Hampshire. It should be interesting. 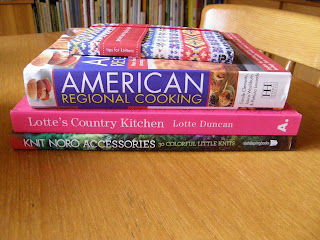 The remainder of the Christmas pile of books - I really did rather well for new books:) 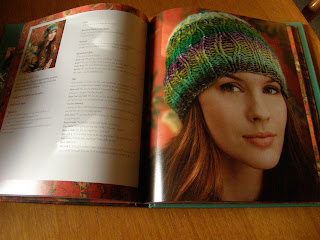 I'm very taken with this hat and shall be acquiring some Noro yarn to knit it up very shortly. Now that the weather has turned much colder and the ground is frozen I shall be able to spend time reading and knitting - since New Year the weather has been so mild that I've spent a lot of time working in my garden. Winter seems to have reasserted itself for the moment though so it's back to the more usual January pastimes.
Posted by Rowan at Monday, January 16, 2012

Good Morning Rowan ~~
Yes it appears January's cold has returned here as well.
You have a lot of interesting books to curl up with. Now Hedgerow & Wildlife caught my attention right. Hopefully the winter will get a move on! :)
Have a wonderful day,
Hugs Rosemary...xx

I loved Miss Pettigrew lives for a day - I found it very charming. xxxx

They look like fantastic books. Especially the book about the family during the war. Very interesting !!
Have a wonderful day.

Oooh - lots more lovely books. Once again, we share the same tastes! You did well with your Christmas presents and now it's too cold to garden, you can sit back and read them.

You did do well for books over Christmas and they all look very interesting. I like colours in the hat you are going to knit. It will be useful and warm in this proper January weather:)

Looks like a great selection of books Rowan -- they all look very interesting. I still haven't finished my Christmas book shopping, although, mine usually consists of craft and cookbooks -- I really should get back to some good literature!

Older books about the countryside are really interesting and far more informative than most new ones. They were written by people who gained the knowledge and research the hard way.
Well, look forward to a photo of you wearing the hat D.{:)

Wonderful list of books - I've read other books about Celia Thaxter and loved them.

The hat is lovely - should be a good winter time project. I'm knitting a shawl.

Thanks for the headsup on Laurie R King. I bought the short story and the first novel in the Mary Russell series just now for my new Kindle Fire. If I "take" to them, I'll have the happy prospect of ten more to read. That hat looks scrummy, especially in that green.

I love Quinton's illustrations. I have quite a few of his post cards of Flamborough and area.

Lots of lovely books for Christmas, they are going to keep you busy for a while. Such a strange winter this year; so mild and sunny but I'm definitely not complaining!

Like you I am ploughing through my Christmas books, mainly on gardening, but I still have a stash of pre-Christmas purchases to get through, hopefully before the gardening season starts again proper, then reading has to take a back seat.

Hi, think your reading list is something that I should aspire to - right now I read things that do not need a lot from me, just help me get off to sleep - maybe when my life gets back on track! I bought my first ever ball of noro wool at christmas and while I love their colours I was a little disappointed in the yarn - I bought a book that had a little about the company in it and they manufacture to look like handspun (something close to my heart) but on that level it left a little to be desired for me - but the colour was a wow factor! The hat looks great, hope you have fun.

Ahh, is there anything as wonderful as a love of reading?! Some great books here Rowan, I've 'snitched' a few and added them to my Amazon wishlist,ta. LOL

Your stack of books looks interesting, I've often wondered about the Mary Reilly books, maybe I'll try one. Never read Miss Pettigrew Lives For a Day, but I saw the movie and liked it a lot

One of of the things I love most as a gift - books! You received some wonderful ones. I might have to add a few of those to my ever-growing list of books to read. I'm enjoying the Maisie Dobbs series right now. They take place in England after WWI.

Good evening Rowan, what a delightful selection of books you have. Books are my all time favorite gift to receive. I had grand intentions of making it to Appledore last summer, however it just never worked transpired. This year, I do hope to get there, however, the top of my list belongs to The Tasha Tudor Museum. Greetings from Maine, Julie.

Great reads ahead Rowan. I like the look of One Family's Way - that should be interesting. Celia Thaxter's story should be wonderful - she entertained artists such as the amazing Childe Hassam and his beautiful painting from there are some of my favorites. Also grew an amazing garden of flowers way out there in the ocean! We often stood on shore on a clear day, looking out there toward the isles, but for some reason never got around to taking the boat trip - it's still on my list for when we're back in NH during a Summertime trip.

I didn't get a single book this year - always have to purchase my own! I'm planning a run to the used book shop soon - I'm running low on good reads and while still awaiting some snow with maybe some housebound days, I want to be ready to read when the time arrives. Of course I always read in bed before flipping off the light - just can't go to sleep without a few pages to end the day.

Love the header photo - is it of your home and garden?

I'm having real problems with Blogger at the moment, if no posts appear on here in the next week I may well move to another blog provider. This is partly a test to see whether I can comment on here as so far I can't seem to do much else apart from generating huge numbers of error messages!

Hi Rowan,
I hope you get your computer problems solved soon and in the mean time enjoy your books and knitting.

I went over to Wordpress, and I like it. I haven't had near the problems, and there is an option that allows you to import from your old blog. It's very intuitive and simple to use, and there are a lot of theme options.

Nice stash of books. I got my husband "Ask the Fellows who Cut the Hay" in a beautiful edition with illustrations by David Gentleman. He's been raving about it ever since. We've stayed often in the village in Suffolk where George Ewart Evans (who wrote it) lived and it's still pretty cut off, with a pub that is very good for folk singing.

One Family's War looks fascinating, as does the book on Celia Thaxter. All those years [busy ones!] of living in New England and we didn't made it to the Isles of Shoales--or a number of other places of interest.
A stack of books to be read is a very satisfying prospect in cold weather!

Winter has finally arrived here also! What a wonderful selections of more books for you! Sherlock Holmes' wife?! I must pursue those books! In fact, you have many here I would like to read! Thank you for sharing:) hugs, Leslie xx