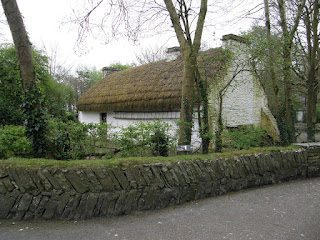 I arrived in Ireland a day ahead of my American friends and so once I had checked in to the Bunratty Castle hotel and had a spot of lunch I decided to spend the afternoon at Bunratty Castle and Folk Park. The cottages and houses in the Folk Park are replicas of buildings from the Shannon region (Clare, Limerick and North Kerry) and all represent Irish rural life as it was in the early 1900s. The small farmhouse above is from the coastal region of south west Clare and would have been lived in by a family who earned their living from both small scale farming and fishing. 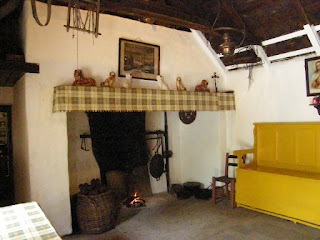 Although the family who lived here weren't well off they weren't poor either and had a reasonably comfortable lifestyle. The fire of course burns peat and all the cooking would have been done over it. 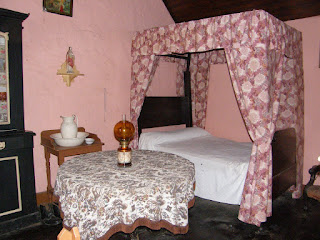 This is the parlour which also doubled up as a second bedroom. 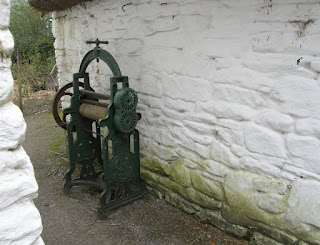 I love this old mangle, my gran had a slightly smaller version of this in her scullery when I was a child and it wasn't there as an ornament either. Putting heavy,wet sheets through the mangle was hard work. Actually I think this must be standing back to front as the wheel to turn the mangle would be on the right not the left. 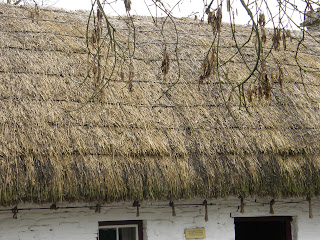 If you click and enlarge this photo you will see that the thatched roof is roped down to secure it against the roaring Atlantic gales that batter the west coast of Ireland in the winter. 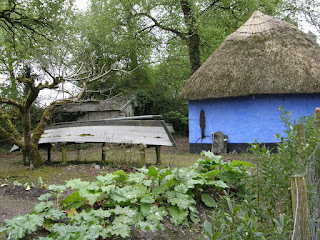 Isn't this cottage a gorgeous colour? It's a Cashen fisherman's cottage and was very sparsely furnished inside. The Cashen river flows into the Shannon Estuary and was one of the best salmon fishing rivers in Ireland. The fishermen from this area often had another string to their bow too - as smugglers! 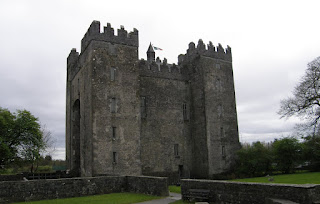 Now we come to the Castle itself. The first stone castle was built here in the mid 13th century but the castle we see today dates to the mid 1400s. Around 1820 the family who owned Bunratty Castle moved into Bunratty House which they had built in the grounds, the castle was never lived in again and it was left to become a ruin. In 1953 the now derelict castle was bought by Lord Gort who restored and furnished it in the style of the 17th century - the period when the castle was owned by the O'Briens, Earls of Thomond. 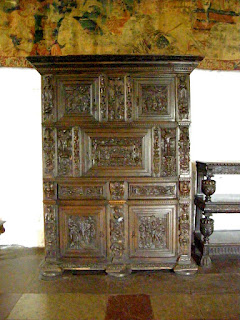 Most of my interior photos are poor as no flash photography was allowed and the rooms were either rather dark or had bright sunshine pouring in. I'm just including a few that are the best of a bad lot. Above is a lovely carved oak dower cupboard which was made around 1570 and stands in the Great Hall. 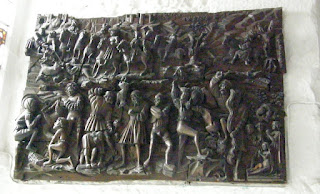 This was also in the Great Hall and is definitely worth enlarging, it's a wonderful early 16th century French woodcarving. Actually it's two that have been put together, the top one depicts a hunting scene with lords and ladies on horseback,the lower part is thought to show the story of Abraham and Isaac. 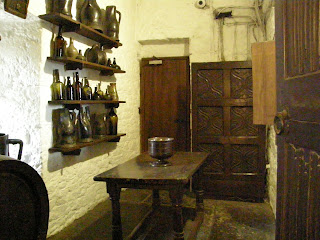 This is the Buttery - it has nothing whatever to do with butter though. The name comes from the wooden butts of beer and wine which were kept there. On the right is a hatch to the Great Hall and through here the wine and other drinks were served by the butler. Until recent times in all the great houses it was the butler who had charge of the wine cellars.
On the shelves is a collection of liquor jugs, drinking vessels and wine bottles. 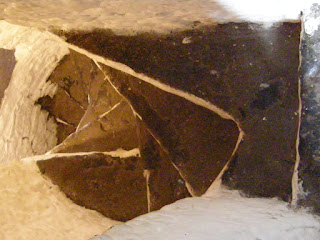 You will need to click and enlarge this to see properly how tortuous these spiral stone stairs are - it's the one set of steps I didn't venture onto:) They lead down into the dungeon - a pit about 15 feet deep that prisoners were thrown into. If they were lucky they got out again by being hauled up on a rope. I gather it isn't especially salubrious down there even now so in days gone by I imagine a good many prisoners died of disease or from the cold. 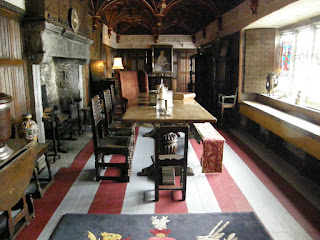 This is the South Solar preserved as it was when Lord and Lady Gort lived here in the 1950s. The limestone fireplace on the left is original - though original in what way I can't discover. It may mean original to the 15th century when Bunratty Castle was built or original to the 17th century improvements made by the 4th Earl. 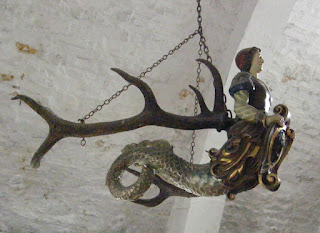 Isn't this chandelier fabulous? There were several in various rooms all slightly different. 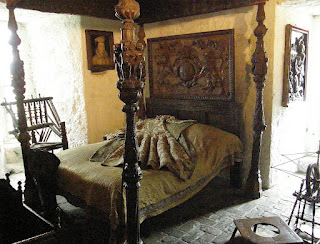 As with many of the rooms there was only a narrow entrance that was gated so it wasn't possible to get great angles for photos. This is the Earl's Bedchamber and the bed is quite something - a 15th century English piece with really ornate carving on the headboard and bedposts 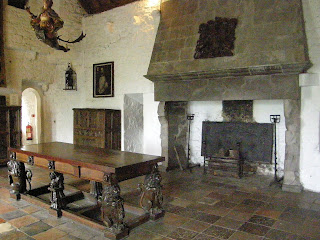 Here we have the North Solar and taking pride of place in the centre is the Armada Table. Legend has it that this table was salvaged from a ship of the Spanish Armada which sunk off the coast of Clare in 1588 by the High Sheriff of Clare who presented it to his brother-in-law Conor O'Brien. 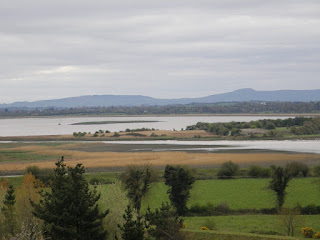 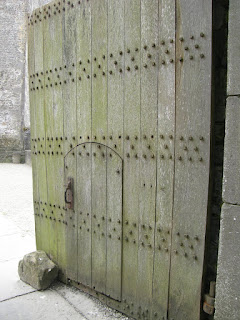 The gate into the courtyard of the castle - I don't know whether this is original or not but I really like it. There's a lot more of the Folk Park to see but I think this is enough for now:)
Posted by Rowan at Tuesday, April 17, 2012

Never having been to Ireland I really found your post interesting. I think I would have been much more at home in one of the small cottages, rather than the castle.
It looks like you had good weather.
♥

Another amazing field trip, thank you Rowan. I enlarged each and every photo and took in every detail. Who knew a thatched roof needed to be tied down, being a island gal and knowing what a southerly breeze can do, I do understand. Such wonderful furnishings, my favorite is the chandelier. I do hope spring has found you, greetings from Maine, Julie.

It all looks very interesting. I don't like coming down spiral staircases - maybe because i'm left handed and it just feels so wrong!

Rowan...this is just lovely! Thank you for the tour! Ireland is also my land of origin on my mother's side, and I am so looking forward to the day I can take my little grandson there. I think Bunratty will be on our itinerary!
Great photos, and yes, I remember the old mangle my granny had! Have a wonderful time on your trip.

Wow! The village, castle and scenery all look fantastic. What a stunning place. Can't wait to hear more about your visit.
PS I think the snooker starts on Saturday. They have a big marquee in Tudor Square and you can wander in and out of it. They are usually interviewing players etc. That should be there next week. xxxx

Hi Rowan! This is one place we went on our Archaeology Field Trip back in 1997. I can't remember much of the castle, apart from the Armada Table, and the fact that they often hired out the hall for "feasting"! The Folk Park was amazing - the smell of burning peat stayed with me for days. I was especially interested in these little cottages as my husband's folk on the Isle of Man would have lived in very similar dwellings.

Hello Rowan,
Found you over at Jacqueline ..cabin and cottage.
I liked your post on Ireland and the castle.
very interesting.
Also the little cottage is adorable.
Seeing the mangle brought back memories of my childhood, I had an Ama..mrs Allen, as my mother worked.. i remember helping her put her wahsing through the mangle.
very nice post
hope to see you my side of the sea.
best wishes
val

So much to take in, Rowan, in this wonderful post that I think I'll have to read it again. I love the cottages both inside and out and the contrast between them and the castle. I love the photo of the Earl's bedchamber, the buttery and the north solar in the castle. What an amazing place to visit:)

Wonderful pictures. It looks like you had a marvelous time !!!

If only you could have heard all the oooh's and aaaa's during that post. Lovely, tku for sharing.

I love the thatched roof, fisherman's cottage and the beautiful door at the end of the post.
I have an old mangle identical to the one you show on my patio. It has been passed down through the family.

I love these folk museums to see how 'real' people lived and not just the gentry. I didn't realise that about the Buttery - very interesting post - obviously well worth the visit.

Your pictures are wonderful Rowan! I've never been to Ireland, but always wanted to go. Thanks for the tour!

There's no greater romance than touring old castles! Your photos turned out well I think!

Went to Ireland back in the 90's but didn't visit Bunratty and it looks like a place I would have loved. Always enjoy seeing places where "real" people have lived.

I do like a castle and it would be a dream to stay in one. Your photos are excellent and give us such a lovely insight into your stay.

Looks like a great place to visit, Rowan, and I'm a bit of a sucker for castles, even though I know that in their heyday they would have been pretty uncomfortable. There are many delightful things in your photos, but I think my favourite thing is that beautiful blue colour of the Cashen fisherman's cottage and the 16th century French wood carving.

Oh, my gosh, those steps into the dungeon look impossible. I can't imagine climbing up or down them!

Thank you for this lovely tour of your Ireland visit, via the great photos. I've never been, so found it very interesting. What a castle!

I was there in 1998 with my family (God it was soooooo long ago) and I enjoy so much your "reportage" can't wait for the follow up.

Hello Rowan
I have enjoyed catching up with your wonderful posts this morning.

I am so happy you found Back Porch Musings after Google "improved" things.

Oh Rowan, I am sooo envious! how many delicious things to see! I love it all. The cottages remind me of the ones we saw in Skye, there thatches were held down by huge stones roped together and hung around them. I am off to soak up part two now !