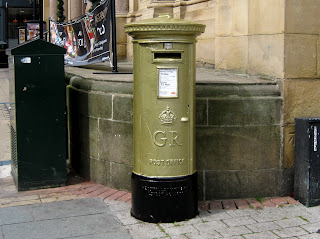 I really like Royal Mail's idea of celebrating our Olympic Gold Medal winners by painting a post box gold in their home town. I was in Sheffield this morning and took this photo of the post box near the City Hall painted gold in honour of Jessica Ennis's fantastic heptathlon win. She actually went to the same school as my children though a good many years after them. I think she is a brilliant ambassador for British sport, a thoroughly nice girl as well as hugely talented. Well done Jess!

Thank you for all the good wishes on my wedding anniversary:) Once the Olympics are over I shall be back posting again on a regular basis. At the moment in between watching all the events I'm trying to sort my garden out a bit as well as going to my daughter's house twice a day to feed George Cat while she suns herself in the South of France:) It's not like me to be glued to the television but it's great to see Team GB doing so well and the Games as a whole seem to be a resounding success. It's so good to have so much positive news instead of the daily doom and gloom that is usually in the media. Has anyone else ever noticed that as far as the media are concerned the news consists entirely of negative things? Yet how much better we all feel about ourselves and life in general when there is happy, upbeat reporting. I know a lot of dreadful things happen in the world but a lot of good things happen too and it would be good for everyone if we had a more balanced approach from the media. So here's to all the good things in life!
Posted by Rowan at Monday, August 06, 2012

Wow, love the post box, its a great idea. Really loved watching Jess on the tv, she really deserved her gold medal.

And hear hear to having more good news!

Hellow Rowan,
I so very much agree with you re the Media.. its always so negative , in fact , sometimes very depressing.
Its great to see team GB and watching the games.. I havent watched everything, as i have'nt had much time.
like you busy around the house and getting my new patio in shape.
your anniversary post was lovely.. gosh how time flies by.
best wishes.
have a good night
val xx

I agree that it makes a nice change for Britain to be doing so well - the games haven't been a disappointment - we have done ourselves proud.

Love the gold post box (brilliant idea). As for all the medals - I think these Olympics have been wonderful for our country and united everyone in a common cause. London has been brilliantly showcased and I think we will see tourism improve in the wake of this.

I hate negative reporting too - yet it's all the press seem to be able to do. Positive news is SO much better.

I didn't think I would be watching much Olympic sport, but I have been really gripped by it! I loved the opening ceremony too!
I quite agree about the 'feelgood' factor. It seems that the media does it's best to make people feel anxious or upset.

How long are they staying like that? I think there's one in MIlton Keynes and we'll be going there at the end of September.

Oh so true! And how fun that they're painting the postboxes gold -- that's wonderful!

Not sure how long they will remain gold - the best I've come up with is that they will be repainted red 'in due course'! I should think maybe until the end of the year but that's just a guess.

I am just so pleased that your London Olympics are such a great success, - sometimes to the chagrin of the negative media, and I love it when they have to admit that all their dire predictions were wrong and the people of the U.K. have responded so fabulously to all the events and excitement. Bravo to you all!!!
The gold mail boxes were a brilliant idea.....

What a tribute to the Olympic athletes, and I agree - more good news!!!!

Yes, very well done Jess.
I find that the worst offenders of doom and gloom are the BBC, driven mainly by their left wing approach to everything.

I'm thrilled the Brits have done so well in the games - and painting the post boxes is a wonderful idea. I saw one - the set in the wall type - in a Cornish village done the same way on another blog.

I'm posting now on South Africa. Was I close to where your family live when we flew in to Nelspruit/Mpumalanga airport? We were driven from there to Mala Mala - it was night and a very long drive, about 2 hours. SA was fabulous once again - even the Cape Hunting Dogs had come back to Mala Mala from Kruger - so now I've seen just everything wild in that beautiful land!

Stay well, your turn to be waited on soon I think!
Hugs - Mary

PS as far as the media is concerned, the newspapers have been a total joke. Full of opinions of a few jounolists - not real jousnalism xxxx

Isn't it refreshing to hear or read about the positives happening in the world, not just the negitives which the media seems to thrive on. The olympics were a breath of fresh air. God bless the Queen. Hope you are enjoying summer, sending greetings from Maine, Julie.