A Walk on the Moors 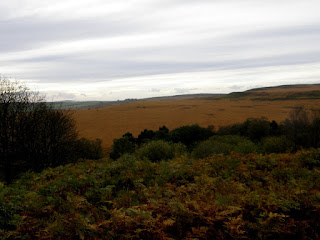 On a beautiful autumn afternoon my friend P and I took B Baggins and his friend Bertie up on Big Moor for a short walk. The colours on the moors at this time of the year are really beautiful - the bracken is a patchwork of greens and browns and the grasses have turned to gold. Moorland is a stark kind of landscape but each season brings its own beauty and autumn is my favourite - it starts in late August with the rich purple of the heather and then gains a wonderful golden glow which is accentuated in the sunlight of an October afternoon. 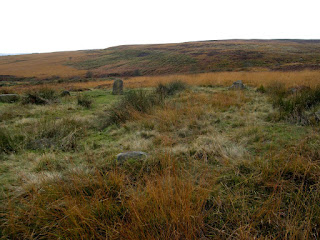 The moors around here are full of stone circles and burial cairns though if you are looking for a Stonehenge or Avebury you will be sadly disappointed. You will need to click on the photo to see the circle of stones surrounding a larger central stone. The circle dates back to the Bronze Age and is around 4000 years old. Quite close by are traces of pre-historic field systems and a Bronze Age settlement. I suspect that there is a lot more of each stone below ground as over the centuries the peat layers will have built up and the ground level will be a good deal higher now than it was in 2000BC. This is purely a personal opinion not based on any archaeological knowledge:) 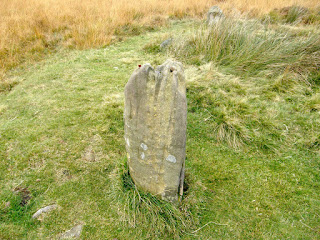 This is the centre stone and if you look carefully you will see that people still leave offerings here - mostly coins but there are other things too. 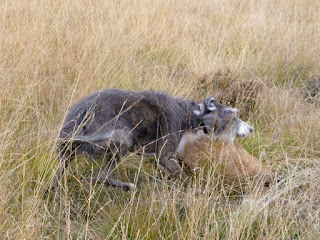 While P and I were looking at the stone circle other members of the party were having a good time too! This is mostly Bertie but B Baggins is in there too:) Can you spot him? 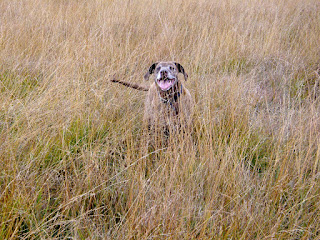 B Baggins is a bit more visible here, at this time of year it's often hard to spot him as he blends in with the colours of the fallen leaves and brown grasses. 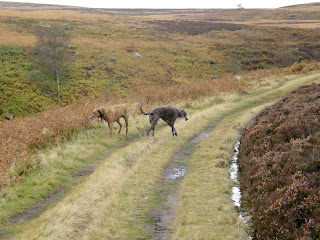 This is a proper path across the moor and as you can see it's pretty wet and muddy, it was a good deal worse than this in places too. Once you get onto the small tracks the open moorland can get very boggy indeed - peat bogs can be large and deep and dangerous. 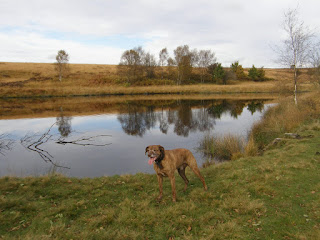 About half way along the path is this small reservoir, a stream connects it to a much larger reservoir further up - as this was only a short walk (about an hour and a half) we turned off just before reaching the second one. I love the reflection of the trees in the water here. 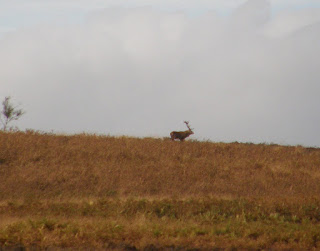 We could hear more than one stag roaring as we walked and eventually we spotted this handsome chap standing on the skyline - he was a long way off so even with an 18x zoom I couldn't do any better than this. 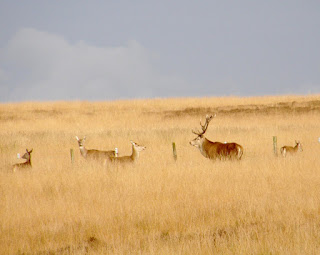 Further along we spotted another stag with several hinds, they weren't quite as far away but still too far for a decent photo. In different territory I'd have tried to get closer but it was so wet and boggy here that discretion seemed to be the better part of valour! Clicking on the last two photos will make them a bit clearer. 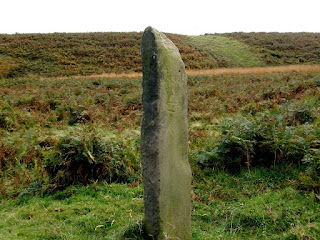 Just before we reached the road again we passed this guide stoop - these date back usually to the 1700s and were put there to help travellers to find their way over lonely and difficult terrain before the turnpike roads existed. These high moorland routes were used regularly by pedlars,jaggers,salters and tinkers. Jaggers were men who led teams of packhorses carrying all kinds of goods, the salters transported salt from the salt mines in Cheshire over wide areas of the north of England. Mostly the routes were used between May and October, during the winter months the harsh moorland conditions made the journey extremely dangerous. Many lives were lost when travellers lost their way in snowstorms or in the thick mists which can descend suddenly out of nowhere. No mists or snowstorms yesterday though so we made ir safely home again:)
Posted by Rowan at Saturday, October 20, 2012

Hi Rowan,what a nice walk you had and very interesting.We have a stone cirle at the top of the hill where we live altho like yours you have to look for it.Lovely pics of the stags they are such beautiful animals.Love Jill xx

Mr. Baggins does blend in rather well with the vegetation. If I had such a nice place to walk, I'd walk much more than I do now, which is not at all -- lol!

Thank you fpr a lovely walk.I have always wanted to see standing stones, one day perhaps.

I enjoyed this post very much Rowan,
Your posts are always so informative.
I enjoyed walking over the moors with you.
I learnt something today about the travelers over the moors .
Beautiful photos of the stags Rowan.
On looking more in depth at your photos.. one can make out the outline of the circle..
thank you for the trip
happy sunday
val

I really enjoyed this post, Rowan, especially those photos of the stag. I, too, love walking the moors, especially in the fall. We don't have anything comparable in the U.S.

Have to agree, lovely photos yet again. Glad to read that your son's recovery is going well :)

Great pictures, love stone circles of any size, had never heard of jaggers before.

We drove across yesterday Rowan and the colours look stunning on the moor. Your photos are lovely as ever.

Gorgeous moorland pictures Rowan I could have done with a bit of a blow through on a walk like that myself.

What a wonderful walk. It looks as if B. Baggins and his friend Bertie are having a super time, I love your photos of the deer and the guide stoop:)

What breath-takingly beautiful scenery. The rich, rusty, soulful palette of autumn is my favourite of all the seasons, and one I strive to enjoy as many walks (and drives) through this time of year as possible, too.


Sending sweet thanks your way for the lovely recent blog comments, and hoping very much that your son is doing positively on the health front.

What a great place to walk. We also took a walk in the woods this Sunday. The colors of autumn are just so beautiful that you want to go out and enjoy them. How lucky to spot the stags!

Dagi is getting sickly old unfortunately. He could pass away any time of old age. It seems to heighten our love of him as we know he is with us for such a short time yet. I tell him all the time how much I love him and how it is breaking my heart to see him fight to stay with us. He is such a sweetheart!
What is the life expectancy for B Biggins?

Hi Rowan!
Beautiful Moorland photos and I felt like I was there. Autumn is such a beautiful time of year.
~Clara

Do you have to worry that the dogs will veer off into dangerous territory?
I so loved the photos.

To walk the Moors with you and Mr. B Baggins would be a dream come true. Thank you for such a beautiful post. Greetings from Maine, Julie.

What a lovely walk - the offerings at the stones were interesting - oh how I would love to walk along these paths and see the ancient history. The photos are fabulous!!!

Your photos and commentary help me to better imagine a moor--most of my impressions of such a landscape are based on Daphne DuMaurier's 'Jamaica Inn.'

I missed this post before, but i like it very much. I love moors, they are so subtle, unlike more "in your face" type landscapes. Your animal pictures are beautiful, I specially like the bottom one of the deer but the dogs are having such a great time too!