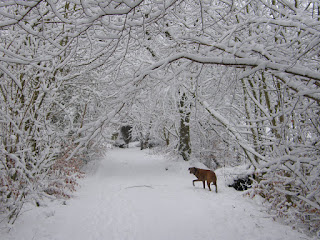 We finally had some proper snow overnight on Sunday so I took my camera with me when B Baggins and I went out this morning. He seemed to be determined to appear in as many of the photos as he could, this one was supposed to be just the path by the river. 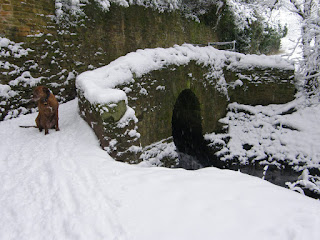 Here he is again! This little 18th century bridge crosses Needham's Dike just above the point where it joins Oldhay Brook. In the past there was a corn mill nearby and later a scythe works. 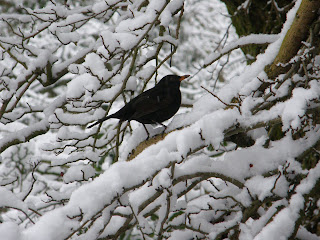 A handsome blackbird posed very nicely for me - I hope he found some breakfast, these are hard conditions for birds. 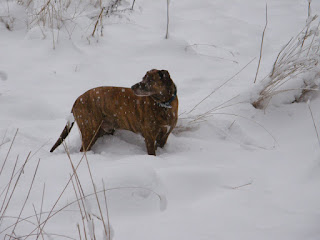 This shows how deep the snow was in Dam Field, B Baggins has not got a case of canine measles! It was snowing quite hard while we were out. As you can probably guess this was originally the site of the dam for the corn mill. 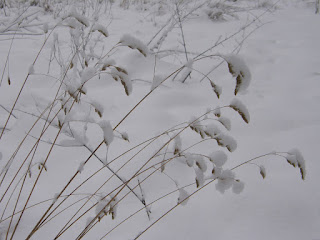 I really like this photo of the dead grass stems covered in snow, they look so graceful and ethereal.It looks better if you click and enlarge it. 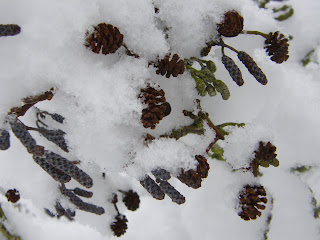 I'm rather taken with this photo as well, last year's alder cones and the new catkins just waiting for the warmth of Spring. It doesn't really show up in the photo but there is a real purplish tinge to the catkins. 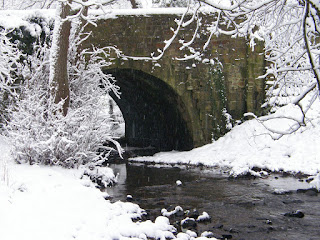 You can see this better if you enlarge it too, it's the late 18th century road bridge leading from Totley to Dore and the river forms the parish boundary. There was a ford here before the bridge was built. 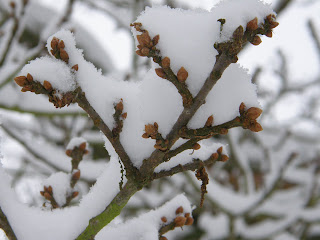 The warm brown of leaf buds on the oak tress in the field were surprisingly obvious. There is a line of them crossing the field which mark the edge of the old dam.

Over the stile and into the lane, this is the road carried by the bridge in the earlier photo. 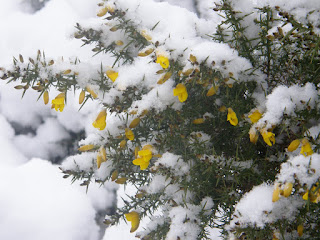 A lovely splash of colour where the gorse is still flowering in spite of the cold and snow. 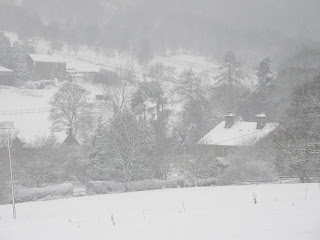 This is what my DH terms an 'atmospheric' photo and will definitely need enlarging:) It was actually very misty and also still snowing but I like the cosiness of the farmhouse tucked into the hollow and further up the hill is Hollin House which will take some getting out of today as it's at the bottom of a steep winding drive leading off an equally steep winding lane on the other side of the hill. I've known the people who live there for well over 30 years as their daughter and my elder son were in the same class at primary school and were good friends. That's today's snowy walk, I suspect that by tomorrow it will be much less pristine unless we get another dollop tonight.
Posted by Rowan at Monday, January 21, 2013

I am in heaven - these photos are absolutely fabulous. Oh how I long to travel to your country and see the beautiful sites.

I was wondering - might I print a copy of the photo of the bridge in snow? Just for my own use - I want to hang it on a specific wall that just begs for this kind of photo. I will be glad to pay for the rights to print it - one time only printing.

I love the snow on the gorse and the other branches. In the Western U.S. we have an invasion of the gorse - called Scotch Broom here - it covers entire hillsides and valleys and plains and fields. Farmers have to pay huge amounts to have it pulled out - it covers everything in a matter of a few summers. The story is that the Scottish people brought the seeds with them when they immigrated here - and it got loose and went crazy, no natural enemies. I love the looks of it on the hillsides - whole hillsides of sunshine - but I don't have to battle it for my livelihood.

Another invasion we have here is the Himalayan Berry - a gigantic, wonderfully sweet blackberry. Luther Burbank - our famous botanist and horticulturist (developed more than 800 strains and varieties of plants in his lifetime), brought the berries over from the Himalayas to cross them with the small wild blackberries of our west coast. They escaped, were spread by birds and now they are a plague. They will cover an unoccupied building and bring it down in two or three seasons - the vines have been known to grow up through foundations of occupied houses and into closets and across the floor before you can notice it. But oh the berries - they are in fields and along roadsides and free for the picking - make the most delicious jams and pies - we pick gallons every year. The berry vines have to be mowed with giant mowing attachments on tractors just to try and keep them in check a little bit - but I do adore the berries.

Hello JoAnn, you are very welcome to print a copy of the photo. I don't get uptight about people using them as I don't think anyone is going to make a fortune selling them:)

Lovely snowy scenes Rowan. We have actually got some snow here at the seaside! We don't see THAT very often!
I had to smile at your 'gorse' picture . . .

When whins [gorse] are out of bloom, Kissing's out of fashion. ‥Whins are never out of bloom.
[1846 M. A. Denham Proverbs relating to Seasons, &c. 12]

Absolutely gorgeous! What I wouldn't give to be 'up there', Rowan.

Thanks for having us tag along, your walk has really brightened my spirits :)

There is so much interest and history along your snowy walk. I love the old bridges. What stories they could tell.

Bilbo Baggins must have enjoyed the snow. More than the hungry birds.......

delightful sharing of your winter wonderlands.....

We had a couple of inches of fresh snow overnight :)

Dear Rowan,
I like the poem below your header.. perfect choice for this post.
Your photos are stunning of the area there near you.. fresh snow.
B.Baggins was enjoying himself for sure.
It does look really pretty. Your neighbours house and the scene..looks like the old fashioned christmas card image.
wishing you a good week
Thank you for leaving your kind comments..
Yes.. i thought I might wake up on some road..):

I copped the one of the bridge in the snow for my wallpaper program. I do so enjoy my "virtual" walks through the landscape of my blog friends. I personally do not object to Mr. B. Baggins intruding into your photos. I think he is rather a handsome fellow. I also copped the one of the grass with its load of snow. I think I might commit some poetry on it at some point. If I post it on my blog, I will attribute the photo to you and link it to your blog.

Hi Rowan,
Winter Wonderland indeed!! You live in such an amazing place. It is such fun to see your handsome B Baggins in the snow, my little hounds are not fond of the white stuff, a quick romp and back to the door for them:-) We have yet to have any real snow this year... I hope you get a fresh dollop!!
Thanks for the book suggestion!
Hugs,
Bella

Totley to Dore..... Totley Tunnel was the longest in the world when it was built and was the longest railway tunnel in the UK for a very long time! I have NO idea why I know that.

Very pretty pictures, but I still hate going out in it.

I am in desperation using an internet cafe now to keep in touch. BLISS!

Love your snowy scenes - you took some lovely photos. Tam said there was about 6" on the ground and she had to walk to work yesterday.

We are surrounded by green grass at home, but the hills about us have a covering of snow.

I have developed such a fondness for taking photos in this the snow this winter - much more so than in years past. I think it's the location here in British Columbia now. Rolling hills, frozen (or at least icy cold) lakes, snow dusted sagebrush, it's all rather picturesque and a very far cry from the slush splattered streets of Toronto (where we spent the last six winters before this one).

I think BB is just trying to be helpful D. He is just providing 'Scale' to the photographs.{:))

Lovely, lovely photos! Mr Baggins stands out well in the snow. I love the purple catkins and your photo of the 18th century bridge:)

Brrr! Cold and beautiful, particularly like the photo of the bridge.

Thank you for leaving your comment on my blog - I'm now following you too!

I love England but have only visited three times and it was Summer. Derbyshire I loved and then again Lavenham in Suffolk and the Cotswolds are wonderful too.....
Oh to be in England!!!!
I could very easily live a vilage life there quite happily!

Mr Bilbo Baggins loves his walk, nose down searching for new scents of who/what has travelled before him!!

I'll be back to see some more soon too.
Shane ♥

Really beautiful and gentle photographs. My favourite being the blackbird. O and I love the lane.....sure I love them all.......X

Stunning photos Rowan - You are very brave venturing out, though I suppose BB doesn't give you much option. xxxx

Your photographs are beautiful! I always try to have my camera with me when out walking but I find that wearing thick gloves on snowy days a bit of a hinderance.

Such loveliness! Your photos are wonderful! And we need B Baggins for scale! What wonderful environs you live in!

Lovely photos, Rowan. I'm especially fond of the one of the snow-covered road receding into the distance.

Some fantastic photographs here. The atmospheric one is exactly that - I took some of Peterborough in the mist which I also rather liked. Have really enjoyed some proper snow over the last month or so - but won't mind the warmer weather I will get from next week.