I had some ironing to do this afternoon and I decided to watch a DVD that I bought a couple of years ago - just a short film based on the Luttrell Psalter. It shows scenes of everyday medieval village life through the four seasons of the year based on the beautiful illuminated illustrations from this wonderful medieval manuscript. 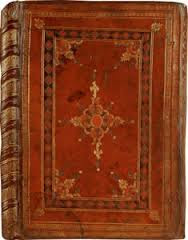 A Psalter is a book of the 150 Psalms from the Bible preceded by a calendar of the church's feast days and followed by various types of prayers.The Luttrell Psalter was commissioned by Sir Geoffrey Luttrell, lord of the manor of Irnham in Lincolnshire, sometime between 1320 and 1340. The original is now in the British Library.

This shows a man harrowing the field after the seeds have been sown and he's followed by a chap with a sling that he's using to stone the crows who have their eye on a nice tasty meal!

Here we have two women hard at work one spinning using what looks to me like a walking wheel and the other carding the fleeces ready for spinning.

Not all the illustrations are serious - these two chaps are having a bit of a set to after a spot of heavy drinking I suspect!

This is a trailer for the film which was made by a community group called WAG Screen who specialize in making films about Lincolnshire heritage and history. This clip is short but you can watch the whole thing on Youtube if you click here It's well worth it if you have 20 minutes to spare as it's visually very beautiful - it isn't a documentary, it simply brings scenes to life and you will recognize all the illustrations I've posted. I think I shall make a cup of coffee and go and watch it again:)
Posted by Rowan at Friday, August 30, 2013

Watched the trailer, and this evening I plan to watch the full video on Youtube, - thanks for sharing.

I was helping in our thrift shop the other day and came upon a DVD about Eardisland, Portrait of a Parish, produced by the Eardisland History Group in 2006 - I find this history fascinating.

I enjoyed both very much. How peaceful it all seems (apart from the chap being whacked - not sure what he had been up to!)

Beautiful little film, thanks for sharing it, will go to youtube and see the whole thing later, love things like this.

I love these illuminated illustrations they are so pretty and wonderful for their age. Will check out the video clip.
Patricia x