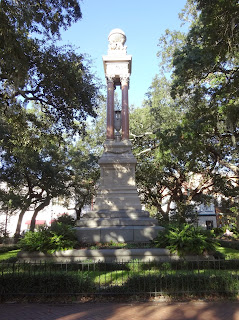 On our first day after a little wander round and a spot of lunch we decided the best thing to do would be to take the Historic Savannah Trolley Tour so that we could get an idea of what there was to see and the layout of the city. We got on at the Visitor's Centre and stayed on for the whole 90 minute tour which had a running commentary of what we were seeing and whetted our appetite to explore more thoroughly. Afterwards we decided to walk down towards the river passing through some of the squares on the way. Above is the Gordon Monument in Wright Square which is one of the four original squares in Savannah and dates from 1733. The public market was held here until it was relocated in 1763. 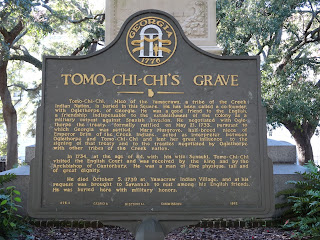 I think this was my favourite of all the squares and I certainly found it the most interesting largely because of its association with the Yamacraw Indian chief Tomo Chi Chi who was buried here in 1739 on the site which now lies beneath the Gordon Monument. Clicking on the photo to enlarge it will enable you to learn more about Tomo Chi Chi who was a much greater man than the one whose monument now covers his grave. 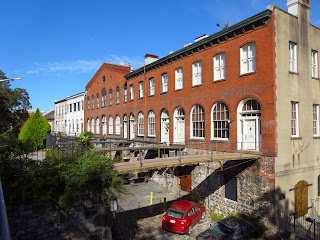 Factor's Walk stands between BayStreet and River Street on the Savannah River and is now home to all kinds of businesses from investment bankers to really tacky souvenir stores. It originates from the days when "cotton was king" and Savannah was one of the busiest ports in the US. The buildings are 5 or 6 storeys high, the upper part above the walkways served as offices to the cotton factors and the lower part served as warehouses. I think that the central elevation with the pediment was the original Cotton Exchange where the cotton factors set cotton prices worldwide. The decisions taken in this distant place affected the lives of many of my ancestors who worked in the cotton mills of Manchester in England. 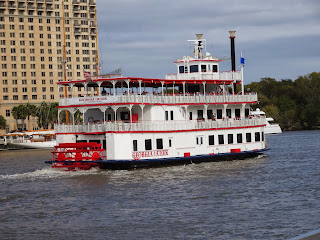 The Georgia Queen is one of the paddle boats that does cruises along the Savannah River though we didn't get round to doing this. The Savannah River forms a good portion of the border between the states of Georgia and South Carolina. 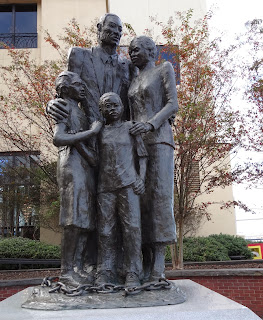 I really liked the African American Monument which stands on River Street. It's a poignant reminder of the slave trade upon which the wealth of the South and also the mill owners and slave traders of England was built. It depicts a family of slaves embracing after emancipation with the slave chains representing slavery still lying round their feet. There is a very touching inscription written by the poet Maya Angelou which reads:

" We were stolen, sold and bought together from the African continent. We got on the slave ships together. We lay back to belly in the holds of the slave ships in each others excrement and urine together, sometimes died together, and our lifeless bodies thrown overboard together. Today, we are standing up together, with faith and even some joy." 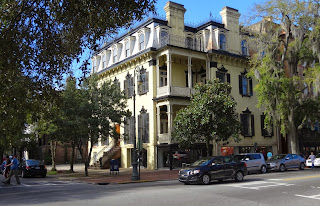 The following morning we were back on River Street to meet up with the lovely Janet of MacQue Blogspot and her husband Mac. We'd arranged to meet in Huey's for beignets and coffee and spent a very enjoyable couple of hours chatting with them. It was lovely to actually meet up with one of my transatlantic blogging friends. The afternoon was spent exploring more of Savannah's streets and squares. I wish I'd had the foresight to make a note of where this lovely house was but sadly I didn't! Judging from the photo before it it may be on or near York Street though. 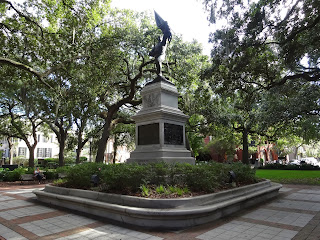 This is Madison Square where a rare statue honouring an enlisted soldier stands. Sergeant William Jasper was a Revolutionary hero from South Carolina who rallied the American soldiers after rescuing the American battle flag after it had been shot down during the Battle of Sullivan's Island in Charleston and they went on to defeat the British. 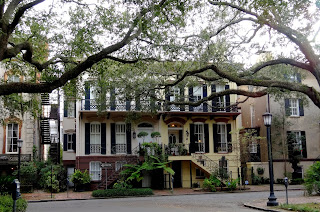 Savannah is filled with lovely old houses, again I've no idea where this is but I'd be happy to live in it! 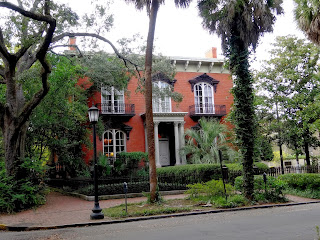 I do know where this is though! It's the Mercer-Williams house at 429 Bull Street overlooking Monterey Square. It was built by the grandfather of the famous songwriter Johnny Mercer who wrote so many wonderful songs including 'Moon River', 'Days of Wine and Roses' and the wonderfully named 'On the Atchison, Topeka and the Santa Fe' - which was a railway in case you're wondering. Here's Johnny Mercer's own version recorded in 1944. None of the Mercer family ever lived here, it fell into a state of disrepair and in 1969 was bought and restored by the Savannah preservationist Jim Williams. It became famous as a result of the book and film 'Midnight in the Garden of Good and Evil'. Not a story for the faint of heart! 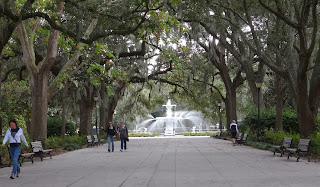 From Monterey Square we walked up to Forsyth Park where the first thing you see as you walk into the park under an avenue of trees dripping with Spanish Moss is the Forsyth Fountain. 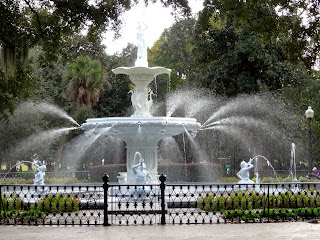 This beautiful cast iron fountain was installed in 1858 and is well worth standing and looking at. All the photographs will enlarge if you click on them by the way. 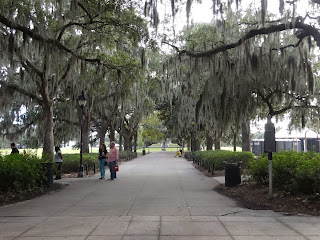 The park is a lovely place to walk and was obviously well used by the local people as well as by tourists. This photo really shows the Spanish Moss which is everywhere in Savannah. 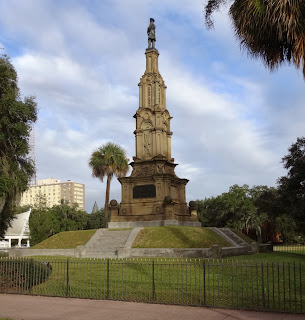 In the centre of the park stands the Confederate Monument - it was erected in 1874 to honour the confederate soldiers who died in the Civil War. It was made in Canada and transported to Savannah by sea so that it would never touch 'Yankee' soil and the Confederate soldier on top of the monument faces towards the enemy in the North. In the cornerstone lies a piece of the flag from Fort Sumter in South Carolina where the first shots of the Civil War were fired in 1861. It's estimated that 750,000 soldiers died in the American Civil War. 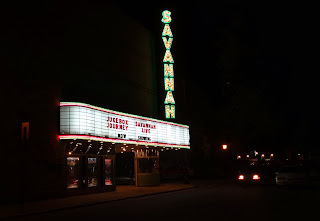 On the Wednesday our day ended with a visit to the historic Savannah Theatre on Bull Street/Chippewa Square. The theatre has been here in various guises since 1818 and is one of the United States' oldest continually operating theatres. We went to see 'Jukebox Journey' a live show with music from the 1940s through to the 1970s. It was very good but the audience was definitely on the elderly side, Juliette was the youngest by a country mile! It was actually her idea to go as Trip Advisor said we should:)
Posted by Rowan at Thursday, January 09, 2014

Glad you enjoyed this first day in Savannah. Along with Charleston, New Orleans, and San Francisco, Savannah is one of our most unique American cities.

It all looks simply stunning. And how nice to meet up with a transatlantic boggy friend x

Wow, your posts about trips always take me on a journey too! Some beautiful and poignant observations and as always, lovely photos!

Wow! This is looking to be a fantastic trip... and with fantastic connections for you. And you met up with Janet and Mac!!! Wow again! I'm loving your trip so far. xx

What a fantastic trip! I enjoyed seeing Savannah and how lovely to be able to meet up with a blogger friend too.

Those trolley tours can be so worthwhile. I must say I hadn't realised there was so much to see in Savannah - interesting post.

I notice that many of the old homes have the first story (American second floor) as the main floor, even though the ground (first)floor appears to be "fixed up." This is a common practice in the deep south, especially in areas that are prone to flooding either from rivers or hurricanes. Savanna being both coastal and on a large river, this makes sense. It's also cooler to put the main living floors up higher where the cooling breezes can get at them more easily. Savannah is a beautiful old city.

Looks like you had a great time with plenty to see. I look forward to the next installment!

We've visited Georgia, a few times and stayed with friends, but never been to Savannah. It's on our list, but now it's been moved to the TOP of that list. Great post Rowan.

A lovely tour - with wonderful photos. It is refreshing to see all the wonders of the city.

Love your pictures, always fun to see Savannah through other peoples eyes. Not surprised about the age of folks attending the show at the Lucas theatre.
Can't wait to hear the rest.

Isn't it just a beautiful city? I think it might be time for us to make a return visit.

Thank you for a virtual tour of Savannah. It looks a beautiful and interesting city. So green too.

Good evening Rowan, well I have never had the good fortune to visit Savannah, I must put this destination on my bucket list. I have so enjoyed reading this post, I would say luck was on your side...Greetings from Maine...