This royal throne of kings, this sceptr'd isle
This earth of majesty, this seat of Mars
This other Eden, demi-paradise
This fortress built by Nature for herself
Against infection and the hand of war,
This happy breed of men, this little world,
This precious stone set in a silver sea,
Which serves it in the office of a wall,
Or as a moat defensive to a house,
Against the envy of less happier lands;
This blessed plot, this earth, this realm, this England... 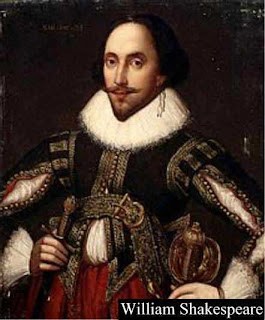 Today is also the 450th anniversary of Shakespeare's birth in 1564. So those of us who are English have two good reasons to celebrate - Happy St George's Day!
Posted by Rowan at Wednesday, April 23, 2014

A Happy St, George's Day to you. We're hoping to finally make it to the Globe Theatre when we're in London this summer. I think I told you that we had tickets to a play there once, but it was Sept.12, 2001 and we made it into London though we forgot our tickets. Mind definitely on other matters.

Happy St George's Day D.
I am amazed that we are still able/aloud to call ourselves English.{:))

Happy St George's day to you too Rowan. I put that same picture up in my Facebook page today too. I always think it's sad that this day is quite often overlooked and not celebrated as much as it could be.
Patricia x

A belated Happy St. George's Day, Rowan. I wonder how many years are left till I, too, become a St. George. My wife assures me that this is not in the cards.

My oldest son is George, and his birthday is just a few days earlier than St. George's Day--and my little great-grandddaughter is the day before; all good reasons to celebrate!