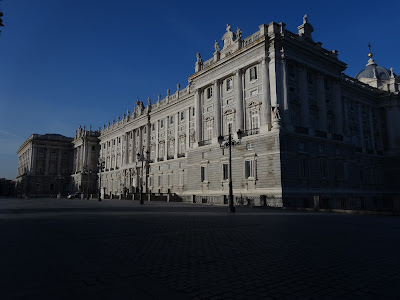 On Sunday morning we took the train back from Granada to Madrid arriving early in the afternoon. The rest of the day was spent eating, drinking and relaxing. Our flight home was late on Monday afternoon so we checked out of our hotel early but we were able to leave our luggage there until mid afternoon when a taxi would collect us and take us to the airport. We decided to walk up to Retiro Park again and spend some time exploring the areas we hadn't yet seen. The photograph of the Royal Palace was taken at 7.50am on our way to get breakfast. 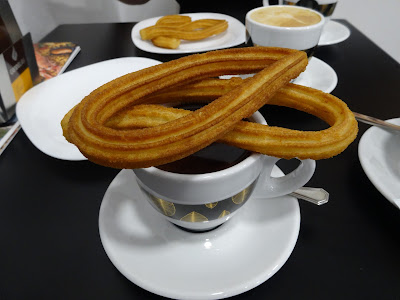 Chocolate and churros for the last time:) Just as well with all those calories! 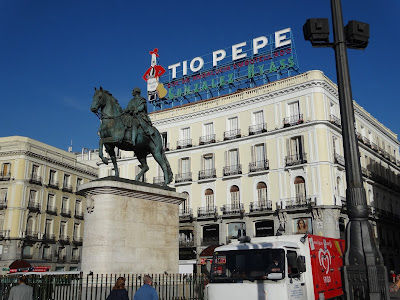 This is the Puerta del Sol - the very heart of Madrid. The Puerta del Sol means Gate of the Sun and it was where one of the gates in the city wall that surrounded Madrid in the 15th century stood. The statue of King Charles III and the Tio Pepe sign are famous landmarks. Charles III reigned from 1759 to 1788 and was generally a good egg who tried to do his best for his country. 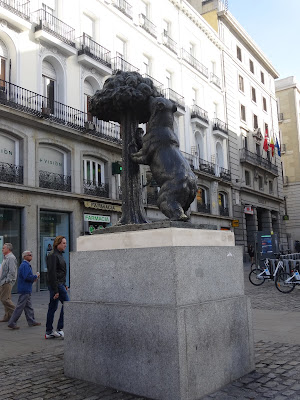 I love this bronze statue of the Bear and the Madrone Tree which have been the symbols of the city of Madrid since the 13th century. 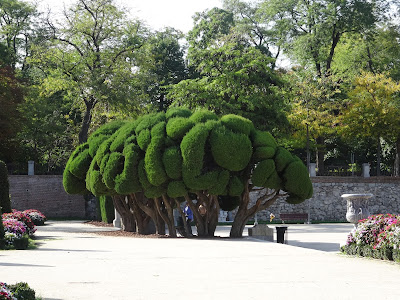 The sculptured shapes of these trees really appeals to me in this setting though I wouldn't want them in my garden. They need a lot of space around them to be seen at their best. 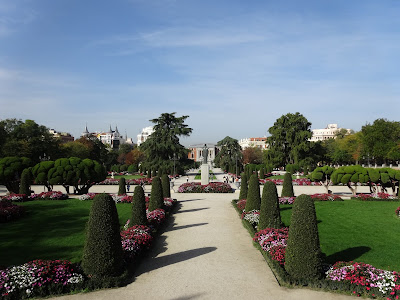 This is the formal part of the Retiro with lots of colourful bedding plants and specimen trees. The building in the centre right at the far end is the Prado Museum.The park covers about 320 acres and in the 17th century when a royal palace stood on the site only the Royal Family were allowed to use it.It was opened to the public in the 18th century. 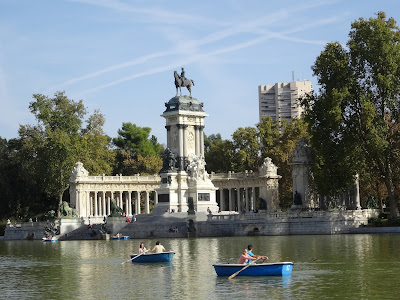 The boating lake is popular with both tourists and local people. The enormous Alfonso XII monument dates from 1922. 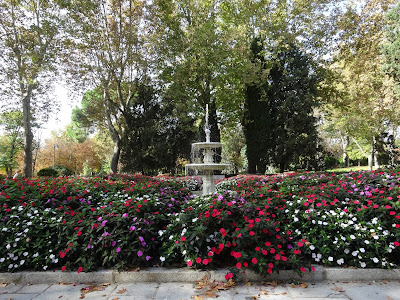 Retiro is filled with statues, monuments and many lovely fountains both large and small. 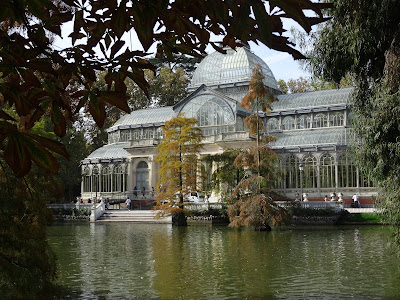 This is the Crystal Palace which stands by another lake in the Park. It was built in 1887 and was originally used to house exotic plants but these days it houses temporary exhibition. 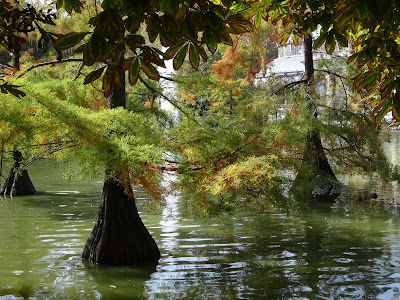 Aren't these trees fabulous? I wish I knew what they are. 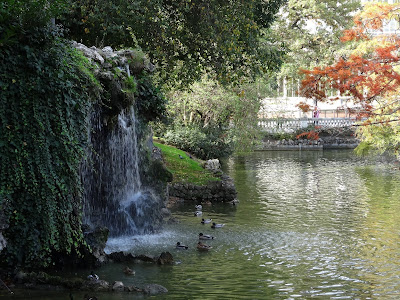 We walked all round the lake enjoying the autumn colours and the ducks, there were turtles sunning themselves as well. On the far side there was this little grotto and waterfall. 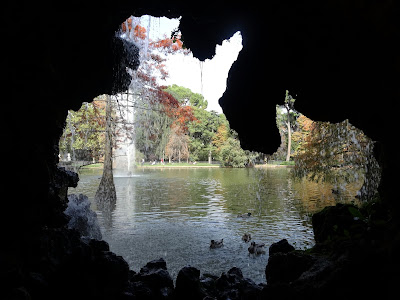 If you walk further round you can look out through the grotto and across the lake. 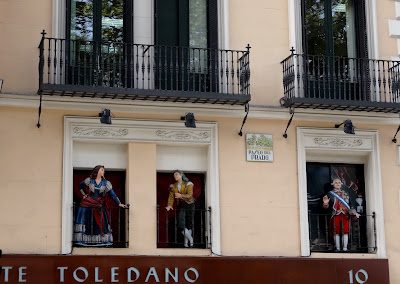 As we walked back through the Paseo del Prado we saw these figures in period costume leaning over the balconies gossiping and watching the crowds go by. Rather fun:) 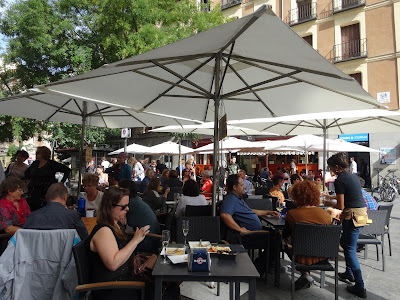 Back in the Plaza de San Miguel we had a late lunch at our favourite little eating place - The Secret Garden. We discovered it on our first day in Madrid, the food is excellent and it's right next to the Mercado San Miguel handy for last minute purchases of chocolates:) We really enjoyed our visit to Spain and I would love to go back again one day especially to Andalucia.
Posted by Rowan at Friday, July 03, 2015

Wow! That was quite a holiday you had. How marvellous.

Great photos of the park, looks like you had beautiful weather. I think your mystery trees are cypress trees.

Right. You've sold it to me. Another place I'd love to visit!

The mass of flowers around the Fountain is quite a beautiful sight D.

How beautiful! Your photos are exquisite, Rowan. I never thought Madrid would be like this.

Lovely to read and look at your photo's.
I love the lake and fountain.

Have a happy July

ALl the best Jan

It all looks so beautiful and sounds such a warm and relaxing holiday with beautiful buildings and good food:)

I don't know Spain at all, your recent postings have made me want to visit. Maybe one day!

Oh my! Churros look good. And I agree about those sculpted trees. They're wonderful - almost like children painted them!

Those trees you were wondering about are bald cypresses.

Many thanks to Janet and WOL for identifying my mystery trees:)