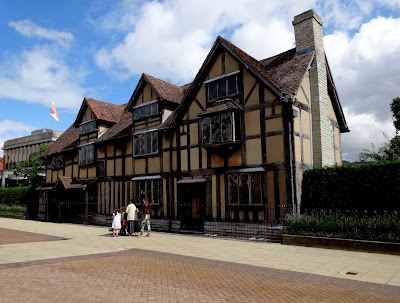 We had much better weather for our second visit to Stratford and arrived early which gave me chance to take a photograph of the house on Henley Street where William Shakespeare was born without hordes of tourists in front of it. Shakespeare lived here with his parents until he married Anne Hathaway at the age of 18 and the couple then spent the first five years of their married life here. 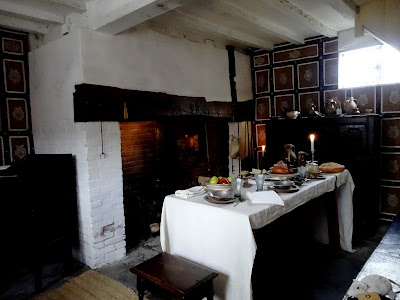 Taking photographs was really difficult as the house was absolutely packed so there was neither time nor space especially as the rooms were quite small to begin with. There didn't seem to be any individual guide books to the houses only one book which covered them all so I don't really know what this room is but I'm assuming it was the kitchen. 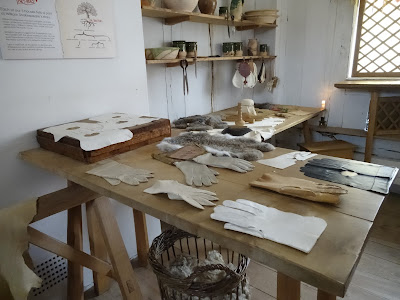 William's father, John Shakespeare, was a glover by trade and the house was also his workplace. I found this display of the glovers tools and the various styles of gloves really interesting. Notice the rabbit fur which was used to line gloves for cold winter weather. 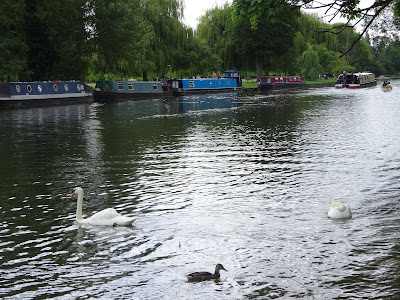 I'm afraid that we didn't stay very long in Shakespeare's Birthplace, it was so crowded that there wasn't a great deal of pleasure in it. Instead we decided to walk along the River Avon to Holy Trinity Church where Shakespeare was baptized, married and buried. The day was pleasant and warm and once we got about 200 yards along the riverbank there were very few people which is amazing since the part near the town centre was packed. 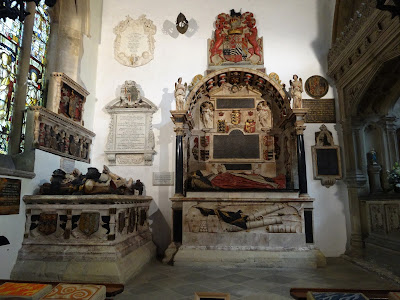 Holy Trinity is a very ancient church, there was a wooden Saxon church on this site as early as the 8th century. The Normans rebuilt the Saxon church in stone but the core of  the present building dates back to 1210 when the Norman church was rebuilt. Holy Trinity has other interesting features apart from Shakespeare's grave. The photo above is of the Clopton Chapel which is the finest Renaissance tomb in England, here lie Sir George Carew and his wife Joyce Clopton. Sir George was Master in Ordnance to King James I hence the canon on the lower part of the monument The Chapel is actually named after Sir Hugh Clopton a native of Stratford who became Lord Mayor of London in 1491/92. He wanted to be buried in what was then the Lady Chapel where he had built an ornate tomb for himself. Unfortunately he was in London when he died so was buried there and it is later members of the family who are buried in Holy Trinity. As with several of these photos you will see more detail if you click on them and enlarge them. 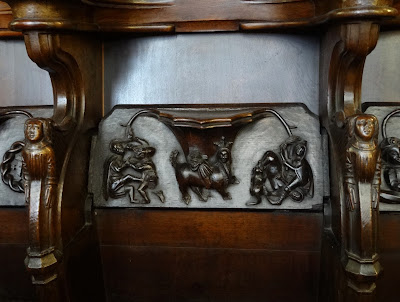 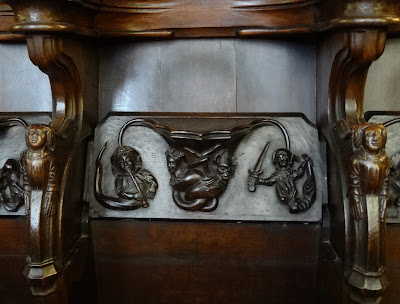 The church has a wonderful set of twenty eight 15th century misericords.  They show a variety of real and mythical animals and scenes from daily life which, judging from some of the carvings, must have been decidedly interesting! 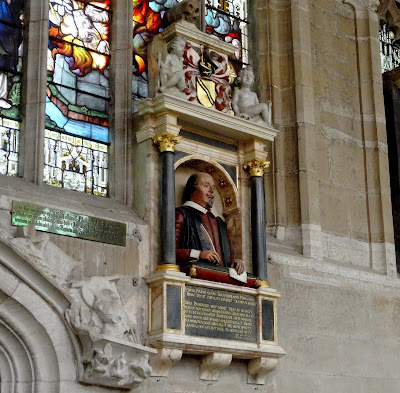 Shakespeare died on St George's Day - April 23rd - 1616. This funerary monument was erected on the north wall of the chancel within a few years of his death and is said to be a good likeness. 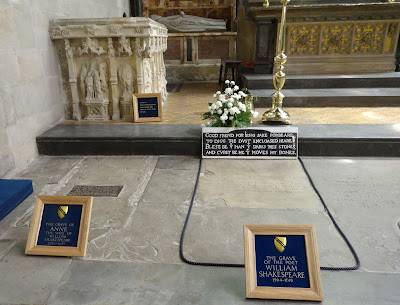 The graves of Shakespeare and his wife Anne lie side by side in the chancel of Holy Trinity. Following the dissolution of the monasteries by Henry VIII the tithe income privileges of the church were sold off. The duty of employing a priest and looking after the chancel went with the privileges. In 1605 Shakespeare purchased a share in these privileges for £440 . It was this, and not his ability as a poet and playwright, which gave him the right of burial in the chancel. The curse which is inscribed on the grave was to dissuade anyone from digging up his bones and putting them in the charnel house - a frequent occurence in earlier times although I'd be surprised if the bones of those buried in the chancel of the church itself would be disturbed. 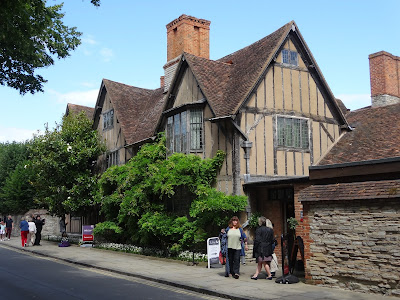 Very close to Holy Trinity stands Hall's Croft which was definitely our favourite of the houses we visited. It belonged to Dr John Hall who married Shakespeare's daughter Susanna in 1607. It's a really lovely house. Dr John Hall was a physician and was skilled in the use of herbs 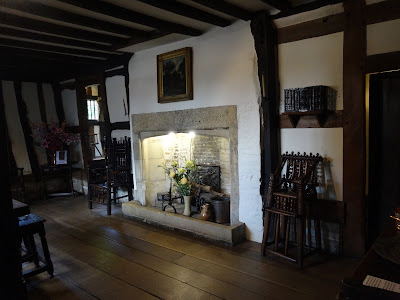 This was my favourite room in the house - the parlour. Notice the beautiful carved Elizabethan child's high chair on the right. 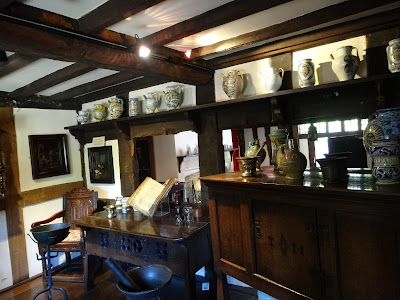 There's an interesting exhibition of the equipment used by an Elizabethan apothecary - the jars would have held various liquid preparations, dry ingredients, pills and lozenges and so on. Some of them are really attractive. 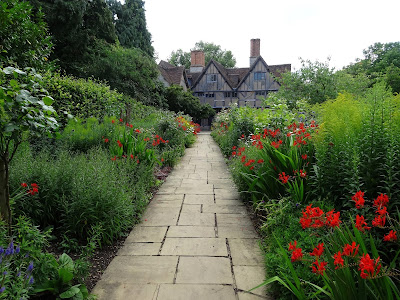 There's a lovely garden at the back of Hall's Croft which I suspect would once have been where Dr Hall grew the medicinal herbs for his practice. We were lucky in having the garden virtually to ourselves although several people came out just as we were leaving. There were surprisingly few people in both the house and garden especially compared with the crowds in the Birthplace on Henley St. 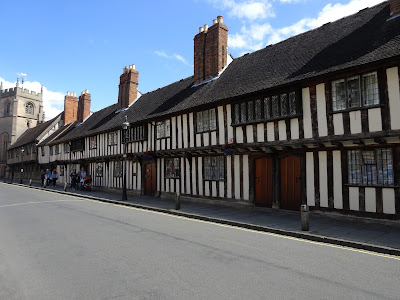 We passed these wonderful old almshouses on our way back to the town centre, The plaque in the photo below gives their history. 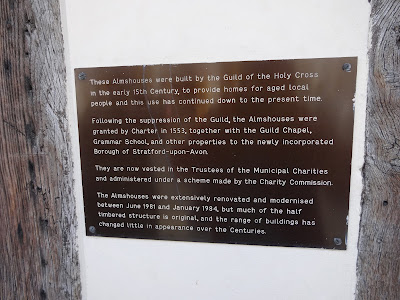 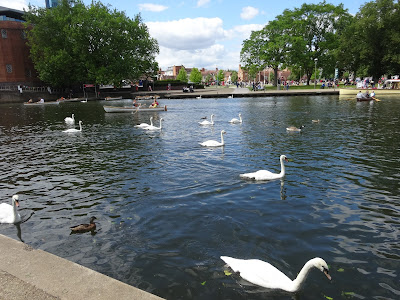 A quick visit to Marks and Spencer's provided us with a picnic lunch which we ate sitting in the sunshine by the river before setting off on the journey home.
Posted by Rowan at Friday, August 14, 2015

Another great tour of Stratford!

We have visited Stratford many times but have never visited the church, it looks wonderful.

A very interesting tour. I'm afraid I had rather too much Shakespeare at school and have never recovered from the surfeit.

The birthplace is always so busy isn't it? Last time we visited the town I ventured into the shop next door and could see into the gardens and it was so heaving. Hall's Croft was my favourite too and the church! The M&S is in what used to be The Red Lion Hotel, I remember staying there when we went to see Alan Howard as Henry V - many years ago:)

Lovely tour Rowan. I will now definitely focus on the church and Hall's Croft should I visit Stratford again - the last time I was a 17 year old convent school girl on the obligatory A level trip to experience a live performance of Romeo & Juliet. Memorable.

Thanks for this history lesson....