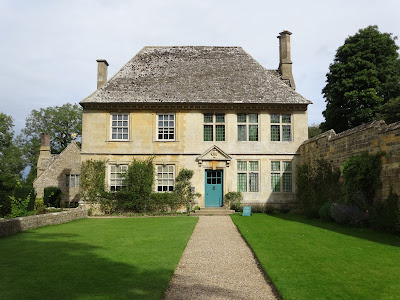 On the way home from our Time Travellers weekend we visited Snowshill which is definitely the most unusual National Trust property that I've ever been to. The house itself is a pleasant enough Tudor manor house but as soon as you step inside you are almost overwhelmed by the sight of the literally thousands of artefacts collected by a true English eccentric called Charles Padget Wade. 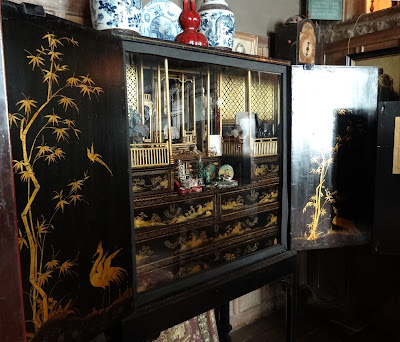 Photography is very difficult because of the very low light levels in the house. Until the National Trust took it over in 1951 there was no electricity in the house at all as Charles Wade preferred to use candles and oil lamps. The light levels are kept low so that the atmosphere is as it was during his ownership. In the photo above you can just about see the item that began Charles Wade's lifelong love of collecting - his grandmother's Cabinet of Curiosities. 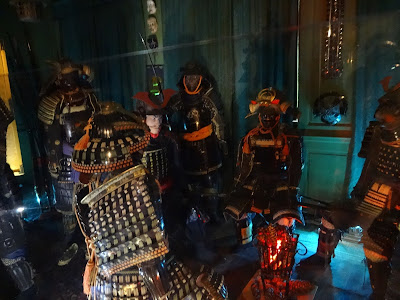 The collection of Japanese Samurai armour is amazing, Charles Wade acquired 26 suits of armour from various parts of England between 1940 and 1945. They date from the 17th to the 19th centuries and Charles arranged them to give the impression of a party of warriors sitting round their campfire in the gloom of the evening. All the armour is set behind a perspex screen which explains the slanting line across the top of the photo. I must confess that I'm intrigued to know how so much Samurai armour came to be in this country at all and especially in a plumber's shop in Cheltenham which is where two of them came from! 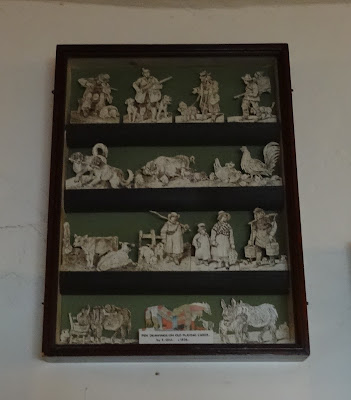 I really love these pen drawings on old playing cards. They were done c1826 by an elderly gentleman called Eric Gill.  I hope that you can enlarge them enough to see more detail because they really are brilliant. 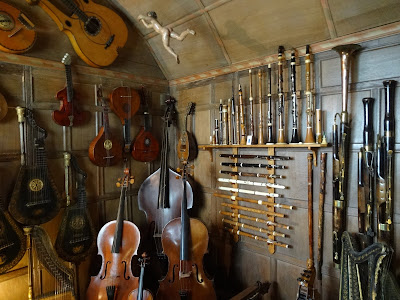 One of the rooms is devoted to all kinds of musical instruments, there is everything from Irish harps, clarinets and flutes to a 19th century coaching horn and three hurdy gurdys. 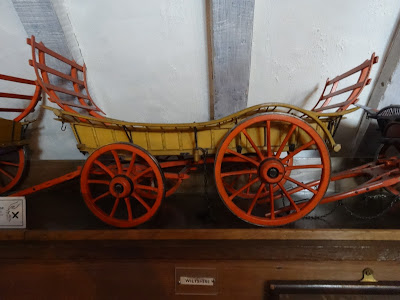 Of all the things we saw these were without doubt my favourite, they are a series of one eighth scale models of farm wagons from various areas of the country. This one is a Wiltshire wagon. They were commissioned by Charles Wade and were made by Mr H.R.Waiting between 1932 and 1938 from existing examples of the real thing. That's just a taste of what there is to see, I don't think I really liked it very much although I'm glad I've seen it. There was so much in every room that my senses were overwhelmed eventually. The garden on the other hand was exactly the kind of thing I like. 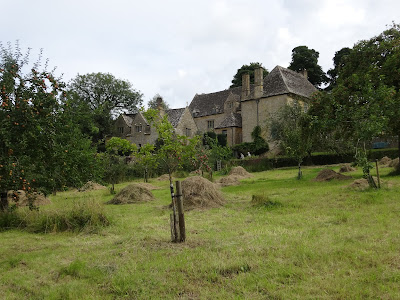 Walking up through the orchard the age of Snowshill is much more evident than it is from the classical style of the front of the house. The Manor of Snowshill (as opposed to the manor house which is a quite different thing) was owned by Winchcombe Abbey from 821AD until the dissolution of the monasteries in 1539. The manor house was built around 1500 and was altered and extended about 1600. By the time that Charles Wade bought it in 1919 it had become a semi derelict farm. Charles completely restored the house preserving as much of the old panelling and stonework as possible. He then set about filling it, the house was never intended to be lived in but was bought purely to house his collections. He lived in The Priest's House, a cottage near to the main house. 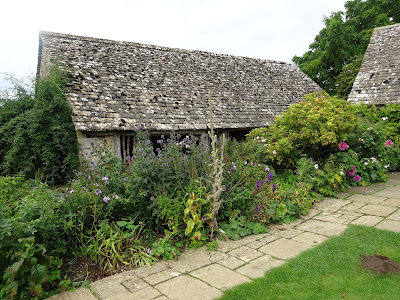 Not only was Charles Wade a keen - or perhaps obsessive would be a better word! - collector he also loved gardening. When he arrived the house was surrounded by nettles, brambles, broken crocks and all manner of other debris but once the house was restored Charles set to work outside. 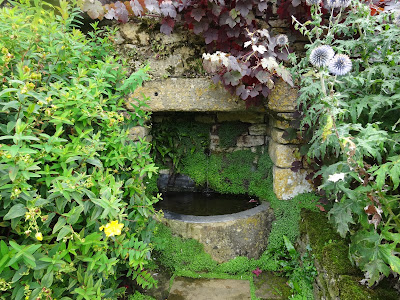 I really liked this water feature, it had a very tranquil feel to it. 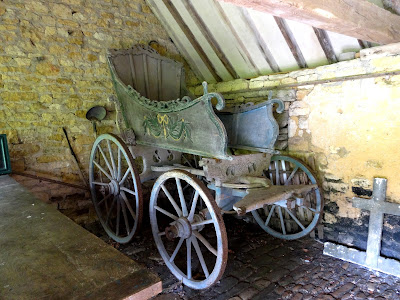 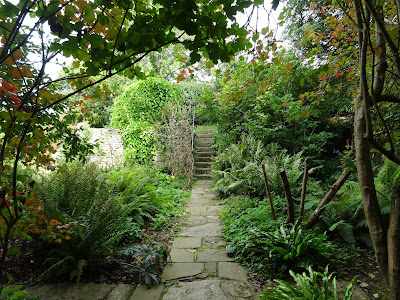 The garden was full of paths and steps and walls made of beautiful mellow Cotswold stone. It was a delight to wander round and I could have spent very much longer there if we'd had time. 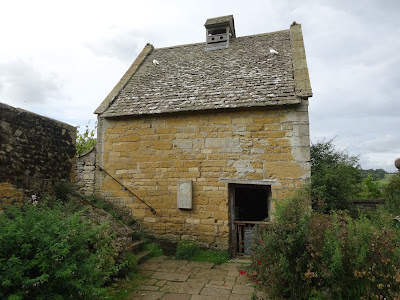 Although it isn't immediately obvious from the outside this is a medieval dovecote. As well as old farm wagons I'm also greatly attracted by dovecotes:) 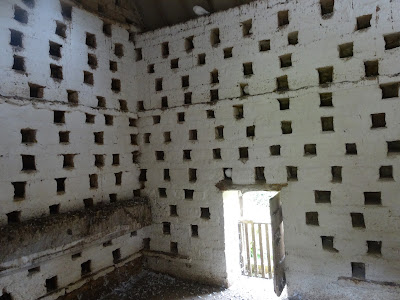 There are nestboxes for 380 birds inside, in medieval times doves and pigeons were an important food source especially in the winter months, they were kept for both their eggs and their meat. The little white blobs are a couple of the white pigeons that live there now. 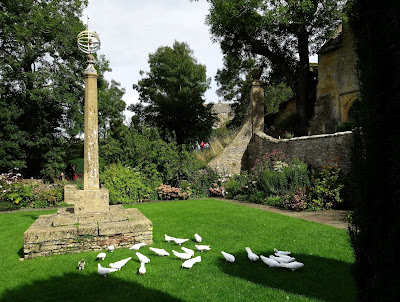 Here are more of the residents of the dovecote in the Armillary Court. The stone column is topped by a gilded sundial. 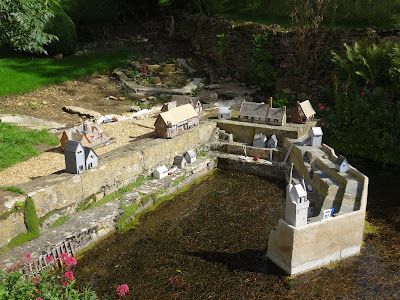 Another hidden delight in the garden is Wolf's Cove an imaginary model Cornish fishing village made by Charles Wade. It originally included a working model railway and canal. It seems to have more or less disappeared over the years but has now been excavated by archaeologists and is being restored by volunteers. Charles Wade was a skilled carpenter and model maker and delighted in projects such as Wolf's Cove. I would love to see it when the restoration is finished. 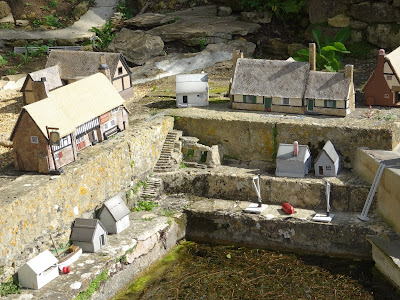 A close up of some of the model buildings - my favourite bit is the little set of stone steps leading down to the quay. 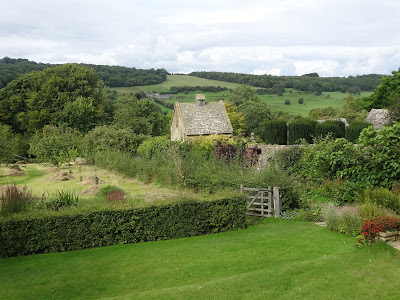 Finally a view from the garden looking down over the orchard and onto the countryside beyond. The stone building on the right is the dovecote. I would really love to go back to Snowshill one day just to spend more time exploring the garden and also to look around the village which I believe is very pretty. I'm off to Berlin for a few days on Thursday - my first ever visit to Germany so I'm looking forward to it.
Posted by Rowan at Sunday, October 04, 2015

I can remember being overwhelmed by the collections in the house and much preferring the gardens.

What a curious place. No wonder he liked gardening; he probably wanted to escape having to do the dusting!

I LOVE Snowshill. I remember those samurai suits in particular - they terrified me! But I was fascinated by the room names. Wade modeled the house on a ship and the rooms all have names like top mizzen (the name of a mast, I think) and the room by the central hearth was salamander, if I remember. Wonderful place.

That's somewhere I have wanted to go for a long time, but it's just a bit too far for a day out from here. Thank you for sharing. P.S. LOVED the garden too.

Looks quite a fascinating place, I think I would have found some of the collections a bit disturbing a bit like my reaction to the Pitt Rivers Museum. I love the expression Cabinet of Curiosities as it summons up so many thoughts and ideas. The gardens look wonderful. I love the Dovecote and the stone column and sundial also the model village which I'd love to see. Hope you enjoy your trip to Berlin:)

So many curiosities! I think Mr Wade had his feet in many worlds all at once! I am bursting to liberate the instruments in the music room! Very interesting collections, though i would be found in the garden, ( with a violin)! Thanks for sharing more adventures x

What a wonderful place to visit.
I love the house, full of curiosities. I doubt I would ever leave, I am fascinated by other peoples collections.
Beautiful old fashioned garden. The water feature is beautiful and like you, I love dovecots......works of art in their own right.

Another wonderful and beautiful site.

Wow, the owner certainly was a collector. I love the grounds. So beautiful and peaceful.

Glad to know that Snowshill has not changed much btu is also developing - the model village looks wonderful. A bit like Bekonscot - have you ever been? One of the most endearing model villages I know!
Enjoy Berlin. I visited a couple of months ago and wrote a post but it mightn't be relevant to you as it included doing stuff a 10 year old enjoyed.

I spent three years in what was then West Berlin in the 1970s. I'll be interested to see your pictures. Find out what happened to Tempelhof Airport, won't you? That's where I lived when I lived there.

Such an interesting place! Love England more and more each day and I can't wait to be back! If you'r in the mood for a bit of Italy instead....https://gracieplace.wordpress.com/

I just love the way that National Trust takes care of the old houses in Britain. I've never Heard of anything like that here. Interesting story you've told us.
Have a nice Wednesday.
Love Elzie

What an interesting place it must be - so much to see and discover! I love that model fishing village, I think I'll have to add this place to 'the list'!

Again another great place to visit. I love seeing people's individual collections. It's how some museums have started. like the Horniman Museum in SE London where I have just stopped working.

Ah, I'm being haunted by the Cotswolds! I've been to the village many times, and if it were possible, could easily live there. But I've never been to the Manor, though of course I know of it by reputation. And regret not visiting it when I did live nearby - so I've had great tinme looking through your pictures (again!)