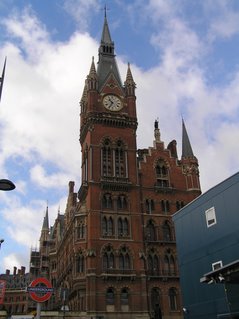 This is just a little of this and a little of that - hence the title of pot pourri.
I don't have long as it's the AGM of my WI tonight but I thought I'd put up something a touch more cheerful than the weekend post. My friend L and I went to London on Saturday on our annual visit to Country Living Christmas Fair. We've been going there together for years and always make a real day out of it - travelling 1st class and having breakfast on the train. I have to say that these are not the most flattering of photos of either of us but there you go. They are all that's available:) 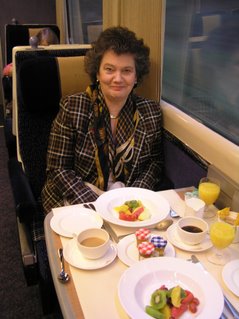 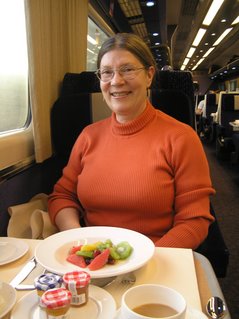 The picture at the top is of St Pancras Station which is a fantastic example of Victorian Gothic Architecture. Even though the interior is being moderniized the shell of the original station is retained as it is now a listed building. This is another view showing the Underground entrance and the steps leading up to what will be the main entrance to the station when the alterations are finished. At the moment it's a shambles and getting from St Pancras to King's Cross Underground- normally a couple of minutes - is now practically a five mile hike! 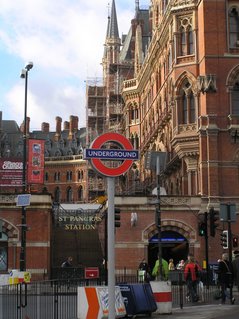 We only have to go one stop on the Underground to the Angel at Islington as the Christmas Fair is at the Business Design Centre. We had to queue to go in even though we already had tickets and while we waited I saw this wall of, I think, Russian vine which looked wonderful and slightly incongruous among all the hoardings and chimney pots. 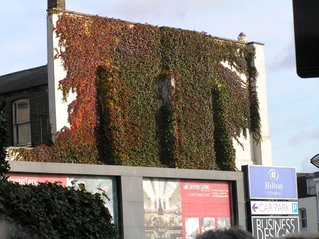 As I said, we've been going to the Fair for years but this is the first time I've ever noticed the lovely stained glass panel inside the entrance hall nor did I realise that it had originally been the site of The Royal Agricultural Hall where Crufts dog show and the Motor Show were originally held. 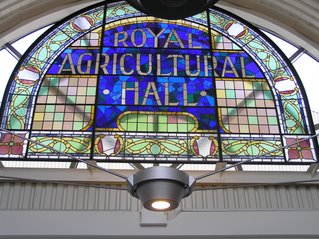 These are some of the things I couldn't resist buying, first is a cinnamon scented
decoration which is destined for the kitchen at Yule. 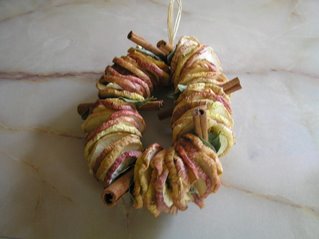 I bought three of these mugs, this one is for me and there are two with different but similar pictures on which will be presents for Matt and Jules. 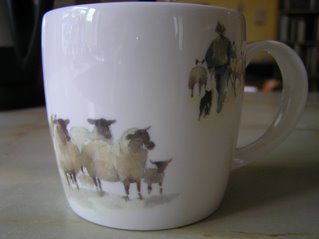 This is my new Christmas apron. 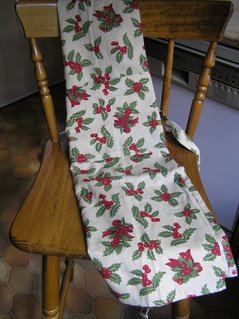 The throw was woven on the Isle of Mull in the natural colours of the fleeces and is destined for Neil and Cesca. 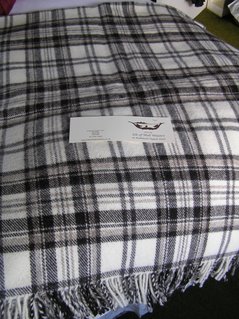 I love this pretty tealight holder 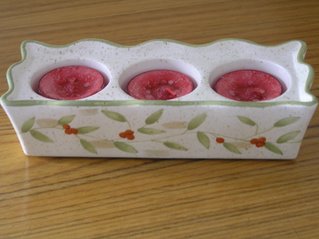 Last of all a cute little hat for Kaitlyn 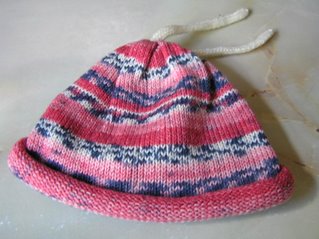 I'm back from my WI meeting and guess who is now on the committee? And playing Snow White in a sketch for next month's Christmas do? Hmm, I wonder how I get myself into these things? I'm really quite a loner and not at all the stuff of which committee members are made and yet somehow I'm now on three!
Posted by Rowan at Monday, November 13, 2006

Thanks for sharing your expedition with us! St. Pancras station is surely a lovely building!

Every year I think must go to the Country Living Fair this autumn, and every year I manage not to. I must be more organised next year looking at the itmes you bought, it could solve my Christmas shopping in one go.

It seems you and your friend had a very successful shopping day. I like all the things you've shown. And the building looks magnificent! Love the architecture.

How nice to see a little bit of London, I haven't been there for 14 years, I had to stop and think when I saw your photos. I love your purchases, it is an event I would enjoy I think, and I always love a train ride. Snow White hmmm...we need to hear more about this Rowan..!

I used to be Snow White, but I drifted! (Mae West)LOL!

Great post Rowan. I get the Country Living magazine - a wee bit of escapism for me!

I've always wanted to go the Country Living Fair - maybe one day. I love the way you did it in style and I love how you document your posts with photos of the places you visit.

This is all so wonderful! It seems that you found some great things for Christmas. And I might add that the photos of you and your friend are lovely. I would definitely like to hear more about your playing Snow white!
Have a wonderful day, My friend!

I am a WI member as well, so is my Mum in England. I'm hoping I can time my trip right next summer that I can go to one of her meetings. That would be a lot of fun, and interesting to report back on here in Canada!

The Country Living Fair sounds wonderful, and you made some great purchases. Nice treat, too, to travel first class!

Thanks for posting such lovely pictures. The stained glass is amazing, and I'm so glad to see such a beautiful Victoria building left standing. There was a lovely Victorian train station where I used to live in Milton Keynes, and they've torn it down. Such a shame.

I buy the British edition of Country Living every month and have been dreamin' of going to the Country Living Fair ever since I first learned of it! You lucky duck :)

(and you & your friend L look just wonderful on your way to the fair...I love that ya'll have made this trip into an annual event)

oh what wonderful things you found at the fair. Sounds like it was a delightful trip. The pictures are wonderful too.

Wow, you've been busy! I've always wanted to go to a Country Living fair, but never get the chance. I am hoping to be completely mad this weekend at a rather large christmas fair locally - I still have so many presents to get! The throw is gorgeous, is it by the Isle of Mull weavers? If so I've been to their workshop and spoken to the weavers (and their heilan' coos) ~ their work is magical.

You are right VP,The throw is by the Isle of Mull weavers - there were some fabulous things on their stand and I could have spent a very great deal of money. I just love the natural colours of the fleeces that are used. In fact I wish I'd bought another of those throws for myself now!:)

Rowan, could you send me your mailing addy for the stocking swap? thanks
happe2b50@yahoo.com

A lovely way to spend a day with a friend! I love the idea of ~*~*breakfast on the train~*~* watching the world go by!
I do love the throw I can see it wrapped around you keeping the chill away!I LOVE throws, wraps, shawls anything that keep me warm! :) P.S.
the stained glass is beautiful!

What a lovely, uplifting post. I enjoyed the pictures very much and felt a little like a stow-a-way. You bought really wonderful gifts and it's good you bought a couple for yourself as well. :) I thought the picture of you was very nice. You look like someone I would very much enjoy knowing!

What fun it would be to go to that Christmas show, dear friend! Love the throw and the mug. Congratulations on being in the skit! It will be fun, I`m sure :)

Thanks for the little glimps of London. It is my dream to travel across Canada by train one day.

Rowan,
Snow White hmmm. Does that mean that the attractive woman in photo 3 will let her hair down?
From the sound of your words, you had a delightful excursion with your friend. those are really restorative ventures, I find.

finally had a chance to stop back by and visit your blog. I love it! So enjoyed the photos and post about your trip. Have a great weekend and thanks again for joining the stocking swap.