Today the Mincemeat, Tomorrow the World! 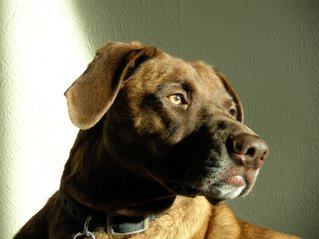 First of all we have a rather pensive looking Bilbo Baggins. 'When she says mincemeat, does she mean me?!' 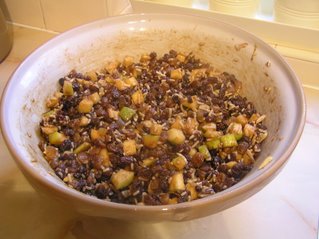 After a couple of weeks of muttering 'I must make the mincemeat' I have finally got it done. Above shows it after all the ingredients have been mixed together, then it stands all night for the flavours to combine followed by 3 hours in a very cool oven. It's left to go cold with regular stirring and finally 6 tablespoons of brandy go in and it is potted. This is the result. 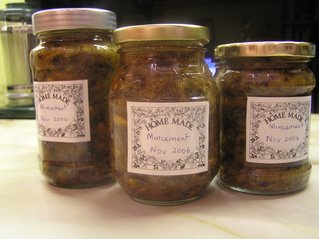 And here are the jars with their little Christmas hats on, a couple will be given as small gifts. 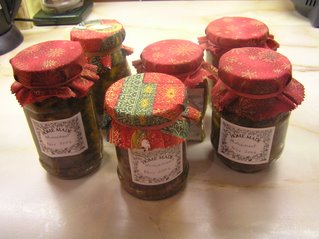 During the week I had a real surprise when I looked at my e-mails, there was one from Peter Sommer who produced and directed the TV series Tales From the Green Valley. He had discovered and read my posts about the weekend I spent at the farm where it was filmed and wrote to say he'd enjoyed reading it. To say I was flattered is putting it mildly! He asked if I would post a link to his own site where you can read more about the actual series.

Dec 1st
While messing about trying to get this link to work I've managed to lose half of this, defeating even 'recover post'. Will try and put back what I can remember in the morning. It's just been that kind of day:(

Sunday Dec 3rd and retrieval day as far as I can manage it. 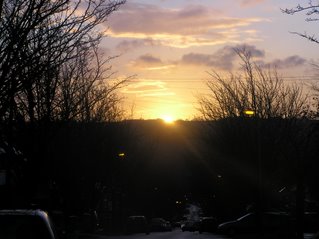 I was driving back fom the woods after walking Bilbo and turned the corner onto the top of the hill which leads down to my road. It was about 7.50am and the sun was just rising so I stopped and took this photo. The street lights were still on and it's quite a busy road at this time of day but, as the road faces due east and is quite a steep hill, the view of the sunrise is particularly good. 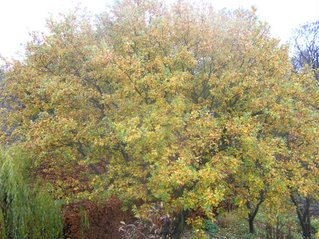 My oak tree taken from the bedroom window so that the canopy is more obvious - still full of leaves even at the end of November and now in it's beautiful autumn colours. 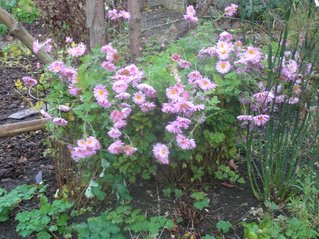 I've been meaning to introduce the 'Emperor of China' for a while, it's a hardy chrysanthemum which never flowers until late October/November and is usually battered flat by heavy rain and the wind largely because I usually forget to support it earlier in the year. This year it has been wonderful, I remembered the supports in time and the weather has been kind to it and even now it still looks pretty good. 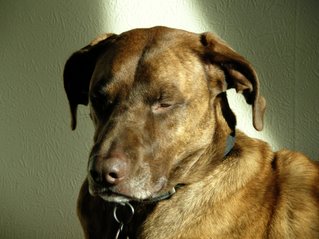 Oh,thank goodness,I can go back to sleep.She doesn't mean me after all!
Posted by Rowan at Saturday, November 25, 2006

Poor Bilbo does look quite concerned..!
It seems you had another every productive week Rowan, plus recognition for your writing. Well done!
I love the photo of the sunrise...from our bedroom window we can see the sunrise through the trees in the cemetary,(it makes an interesting picture) but only in the winter. In the summer the maple trees are so thick with leaves we can't see the actual sun until it is risen above them.

What a nice surprise! And for some reason the sentence under your link works as the link! I clicked on it and went right to the site. I'm going back to spend some time reading it.
The mincemeat looks delicious and you've potted it up so nicely.
As usual I enjoyed all your photos. I think Bilbo is just wonderful!

Those photos of Bilbo are wonderful! Such expressions! I've always found it interesting how some animals show expressions as people do! :-)
That is such a great compliment you were given on your blog! But I'm not surprised, Rowen. You write some very enchanting posts!

Rowan..I'm not sure what influence Janet has with the powers that be...! but I have to cut and paste..?

oh look...Bilbo seems like he is just about to tump over and snooze for a while :)

We don't have this mincemeat tradition here in Norway. I would love to make some one day.

Rowan,
It seems to me that you and I are alike in yet another way; and that is that we have our camera attached to our wrist permanently. I had mine attached after missing some spectacular shots in the past.
Girl, that is a wonderful tribute to your talent. Getting an e-mail from a television producer. Who knows where this may lead...A new career perhaps? Wouldn't that be great?
Bilbo is a comfortable companion and communicates with you quite well. Of course you have to be receptive to those communications. Animals don't share with just anyone.
rel

Love Bilbo having a nap there! What a great compliment to have the producer and director read your blog. I bet he comes back! I`ve never seen that show but have heard it`s good. I don`t think we get it here.

Almost forgot to mention that mincemeat looks rally good and so pretty in the jars. I love mincemeat pies.

Nothing like the flowers you posted in your blog is happening around here.
I'd guess we got about 6 or so inches of snow.

I love your labels Rowan. Where did you buy them, if you don't mind me asking? Wow, I'm completely flabbergasted that the Green Valley chap emailed you. I'm definitely visiting his site. I may even link ot it. Wonderful!

What a sweetie Bilbo is! The mincemeat looks good, that's the one thing that I don't make myself, but having seen a couple of people in Blogland make their own, I am a convert and will do so next year! I'm waiting to do my xmas puds, roll on the 1st!

I watched some of the 'Tales From the Green Valley' and thought it was really good - bless the Beeb!

Another lovely post Rowan. I'm impressed by the mincemeat - i'm eating Mr Kipling's - my pies can be used as missiles)

Oh my, Bilbo is adorable. I suspect she is actually just a wonderful, spoiled baby. I remember my dad used to love mincemeat pie. I never could get a taste for it. I think it's because I don't like raisins. What a chore to make it. Now I respect it more! LOL Ro, where you live is beautiful! It's a landscape painter's dream!

petesommer said...
This comment has been removed by a blog administrator.
9:59 am

Bilbo is the cutest~! Just came here from Janet's. Love all your pictures!

Your Bilbo is most handsome!My black beauty I posted is a girl!(1 of two)
My Natureboy *~LOVES~* mincemeat tarts at Christmas.. would be a true treat if it was homemade!WOW the director..good for you! Darn losing part of your post..I hate that so frustrating!

I thought you should know that you have been tagged...

Bilbo is so lovely!! and your jars of mincemeat with the printed labels are gorgeous. What wonderful gifts.

I imagine you will be surprised to see a comment on this post so long after it was written.
Actually the top comment shown as anon. was mine..! Amazing to think we have 'known' each other since 2006!
I wanted to say I thought I recalled you mentioning the Green Valley, as it has finally made it's way to Canadian TV. We have been enjoying it on Sunday evenings. Although we missed the first two half hour programs it has been lovely to see the rest. I think we have 4xhalf hours left.
I'm going to see if I can find the link you added..
Sheila