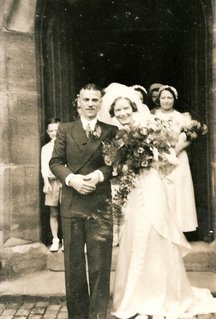 Recently I've enjoyed seeing old photos on other blogs and reading the stories attached to them. I have very few old photos of my own family which is a source of great regret to me as I'm a keen family historian. I gaze with envy on all the wonderful Victorian and Edwardian photos that other people have. The few older ones that I have all came to me via various cousins of varying degrees but I'll save those for another post. Clicking on the photos will make them clearer. The photograph above is of my parents on their wedding day - 31st July 1938. The bridesmaid is my dad's sister, Aunty Winnie - her full name was Winifred Victory - she was born on November 11th 1918, the day that WW1 ended hence her second name. On her 80th birthday she made the front page of the local paper because of this. The little boy peeping round on the left will be featuring again further down. 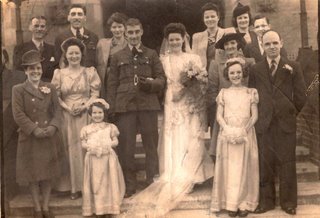 I love this photo because almost all my father's brothers and sisters as well as my gran and a couple of cousins are on it - a real rarity as far as I'm concerned. The bride is my Aunty Doreen marrying Uncle George who was in the Royal Canadian Air Force. My mum and dad are either side of the Canadian airman on the back row. Gran is next to the bride. It is 1945 and shortly afterwards Doreen was one of the war brides being shipped across to Canada.She was 18 years old and never saw her mother again. I met her and my five Canadian cousins for the first time in 1999 when I went to Canada to see them. When I came through the Arrivals gate at Dorval she knew me immediately - she said 'Oh it's just like our Bill walking towards me'! Aunty Doreen had never been back to the UK due originally to lack of money and more recently to fear of flying. The year after my visit though she finally conquered this and came home for a visit with two of my cousins after a gap of 55 years. It was quite a homecoming as you can probably imagine. She is still with us aged 81. 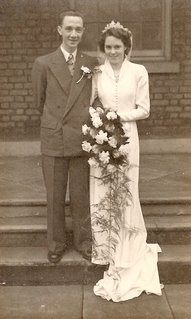 This is the little boy in the first photo quite a few years later - October 1952 to be precise. My dad's youngest sibling marrying my Aunty May, both still going strong at 75 and 71. 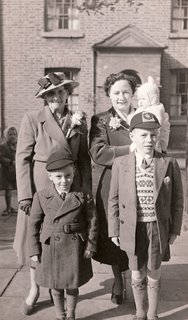 This is Uncle John's wedding again with my gran on the left and another of my dad's sisters,my Aunty May, carrying my cousin Sheila. At the front on the left is her son, my cousin Peter, and on the right my cousin Terry who is the son of yet another sister, my Aunty Lilian. I have an awful lot of cousins! Aunty May is another one still going strong at the age of 86. 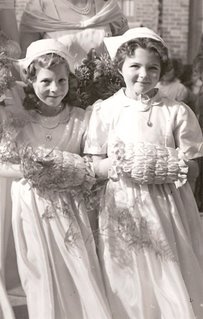 Finally we have the bridesmaids,on the left is yours truly aged 6 and on the right my cousin Glenys aged 7. My mum made our outfits, the dresses, the little Dutch bonnets and the muffs that we carried - all in pale pink. I still have the locket that I'm wearing, it was our present from Uncle John and Aunty May. Three days later I was in bed with chicken pox! My mum caught it from me and was really ill so Aunty May, the new bride, came back from her honeymoon and then spent nearly two weeks looking after me and my mum. Welcome to the real world Aunty May! She's always been my favourite aunt even though she isn't a blood relative, she's never got any older in my head either, I still think of John and May as a young couple. Must go over to Cheshire and see them soon.
Posted by Rowan at Sunday, January 28, 2007

Lovely photos Rowan.
You are so much like your mother, despite your aunt saying you looked like your dad!
You made a very sweet bridesmaid too.
Your Aunt May, looks stunning in that dress, so slender and elegant..and such a young bride.
I have to say it again..you are the image of your Mum..the resemblance is striking.

Rowan,
I must agree with with Sheila, you do resemble your mum.
I love the old photos and the history they can tell. I inherited the lot from my aunt Nellie. She was the youngest child in my paternal grandfather's family. She married but they never had children. She was really the only true grandmother I had. They lived in her homestead all her 78 years.
My mom's dad was a cabinet maker, but also during the depression years earned money as a professional photographer. my mom being the oldest of 5 was the recipient of his largess of photos.
They lived in Indiana. I never saw them after I was twelve.
rel
Sorry to be so "long winded."

I agree that you look very much like your mother.

I think you look remarkably similar to your mum, Rowan. All of the brides looks so beautiful. I have a great aunt who was a war bride, she is still going strong and lives in New England. She left the UK at the grand old age of seventeen! How brave they were!

These are fantastic photos! I love seeing the clothes and hats and such in old photos. And I agree with the others....you look like your mom.

It amazes me to look at the smiles in the wedding photos and as I attended a wedding this past weekend I saw these same smiles!The gowns on the brides were stunning!Lovely photos you shared.

but thanks for sharing yours :)

These are great Rowan! Such treasures, to have these photos.
You and Glenys are so beautiful, I love the fact that the clothes were homemade. My times have changed!
You do look like your mum....

Those pictures are so special ~ thanks for sharing them. It is delightful to see photos that usually one wouldn't be shown, and it's so lovely to be able to trace relatives and ancestors (something I myself have just got into).

I love picture and family stories of everyday people.

This was a lovely trip through your family history. It is wonderful that you have the photographs you do and that you can identify everyone in them.

Your mum was a skilled seamstress - your bridesmaid dresses were beautiful!

Last year, the mandolin orchestra I belonged to, played at the War Brides' conference here ... we played all of the songs from the war-time era. The brides are a very special group of people - Canadian treasures, I'd say!