A Touch of Spring 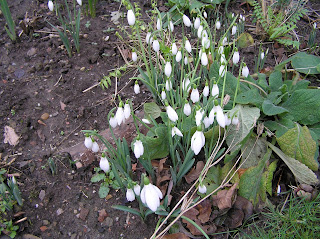 Yesterday was almost springlike with blue skies and sunshine, it was enough to tempt me outside for a while to do a little work in the garden. Not too much as I've learnt not to get too over enthusiastic after the winter, it pays to start with an hour or two and gradually work up to a full day out there. There are snowdrops all over, these are a small group in the front garden. 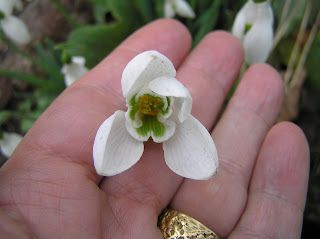 I turned one of the flowers up to photograph the inside, they are so pretty and yet this part isn't often noticed. 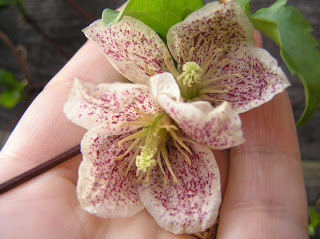 This is the inside of a winter flowering clematis - not mine unfortunately although I get the benefit of some of the flowers fom my neighbours plant which grows over and through the fence between us. 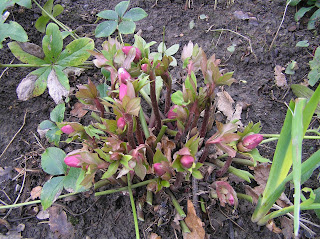 This is a group of helleborus orientalis already in bud, it's a rather special one that cost me an arm and a leg but the flowers are beautiful when they come out. The original plant was just a single flower stem but in the years it's been there it's increased steadily. 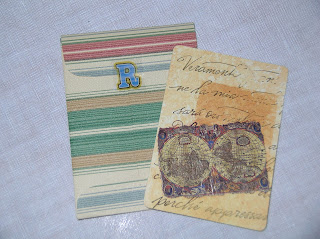 Among this morning's post was an unexpected letter from America, it contained this lovely ATC from Janet of Just bee-cause - and just for fun!! The photo doesn't do it justice as the colours are much stronger than they appear to be, I love the little handmade envelope with my initial on as much as the ATC. Thank you Janet, it was a lovely surprise to start my day. 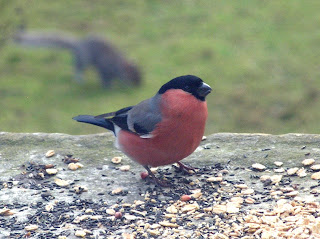 The last couple of photos were taken by my husband who has taken to spending large parts of his day lying flat on the dining room floor taking photographs of the birds in our garden - not to mention the grey squirrels and occasional visiting cats. The bird above is a bullfinch feeding from the pile of seeds that I cunningly place at the top of the terrace steps. They are becoming quite scarce in the UK now but we see a pair regularly especially when the plum tree comes into flower:) 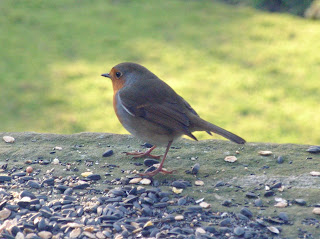 This is the robin - English version and much smaller than the American robin. This is the one that appears on all the Christmas cards. 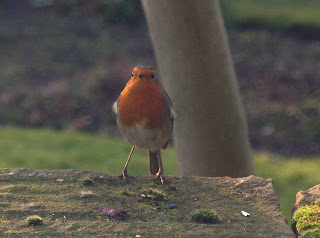 This shows his red breast better, I really need to play with them and enlarge,crop, sharpen etc but don't have time today. Clicking to enlarge the images might help. 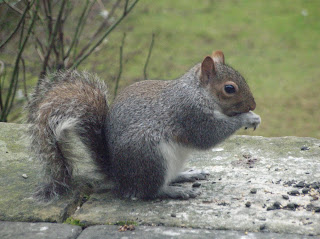 Finally, the ever present, unfortunately, grey squirrel. These are responsible for the near extinction of our beautiful,native red squirrel which is now found in only a few parts of the UK. The red squirrel is the one that Beatrix Potter wrote about in Squirrel Nutkin and is also the friend of Alison Uttley's Little Grey Rabbit.
The greys also kill young trees by debarking them and in the nesting season they steal both eggs and chicks from birds' nests. They are NOT my favourite form of wildlife, cute as they look!
Edited to say I've cleaned the photos up a bit now so hopefully they look better.

I love your English Robin! I guess it`s true that this side of the pond , everything is bigger. We too in Canada have the larger version. I have a dear friend who`s now moved back to her native Switzerland and I onced asked her what her first impression of Canada was....it`s nice to get a perspective from someone not from here. She said huge.....huge!
I`m jealous that spring seems to have sprung there!
Enjoyed seeing your old pictures too.

Your English robin is very charming!
We are having a light snow today...not too many signs of Spring yet!
how nice of janet to send you the ATC!

Rowan,
We're in the middle of a deep freeze and your out playing in your garden. ;-)
The photos of the birds (unfamiliar to us here) are terrific. And blooming flowers ..what a treat. I'm happy that you had an extra arm and leg so as to be able to purchase the helleborus orientalis.
We too used to have red squirrels around, but only grey now.
rel

Lucky you to have those lovely early blooms.
I have planted several hellebores in the years we have lived here, but they never survive the winter.
I love the small English robins, and always enjoy my english Christmas cards as they invariablty show them. We have very few grey squirrels in this area, we are inundated with the black ones.

Spring is just around the corner methinks - wonderful! Lovely pics.

We've got snow and cold (it's supposed to get to 0F in the next few days) -- hard to imagine that you, who are as far north, at least, have flowers.....

What beautiful flowers. I like the first one with the green center, and also the winter clematis. It's so interesting to be able to see the seasons change in other parts of the world.
The robin is so cute. I love watching birds.
So glad the little ATC arrived and that you like it.