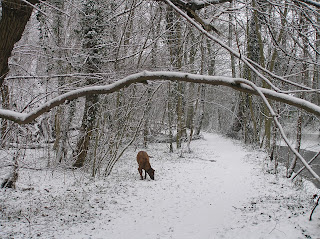 We had a little snow this morning and Bilbo Baggins thought it was wonderful - he loves playing in the snow as have all my dogs. This includes my old Scottie, MacIntosh,who usually had to be carried home because he had so many snowballs attached to his back legs that eventually he reached the point where he couldn't walk properly! Thawing him out when we got home took forever and resulted in large puddles of snow all over the kitchen floor. Bilbo has much longer legs so happily he doesn't have this problem. 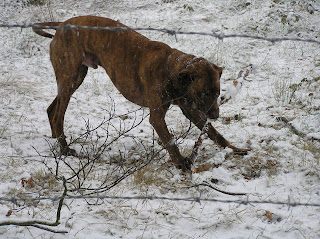 Me and my stick. 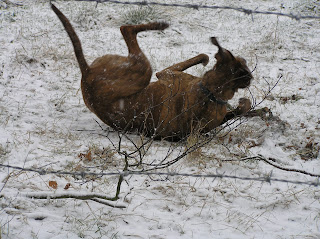 Life is such fun!


I do wonder,though, what kind of idiots run the British media. The headlines this morning were all about 'heavy falls of snow' 'battling to get to work' rush hour chaos' and so on. Now I do know that we had haven't had as much snow here as other parts of the country but even so - the projected accumulation of snow was - are you ready for this in Canada and the USA! - as much as 15 CENTIMETRES in places!! Well, heavens to Murgatroyd!! It is just pathetic really, I know that my friend in New England has at least 2 or 3 feet of snow most winters and other parts of the US and Canada have as much if not more. Many European countries are usually under several feet of snow for most of the winter months too. They must be laughing themselves silly when they see the hype on British TV and in the papers. As for battling to work through 3 inches of snow! I can remember several occasions in the 1960s when I walked the 3 miles to work from our village to the nearby town through a foot or so of snow, then at the end of the day I walked the 3 miles home again. There were lots of people doing the same thing and it was quite good fun really. We walked in small groups and chatted and laughed as we went. I can also remember a few occasions in the 1980s when it snowed and all the buses stopped running and my husband walked 8 miles home fom work. He staggered in finally looking like a dying duck, it had taken him nearly 3 hours because, as he got out of the city, the snow became quite deep and hard to walk through especially in black leather business shoes. It's a long time since we had snow like that. 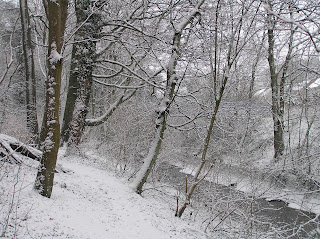 Lovely photos Rowan and it seems
Bilbo Baggins is having great fun...My daughter's dog used to enjoy it, but as she gets older she is not as keen.
I suppose snow falls and conditions are relative, we do have people here who forget from year to year how to drive in snow, and we get it every winter.
Your comment on the amount in Canada and the US was timely, check this link I have put here for snow in New York state at present..
Now I don't feel so bad..!

Wow...Bilbo is one happy dog. You are lucky to have only 15 cms...I agree, it can snow far worse in places. I guess the British aren't used to it though.
Great Photos!

Rowan,
You have just the right amount of snow to enjoy without it being a burden
I always had a dog while growing up, a cocker Spaniel, and oh how they love to play in the snow and with sticks!
Tomorrow we travel 3 hours south-west to the finger lakes region of NYS. They have 100 inches of snow. I hope to get some great photos.
rel

This is my second comment to you today so I'll post in now before it disappears into the blogster dump.

Bilbo Baggins is having fun in the snow no matter if the rest of the country is not! I heard all the news about the paralyzing snowfall over there and thought you must have several feet of snow! The media just loves to sensationalize everything.

The way things are going when this generation of kids have grown up schools will close, people will be late for work and the whole country will be in chaos because everyone has a covering of frost on their cars. Bob.

You got just enough snow for lovely photos!
We are frequently amazed that we can get around when we find out what the media says about our weather
The dogs make me smile :)

I know what you mean about the news coverage ~ where we used to live in the North-West of England, we were frequently enjoying heavy snowfalls and yet they weren't ever reported on the news (even when schools were shut and roads impassable). That's the media scare-mongering for you!

We've had barely more than a sprinking of snow, although we're supposed to have some tomorrow (great, one the one day I *do* want to go out!) though.

Enjoy your walks, Bilbo looks like he's having a wonderful time. G loves it too, soppy thing.

I know what you mean about the media's sensationalising of the snow - barely an inch and the whole country grinds to a halt - it seems we are never prepared! I can remember the "Great Snow" of 1962/63 when we had snow on the ground from Boxing Day until mid-March, and people just got on with life - they had to. I think it's so disruptive because it is generally so short-lived.

Having said all that, our part of Wales (Carmarthenshire) was badly hit by snow yesterday - about 6" fell during the day. We live half way up a very steep hill and it doesn't take much of a fall before it is difficult and then impossible to get out except on foot. Wales probably never got a mention in the main news, but there were more than 500 vehicles stranded on the A48 between Carmarthen and Cross Hands and people had to just abandon their vehicles. Parts of the M4 were gridlocked for a time too. That's our bit of excitement for the year - now it's starting to melt, we shall have the floods . . .

I so agree with you, I remember walking to school in the thick snow in the 62/63 winter, and the school did not close for even one day. It is all such a nonsence these days.
Lovely photos.