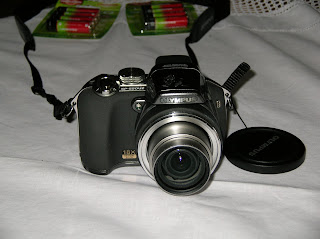 I've been waiting for this for a while and today it finally came - my lovely new camera. It has an 18x zoom and all kinds of fancy settings which I still have to get to grips with, on the technical front I am not a fast learner:) One of the settings is a night time one and another is specifically for sunsets so I have great hopes of these eventually. I've been playing with it a little so will just add some of my first efforts for you to see - hopefully there will be better and more interesting ones to come in the future. None are outdoors because it has been wet and windy all day. 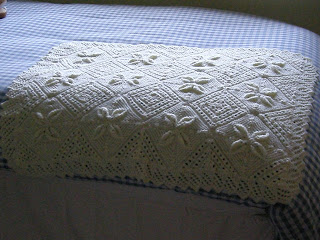 This is the blanket that I've just finished for Gabriel, some of you may feel that you've seen it before as indeed you have - it's the same one I made for Kaitlyn but in primrose instead of white. I've used the 'any light' setting for this. 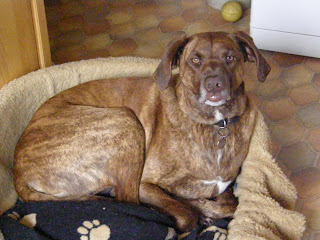 Mr B Baggins looking highly suspicious of my activities! His bedding looks a mess but every day after I have carefully laid it out all neat and comfy looking he equally carefully scrapes half of them into an untidy but obviously more satisfactory heap. 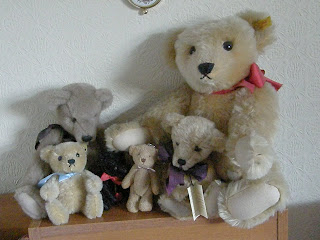 Some of my small friends, using the 'any light' setting again, I haven't mentioned my teddy bears before, I don't exactly collect them but sometimes one 'speaks' to me and I have to take him home with me. It's actually a few years since any additions have been made but that doesn't mean that there won't be the odd new one in the future!

The last picture was actually taken with my old camera which I've passed on to Neil and Cesca - Cesca took this one. Being a dad is obviously an exhausting business:):) 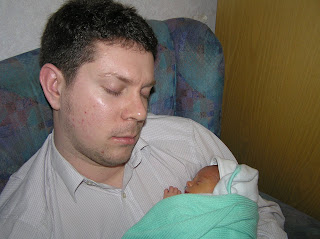 Oh, I'm truly jealous of you and your new camera! Mine is such a limited little thing and I really want a good camera but I'm such a dunce when it comes to technical stuff I'm afraid I won't be able to use one!!
The blanket is beautiful, and Bilbo Baggins looks mighty comfy in his bed but the best one is the daddy with the new baby....how sweet.

Nice!!!! THat camera better accompany you on your walks, we will expect all kinds of piccies now!!!!
BBaggins is a doll.
So is Gabriel, lovely blanket too Rowan.xo

The minute I saw the title of this post, I thought "I bet it's a camera!" :-) I am thinking of upgrading. I like my camera, but it is the "1" of the series and now they are on "8".... Reviews say the stabilizer is much better now.

Gabriel's blanket is lovely. I'm so glad he's doing well enough to be out and about.

What a great new toy! I'm sure you will have lots of fun with it! The baby blanket is beautiful, what a lovely pattern! Mr. B Baggins looks very comfy!
Kelli

Rowan,
Oh what a difference a digital camera makes in one's life. personnally, I think it makes us notice the world around us more. I'm sure you'll make good use of your new "toy" and I wait in anticipation of the stimuating photos to come.
That beuatiful quilt shows your talent as well as your patience.
Teddy Bears? Hmmm, must make a note of that. ;-)
Have a great day Rowan.
rel

I'm sure you'll enjoy trying out your new camera, and I bet the results will be superb. Cameras are so clever these days, especially in low light conditions.
The blanket is stunning! I had to smile at the picture of bears, you know why! A fellow Arctophile!

what a beautiful camera! you lucky girl!
the blanket is very very nice...
as for the poor exhausted young dad...I just take a nice pillow to put under his head, and give the gorgeous baby a kiss...I forgot they were so small...when I watch my son!!!I have to tiptoe to kiss him!!!
have a nice evening dear,
Mousie

Wow what a camera.

My first digital was basically a look and snap and got a lot of good use out of it.
Then I decided to move up to more of an advance camera
Well I'm still learning how to operate this new camera of mine.

I don't recall reading the brand of your new camera

What a nice camera Rowan! Love the blanket and teddies and poor Dad, he`s tuckered!

Enjoy your camera! The blanket is so intricate and beautiful - Bilbo is a sweetie and so is that little 'un :)

an 18X zoom?! mentally adding myself to the Jealous List :)

my son recently 'splained to me that my crummy close-up shots are probably due to the fact that I have a 3X zoom...

The baby is beautiful and so is the blanket. Did you knit or crochet? If it is crochet, I might like the pattern. I collect bears but mine are like yours, they adopt me. Looking forward to some great pictures with the new camera.
About Bilbo Baggins bed, do you wash all those blankets often. Smokey sheds all over his and I hate to have to wash them and get hair in the machine. I know he'd like it if I cleaned them, though.
Mama Bear

These wonderful digital cameras - I am still learning about mine - It can do so many more things than I can even begin to comprehend...

Dora, the camera is an Olympus SP-55OUZ.
Mama Bear, the blanket is a knitted one - crochet is not among my accomplishments I'm afraid. I do wash Bilbo Baggins' bedding regularly, then I run the washing machine empty on a Quick Wash cycle to clean it.