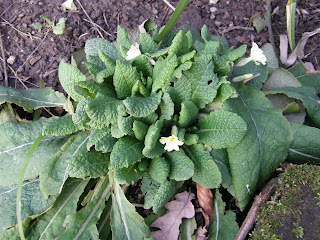 
The last couple of days have been a real mixture of weather, Friday was lovely, a real spring day beginning with a frost then blue skies and sunshine with high cloud floating by. It didn't take me too long to decide to spend some time working in my garden:) Above are the first primroses of the year. Before that though Bilbo Baggins had to be taken out so I took one or two frost photos before it disappeared. 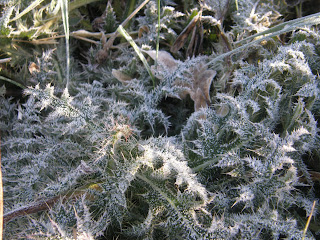 The remains of one of last summer's thistles covered in frost that sparkles in the sunlight. 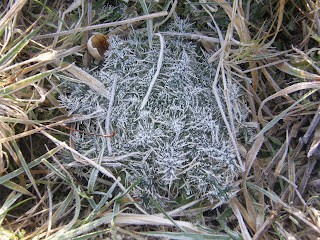 A young thistle that will be flowering later this summer. I am quite certain of my identification as I made the mistake of touching it very lightly with my finger because it looked soft and mossy. Wrong! It really,really hurt:) 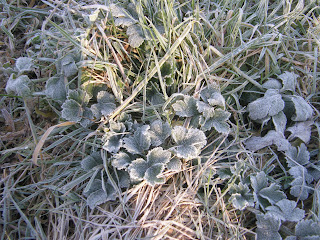 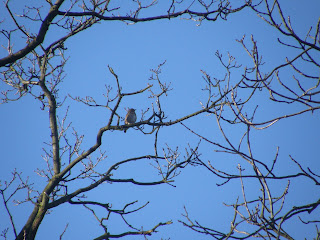 Isn't this sky a glorious blue? The bird is a song thrush who 'sings each song twice over,lest you should think he never could recapture the first fine careless rapture!
I think next month Robert Browning's lovely poem will be appearing in full on Circle of the Year. A click on the photo might make the thrush a bit clearer. It was at the top of a very high tree. 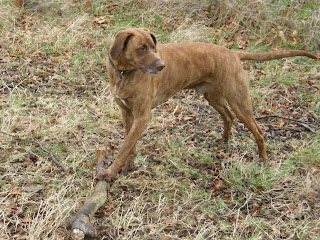 Mr Bilbo Baggins with his stick. 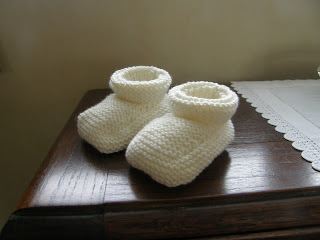 Gabriel's new bootees - right now both feet would fit in one of them but he's not far off 5 pounds and he's home with his mummy and daddy since Friday. 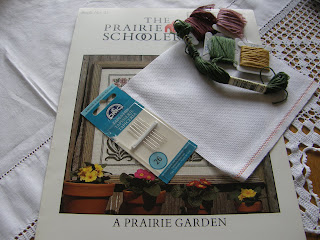 A new small cross-stitch project ready to be started - picture hidden so that the intended recipient won't see it:) 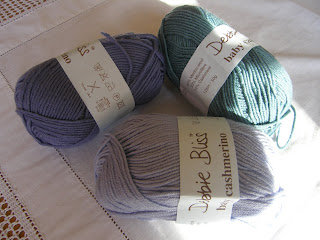 Yarn for more bootees for Gabriel, each ball of yarn makes one pair. They are so simple to knit and Hannah said that the ones I made for Kaitlyn were the best of the ones she had. They are warm and stayed put most of the time:)
Posted by Rowan at Sunday, March 04, 2007

Beautiful post! I always love seeing pictures of plants coming up in the spring! I would love if you would share photos of the buttercups once they bloom...they grew everywhere around the house where I lived as a child and I have wonderful memories of them!
What sweet baby booties!
Kelli

Rowan,
Glad to see you out rooting around with nature again. Even though you are a talented weaver of charming booties and bed throws, I think out-of-doors is your element.
The early morning frost is a magnet for my camera also. The pic of Bilbo owning his stick is priceless. Double clicking brings the thrush up beautifully.
I look forward to reading Robert Browning!
rel

I'm a Prairie Schooler fan too! I've got a few in my stash ready to do (when I get a round tuit!).

The bootees are adorable!

Thank you for coming over, from 'Morning Ramble.' I do the same... notice Comments and go take a peek at the commenter's Blog. :-)

I love your Blog title... 'Circle of the Year.' I love the concept of those words. And love to notice the changes, as the Year progresses.

Wish we were all more connected with such.

But in the modern world, where night never has to come, because of the flick of an electric light switch... And the like... It seems we have to almost 'fight,' to keep any connection with Nature's Rhythms.

Thanks for visiting my blog. I have just read some of your posts and see that congratulations is in order on the birth of your new little Grandson.He is so tiny and precious. I love the blanket that you made for him. Is that knitted?
Lovely blog....I shall return.

Yes, we are having a real mixture of weather at the moment, aren't we, veering from a sunny spring like day with some warmth in the sun and back the next day to winter, cold with rain battering against the window.

Beautiful blue sky - and what a handsome dog! We had a real promise of Spring today!

Love the baby booties, I think I have that same pattern actually. Maybe I will make some for Mei-Ling. Your new camera takes great pictures and isn't it fun to play with a new toy !

The circle of the year is amazing and full of wonder. Its good to pay attention to it.

Lovely to see your photos of similar signs of spring to those I photograph - primroses, hellebores, bluebell leaves in ancient woodland. Roll on summer!