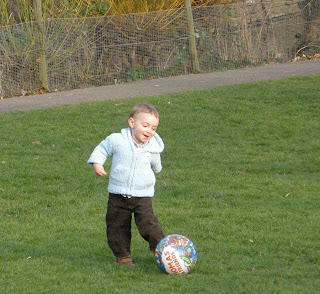 I spent Mother's Day weekend in Suffolk with Neil, Francesca, Gabriel and George. On Saturday afternoon Neil and I took Gabriel into Bury St Edmunds so that Cesca could have a rare opportunity to relax. We went into the Abbey gardens and played football. 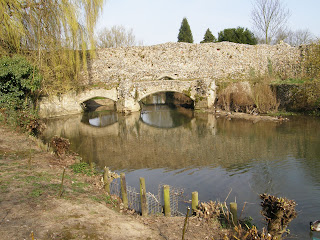 Then we walked by the river - Bury has two rivers both with delightful names, this one is the River Lark and on the outskirts of the town it has a tributary called the River Linnet.They must be among the prettiest river names in England. This is the Abbot's Bridge which dates back to the 12th century. 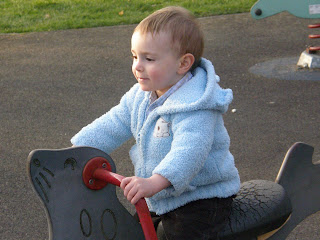 We went in the play area and rode on a sealion.... 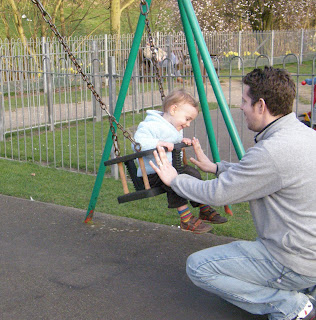 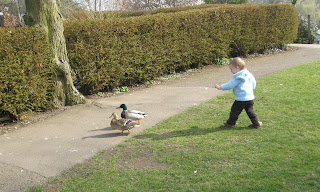 We tried to make friends with some ducks but they were rather reluctant! 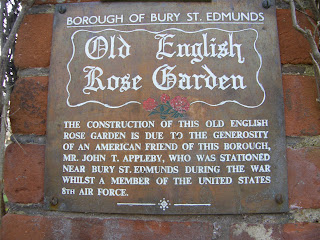 The American airman who donated the rose garden wrote a book called Suffolk Summer about his explorations of Suffolk when he was stationed at Lavenham and then Bury St Edmonds. I bought a copy on my first visit to Bury many years ago so I'm very familiar with the name on the plaque. 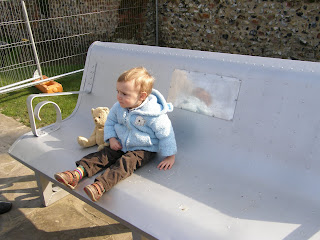 Gabriel and Alfie Bear sitting on a memorial bench donated by the USAAF and made from the wing of a B17 Flying Fortress bomber. 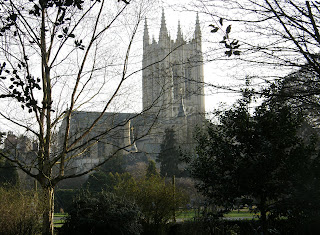 St James church which is now the cathedral of Bury St Edmunds but it was originally the parish church for the ordinary people of the town thus leaving the now ruined Abbey church exclusively for the monks. Bury St Edmunds Abbey was once a great Benedictine monastery, one of the richest in England. 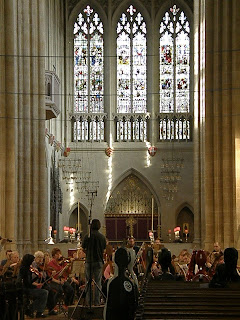 We went inside and found that the Suffolk Sinfonia were rehearsing for a concert to be held on Saturday evening, we sat and listened and we all, including Gabriel,really enjoyed it. We went right up to the orchestra and Gabriel was fascinated by all the musical instruments especially the big drums and the double basses. 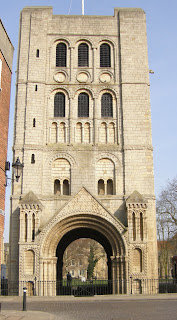 Finally we had to walk down the side of the Norman Tower built between 1120 and 1148 and one of the two great gateways into the Abbey. It was time to leave the gardens to go and buy a very special card for a very special mummy.
Posted by Rowan at Monday, March 23, 2009

What a sweet day, with your grandson.

Thank you for more photos and history!!

I hope you are having a wonderful week, Rowan. The weather is beautiful here at the lake. We're staying another week, at least.

Abbot's Bridge over the River Lark--that does sound romantic. Now I want to find a copy of Suffolk Summer to read. Thanks for sharing your weekend.

Your grandson is really cute! I'm glad you had the chance to spend a special day with your family. And thanks for sharing more of England history and pics.
Gracie at http://mylittleplace.blog.com

Rowan, is this the baby you mentioned who had been ill? What a little angel! Thank you for your kind words and thoughts. I still struggle with power that an anniversary of events has over us sometimes. I really believe it is to remind us that no matter what we have endured, there are always brighter days and joys ahead. Thank God for all of the really wonderful anniversaries in the our lives!

It looks like you had a perfect Mother's Day weekend Rowan. Little Gabriel is adorable -- I especially love him with his buddy Alfie!

It certainly looks as if you had a wonderful day out, getting up to all sorts of things! Let's hope the fun continues.

The view across the bridge is gorgeous X

Looks like you had a lovely weekend with your family - and what a great place to visit, too. I seem to remember a museum at Bury St Edmunds with a room full of clocks? It looks like the little ones had great fun and how lucky to hear the orchestra rehearsal - that happened to us once at Chester Cathedral when we were allowed to sit and listen to quite a bit of Verdi's Requiem.

Sounds like a great day Rowan. Isn't Gabriel growing up fast?! When I was little my friend's mother had a shop in Bury St Edmunds and I used to love visiting the place. Hope your Sunday was good too
Kimx

It's been quite a few years since I visited Bury St Edmunds. I loved it when I did visit. My sister used to live on the Suffolk/Essex border,in what I thought was a quite delightful area. I would love a visit to Suffolk again..soon!
;-)

How beautiful--your grandson is a treat. Starting early with soccer, isn't he? he may be the next big star!

The bridge is like a poem, with the name and the river. It's one of those scenes that is so perfect it looks unreal. Like a scene from a fairy story or medeival romance.

I love the bench donated by the US AAF. My Dad was in the Army Air Force, stationed at Steeple Morden. That's how he met my mother, who was from Caldecote near Cambridge.

Gabriel is just the cutest little guy! What a wonderful day you had, and Happy Mother's Day even though I'm very, very late!

I took a peek at your previous posts and enjoyed all the photos from the tour. I've been holed up in the studio so much lately that I'm missing out on everything in Blogland!