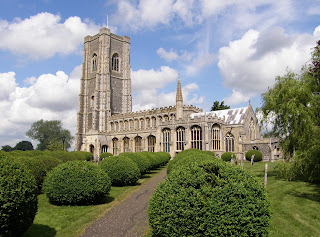 PART ONE - THE CHURCH

I've intended to do this post on Lavenham ever since my visit there last September so I thought I'd better get on with it before any more time passes! All the photos will enlarge if you click on them.
The parish church of St Peter and St Paul at Lavenham is one of the finest in England. The building of it was funded largely by the local Lord of the Manor John de Vere, the 13th Earl of Oxford and several local wealthy cloth merchants especially Thomas Spring. John de Vere wanted to build the church in thanksgiving for his safe return after the Battle of Bosworth during the Wars of the Roses. He was one of the chief commanders on the Lancastrian side which, happily for him and very possibly thanks to him, was also the winning side. The building began in 1486 on the site of an earlier church of which only the chancel remains. The church stands on the top of a hill and can be seen from miles around. 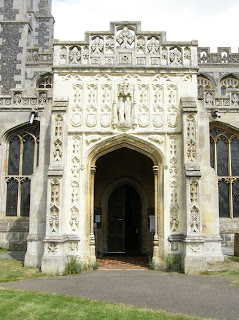 This is the magnificent South Porch - the shields above the entrance bear the de Vere coat of arms and the two figures in the central niche are St Peter and St Paul to whom the church is dedicated. 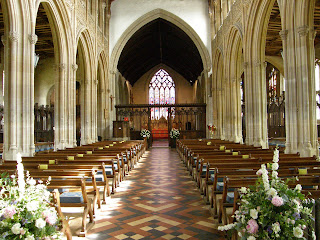 The nave is really beautiful with its wonderfully carved arcades which are a real testament to the skill and artistry of the stone masons who made them nearly 500 years ago. The chancel screen dates to the mid 14th century and has had a somewhat chequered history. Many churches suffered damage and neglect after the Reformation and then a century later during the period when Oliver Cromwell was Lord Protector of England. His troops did irreparable damage to many churches during the time of the Commonwealth (1649-1660). It is rumoured that at one stage the rood screen doors formed part of the churchwarden's pig pen before being restored to their original position in the early 20th century! 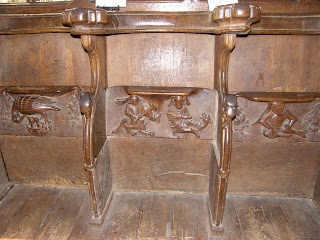 Some of the beautifully carved misericords in the choir including the one on the left which is known as 'the pelican in her piety'. A misericord is a kind of shelf on the underside of a seat which gave some support to elderly or infirm clergymen during long periods of standing during services. 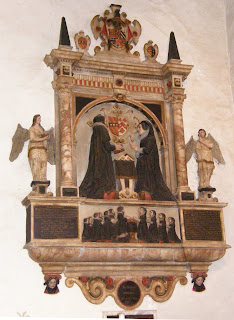 The Copinger Memorial which I think is rather splendid. Henry Copinger was Rector of Lavenham from 1578 to 1622. The memorial shows a lot of detail - Henry and his wife are kneeling at a prayer desk and are wearing typical Puritan clothing in black and white. Below them are their children, 7 sons and 4 daughters. A son and a daughter are holding skulls and this symbolises the fact that they died before their father, and the eldest son has an infant at his knees. Part of the monuments inscription reads that "His most beloved wife, Ann, and unwilling survivor erected in her sorrow this monument of love and devotion" 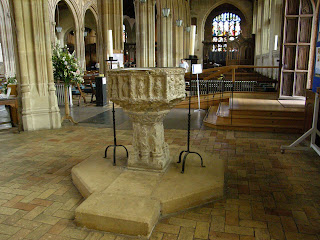 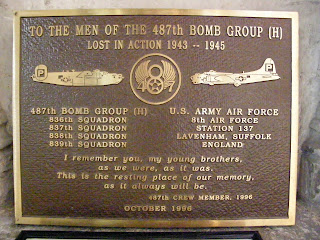 In the south west corner of the south aisle is this memorial plaque to members of the 487th Bomb Group of the US Army Air Force who were based at Lavenham Airfield from 1944 and flew the famous Flying Fortress bombers on over 6000 sorties from here losing many brave young men as a result. 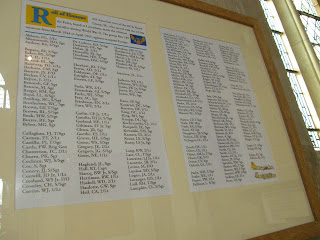 It occurs to me that there might be someone reading this who had family members serving with the 487th so I am putting two photographs up of the Roll of Honour of those who lost their lives - both are quite readable if you click on them. 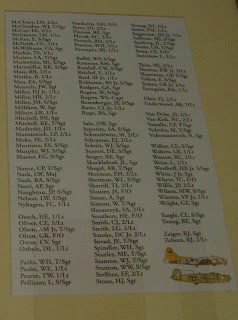 This is the righthand page which isn't very clear in the first photo because of the way the light was shining in. The young men who gave their lives are still remembered and honoured in the UK.
Posted by Rowan at Wednesday, March 11, 2009

Thanks again for bringing something british to me today, I really need it!
Gracie at http://mylittleplace.blog.com

I love it when you share the beautiful churches and buildings that surround you. It's so incredible that they could be built so many years before big equipment and newer technology. Thanks Rowan!

Lovely pictures. And your previous rambles in the spring countryside are beautiful too.

But the wool, the wool? The fleecy riches that enabled Lavenham to be built?

That is lovely Church Rowan and a great shot of it from the position you were at.
There are so many other WW2 Airfields in East Anglia where you could tell exactly the same story as this.

A beautiful church, Rowan. I always appreciate the history you give in your posts!

Thank you for taking us on your visit - the pictures and text are both enlightening. I love all things medieval - I studied medieval history at university and have never lost my love for it. I rarely get to your side of the ocean, so enjoyed your post all the more!

Thanks for visiting my blog!

I visited Lavenham quite a few years ago. The buildings have a gentle grace. I always enjoy looking around cathedrals in particular.

I'm also enjoying listening to your playlist. Thank you.

A lovely post. I would so enjoy a Spring visit to this church, it looks so peaceful and beautifully kept.
My Mum was a WAF and I seem to recall her mentioning Lavenham, I wonder if she was stationed there. I'll never know now.
I was unaware of the story of the pelican and it's reference to Christ. As usual I leave here having learned something.
xx