The Rubaiyat of Omar Khayyam 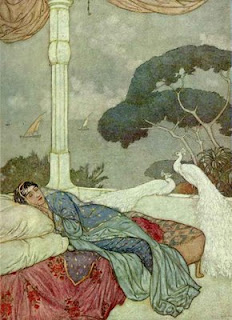 Following a recent post by The Weaver of Grass I acquired a copy of The Rubaiyat of Omar Khayyam earlier this week and on Tuesday I sat out in the sunshine to read it.It was translated from the original Persian in 1859 by Edward Fitzgerald and became a great favourite of the Pre-Raphaelites without whose interest and support it would probably have sunk without trace. These illustrations from The Rubaiyat are by a wonderful French illustrator called Edmund Dulac who was working in the early to mid 20th century and was greatly influenced by the Pre-Raphaelite artist Edward Burne-Jones. 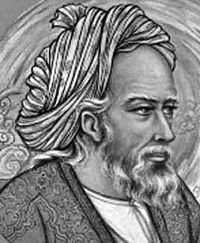 Omar Khayyam was a Persian poet,philosopher, mathematician and astronomer who lived between 1048 and 1151. This portrait is in his mausoleum at Nishapur, the town where he was born and lived for most of his life. 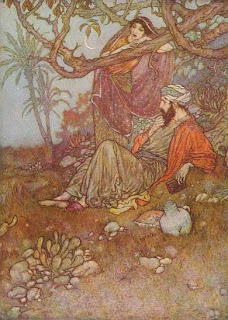 I suspect that a great many people know parts of the Rubaiyat without being aware of it. For instance:

Here with a Loaf of Bread beneath the Bough,
A Flask of Wine, a Book of Verse- and Thou
Beside me singing in the Wilderness -
And Wilderness is Paradise enow.

" The Moving Finger writes; and, having writ, Moves on: " are also well-known lines from The Rubaiyat. They provided Agatha Christie with the title for one of her Miss Marple stories. 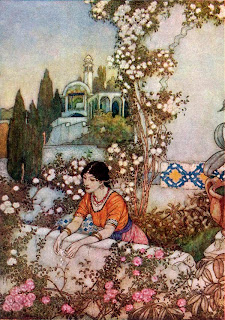 I have always thought that the Rubaiyat was a poem of love and romance - actually it's a bit of a drunken rambling written as Omar Khayyam spends the day in an inn getting progressively more intoxicated and morose as the day goes on! Dulac did a series of beautiful illustrations for the book, however I am not matching them to the lines he wrote them for but to the ones that appeal to me:) My favourite lines are the opening quatrain which The Weaver also quoted:

Awake! for Morning in the Bowl of Night
Has flung the Stone that puts the Stars to Flight:
And Lo! the Hunter of the East has caught
The Sultan's Turret in a Noose of Light. 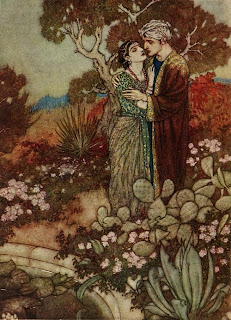 Come, fill the Cup, and in the Fire of Spring
The Winter Garment of Repentance fling:
The Bird of Time has but a little way
To fly - and Lo! the Bird is on the Wing. 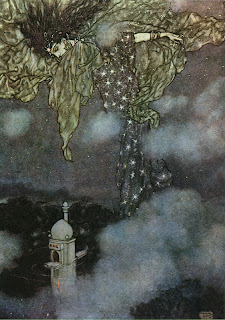 The title of this illustration from the Rubaiyat series is The Sleeve of Night - less colourful but with a tranquil, dreaming quality that I love. 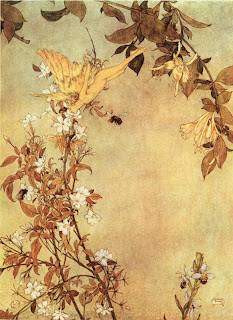 Edmund Dulac illustrated many other fairytales and books including The Arabian Nights and Shakespeare's play The Tempest from which comes this lovely drawing of the sprite Ariel. What I would love now is to discover where there are examples of his original artwork that I could go and see.
Posted by Rowan at Thursday, April 02, 2009

Hello!
You have inspired me to read this book. I love the work of Dulac too. Have a great weekend
Kimx

Absolutely beautiful post, Rowan!! I loved every bit of it.

The illustrations are beautiful, particularly the sleeve of night.

We have a copy of the Rubaiyat which I must look at to see what it has! We also have a more modern edition of the Tales of 1001 Nights that has super illustrations too. Our Arab brothers could tell a good story.

Your Blog is like a good book...I don't want to put it down...so enjoyed this post and others...and I have more yet to read!...Glad I found you.

Very interesting Rowan! I've heard of this work but knew very little about it. Thanks so much for posting!

Beautiful verse and images. Thank you for this wonderful introduction~

I shall be back.

That sounds like a wonderful book and I love the drawings too. Beautiful !!!!

when I first met Joe, my husband, this was one of his favourite things to read.. I don't quite grasp it but I do love the illustrations..
I hope you are enjoying springtime, I am relishing autumn here in Woodford xoxo

what wonderful words~and now a book to look out for, i really love the art work that goes with it :)

Isn't it funny how many lines and quotes stay in our heads. I have heard and knew most of the ones you mention, but for the life of me, could not have told you where they came from!

I picked up a beautiful copy of the Rubaiyat that was being sold off at a university library. I got it for $2.

The illustrations were just as lovely, but by a different artist. I say 'were' because, although the book was beautiful, I knew that I didn't appreciate it as it should be appreciated.

While sitting in a math class one day (Abstract Algebra), the substitute prof. for the day stopped and quoted some of the Rubaiyat. When no one recognized it he looked disappointed (I'm quiet and don't speak up).

Anyway, I thought that this prof. might enjoy the book the way it was meant to be enjoyed, so I slipped it into his mail cubby in the math office one day with an anonymous note.

Thanks for posting about the Rubaiyat and its lovely, drunken ramblings.

Those are wonderful illustrations. I inherited a copy from my Dad. I shall have to look and see who illustrated that because it is quite a similar style. Thanks for sharing.