The Drawer of Infinite Possibilties! 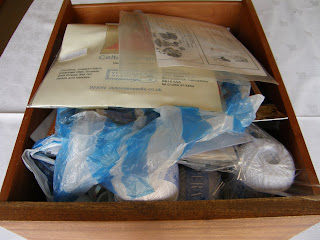 I am almost at the point of completing a cross-stitch sampler which I began at least eight years ago, possibly more! This is unlike me, usually I begin something and finish it reasonably quickly but this sampler contains a few other stitches apart from cross-stitch and one is called Queen stitch. I kept looking at it and couldn't work out how it was done,I passed the first area where it appeared, leaving gaps. I did the same with the second area and all the time I was leaving it longer and longer between each stitching session. Last summer I virtually finished the cross-stitch and backstitch then it went away again. After I finished knitting the blanket for my newest grandchild I decided I wanted a change so thought that I'd get out the sampler, crack the mysteries of Queen stitch and get the so-and-so thing finished! What the expression on the lady's face will say when I take it to be framed I dread to think - after eight plus years it's rather the worse for wear.......
Anyway after this triumph I've decided to look in The Drawer and see what else I have that needs finishing and make this the Summer of Finished Projects. Clicking on the images will enlarge them if you want to see them more clearly. 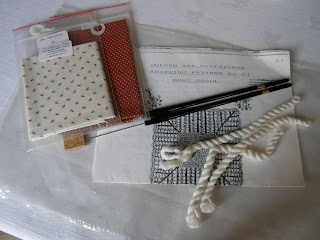 In the past I have had a mild interest in doll's houses mostly because my friend L has a couple of really fantastic ones which she has done a lot of work on over the years. I went to one or two Doll's House events and obviously got carried away one day and bought this kit for making a miniature baby's shawl. The needles are incredibly fine and the things that look like bits of string are actually hanks of wool! And there are two small pieces of fabric - I don't even know what I had in mind for those - a quilt? miniature cushions? Who knows - somehow I think those will be staying in the drawer for a while yet. 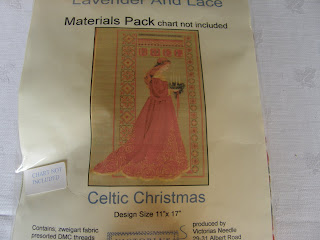 I love this design - actually I bought the chart first and then came across the pack with the silks and fabric in. This is a possibility - but it has beads on it and I've never done any beading. On the other hand if I never try I shall never know whether I can do it or not. 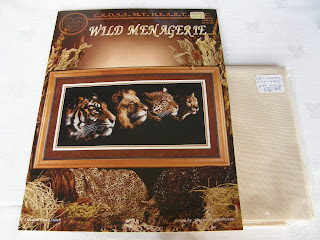 I bought this to do for my elder son and his wife, they have lived in Africa and have a lot of African bits and pieces in their home so it would fit in. Could I get it done by Christmas? Of course I could - just don't ask which Christmas:) 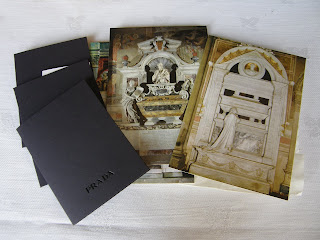 Now what are these doing in this drawer - souvenirs from a visit to Florence with my daughter a year or two ago. Postcards from the church of Santa Croce showing the tombs of Galileo and the great Italian composer Rossini. Michelangelo is buried here too. As for the receipts from Prada - my daughter made me go in there! I didn't want to, really I didn't! 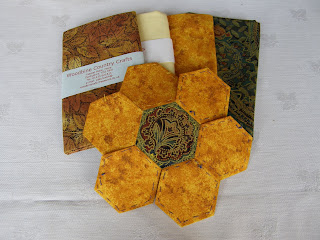 Think I must have had my sunglasses on when I bought this fabric. It's aim in life is to become a cushion cover - it can go in the Lancashire house in the conservatory if it ever gets finished. 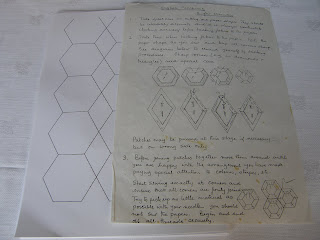 Oh joy! I still have the instructions and lots of card templates for the patches! Yeeeeah!!! 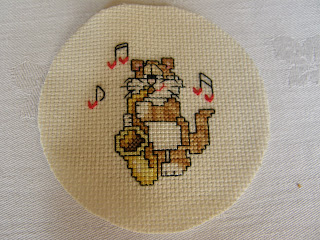 Now this little chap is finished but didn't get framed. I feel a stocking present for a small grandson coming on...... 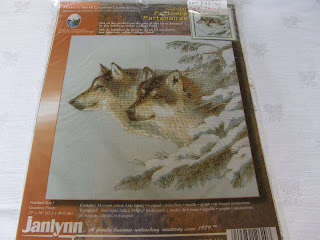 More cross-stitch, this was definitely bought for me, wolves are my favourite animal. 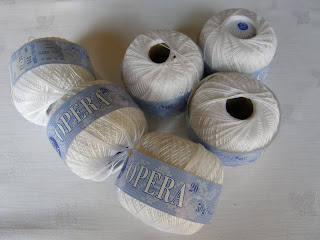 Hmmm, yes, well! One day I will learn to crochet and then I can make a lovely lacey something with all this cotton yarn. 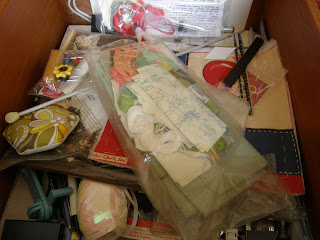 You mean you thought the drawer must be empty by now? Oh no, there's still.... 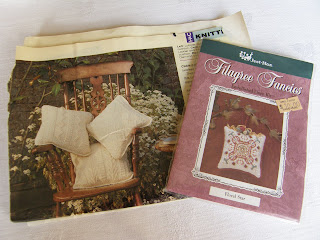 ....the pattern for some knitted cushion covers. Now these are in with a chance! The beaded cross-stitch ornament is pretty and would be good practise for the Celtic Christmas picture. 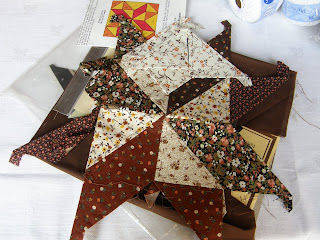 Well, well, what have we got here? It's the doll's pram quilt I'm making for my daughter - she'll be 29 next week :):):) Perhaps I'd better move the goalposts a bit and say it's for my granddaughter! 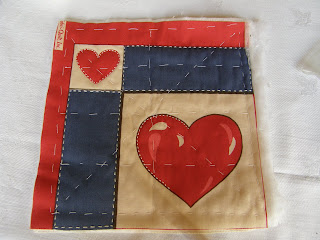 And here's a potholder waiting for me to finish quilting it - if I can still remember how. 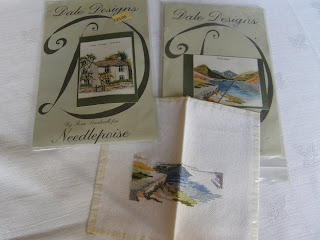 Probably about time I finished Wastwater off I think, I'd forgotten it existed (the sewing that is, not Wastwater!) but it's rather nice so I might put that near the top of the list. That's a nasty crease down the middle, why on earth did I fold it? It isn't exactly gigantic! Actually I can't help having a horrible feeling that it got left because I made a mistake somewhere......... 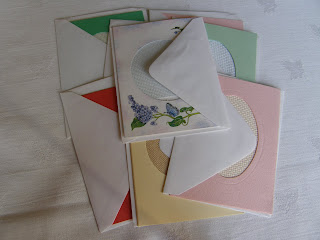 Apparently I was intending to make some cards - I used to do a lot of cross-stitch cards and sell them at craft fairs and I could certainly produce one or two for various birthdays - I'd completely forgotten I had these too. 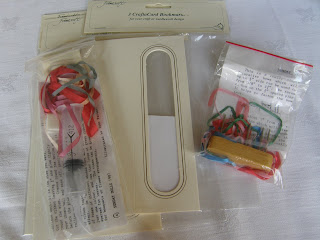 As for these - WHAT was I thinking? Bookmarks, yes I'll make those up but if I have the other two forever more I still shan't be making tiny bows or rose ribbons for doll's houses. If anyone could make use of them I'd be happy to pass them on. If there should be more than one I'll get DH to pull a name out of a hat. I confess I'm not expecting to be overwhelmed with requests:)

So there we are - which shall it be? Wastwater I think, then Dove Cottage. Let's just hope I don't fall off my perch before I get the rest of them finished.
Posted by Rowan at Friday, April 17, 2009

You are going to be busy this summer!! Please save time for us!
This is an inspiration, I must say. I think the Celtic Christmas will be something very special when it is done.

Oh. NOW I can say, good luck with the sampler. That's quite the impressive pile of projects there. At least, it's good to have choices!

I admire your determination.
I came across a few bits like this last year while having a sort out, and I put them in with the things I had boxed up for the charity shop. I always have good intentions when I buy them, but often they don't get a second look. The Celtic lady would be a lovely addition to your Christmas decorating.

I did a big angel by MLI on linen, it took me about 3 years, alongside other projects. Hard on the eyesight though. There's a pic in my Flickr album, I think.
My sister did Celtic Christmas, it's lovely and hangs in her living room.

Oh, this is so funny. I have rooms full of stuff like this--a chair to recover, a tea cozy to embroider, and like you, a doll house quilt to do (only mine is a dollhouse wall hanging).
Your drawer must be pretty big to have all these projects in it.
We have a summer wedding coming up, but first finishing the basement project, then maybe I'll get to the fabric I have stashed...

What an interesting - and deep drawer. Good luck on your projects. I gave up on x-stitch a while back. Too hard on these eyes, quilting is bad enough.

That comment about falling off your perch made me laugh - not at the prospect of you doing it - but I'd never heard that expression before.

Have fun with the stitcheries.

Yes, I have quite a few unfinished projects tucked away in drawers too! I always seem to get distracted and then move on to something else - and in the summer, the garden beckons!

Does this ever look familiar! I have unfinished projects all over the house and I'm afraid most of them will remain unfinished! I have so many counted cross stitch pictures started. I used to do them all the time. Now I doubt I'd have the patience to do them. Good for you for getting your projects out and deciding to work on them. You're way ahead of me!!

What a joy to find that other people have drawers such as this -- but --- you have turned the drawer into an artistic project all itself.

When you finish all of those - I have a drawer you may sort through :) It has a lot of dollhouse projects way in the back even some petit petti point.

You certainly seem to have plenty to keep you occupied. And what's this about falling off your perch? Just concentrate on your footwork!!

What a wonderful drawer of possibilities!! I've started projects then given up and passed them to my eldest daughter.

You are obviously going to be very busy Rowan. At the beginning of the year I announced that this year was for finishing off projects and making use of existing materials, but I wasn't brave enough to picture my stash! Good luck, I'm sure that you will finish before me! Best wishes, Pj x

Wow, so many possibilities !!! I just wouldn't know where to start, so I understand your problem ; ) I love the Celtic Christmas picture. That must be a lot of work, but I love how it looks. Good luck with all the work ; )

This is not a drawer, it's Mary Poppins bag!!!!
Gracie at http://mylittleplace.blog.com

I think you are going to be a very busy lady!

Glad to know I am not the only person with a drawer full of unfinished projects.