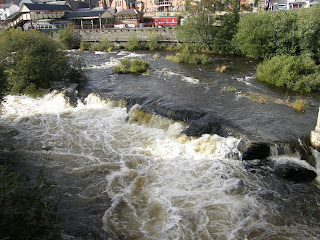 A bit of back tracking is involved here as the visit to Wales was made in mid September just as the tail end of Hurricane Katia arrived in the UK! We spent the first night in Oswestry which is just on the English side of the border. Kaitlyn was so desperate to actually be in Wales that late in the afternoon we drove over the border and into the small Welsh town of Llangollen.The photo above is the River Dee which rises in Snowdonia and flows through the centre of Llangollen then on towards Chester. 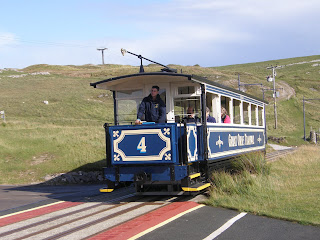 The next morning we headed for Llandudno on the North Wales coast. My DH had told us that we should go up the Great Orme as it was really worth seeing. We managed to park very close to Victoria Station where the Great Orme Tramway begins its ascent.
This is the only cable-hauled tramway still operating in Britain and has been taking people up the Great Orme since 1902. With wooden seats and no glass in the windows it isn't exactly luxury travel:) The line is in two sections the lower half being the steepest with a gradient of 1 in 4. At Halfway Station you have to change on to another tram to do the second half of the journey to the top. 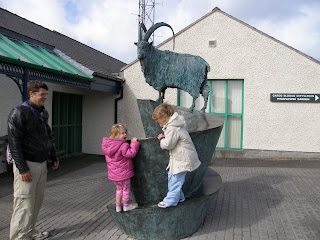 Journey's end - just outside the little station at the top is a statue of one of the feral Kashmir goats which have lived wild on Great Orme for over 100 years - the original goats came from a herd at Windsor Great Park which belonged to Queen Victoria. 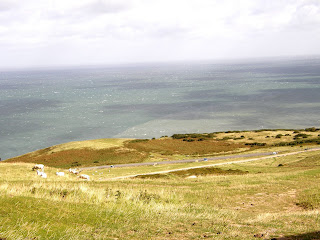 Maybe you are wondering what the word Orme means (or maybe you aren't but I'm going to tell you anyway!)- it's believed to originate from the old Norse word 'urm' which means 'sea serpent'. The Vikings thought that the headland resembled a coiled serpent. The word worm has the same origin.
Our original plan was to do some walking and visit the iron age hillfort and hut circles and also the 12th century St Tudno's Church. The wind was incredibly strong though and once out of the shelter of the station and up on the summit it was obvious that we weren't going to be able to do this. Kaitlyn and Lucy were actually being blown about by the wind and I had trouble standing up in it as well. The different shades of blue and green in the sea were really beautiful but the photo isn't sharp because I couldn't hold the camera still. 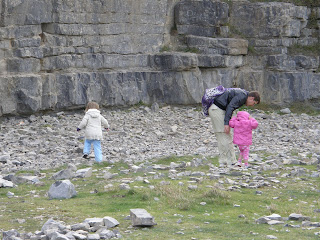 Instead we headed down the hill to Bishop's Quarry and looked for fossils. The limestone here is full of the fossils of sea creatures from the time around 300 million years ago when the land that is now Wales was covered by a shallow tropical sea. The fossils you find have to stay put though, you aren't allowed to take any away. 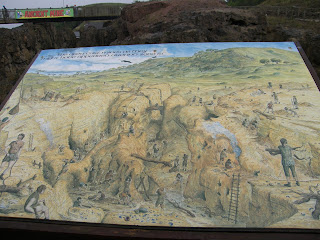 Steve was anxious to visit the prehistoric copper mine so we went back down to Halfway station and followed the signs to the Ancient Mine. Originally there would have been opencast mining and this is an artist's impression of how it would have looked 4000 years ago. You'll need to click on it to see it more clearly. 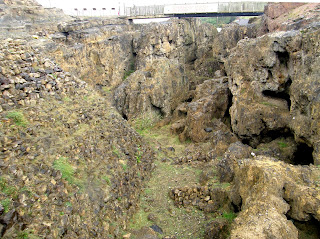 This is the opencast site as it looks today. 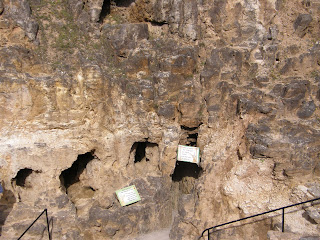 If you want to go into the underground mines then you have to wear a hard hat so after collecting these we set off down the path to the mine entrance which is that narrow opening under the righthand sign! More clicking required here. 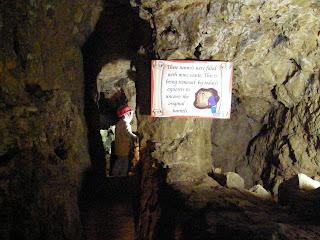 Kaitlyn and Lucy absolutely loved it in here much to my surprise, I thought they'd find it either boring or scary but I was wrong! All the tunnels are very narrow and the narrowest could only have been worked by children, some of them as young as five - the age that Kaitlyn is now. The mining was done using stone hammers and bone scrapers and mostly in total darkness. Archaeologists have so far found over 2500 stone hammers and over 30000 bone scrapers in the mine and more than half of it has still to be explored. Every so often as we made our way through the tunnels we found these little information boards. 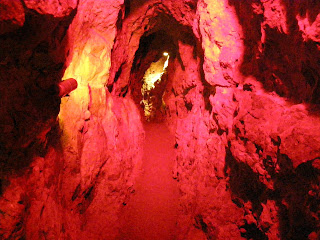 I love the colours in this photo and it also shows again the narrowness of the tunnels. The tourist route through the mine only goes down through two levels but there are nine levels descending to a depth of about 230 feet/70 metres. 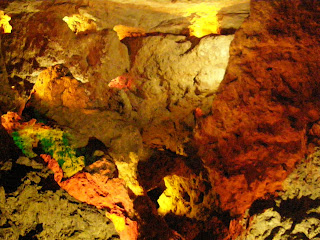 This is the 3500 year old Bronze Age cavern, it's thought to be the biggest prehistoric underground excavation in the world. At this point we were about 80 feet below ground. 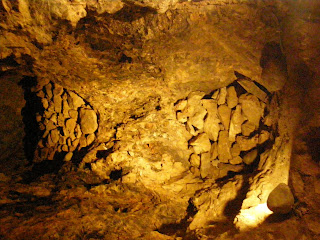 These tunnels were blocked up with mine waste during the Bronze Age and are still to be explored by the archaeologists - this is an ongoing archaeological project that will last for many years. It's been estimated that more than 1700 tonnes of copper was extracted from this mine during the Bronze Age, enough to make 10 million axes! The copper was combined with 10% tin to make the hard alloy Bronze which was used not only for axes but also for many other items too including swords and jewellery. 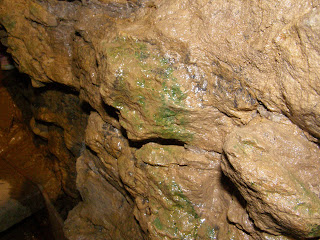 This clearly shows the green malachite which contains copper. It has to be smelted at a very high temperature to extract the pure copper metal - 1100 degrees centigrade to be precise. 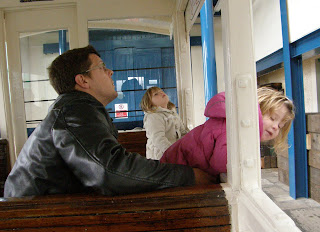 Eventually we returned to the surface again after a really interesting and fun visit. We were first on the tram for the second half of the descent back into the town so had time to make a thorough examination of our surroundings:) 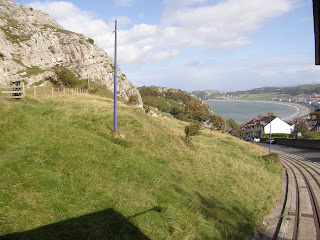 The ride back down provides some spectacular views, this is about halfway down with the sweep of Llandudno Bay and, finally, a bit of blue sky. 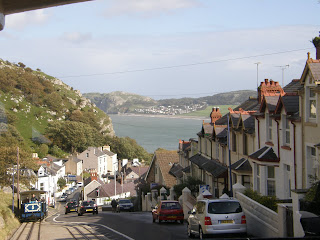 This is about the steepest part of the tramway and you really,really hope that the cable doesn't break at this point! On the left is another tram on the way up. One day I'd like to go back and spend more time both in the town and on the top of Great Orme but we still had quite a long way to travel before reaching our hotel in Caernarvon. In my next post we'll visit Caernarvon Castle.
Posted by Rowan at Wednesday, October 12, 2011

Enjoyed the trip to Wales, we've only been once about 15 years ago. My husband is dying to go looking for fossils, we do go along the Dorset coast one time, and we're planning a trip out west next year to hunt.
I know you enjoyed the visit with your son and his family, lucky you!

Amazing caves - I always find the thought of going underground a bit scary, though - along with great heights! I guess that I am just a bit of a scaredy-cat all over.

What a fabulous day out, all so interesting Rowan. You were brave to clamber through those tiny tunnels - I think I wold have been a little claustrophobic! Imagine tiny children being put to work as miners in the dark no less - how far we've come in labor practices, thank goodness!

Love the tramway - that view coming back to the shore is gorgeous.

Glad you weren't blown away and could share this interesting history of part of Wales.

Great Orme isn't my favourite part of Wales (Well - Llandudno really) but you made it look really good. Perhaps I should give it another try!

Love Wales.Spent many happy and relaxed holidays at Cymtdu over the years.

All these places are very familiar to as my in-laws lived here for many years. My youngest son climbed the Orme and went down the mines. We have similar photos to yours. The thing we liked about Llandudno was that he accommodations were free and that it was a good starting point for a lot of other nice places in North Wales.

Amazing photos. I've been to Llangollen before and stayed at The Hand. Wasn't aware of all the mines and caverns - must feel incredible to touch history in that way. Perhaps my curiosity would overcome my claustrophobia.

Thanks for sharing your experience and photos.

Like Kathy, I have childhood memories of Llandudno but it wasn't until about 4 years ago that I travelled on the tram and visited the copper mine - haven't been to the quarry, though. I'm looking forward to your next post on Caernarvon Castle:)

How unfortunate that the weather wasn't cooperative. Still you had a nice outing. I'm surprised the children weren't leery of the dark. They seem very adventurous. Malachite is one of my favorite stones. Such a pretty color.

The colors of the sea are so wonderful. Sorry the weather didn't cooperate.

They look just the right age for fun on that sort of trip. xxxx

Loved the tour! Those tunnels are truly fascinating - what an amazing amount of work - where does one begin, especially when you are using stone and bone implements!

Like most of your other reader, I too have childhood memories of Llandudno. We lived very close to the Welsh border so it was always a go-to place for vacations, along with other towns along that coast. There seems to be no end of interesting side trips, and you obviously enjoyed this one. It is very interesting.

Well I never (silly expression!) I have covered much of the same ground in the past and never knew half as much as you have imparted here. Thanks for filling in some gaps and the wonderful pics.

You had such an interesting trip to see amazing things....can't wait to read more about it.

You do travel to very interesting places and it is so nice to enjoy that time with the little ones too!

Happy to hear you are thinking of Christmas too-for me it adds interest to the rather gray days of November.

Such an interesting trip - thank you.

we are off to Wales next summer :)
the mention of Orme is interesting for I have ancestors with the surname Ormes (possibly started as Orme) i like to imagine that maybe a distant ancestor was maybe a viking!