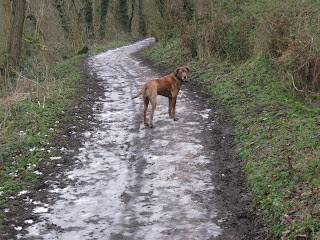 No,not B Baggins:) He is quite definitely not the little maid! Here he is walking up the bridle path onto Blackamoor yesterday morning. It was still very icy which took me by surprise as all the roads and footpaths were clear. As we walked along though we discovered several little signs of Spring along the way. 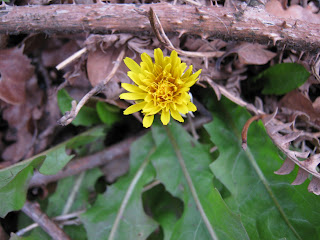 This single dandelion flower peeped out from a sheltered spot beneath the brambles. 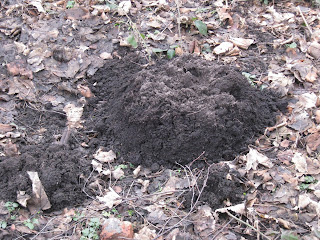 Further up the track Moldywarp the Mole had obviously been busy. I love this little passage from Wind In The Willows - perhaps this is what Mole had been up to:)

The Mole had been working very hard all the morning, spring- cleaning his little home. First with brooms, then with dusters; then on ladders and steps and chairs, with a brush and a pail of whitewash; till he had dust in his throat and eyes, and splashes of whitewash all over his black fur, and an aching back and weary arms. Spring was moving in the air above and in the earth below and around him, penetrating even his dark and lowly little house with its spirit of divine discontent and longing. 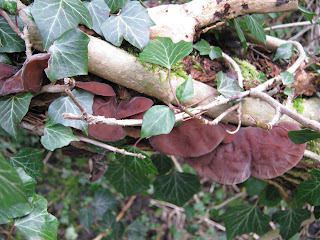 I'm pretty sure that this is Jew's Ear growing on a branch of elder - if it is Jew's Ear then it's edible and is used in herbal medicine too. The new growths appear in January and can survive freezing temperatures without coming to any harm. 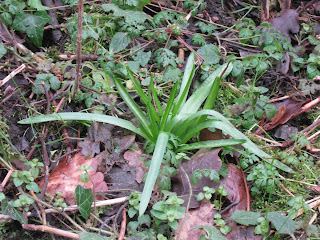 A few bluebell leaves are beginning to push through though it will be a while before we see the wonderful sheets of hyacinth blue flowers. 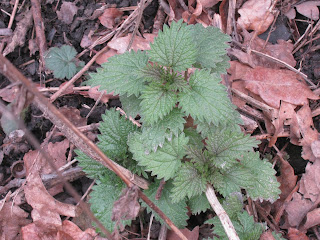 The fresh young growth of nettles is appearing too - this was always used as a Spring tonic and it is rich in Vitamins A and C as well as potassium, manganese and calcium. It's one of the nine Anglo-Saxon sacred herbs so it's use goes back into the mists of time. It can be cooked like spinach or used to make nettle beer and when they are past the stage of being used like that they are an excellent addition to the compost heap. 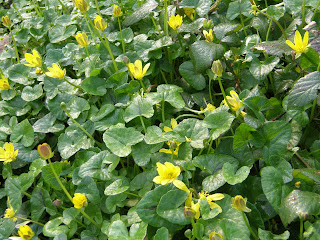 And here at last comes the little maid - this is taken from A Walk Down The Lane by Ernest Aris and conjures up such a lovely picture, the celandines are still to appear and those in the photo above are from last year.

The Rip Van Winkles of the wild lie quiescent in their winter habitats, awaiting the days of warmer winds and softer airs. Around a bend in the lane comes a little maid: on her shoulders the snow lies thick. It fills the folds of her dress and mingles with her bonny brown hair. But there is April in her face and July in her eyes and in her hands are celandines and yellow coltsfoot blooms.
Posted by Rowan at Wednesday, February 15, 2012

Yes thats Jew's Ear alright D.
"Auricularia auricula-judae" to give it the latin name.
You had me fooled with the Lesser Celandines for a moment though.

I envy you your ability to identify plants!

What a lovely walk - I always enjoy tagging along with you. I saw our first dandelion the other day also.

Delightful and one of my favourite quotes too.Here we have the very early first signs of Autumn - vintage has only just begun but the leaves are turning.

It gives you a bit of hope doesn't it when you see the first signs of spring. Bring it on!

Have not read WITW since I was very young but have added it to the shortlist now.

What a lovely post and photos. We have had sporadic flowerings of Celendines since New Year's Eve, but there are more leaves coming through now so we should have those happy little golden maids with us soon.

A lovely post, Rowan, and I am astounded by your talents as a naturalist. One of my great failings is that I seldom take the time to identify the gifts of nature that I so appreciate.

Love your post Rowan. I've been to some lovely woodland gardens today that were covered with snowdrops - posting tomorrow.However I couldn't identify some yellow ground cover flowers amongst the snowdrops and I'm pretty sure they were the celandines you pictured. So thanks for that.

The first dandelion? Another beautiful walk!
I hope you had a nice Valentines Rowan.
Hugs Rosemary...xxx

Certain signs of Spring Rowan, do you partake in Nettle Tea? Winter is still keeping us company here in Maine!

It's been almost 60 years since I left England and I can still identify many of the wild flowers of my childhood. Beautiful post.

Celandines remind me of our school nature walks into the local woodlands in the village where we lived. Loved the extract from Wind in the Willows - I noticed whislt we were out walking a few days ago that the moles have been busy:)

Lovely post Rowan. I have Celadines in the garden, my favourite is called 'Brazen Hussy' and it has dark bronze shiny leaves, always a welcome sight in Spring.
Do please tell us more about those nine sacred herbs.

lovely posting. We have mostly snowdrops up here at the moment - but there is a wood I must go and check, hmmm!!

I love to see celandines.I'm feeling cross with myself at the minute because there were a load in our front garden which choked everything else last year so I pulled most of them up. But I hope the ones that I left will flower and just not choke everything. I should have had the sense to transplant them to the back which is large and has some wild areas. Will do it next time.

When I saw the photo of the celandines I was astounded. We have one or two out but . . . oh! Last year!

You may be interested that I had Jew's Ear in a post at http://goo.gl/eUUGJ and am hoping I was right with my ID!

Thought I'd mention to you some things you might enjoy: "The ShapeShifter's Wife" by Sharon Shinn and "In the Forest of Serre" by Patricia McKillip, for when you might be interested in a change of pace.

What fun to go on this walk with you! I love The Wind in the Willows and this too is a favorite passage of mine. It sets the mood for the wonderful book. Have you ever read the sequels written by William Horwood?

Beautiful pictures !! Bilbo could nearly skate ; )
Have a great day.

A lovely springtime post. Thank you. It was good to read about Mole`s housekeeping. He has been busy in our garden too!

Hi Rowan..i loved this magical post..awesome!! i too am a flwoer and herb kindred and deeply respect their sacred medicines! It is so wonderful seeing all this nature coming to life in your photos....here in Canada we still are covered in snow..and i long to see what you are experiencing now! Enjoy!shine on...so beautiful!
Victoria

It's a good idea to go and capture the first signs of spring, the dandelion flower looks great!

PS I see that I'd better read the Wind In The Willows story, I might understand then who's active under all those molehills in my garden... :-)

Spring is in the air and the wild spring flowers are out early this year!
Your photos are refreshing to see the beginnings of a new season. I like the fungus and they do look like ears. Maybe pixie ears. ;-)

Bilbo is looking very handsome. He is indeed a fine hound! xx
Have a good weekend,
Jo.

Rowan, a lovely Spring flavoured post! Isn't it wonderful to see the peepings of loveliness showing through. I am so looking forward to the seas of bluebells soon to appear in our woods. That piece from wWind in the Willows is one of my faves, I love the picture is conjurs. Lovely memories of my Grandma reading it to me as a child. Have you ever tried nettle beer or soup ? x