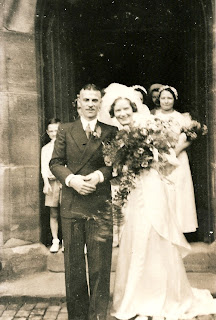 Today would have been my Dad's 100th birthday so I thought I'd do a little post to remember him.He was born on March 4th 1912 the second of nine children. Sadly I have no photos at all of him as a child or young man, this one taken on his wedding day in 1938 is the earliest one that exists as far as I know. He was 28 years old here. The little boy peeping out from the back is my Uncle John, Dad's younger brother and the bridesmaid on the right is Aunty Winnie one of his sisters. All the photos will enlarge if you click on them. 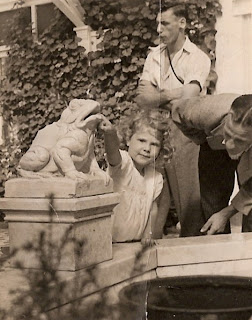 We weren't a family who took photos on the whole, the first camera we ever had was the Brownie box camera that I had as a present for my thirteenth birthday. The very few photos that exist of my dad with me when I was small are so tiny that you can hardly see either of us. This one was taken in the Isle of Man when I was about 3 years old. The chap in the back ground is a total stranger! My dad is the chap bending over me. He was 35 when I was born so he'd be around 38 here in 1949. As always his hair was well Brylcreemed into place - there was always a jar of Brylcreem in the bathroom:) 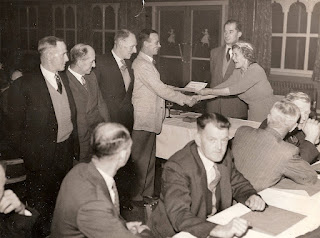 He worked on the railway as a platelayer and was Ganger to his little team of men. They looked after a lovely country stretch of line at High Lane in Cheshire - long gone now. Sometimes in the summer he'd take me to work with him and I'd walk the length with him as he checked it and then I played house in the little trackside hut while the men did their work. Can you imagine that happening now?! That was where I first saw stoats, weasels and the peewit - that was what my Dad called the lovely black and white birds that we saw so often, I was in my 20s before I discovered that their proper name was Lapwing:) Dad and his gang often won the prize for the best kept length and this photo shows them being presented with a certificate - I would guess that this is late 1950s. 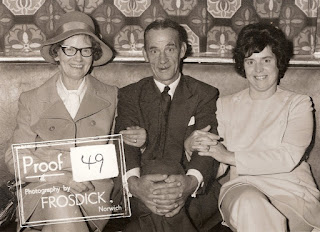 The next two photos were taken at my cousin Sheila's wedding in 1970, here he is with my mum on the left and my Aunty May on the right. May was the wife of my Uncle John and a real favourite of my Dad's:) 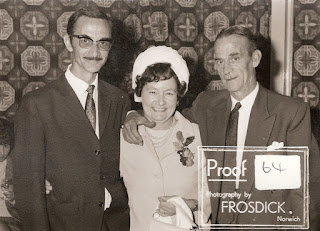 In this photo he's with his brother John and his sister May. John and May are still alive, Uncle John will be 82 this year and Aunty May will be 92. And yes, the other Aunty May is still with us as well, she's 79 now. 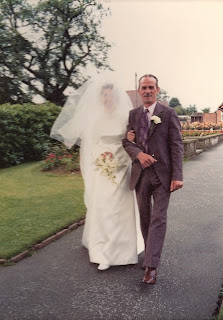 This is August 1st 1972 and my Dad and I are are arriving at the church on my wedding day. 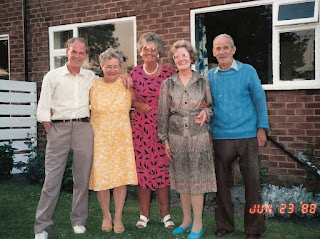 This is one of the last photos I have of my Dad, it was taken in June 1988 in the back garden, the three ladies are Aunty May, another of my Dad's sisters Aunty Lilian and my Mum. On the left is my Uncle Vic, Aunty May's husband. Dad died on January 25th 1989 at the age of 76. 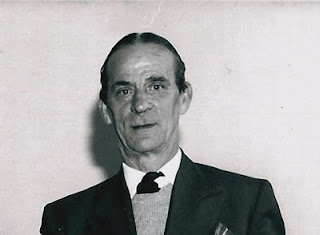 I could have written some of this D.
I only have two photos of my Dad. One as a young Soldier in his Royal Artillery uniform when he went to France during the WW1 and the second in his Home Guard uniform towards the end of WW2. My big Sister when a young woman was the first to have a camera in our family and it was a Box Brownie which I think she still has.

What a wonderful post Rowan! Your Dad looks like a happy and fun loving man. I loved seeing all of your photos!

A beautiful tribute to your father.
I so enjoyed reading some of your family history.
You obviously loved your father very much.

The images took me back to another place and time....I so enjoyed reading about you walking the track and playing in the hut.
The Lapwing story also brought a smile.....so very charming :)

This is a beautiful post Rowan. I love all of the photos. You are very much like your mum. I always called Lapwings Peewits too and only recently discovered their real name. xxxxx

A lovely post for your father's hundredth birthday. He seems a quiet, gentle man. I did find it surprising that you have no early photos of your dad. My father was born in 1908 in the rugged Appalachians mountains of eastern-Kentucky…in many ways an isolated, rural place out of time, practically unchanged from a century before. Even so, I have several photos of him as an infant and boy—which, of course, I treasure.

Anyway, I enjoyed your piece. (BTW, tried to post a comment a couple of hours ago, but couldn't get it to go. If you do somehow receive it, just discard.)

Lovely memories and a fine tribute to your father. I have an old bird book which states that Green Plover is the correct name and scorns both Lapwing and Peewit. It also favours Hedge Accentor and Yellow Bunting rather than Dunnock and Yellowhammer. Fashions change. So three cheers for your dad, the kind of man who decides what his hairstyle is in his youth then sticks with it for the rest of his life! Bravo!

A beautiful post - thank you for sharing your very special photos with us. Best wishes, Pj x

Wonderful post Rowan, I love the photos. I have no photos of my Dad taken before he met my mother. I'd love to know what he looked like. What pride our parents use to take in the work they did, it wasn't just a job, it was an extension of themself and they took pride in it.

A lovely post Rowan, your dad would have been so pleased. I too don't have any early photos of my dad except the one on my sidebar. You do look very much like your mum.

Your dad was 10 years older than my dad, who will be 90 on his birthday this August. Dads are special. Yours looks so very proud walking his daughter in to her wedding. What a nice tribute you've written to him. Sad that he was so young when you lost him. We wish we could keep them forever and ever, but alas, time steals them from us.

Very nice tribute. I especially enjoyed the 2 wedding photos, your mom and dad's, and yours. I have one of my dad walking me down the aisle that I treasure.

PS That little girl with her hand in the frog's mouth is adorable!

How lovely to remember your Dad in this way, a great tribute post.

Your dad looked a lovely man and obviously taught you about nature. John's' comment about his hairstyle made me smile - my mum was just the same - just like the Queen's when she came to the throne, and never changed it : )

Those old photos hold so many memories don't they?
Brylcreme! yes! and antimacassas to keep it off the chair backs!
I still call them Peewits (it's in the Observer's Book of Birds!).

Wonderful pictures !! You have a beautiful family !!
It's nice that both the aunty May's are still here.
Have a wonderful day.

What a lovely post, Rowan. I too only have photos of my father when he was older. He was born in 1909 and was 41 when I was born and 45 when he died so I have very few memories of him. We always used to call lapwings peewits, too:)

Rowan, I have awarded you the Leibster Award. You can read all about it over on my blog.

A fine remembrance of your Dad, Rowan. The bridal picture is wonderful to have.

Nice post about the first man we all fall in love with for the first time, right?
Thanks for sharing.

Thank you for visiting my blog Rowan and following me. I am now following you. Nice to meet you.
~Clara

A lovely and very moving tribute to your Dad. I love the image of you going to work with him and playing alongside him as he worked on the track.

We called them peewits too!

This is a lovely tribute to your dad. I have a feeling that he worked somewhere near here? We still have our railway and even a direct line to Euston but so many lines were lost.

It is hard to imagine Health and Safely officers allowing a child so close to danger. I used to accompany my dad sometimes, he worked in a paper factory. He also introduced me to so many things, birds , flowers, books and he wore Brillcream especially whilst on holiday in the Isle of Man!

What a beautiful post, Rowan. I loved seeing all the photos. Your words are wonderful. Thank you!

What a wonderful tribute to your Dad, Rowan. I loved the old photos too. I can easily get lost for hours in my box of old photos spanning many years...

A beautiful tribute to your Father. I enjoyed looking over your family photos. Photos, precious forever.
Hugs Rosemary...xx

A wonderful, wonderful piece on your father. I so enjoyed reading it.

What a lovely tribute to yoir dad! :-) The first pic of his wedding is stunning, I love old photos!!
Bella

I just posted a similar blog entry today. What a lovely tribute to your father. I feel like I was privileged to meet him through this.

Happy birthday to your dad!