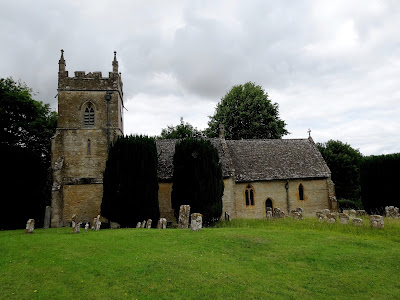 Many people who visit the Cotswolds head for the well known places such as Stow-on-the-Wold, Bourton-on-the-Water and Broadway -  all very nice in their way but much too crowded for us. Though I have to say that Broadway has the most wonderful delicatessen - we bought various delicious things there and had them as a picnic lunch later on:) However we soon moved on to the delightful villages of Upper and Lower Slaughter. Above is the 12th century church of St Peter in Upper Slaughter. It's a pity that the day was rather cloudy so the photo is rather dreary looking especially with the two yew trees at the front of the church. This is an entirely false impression as the church and the village are both very attractive. There are an awful lot of people buried in that churchyard, apparently it stands six feet higher than the church itself! 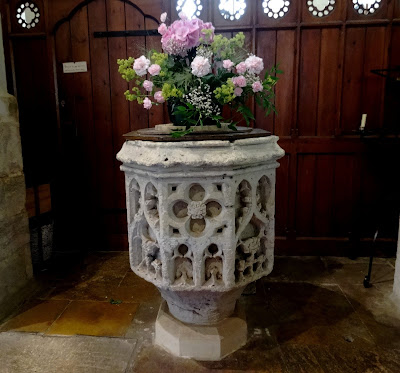 This is the lovely 14th century font made even nicer by the flower arrangement standing on the font cover. 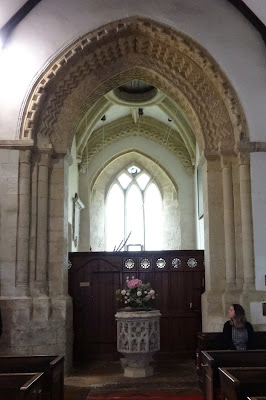 The font stands below the Norman archway at the western end of the church which forms the entrance to the church tower. 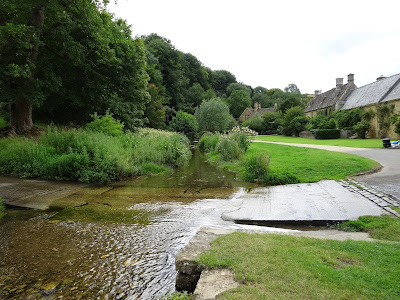 A walk down the lane that runs by the side of the church brings you to the pretty little ford crossing the River Eye. This joins with another small river further down and eventually runs into the River Windrush at Bourton-on-the-Water. There is a small stone footbridge over the river as well. One thing you won't find in Upper Slaughter is a war memorial. It is one of only fourteen villages in England and Wales where every one of the soldiers who went to fight in the two World Wars returned safely, 25 in WW1 and 36 in WW2. 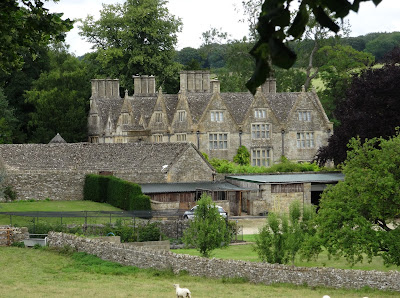 On the way to Lower Slaughter we passed this beautiful Elizabethan manor house - Upper Slaughter Manor.. 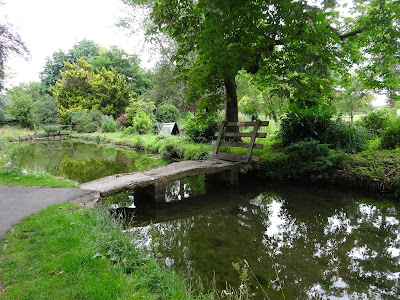 The River Eye runs through Lower Slaughter as well and there are several of these stone slab bridges crossing it. It's a lovely village and although there were a few more visitors here than in Upper Slaughter it was still quiet and peaceful. The name Slaughter actually has nothing to do with killing anything - it derives from the Old English word 'sloughtre' which means a muddy place. The level of the river is so near the level of the road in both villages that I can well believe that it in past centuries it was very muddy indeed in winter. And probably in spring and autumn too! 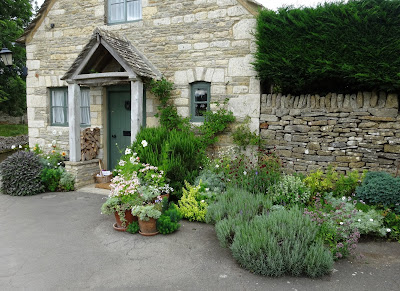 I loved this tiny front garden, it makes the most of every bit of space and everything blends beautifully. 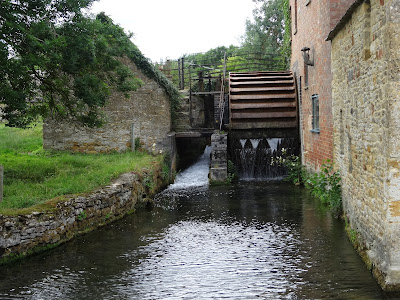 This 19th century mill with its restored water wheel was still working until 1958. The mill house now houses a tea room, small museum and gift shop. It took us about 30 seconds to decide it wasn't our kind of place:) The words 'tourist trap' spring to mind! We, of course, are not tourists but travellers:)
Posted by Rowan at Wednesday, August 26, 2015

Your posts, I must say, are so inspiring. There is so much beauty here and so much calmness and rest which speaks to my very soul.

What a pretty place! I've done a few bits of the Cotswolds (My first inlaws lived in Broadway!) but never actually been to the Slaughters. I'm very fond of Bourton on the Water and have very fond memories of the model village from my childhood.

Two lovely villages. It's so much better to get off the tourist trail and see something different although the water mill looks lovely from the outside I guess it was quite busy and commercial inside and the prices for tea would reflect that:)

Very quickly catching up with your posts, but delighted to see you blogging again. Enjoyed reading about Amelia.

It's a lovely part of the country with many interesting nooks and crannies away from the "honey-pots". Back in the days when I used to lead mountain walking holidays I was asked if I would mind leading some low-level walks in the Cotswolds. Somehow I managed to get lost in Bourton-On-The-Water - every time I hear the name of that place I'm filled with embarrassment!

Such pretty villages in the Cotswolds. There used to be a TV advert in the 60's about 'trying your brakes' after driving through the water!

What a shame you didn't let me know when you were visiting the Slaughters, Rowan - our farm is just outside Upper on the way to Lower Swell! The Manor House at Upper is still privately owned and was once the home of the Slaughter family who were the original Lords of the Manor. The hotel of the same name was originally the rectory, home to Rev Witts, who took over the role of Lord of the Manor in the early 19th century after the Slaughter family had all gone to the US. His diaries of life at that time are fascinating. The next rectory is the house at the end of the drive in your photo by the ford. I used to teach the adopted daughter of the owners piano when I was 17. The rectory is now in Lower Slaughter and the female incumbent is Rural Dean. The rector for Upper lives in Bourton. She took my mother's funeral and her little sister was my first piano pupil! Small world.

How wonderful....through your great pics, I feel as if I am there. Has been years since I have been across the Pond....Thank you so much.

Thanks for the information Sarah - I've amended the text under the photo. You are so fortunate to have the farm in such a beautiful place. What a coincidence about Childswickham - maybe we are related:) Probably not though as I doubt that my family had the money for memorials and headstones!

You've certainly been visiting some of our favorite places. Mac has done several drawings of the church at Upper Slaughter, one of his favorites and I've sat on painted by the ford. Love your photos.

Reading your post here bought back many happy memories of time spent in the Cotwolds many years ago ... thank you.

I used to pass through Upper Slaughter quite often and really these Cotswold villages are just lovely. A pity that the tea room doesn't keep the mill wheel working. I know it's expensive but surely that is the point of the place. In Boston in Lincs there is a place called the Maud Foster windmill which grins the flour for the fantastic cakes etc. that the shop sells. Do recommend a visit if you are in that part of the world.