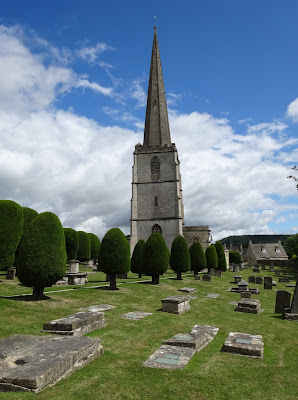 By the time we arrived in Painswick the sun was finally shining for the first time since we left home.I haven't been to Painswick for several years and it struck me as being much quieter with fewer shops than on my previous visit. Certainly we had no problem finding a space in the car park. St Mary's church is renowned for its yew trees - ninety nine of them were planted in the early 18th century and there was a legend that if a hundredth one was planted then the Devil would pull it out. I gather that there are now one hundred and three so draw your own conclusions:) The churchyard is also famous for its many table tombs belonging to the clothiers and merchants of the area who became wealthy as a result of the thriving Cotswold wool trade. In the 15th century when the Lord Chancellor's seat was created in the House of Lords it was made of Cotswold wool and became known as the Woolsack and the name continues to the present day. 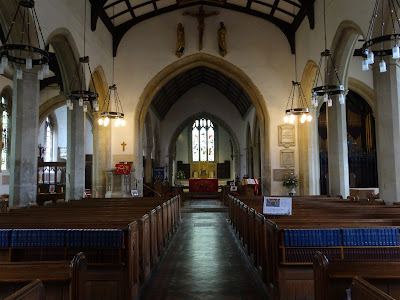 The 15th century nave of St Mary's. The original Norman church is mentioned in the Domesday book but nothing is left of it now. 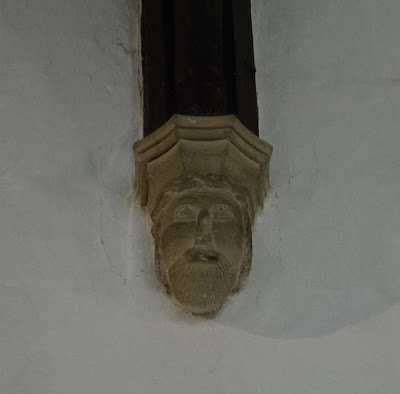 The north aisle which you can just see on the left of the previous photo was built in the reign of Richard II who was king from 1377-1399 and on two of the stone corbels are carved heads of Richard (above) and his Queen Anne of Bohemia. 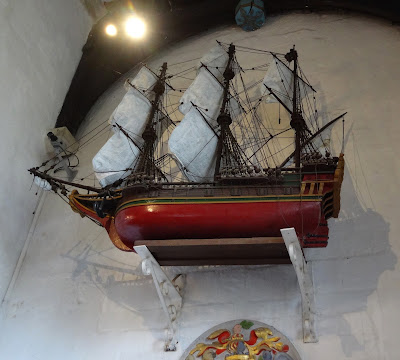 My favourite thing in this church was the wonderful model of the 'Bonaventure' the flagship of Sir Francis Drake when he saw off the attempted invasion of England by the Spanish Armada in 1588. I believe that it replaces a much older model which was badly damaged during the Civil War when Royalist soldiers threw hand grenades through the church windows to drive out the Roundhead soldiers who were sheltering inside. 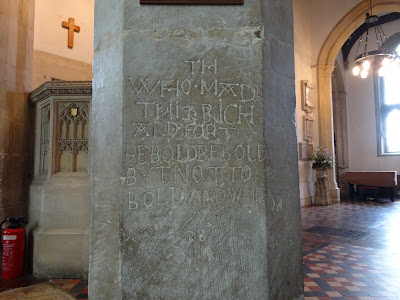 In 1643 a Puritan soldier passed his time while imprisoned in the church by carving this graffiti on one of the stone pillars in the nave! It included a rough quote from Edmund Spenser's 'Faerie Queene' - Be Bold, Be Bold, But Not To Bold. The spelling mistake is his not mine:) 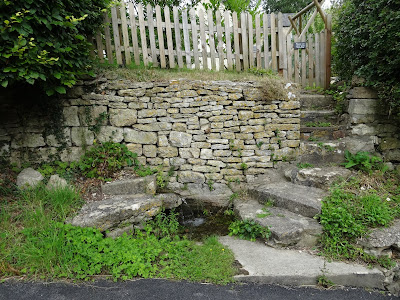 By this time it was early afternoon and we were hungry so we looked for somewhere to have a spot of lunch, Juliette spotted a little cafe called 'The Patchwork Mouse' so we went in there and had an excellent toasted sandwich and a cake. Afterwards we had a stroll round Painswick but I don't seem to have taken any photographs for some reason. I don't know why as there were a lot of lovely Cotswold stone houses and cottages. Before we left I wanted to go and see if we could find Tibby's Well which was down a long and very steep lane. It was once the main source of drinking water for the village and is rather attractive. The climb back up the lane was just the thing to work off lunch! 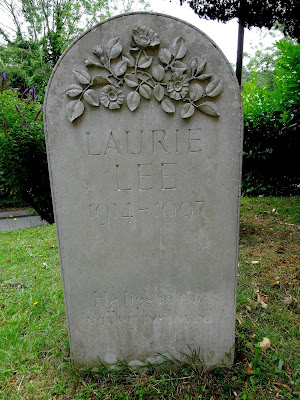 Not far from Painswick is the village of Slad. We wanted to see the place made famous by Laurie Lee's book 'Cider With Rosie'. It tells of his childhood in a remote Cotswold village in the early years of the 20th century - he was born in 1914 and came to Slad at the age of three. Although he eventually left the village at the age of 19 he returned to Slad in his later years and is buried in the churchyard more less opposite the Woolpack Inn where he apparently spent a lot of his time! The inscription at the bottom of the headstone reads 'He lies in the valley he loved'. Incidentally the name of the village comes from the Old English word 'slaed' which means a damp valley - it's well named I think. 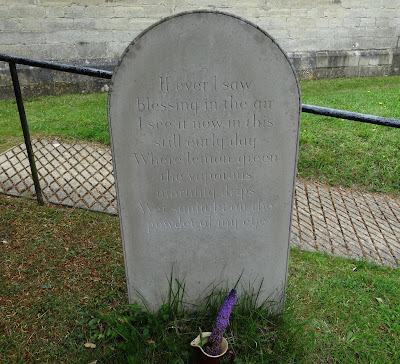 If ever I saw blessing in the air
I see it now in this still early day
Where lemon-green the vaporous morning drips
Wet sunlight on the powder of my eye. 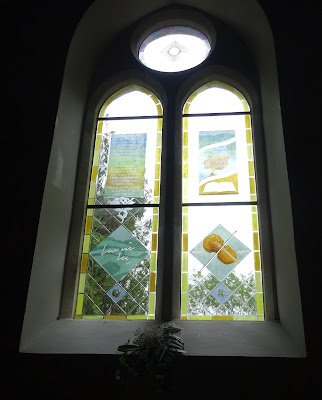 This is the memorial window to Laurie Lee in the church, it isn't a very good photo but it was the best I could manage. The church was very dark and there was quite strong light outside. It's a shame as it's a very attractive window. The violin is in one of the panels because as well as being a poet and writer he was a talented fiddle player and he earned money in both London and Spain by playing his violin after leaving home in 1934. 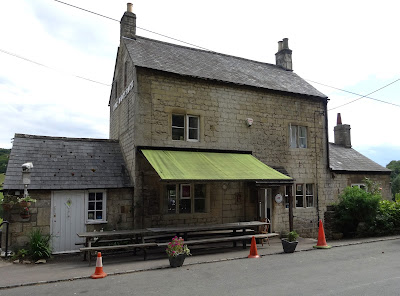 The 16th century Woolpack Inn which is still an unspoilt country pub, it's a pity we didn't arrive in Slad a bit earlier because we could have had some lunch here. Apparently the food is very good. We didn't go inside but I wish now that we had. Laurie Lee lived very near to the Woolpack and spent a lot of time in here:) 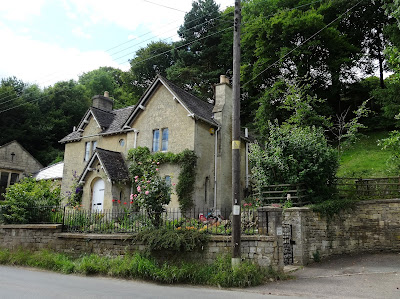 The Old School House is across the road from the Woolpack and this is where Laurie went to school in his early years before moving on to Central Boy's School in Stroud when he was twelve years old. It's a private house now of course, so many of the old village schools no longer exist. I would really like to go back and spend several hours in Slad as there is what looks like a lovely and interesting four mile walk around the area which is still idyllic. By now it was quite late in the afternoon and we needed to start heading back to Evesham but instead of taking the main road we went across country along narrow winding lanes that went on for miles and were literally just the width of our car. I don't know what would have happened if we'd met something coming the other way as passing places were pretty much non existent. 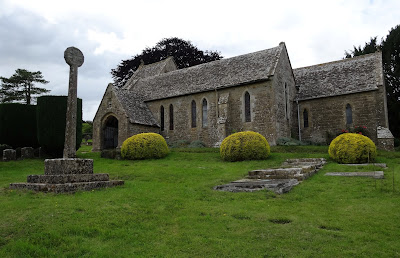 Eventually we came to the attractive little village of Duntisbourne Abbots with its simple but beautiful 12th century church. I had a particular reason for wanting to stop here. 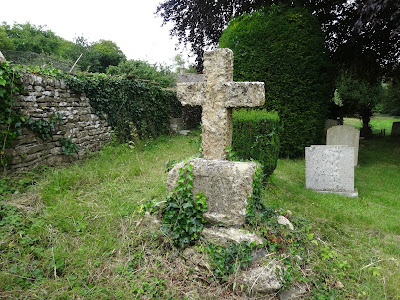 We had with us an old guide book to the Cotswolds and in a small paragraph about Duntisbourne Abbots it said that in 1875 the villagers had disturbed the neolithic Jack Barrow when ploughing and had reinterred the bones they found in the churchyard. They marked the spot with a cross made from stone of the original barrow megaliths. It didn't say where the grave was but I found it quite quickly by just looking round for stone that looked different from the rest of the gravestones in the churchyard. 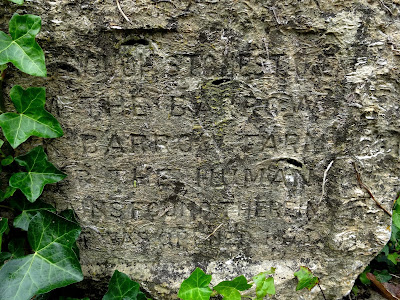 Proof that I'd found the right grave from the  worn but still fairly legible inscription. 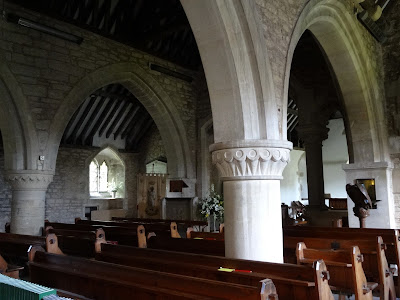 Much of the original Norman church is still there in spite of some restoration in Victorian times. I should perhaps say here that my daughter's enthusiasm for visiting churches is very minimal indeed and my interest in them is purely because in general that is where the history of most places is to be found. She is kind enough to indulge me in this:) 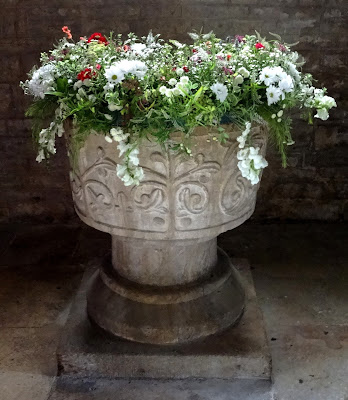 The final photograph is of the late Norman font beautifully decorated with flowers. We think that there might have been a recent wedding and that was why the flowers were there. This font must have been here for nearly 900 years. There are so many lovely places  in the Cotswolds to visit or revisit. I feel sure we shall be returning for a few more days next year.
Posted by Rowan at Wednesday, September 02, 2015

We stayed near Painswick years ago, I remember them having a number of bookstores that we spent some time in.
Didn't know about the connection to Laurie Lee, Mac has read Cider with Rosie and some of his other books.

I read that Laurie Lee book many years ago, and remember thoroughly enjoying it. Also "As l walked out one Mid-Summer Morning" (about the Spanish civil war I think) I must read them again!
This is where my paternal ancestors sprang from, Glos. and Worcs. going back for several centuries. It is so pretty there. I loved seeing your photos, thank you.

I read Cider with Rosie years ago, now I feel I must read it again.

What lovely places you find to visit Rowan! Thanks for taking us along with you.

Such lovely places,the flowers in the font look so pretty. I remember reading Cider with Rosie years ago and still have the book on my shelves. This Rosie had a glass of pear cider with her meal last evening:)

What a great tour! There are some lovely places on it. Are all the churches open to the public, or do you have to go key hunting to see them all?

All the churches that we visited in the Cotswolds were were open. I find the same is true of Suffolk and Norfolk but it isn't the case everywhere unfortunately.

The church interiors are lovely and so grand.

All your pictures make me realize the wonderful history you have. I know you must enjoy your visits. Thanks for sharing them with us.

Like you, I love revisiting places. More than seeing new places I think! Anyway I could travel endlessly in England, not that we have done that much. You have taken wonderful photos! Thanks so much for the good word on my blog!

Such a lovely post Rowan - photos and commentary on your visit to many interesting historic places is, as always, like coming home for a visit. Thank you.
Mary -

Painswick is lovely isn't it? I went there about 3 years ago with my friend from Ross-on-Wye but I don't think we went in the church.

A fascinating post, and I loved hearing about the Neolithic Jack Barrow re-interment.

Jude took me to Slad too, and we visited Laurie Lee's grave. What a beautiful poem on the back. A lovely valley.

I think they are showing a new dramatization of Cider with Rosie this autumn. I have the book (the illustrated one which was one of a number of such illustrated styles of popular books) and must re-read it.

That headstone, how true the words.

Wonderful...how I drink in all that amazing history...

What a lovely day out! I've never read Cider with Rosie (shamefully!) but it one I keep meaning to read!