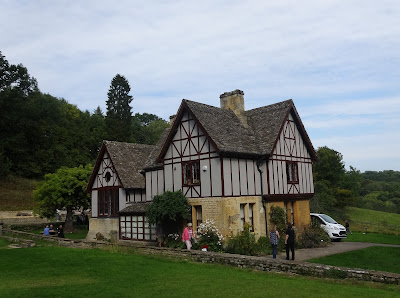 Last weekend a group of us from the Time Travellers, our local archaeology group, went down to the Cotswolds for our annual weekend away visiting sites of historic and/or archaeological interest. The photograph above might give the impression that we were at a fairly modern site but that is far from being the case. In 1864 a gamekeeper discovered pieces of Roman tesserae on land belonging to Lord Eldon. At the time Lord Eldon was a minor and it was his uncle and guardian James Farrar, who fortunately had an interest in antiquity, who organized a team of workmen to excavate the site which turned out to be Chedworth Roman Villa. When Lord Eldon eventually came of age ( in 1866) he also was interested in the villa  and carried on with the conservation work that his uncle had begun. This is the Victorian shooting lodge and museum which he built on the lower part of the villa site. Chedworth Roman Villa was acquired by the National Trust in 1924. 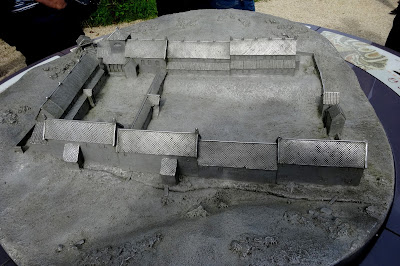 A model of the villa showing the layout as it would have been in the fourth century AD. To the left is the west range containing the main dining room and the bath house, at the top is the north range and nearest the front is the south range . No-one has been able to work out exactly what the various rooms were used for but the south range certainly contained the kitchen and the latrine suggesting that this was at least in part a service wing. 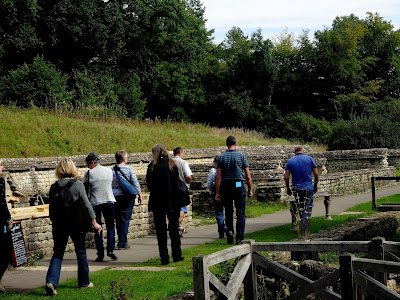 Here we are beginning the tour with our guide who was a retired forensic archaeologist. He was brought in specially for us as it was assumed - not necessarily correctly:) - that we all knew more about what we were seeing than the general run of visitors. As well as the enthusiasts there were one or two wives in the party who were just along for the ride rather than because they had any real interest in archaeology.  In my case the assumption was correct though as I did Classical Studies 'A' Level many moons ago and Chedworth was one of the Romano British villas that I studied. We are walking along the front of the north range which  faces south so the main reception rooms would be along here including what is thought to be the summer dining room which would have taken advantage of the sunlight and the  lovely view in the warmer months.The climate in Britain was much better during the Roman period than it is now. 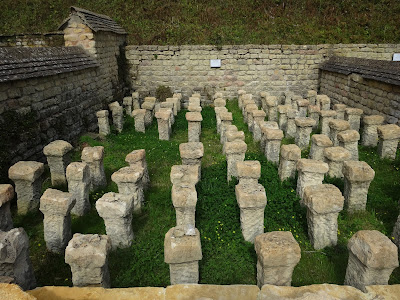 Pillars of the underfloor heating system in a room labelled cautiously 'Multi purpose heated room' which translates as 'we have absolutely no idea what this room was used for' :):) 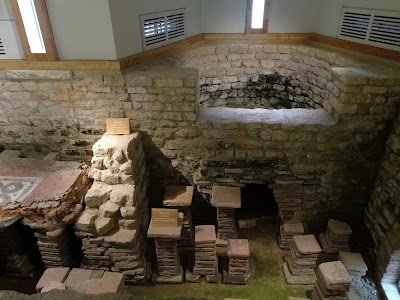 This is part of the bath house which shows both the proper floor level on the left in the tepidarium or warm room and also the pilae which supported the floor of the caldarium or hot room. At the back is the semi circular hot tub. Outside the wall on the right was a furnace and the hot air entered through the opening that is just visible at the bottom right. It was circulated under the floor through the open spaces between the pilae.The hot room was nearest the furnace so was hottest, it had cooled down somewhat by the time it reached the warm room and I think there would also be a hypercaust under the changing room which would be third in line and so just comfortable. 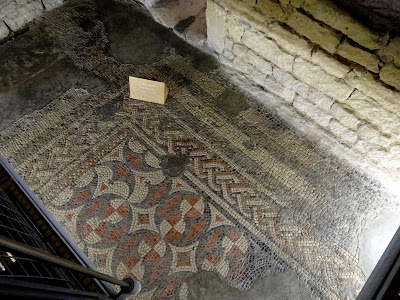 All the rooms in the bath house would have had mosaic floors, this is the frigidarium or cold room. Bathing was a very important part of Roman life and was quite a prolonged and complicated affair. You would go into the baths and undress in the changing room before going into the cold room. I wouldn't imagine you would linger there too long before moving on to the warm room for a while. Then it's on to the hot room where there was a boiler or basins filled with hot water to provide steam and you could sit in the hot tub if you wanted.The steam opened the pores and released the dirt and then it was back to the warm room where you would have a massage with scented oils and then all the oil and dirt etc would be removed using a strigil. Back to the cold room for a dip in the cold plunge bath before returning to the changing room feeling clean and refreshed. This would have been a daily ritual not something you did once a week or once a month or - as happened in later centuries - once a year! 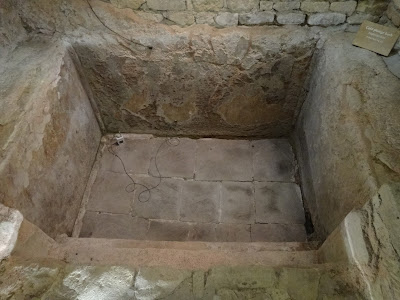 This is the cold plunge bath. 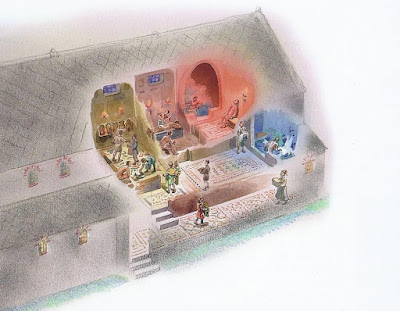 I scanned the really neat little sketch from the National Trust's excellent guide book to Chedworth Roman Villa which will help you follow what I've written about bathing. All the odd bods trotting about are the slaves who would assist you when required - folding your clothes, fetching towels, doing the massage and wielding the strigil. 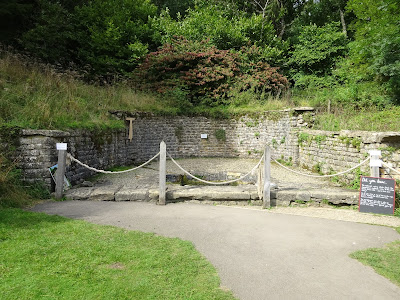 In the north west corner behind the villa is a nymphaeum - a shrine built over a natural spring which was channelled into an octagonal basin, This was a religious site where a water goddess would have been worshipped  but also from here came the water supply for the villa. Since traces of iron age round houses and an iron age burial of a child have been found nearby it is almost certain that the spring will already have had a native British goddess who would have been combined with a Roman equivalent. I should perhaps say here that the family who lived in this villa will have been wealthy Romano-Britons not Romans. Very few 'Romans' ever lived in Britain, the administration was largely carried out by Romanized high ranking Britons and the military men came from all parts of the Roman Empire. After 25 years service a soldier would gain Roman citizenship and a parcel of land and might well settle permanently here. You can also banish any visions of chaps wandering about wearing togas, only Roman citizens were allowed to wear togas and as they were distinctly cumbersome even those who were entitled to wear them probably only did so on formal occasions. 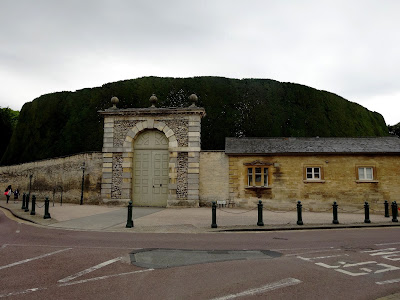 By the time we left Chedworth it was quite late in the afternoon so the four of us who were travelling together decided to visit Cirencester as it was close by. Cirencester was once known as Corinium Dobonnorum and was the second largest town in Roman Britain. The second part of the name comes from the Dobunni who were the local British tribe. The photo shows the fantastic yew hedge in Bathurst Park which is the family seat of the \earls of Bathurst. We knew that we didn't have much time but decided to have a quick look in the Corinium Museum which has a large collection of Roman antiquities. 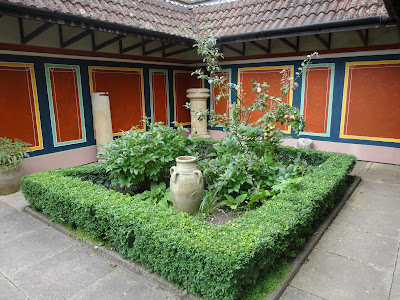 Among the exhibits is a recreation of a Roman garden which was full of familiar plants - borage, myrtle, bay, roses, lilies, cyclamen and many others most of which were introduced to this country by the Romans. 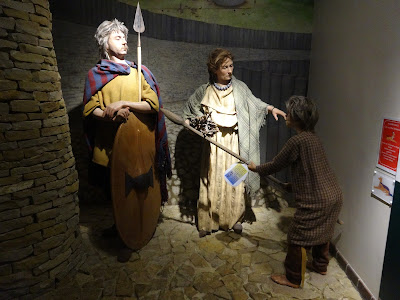 Members of the Dobunni tribe - Corinium was their tribal capital which had evolved from the vicus or settlement that grew up around the 1st century Roman fort that was built here. The garrison was transferred elsewhere by 75AD. 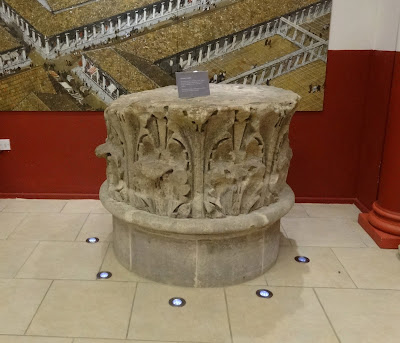 This is the lower half of a Corinthian column capital - the largest ever found in Britain. It came from the site of the Basilica in Corinium and the column that it stood on would have been 13 metres high. 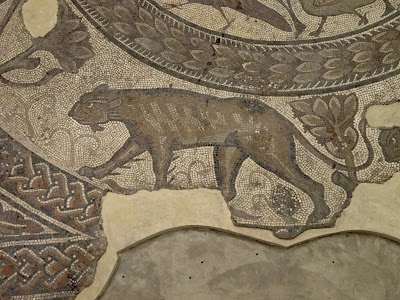 Part of the 4th century Orpheus mosaic that was discovered just outside the centre of Cirencester. There's quite a lot more of the mosaic left and the portrayal of the animals is really appealing. One day I shall go back to this museum, we only had 45 minutes before it closed and it deserved a far longer visit than that. It's one of the best museums that I've visited - light, spacious, beautifully laid out and the information about the exhibits was both clear and interesting. Cirencester itself would be worth exploring as well I suspect. A town as old as this must have a lot of history. 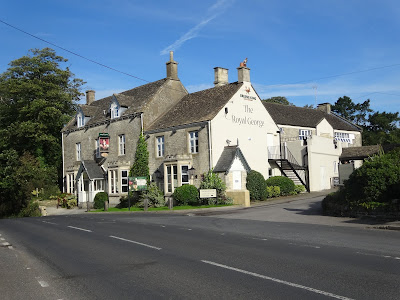 So off we went to our hotel in Birdlip, the rooms were not especially wonderful - no shampoo or shower gel for a start! The bed was comfortable though and the food was truly excellent - the salted caramel tart I had on Saturday night was heaven on a plate:)
Posted by Rowan at Wednesday, September 16, 2015

Chedworth we've visited, had our rental car broken into there, enjoyed the villa anyway. The other museum I'm not familiar with at all, but it definitely looks worth a visit.

Fascinating stuff, though I was rather overloaded with Roman history at school and never seemed to recover from it! Good food makes even the most basic lodgings seem much better.

It's years since I went to Chedworth, though I had a brief visit to Cirencester last year. There's an amphitheatre close to the centre of town. It is worth another visit. (I didn't have enough time to do the museum either!)

Years since I visit Chedworth too, I think it was the mid to late 70s so I guess much has changed there. I seem to remember visiting the Museum at Cirencester a few years later but at the moment I can't remember it so it is nice to see your photos. It sounds as if the food made up for the standard of the rooms in your hotel and at least the bed was comfortable, looks like you had an interesting weekend:)

I wouldn't like to live behind such a yew hedge but I'd quite like a few slaves to sort my clothes for me. Re. underfloor heating. The idea has always seemed luxurious and I suppose it worked because it was so widely used - but . . . I wonder how much heat simply couldn't get through to the room above.

Your pictures are wonderful, as always.

Your posts are full of such rich history and information. Truly enjoyable!

How interesting! I love history and England so obviously I love to read your posts...

What an interesting trip, another place to add to the list of places to go! Especially interesting for us, as we just finished looking at the Romans in Britain. x