Berlin - A Food Tour, Some Street Art, A Light Show And The Berlin Wall - Part Two 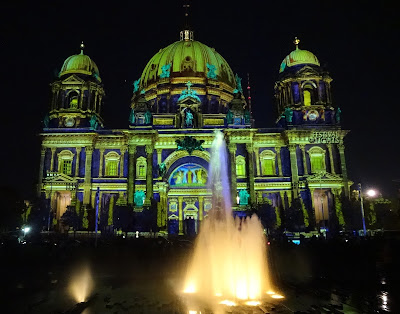 Once we had eaten we decided to stroll over the bridge to the other side of the river and see what this Festival of Lights was all about - Bastien had just said that some of the main buildings were illuminated. The Festival takes place every October and turned out to be a lot more spectacular than we expected! I have to say that my photographs don't begin to do it justice. Above is the Berliner Dom which is the first building we came to, it wasn't just a static affair as we'd been expecting but a constantly changing art show achieved with video and lasers. Many of the world's leading lighting artists take part in the festival. 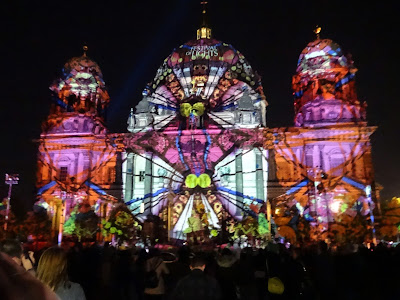 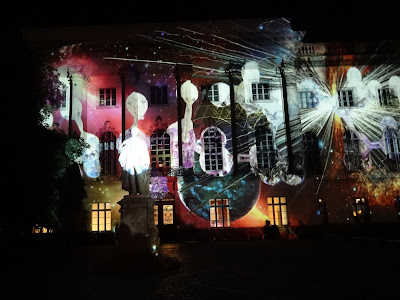 This is the front of Humboldt University - you can just see the statue of Hermann von Helmholz who was a famous German physician and physicist who was Professor of Physics at the University in the 19th Century. Humboldt is a very prestigious University, Albert Einstein was a professor here and it has produced twenty nine Nobel Prize winners. 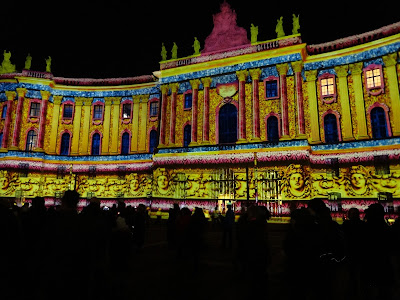 The Altes Bibliotek in Bebelplatz just across the road from the University. 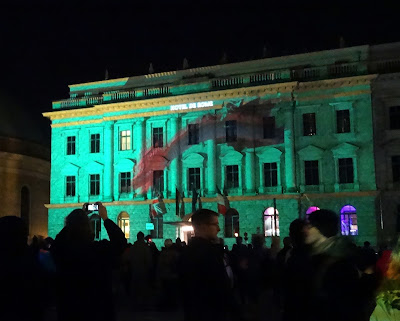 I wish I could have got a better photograph of this,it was fantastic - the dragon appeared through a window then seemed to fly across the front of the building and in through another window. It happened so quickly each time it was impossible to catch the whole dragon in one photo. 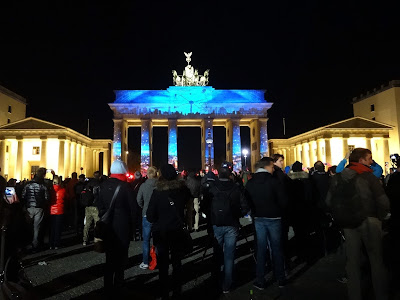 At the end of Unter den Linden of course was the Brandenberg Gate. Like all the other buildings and monuments this had constantly changing images. There were literally thousands of people out on the streets but the atmosphere was always friendly and happy. 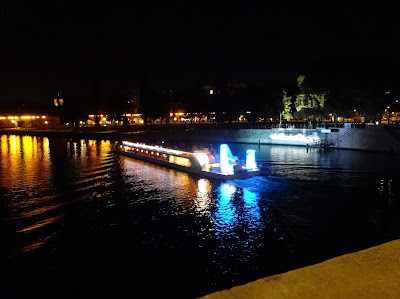 As we walked back over the bridge we saw this illuminated boat sailing along the river. The whole thing was a really enjoyable experience and if Bastien hadn't mentioned it to us we'd have missed it altogether. 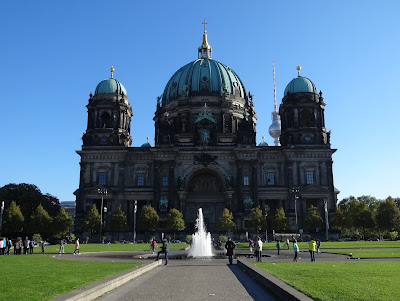 Our final day in Berlin was bright and sunny and as our return flight wasn't until early evening we were able to spend several more hours looking round. We wanted to go back and have a proper look at the site of the Berlin Wall among other things. After an early breakfast we left our luggage at the hotel and once more crossed the river and walked down Unter den Linden. 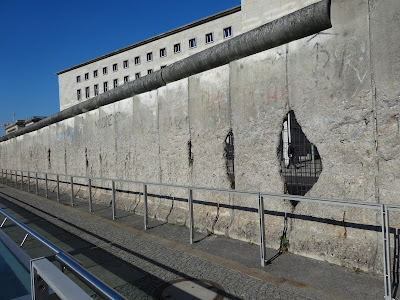 This is the longest section of the Berlin Wall that is still standing. I'm old enough to remember the Wall both being built and being pulled down. I was a young teenager of 15 when it was built in 1961 and 43 when it was finally demolished in 1989. After the end of WW2 the city of Berlin was divided into four sectors each controlled by one of the four occupying powers. The Wall was built by the government of the German Democratic Republic to separate the British, American and French sectors of Berlin from the Communist controlled Soviet sector. 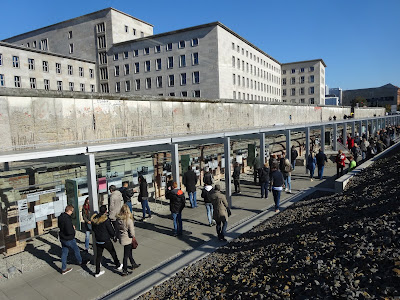 Directly in front of the Berlin Wall are the cellars that lay below the Gestapo and SS Headquarters between 1933 and 1945. The buildings at street level were destroyed by bombing but the remains of the cellars now house an open air exhibition giving an overview of the historic location and the site’s use during the Nazi period and the postwar era. 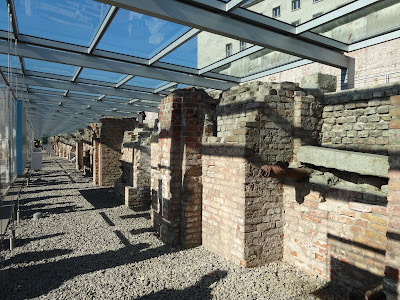 These are the remains of the cellars which have been excavated - I dread to think what appalling things happened here in the past. It's rather a chilling experience to walk along here even with the blue skies and sunshine. 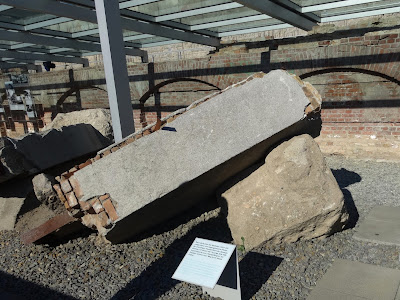 The demolished and abandoned piers with remnants of the metal fittings from the main driveway to Gestapo Headquarters were left in place when the site was cleared between 1957 and 1963. All prisoners destined for the Gestapo 'house prison' passed through here.The 'house prison' was where prisoners were brought for 'interrogation'. 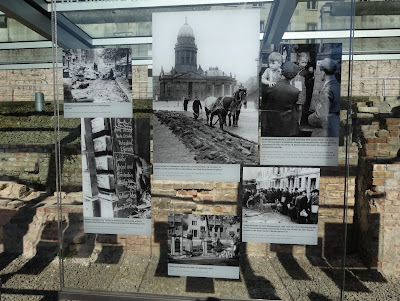 One of the information boards from the exhibition, the explanations below the photographs are given in both German and English. The horses are ploughing in Gendarmenmarkt where the Konzerthaus stands and where we had finished our guided walking tour a couple of days earlier. 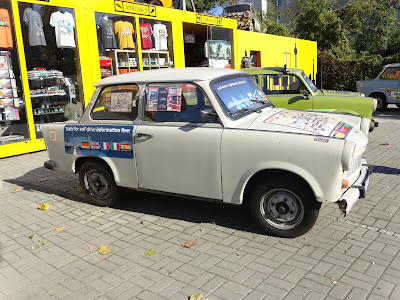 On a lighter note here we have the Trabi which was the most common car in East Germany during the Cold War and apparently they are now quite collectible. Production began in 1957 and it was produced for the next 30 years with virtually no changes. With its two stroke engine it wasn't exactly a racing model:) It's possible to go on a Trabi-Safari of Berlin which might be rather fun I think. 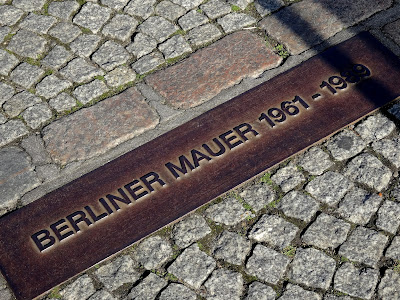 The 'Berliner Mauer' plaques are set into the ground at intervals and mark where the Berlin Wall once stood. 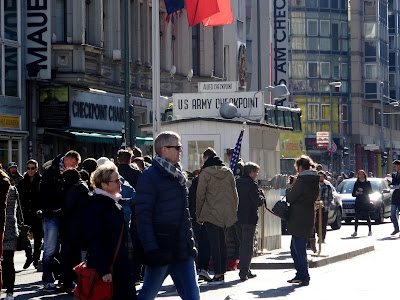 Finally the infamous Checkpoint Charliewhich is a replica of the original guardhouse which is now in the Allied Museum. I would love to go back to Berlin, there is so much to see and do and we barely scratched the surface during our 4 days there. I want to see the head of Nefertiti for a start!
Posted by Rowan at Tuesday, May 31, 2016

I've enjoyed your posts on Berlin, Rowan, especially the photos. Berlin is one of the few major European cities I've never visited. Hopefully, I'll get there soon. Hope all is well with you and your family.

I'm like you Rowan, I remember the wall going up and coming down. Can't wait to see Berlin, it's been a very long time.

That light show looks brilliant! It was interesting to see some of Berlin too. Glad I'm not the only one who didn't enjoy The Old Straight Track. Hope you're enjoying Meadowland - I read that a couple of months ago and really like it.

The Festival of Lights looks amazing. Another one here who can remember the wall being built and coming down. I was 11 when it was built and I remember watching it being demolished on television:)

I haven't seen the head of Nefertiti in Berlin either! I loved reading your description. It's one of my favourite cities and I do want to return yet again before too long. I love son et lumiere shows, or whatever they call them in German. It must be such fun to design exactly the right kind of film or pattern to project on a particular building. Earlier this year I had a great time in the Lumiere festival in London.

I, too, am of an age to remember the wall being built and being torn down. I spent three years in West Berlin in the USAF, where we lived in the Tempelhof Airport building. When I first came there, Tempelhof was the only working airport in the city, but while I was there, Tegel was finished, which is where you probably flew in. I flew into Tempelhof when I reported for duty. After 17 hours on the plane from Texas, I was a little startled to see sheep on the area in between the taxiway and the runway. A bit scary to land right in the middle of the city.

What a light show! They did one like that for West Virginia's 150th birthday, lighting up the Capitol building. It was brilliant! Now you have me wanting to see Berlin--I never considered it before but there seems to be much to see.

Wow - this is a very interesting post - loved the light shows and the info about Humboldt University. Our daughter went to Humboldt State University in California - what a small world - Humboldt must have gotten around in the world - or his relatives. There is even a Humboldt Street here in Bellingham, Washington. I've enjoyed going back over your other posts too.