History In A Quilt 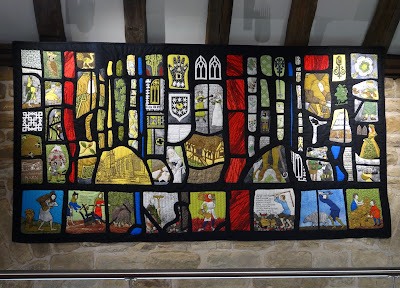 Last weekend our local History Group had a stand at Dronfield History Fair which was being held to highlight the recent rescue and restoration of Dronfield Hall Barn, a wonderful medieval barn that stands in the centre of the town. The Fair itself was held in a rather uninspiring Victorian building which was formerly a Methodist Chapel but is now used as a community centre. Since there were four of us on the stand we were able to take turns to go across to the restored barn and see the Dronfield Heritage Quilt which we had all heard of but none of us had actually seen. To be honest I wasn't expecting anything very wonderful but it turned out to be a real gem. It was made over a period of twelve months by a group of about 30 ladies (at least I think they were all ladies!). The theme of the quilt was the medieval history of Dronfield. Inspiration for the colour palette and design came from fragments of medieval glass from the original East Window of the parish church. At some point in the past these had been gathered up and used to form a border and three roundels in one window and a kind of jigsaw of random pieces that had been set into a second window. 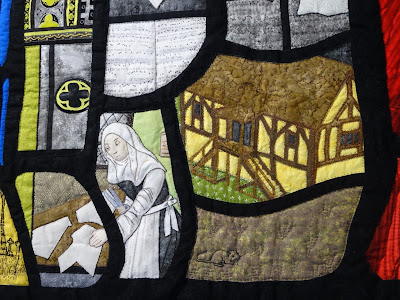 The effect of the whole quilt is that of a stained glass window, this little panel shows the barn as it would have looked originally and a woman cutting cloth to make a garment. In fact the barn was originally built as a Hall or small manor house for the agent of Lady Alice Deincourt who had leased the Manor of Dronfield in 1406 and held it until her death in 1433. 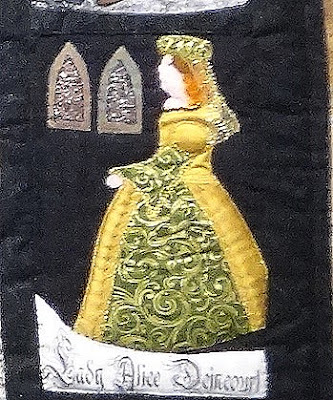 Here is Lady Alice, she was a wealthy woman and connected by birth to two of the most powerful families in the North of England at the time - the Nevilles and the Percys. She spent a great deal of her time at court as she was was governess to Henry VI who became king in 1422 when he was only 9 months old. Lady Alice probably never spent any time in Dronfield at all as her main estates were in Lincolnshire. 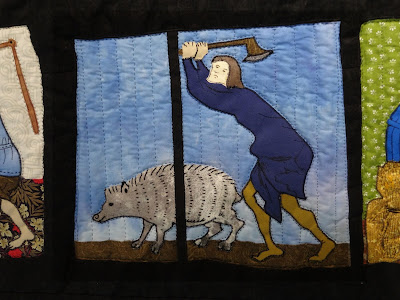 Dronfield was a very rural parish and the quilt illustrates many of the seasonal activities connected with farming including this one of a pig about to be dispatched with an axe! These images are taken from contemporary illustrations of The Labours of the Months. 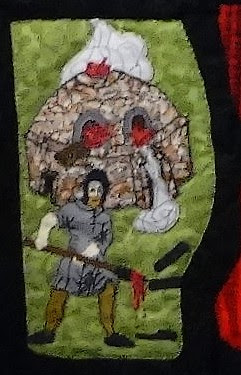 This illustrates another important aspect of medieval and Tudor life in Dronfield and in fact in the whole of this area - lead smelting. Lead has been mined in the limestone areas of the Peak District since Roman times and probably earlier than that. 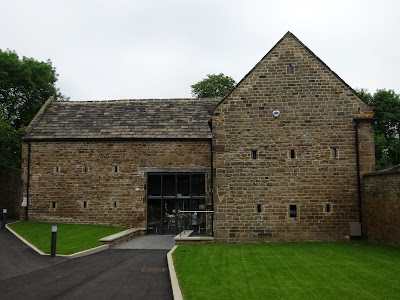 Dronfield Hall Barn as it looks now after its restoration. It was converted onto a stone clad barn in the early 18th century. I gather that eventually at the back there is going to be a garden filled with plants from the medieval period but this is still a work in progress. The quilt actually shows several medieval medicinal herb plants, in fact the more you look at the quilt the more you see - a tiny plague rat for instance because this of course was the era of the Black Death. 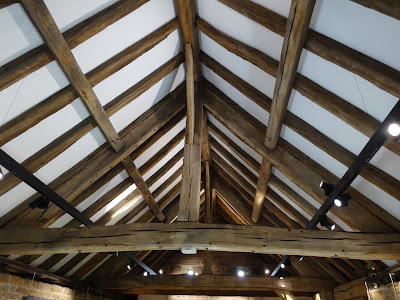 The interior of the barn's roof, the original building was a box frame with a king post roof. All the beams are original apart from two which had to be replaced. However the replacement beams are of the same age (1430) though they came from a barn in France that by a happy coincidence was being demolished at just the right time. 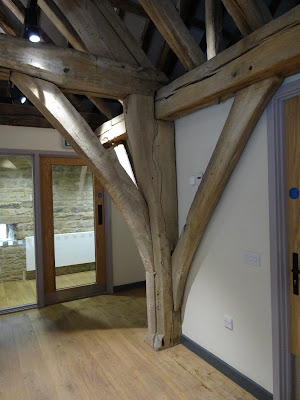 This is the only surviving original principal post which supported the medieval roof structure. Dendrochronolgy puts its felling date at 1430 and as oak was used unseasoned it dates the original building pretty accurately. 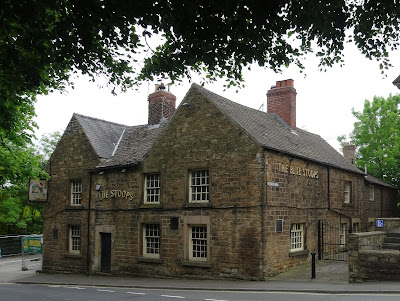 The Blue Stoops is almost as old as the Hall Barn. It was built in 1596 as an inn and has served that purpose ever since although sadly it appears to be closed now. Apparently the name comes from the custom of painting the door posts blue to indicate to travellers that it was an inn. 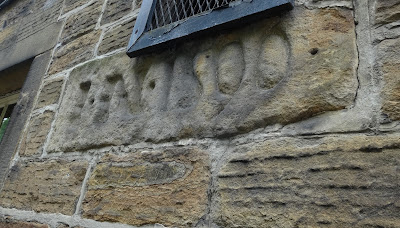 This datestone is on the front wall of the Blue Stoops - I can't believe that permission was given to place the extractor fan right over the top of it though! As a result the 6 looks like a 0 but in real life it's possible to see the upper stroke of the 6. 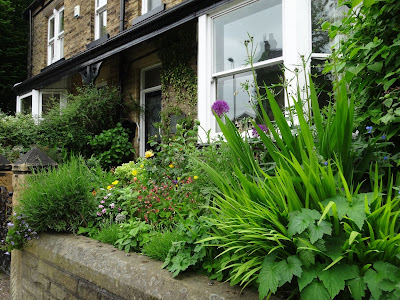 A pretty little cottage garden caught my eye as we walked back to the car. In case you are wondering why our history group was involved in an event at Dronfield - until 1844 both Dore(where I live)and Totley(which has the history group)were part of the parish of Dronfield and there are many graves in the churchyard of people from what were then these two small Derbyshire villages.
Posted by Rowan at Monday, June 13, 2016

How interesting! That quilt is fantastic.

I always find medieval barns and tithe barns interesting. What a wonderful quilt!

They've certainly captured the magical colours of stained glass; from your pictures it's difficult t believe that it is a quilt and not a fragment of a church window. There's so much of great interest in this post.

What a lovely old barn and I love those beams. They seem to have restored it sympathetically. The quilt is also beautiful and clever in how it has been done very appropriate. The cottage garden looks good too.

What a wonderful quilt and it does look like stained glass. The barn looks wonderful too with such a fascinating history. We have some friends who live nearby at Holmesfield and we are planning a visit to them next month so I'm hoping the quilt will still be on display then:)

What an amazing quilt. It tells the story so skilfully and the colours are so vibrant.

Interesting about the blue door posts indicating an inn.

What a superb quilt and such a lovely building. It is so good to see history being celebrated. I wish we had more of historic interest nearby.

I am not a huge fan of modern quilts, but this one really has managed to beautifully capture the subtle glow of really old stained class, without being garish.

But that extractor fan...what were they thinking of???

What a FABULOUS quilt! At first I thought it was a stained glass window, in fact, till I read your piece. Interesting to read about Dronfield. I lived in Chesterfield years ago and the bus to Dronfield went past our road but I never caught it and never saw the place. I wish I had now!

A fascinating post. What an amazing quilt - so much skilful work went into that and I just love every bit of it! I don't think I've heard of Dronfield at all but what an amazing barn. Just up our street, so to speak!